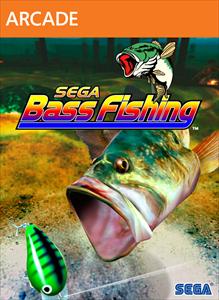 Overview
Originally released as an arcade game in 1997, SEGA Bass Fishing has come a long way to finally make it to the Xbox 360 Live Arcade. In 1999 the game was made for the SEGA Dreamcast and was compatible with the SEGA fishing controller for more immersed play. And here I am today expressing the joys of a game that has had a long journey. Let’s catch some bass!

Gameplay
So I have the mentality to just jump into games without looking over the controls. This was my first mistake playing SEGA Bass Fishing. Understanding the basics is key in order to perform well with different lures and ultimately reel your fish into the boat. Casting placement is done by moving your left analog and casting with the (A) button. Once the lure is in the water, you must create movement in order to attract bass.

The unique aspect about reeling is there four different ways to reel in. A slow reel can be accomplished with the right bumper while the left bumper offers a quick jerk to line. Using the right trigger provides a consistent pull and lands average bass without much effort. However, the ultimate fun factor is utilizing the right analog as the reel. By rotating the right analog in a circular fashion, you can reel a fish in at your own pace. I prefer this method whenever I take on a size-able bass over 10 lbs. There may be a sore spot in the middle of my palm, but that catch was worth it dang-nab-bit! 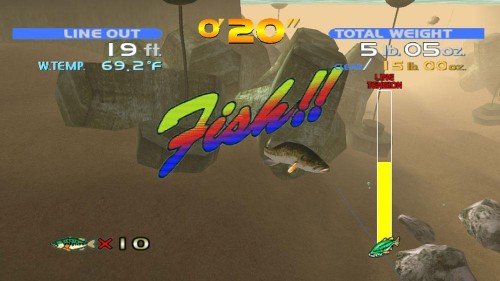 Looking through the modes, I felt that Practice Mode was most suitable for a fishing novice like myself. You are given an unlimited amount of time to catch as much fish as you can handle. This mode allows you to test your bass catching abilities with each lure without crunching down with a time limit. Keep in mind that time is a very, very important factor for the rest of the game.

Once I caught my first ten or so fish, I felt I could handle the Arcade version. Well, I soon realized how very wrong that notion was. This version is very fast paced and requires consistent casting and catching bass – preferably larger ones. The player starts with only one minute and thirty seconds to complete the 1st stage. Only by acquiring 11 pounds worth bass may the player advance to the next round. If the time limit expires, a continue selection is available. After playing through 3 stages with or without continues, the Arcade version is completed. Sadly, the overall time is not tabulated into the online leaderboards which would have been a unique statistic. 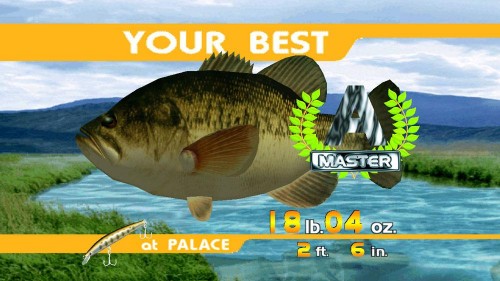 Upon further investigation of SEGA Bass Fishing, I found there was an Original mode that plays through as a sequence of tournaments (Amateur -> Challenge -> Professional -> Masters). Initially I thought that this tournament style was really tough. Being a novice I did not know the best lures for certain fishing spots. Also I was still getting use to the controls not knowing you could reel in most fish with out worrying about the line breaking. The Amateur Tournament allows the player to catch an unlimited amount of fish – this was my first mistake. I continually tried to catch the bigger fish while avoiding the smaller ones. The small bass add up quickly especially if you can reel them in fast. Both Professional and Masters have catching limits and only count the highest weights. This is when you avoid catching smaller bass because the overall weight is limited and ounces could push you up in rank. 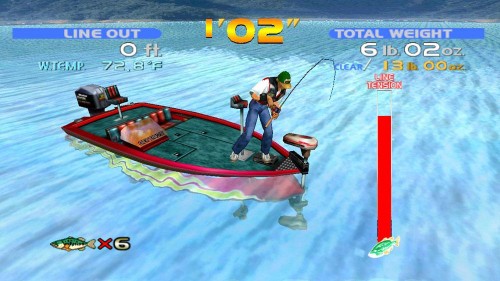 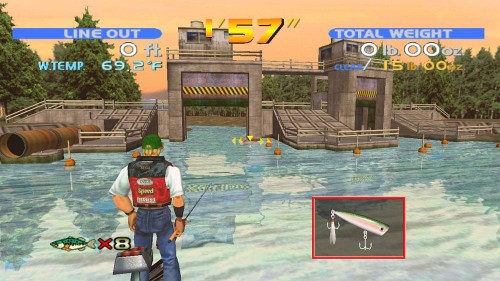 I can only muster up a couple negatives for this spectacular fishing game. First off, you cannot drive your fishing boat! Moving the boat to the left and right does not count nor realistic. When I am on a boat I want it to move while I play Lonely Island’s “I’m On A Boat”. I also felt that only the bigger fish offer competitive fishing because you can just hold down on the right trigger for most other bass. However, this works towards the player’s advantage in all game types.

Visual/Audio
Discussing the graphics we must state that this is a Dreamcast title ported to the Xbox 360. Now the graphics are not great by today’s standards, but games today won’t look as polished in 10 years. Zoning myself into the SEGA Bass Fishing world was not hard to do when the gameplay was intense and addicting. Not only that but I began to feel the burn on my palm when I was reeling the big suckers in. Whether you are casting into a waterfall or the ruins of a palace, you are always looking around the environment to find the big one.

The in-game audio becomes important when dealing with lures that require you to make a sound. The popper for instance requires a certain movement that makes a “pop” noise to attract fish. Without the sound effect, you may feel discourage when you see that fish are just not interested. 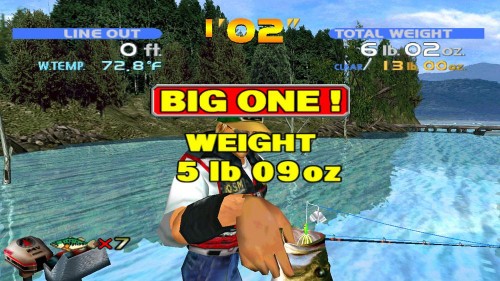 The voice overs help out the player by discerning big bass. When you manage to snag a bass, a voice may tell you: “It’s a big one”. This hint lets you know that you will have to be careful when reeling in because your tension may break the line.

Overall
Offering addictive gameplay in all modes, SEGA Bass Fishing exploits the fun factor in fishing. Normally gamers would pass up the opportunity to play a fishing game, but they should NOT here. Simply one of the best fishing games I have ever played, SEGA Bass Fishing will keep you and your friends entertained for hours.