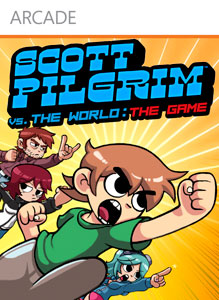 Story
“Scott Pilgrim vs. The World: The Game™ is the rock ‘n’ roll action love story for the eight-bit generation. Staying true to the graphic novels and upcoming movie, the game follows Scott Pilgrim’s quest to date Ramona Flowers by defeating her seven evil exes.

The game is an arcade-style beat ’em up inspired by many classic retro games of the ’80s and ’90s. It features a four-player co-op mode where you can fight alongside Stephen Stills, Kim Pine, and Ramona to kick, punch, and beat your way through hordes of hipsters, emos, paparazzi, aliens, flying piggy banks (yes, flying piggy banks!), and much more.  The eight-bit retro-gaming animations were created by the world-famous Pixel Artist Paul Robertson and the game features a soundtrack by chip-tune rockers Anamanaguchi.“ [Via Xbox.com]

The story is straight forward. Scott loves Romana but must beat her evil ex boyfriends in order to be with her. Scott must beat the living lights out of everyone in your way, and beat the evil ex boyfriend at the end of every stage. Sound easy? Well, you are incredibly wrong.

Gameplay
The game plays like a standard Beat ‘em up game with an added RPG element. As you go through the levels beating everyone up, you will gain levels which earn you bonuses in strength and health as well as give you new moves to use. The RPG element is a nice touch to this Beat ‘em up game and makes it incredibly more fun than a normal Beat ‘em up game. Still, like any other Beat ‘em up, the entire goal is to beat up everyone. Luckily you get to pick up objects and use special powers to help you succeed

The game also supports 4 player local co-op. It would have been awesome to have some online support, but sadly there is none. The game actually seems to favor co-op play, as it is incredibly hard to actually beat the game by yourself. There are four players to choose from, and while you will all help each other beating up the enemies, you will still compete for a good amount of the gold that is dropped. By yourself you will by replaying levels over and over again as you grind for experience and money, but playing with friends lets you beat it all with a little bit of effort while having a lot of fun. There are four characters to pick from, plus a bonus character to unlock (also a rumoured 6th character that I cannot confirm).

Money is dropped by every enemy in the game. As you collect more money you can enter stores and buy upgrades, food, and snacks. Buying stuff is a must in this game. Without the upgrades, and snacks you will die a quick and horrible death.

There are three difficulties, but they are all pretty difficult unless you level up quite a bit. The sheer number of opponents and their cheap moves create an incredibly annoying experience for newcomers. There is also, for some reason, an incredibly long recovery every time you fall down. At first the game may take a while to get used to, but once you are used to it this game competes extremely well with many Beat ‘em up games.

Audio & Graphics
This game is almost held up completely by its audio. An odd statement for a non Rhythm game, but it is true. The audio in Scott Pilgrim Vs The World: The game is completely Epic. The chiptune music from Anamanaguchi is awesome, check out some more info at this article written by Chris and then look up some of their music on youtube; it truly is awesome.

The graphics are in an 8bit style, which oddly brought back memories of playing older games. A weird feeling occurred as I played. While I knew this game was new, it felt like I was playing an old classic game that I hadn’t played in a while. I feel the art style won’t work as well with the younger crowd, but as an older gamer I quite enjoyed the nostalgic feeling. The only complaint I had with the graphics is the bouncing cleavage. I don’t feel it was necessary to have every single female sprite to be bouncing their –er- assets. It simply was not needed.

Achievements
The Achievements in this game are hard. The achievements will require you to play this game a lot. There are a few easy to obtain achievements, but the rest will take a while. The easiest are killing the twins at the same time, buying everything in a store, and defeating the first boss without using a life. The rest will take a while, and will have you playing a lot. Luckily if you like beat ‘em up games you will enjoy this game (See rest of the review for reasons why… Yes, that was a plug for my review within my own review)

Overview
While this game is most likely based off of the movie (sorry book fans) the game is still a lot of fun. This Beat ‘em up game is enough of a beat ‘em up to please fans of the genre, while adding a few additions to please a few newcomers. While the best part of the game is the music; the RPG elements and the graphic style create a new experience that is incredibly pleasant. The game is a cool beat ‘em up addition, but it sadly has no online play which hurts this game a lot. Would have it really have been that hard to support online co-op? Some good gameplay mechanics as well as an awesome Chiptune soundtrack makes Scott Pilgrim Vs The World: The Game a pretty cool game.
I give Scott Pilgrim Vs The World: The Game