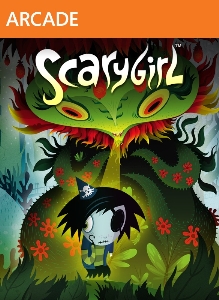 Scarygirl is a simple-looking sidescrolling platformer that seems to be very derivative of other titles with similar artworks. The game seems to have a very interesting way of playing that is both unique and reminiscent of earlier platformer style games from the past.

The story of Scarygirl follows the story of a girl who lives with this giant octopus dude. During her stay with the octopus, the Tree of Knowledge is threatened and it’s up to Scarygirl to go on a quest to save this tree. The story doesn’t deviate from this path too much, as is par with this kind of genre, and as such is a much more focused game. 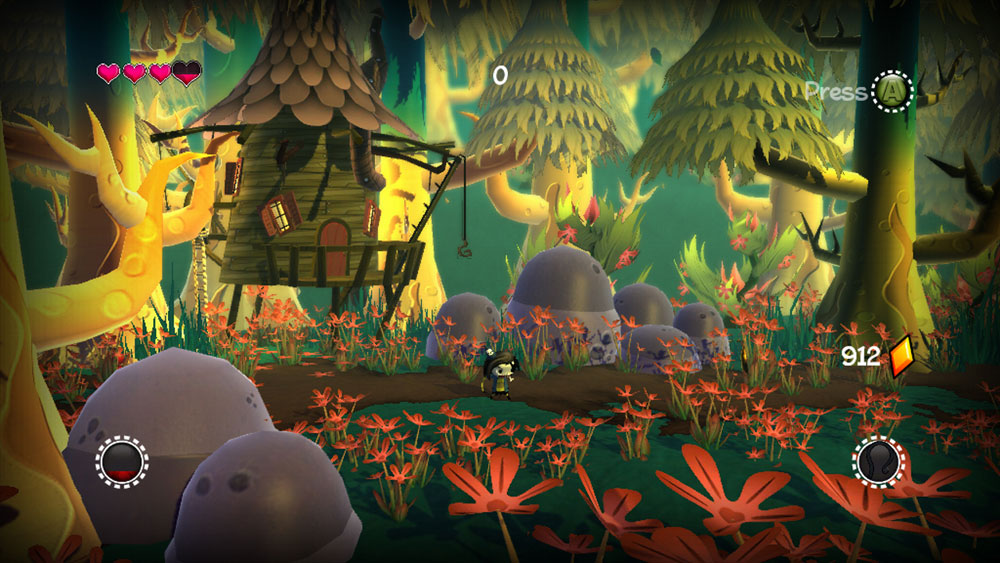 Throughout the story, you will meet a few interesting looking creatures that will sell you things or try to kill you, in fact, nearly everything in this story is directly related to the gameplay in some manner. And really for a game of this size, the story should only be relevant to the gameplay. You can not expect a platformer to have 50 hour epic plugged into it’s bowels, just the same as you wouldn’t expect a 50 hour RPG to have no story at all.

I think that this game was adapted from a comic-book and a series of toys, which would explain the amount of quirk found throughout the story. All the characters, even if they’re completely gameplay orientated in some way, have this unique and charming look and feel to them which helps feed the feeling of the game in its unique art-style that is reminiscent of other works that are similar in this kind of style. Stuff like Tim Burton movies and the like.

Scarygirl is like playing Earthworm Jim, in that it’s a sidescroller, you can helicopter around and you use a whip-like weapon to defeat enemies. What I liked about this kind of gameplay is that it lent itself well to the kind of game that this was. For instance, being able to maneuvre around the screen and having the ability to use my whip to fling from platform to tree to platform was kind of fun.

Much like any platforming title, each level gets sequentially harder as you go, and you will encounter a multitude of different enemies on any given level. While there is a variety of ways to kill them, and some are needed to be killed in a certain way, I didn’t find it too difficult to work out the strategies of each monster type, but then again, I don’t think any of the monsters were designed with video games in mind. 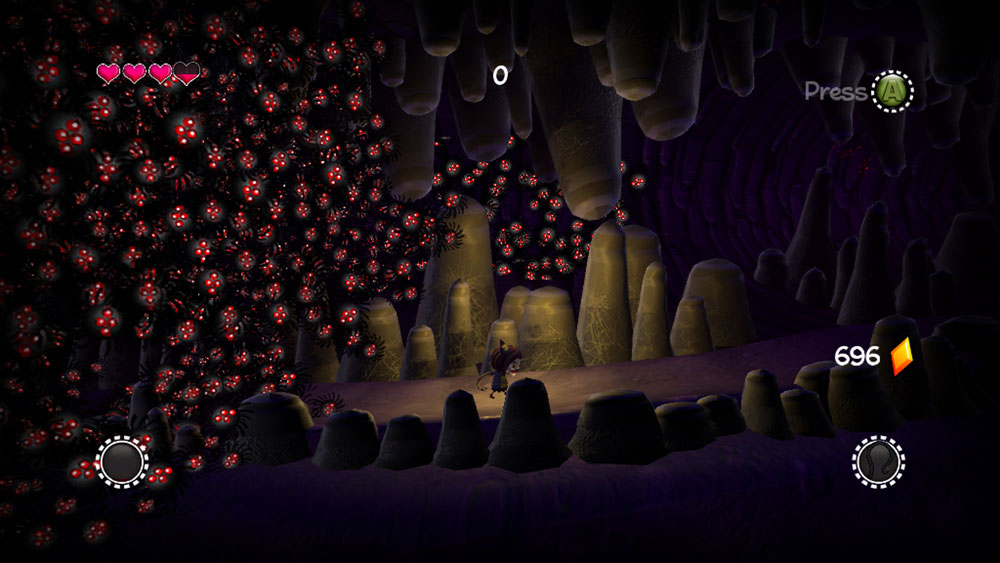 One cool mechanic in the game is when you fill up your rage meter. Filling up this gauge will allow you to transform into a much more Scary Girl that has the power to decimate large waves of foes and the like with ease.

From a gameplay perspective, Scarygirl is a lot of fun to play and as such, should be picked up by gamers looking for a fun platforming adventure.

Visually, Scarygirl has a fairly stylised look and feel to it. If you were to imagine something similar to Tim Burton’s works, you would be very close to the visual style of Scarygirl. And while I did have some minor gripes with the games graphical presentation, the game functioned as intended in the art department.

Now then my first gripe – Everything in this game looks like it was upscaled, rather than downscaled. What I mean is that the models and textures look like they were made for 720p in mind and were made at that level, rather than being made at much higher levels and scaled downwards. This gives everything this grainy look when displaying on a 1080p display, rather than a clear and pristine look that most other titles have. 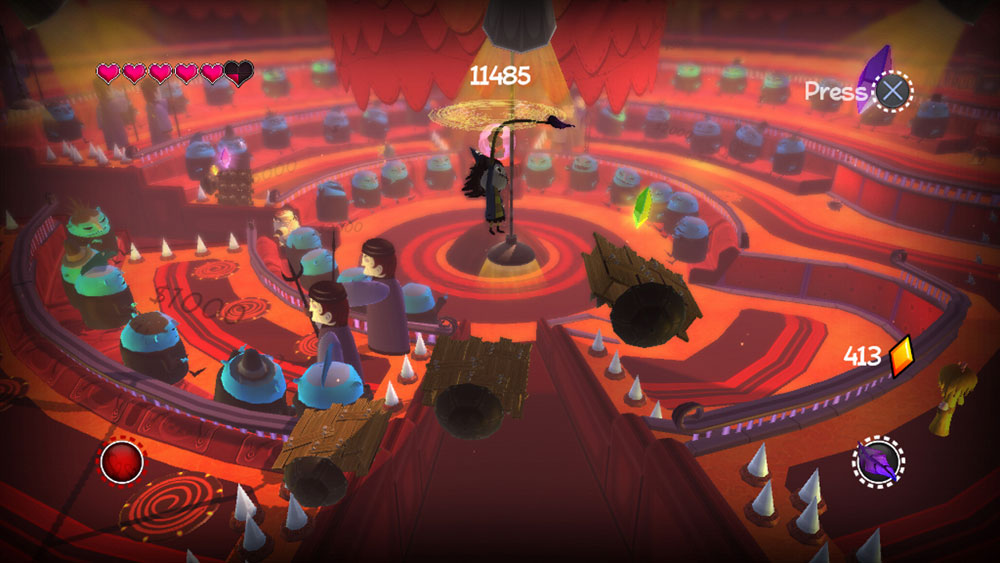 There was also an issue of what looked to be the copying and pasting of an asset from a completely unrelated game. Not that I’m saying it was, the effect most definitely is very much suited to the game and it is very highly probable that this is a very similar effect. But still, I can’t help but shake the feeling that this was reproduced from The Legend of Zelda: Wind Waker.

Other than that, the game has amazing visuals that suit the games gameplay and story completely.

Scarygirls soundtrack is very creepy, while also being very catchy. The background atmosphere is enhanced by the music and the ambiance playing throughout each level. Not only is there decent background audio, but there is also a plethora of sound effects and sound-bytes for characters speech. 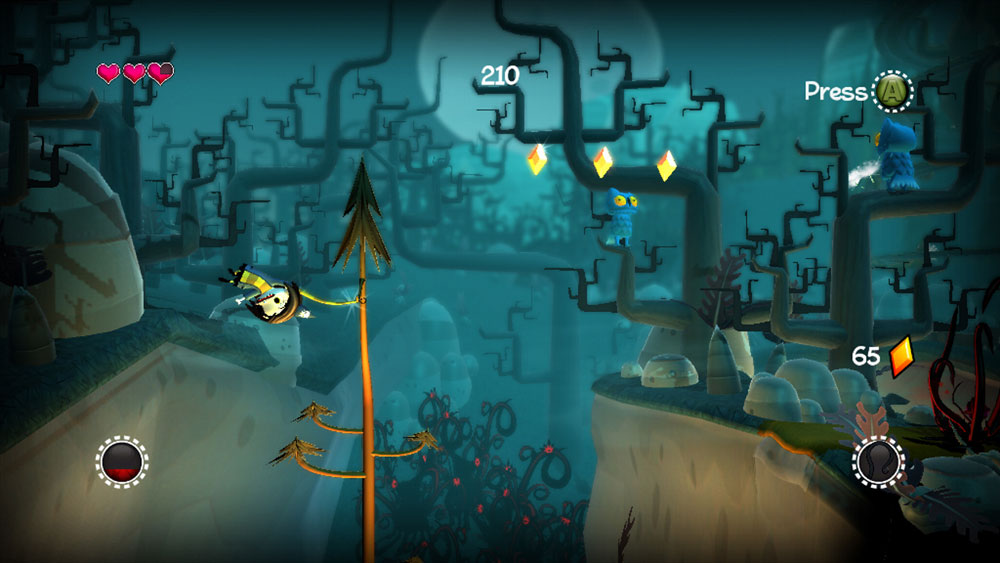 The voice acting is a pretty decent part of this game. It won’t turn you off the title, but it will also not be winning any awards either.

Scarygirl is one of the most stylish games I’ve played on the XBLA since Shank 2. Fans of the Tim Burton visual style and/or of the already existing Scarygirl merchandise will most definitely fall in love with this title. As a game, it definitely stands-up for itself and is something that can be played by almost anyone. So if you’re looking for a game that can be played quickly and has a decent art-style, Scarygirl is the game for you.