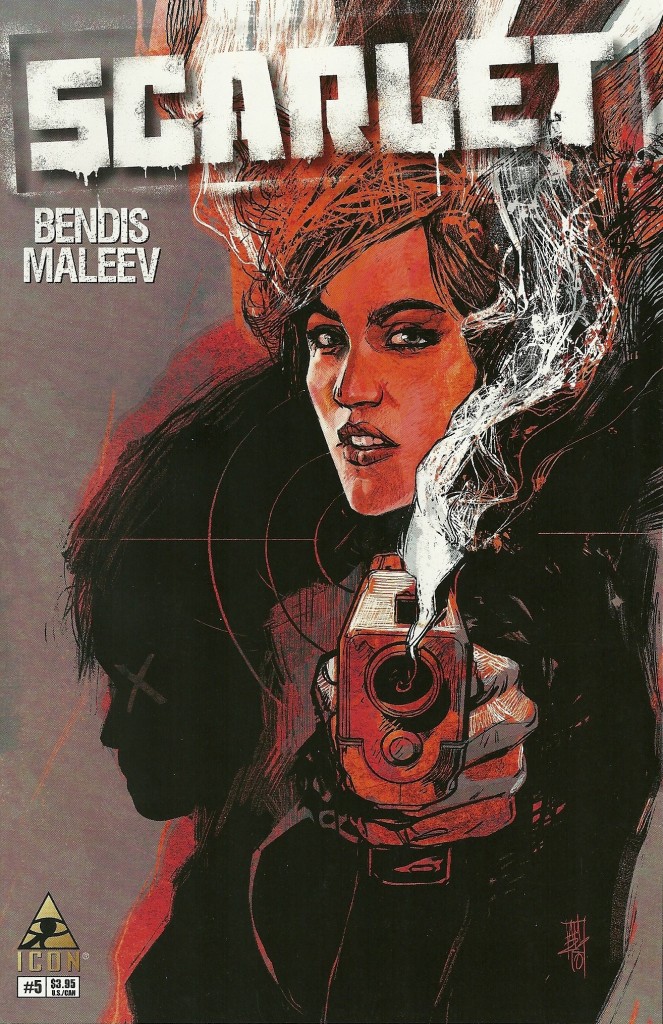 While the most popular comic books on store shelves are still those revolving around superheroes (seriously, there are more than 8 ongoing comic series starring Batman), Scarlet is a comic centered on a different kind of tights-wearing vigilante. I’m being somewhat facetious as my previous comment makes it sound like this is a story about some new type of superhero, when really by “tights-wearing” I just meant that our hero is just your average college-aged girl. Whether or not she actually wears tights is irrelevant; let’s just move on with the story.

Scarlet, our eponymous protagonist, is a young woman living in Portland, Oregon who has a problem with authority. Actually technically Scarlet’s problem is with corrupt authority: more specifically, police officers who have ceased to serve and protect the people. The premise of the series is that a terrible tragedy has befallen this once starry-eyed redhead and has propelled her along a path that most wouldn’t risk following. Scarlet’s boyfriend and first true love, Gabriel, is gunned down by a corrupt police officer and the whole event is reported by the media as a heroic effort by the police to rid the city of a teenage druglord.

The problem here is that Gabriel never sold any drugs, the offending officer wasn’t punished, and no one believed the truth. This is, in essence, what convinces Scarlet that the world is (in her words) “broken” and that something needs to be done. This is not a story of revenge, nor is it a story meant to brand all cops as pigs; this is simply a story about seeing through the bullshit and taking a stand against something. If you’re familiar with characters like V of V for Vendetta fame or Rorschach from Watchmen (both Alan Moore characters interestingly enough) then you probably have at least some idea of what our protagonist is feeling.

Scarlet begins a crusade to attempt to expose the corruption of the police to the people of Portland. She needs people to know what’s going on behind closed doors and she needs them to make their voices heard. For Scarlet, nothing short of a revolution will be enough to clean up her city, and that is precisely what she is hoping for. Portland is on the verge of an uprising thanks to Scarlet’s message, and both the police force and the FBI are working to catch this cop killing revolutionary.

There is bloodshed in Scarlet, although it is not the kind of super-bloodied action frenzy you would expect from something like Kill Bill. Like with most well-written comics, Brian Michael Bendis uses action and violence when it serves the story well rather than relying on it as a crutch. The real struggle in Scarlet is a mix between two conflicts. The first is the more obvious definition of the term: a young woman with no martial training attempting to stay out of jail and out of a coffin while taking down corrupt police officers. The second is her own inner struggle to  overcome the harsh reality thrust upon her when her naivety was shattered, all while trying to be a symbol to the people that things can be made better. 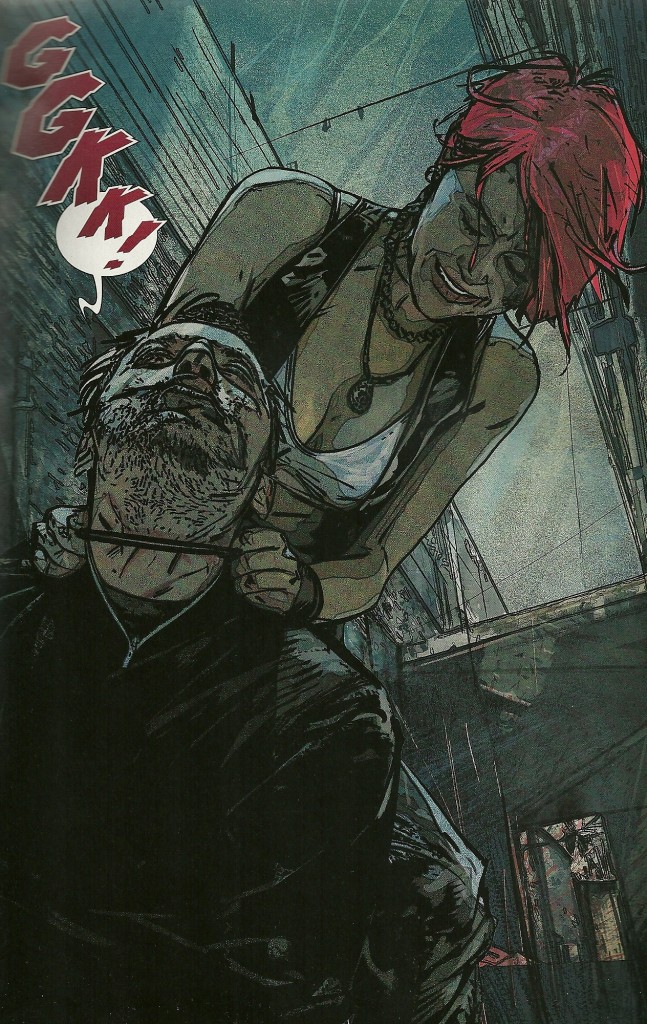 This is the image that greets readers on page 1 of Scarlet’s first issue.

Bendis’s writing is superb. I was going to continue that sentence with some qualifiers, but I couldn’t think of any that were necessary. Scarlet is a dichotomy, depicted as both a cute, innocent girl who has just had her happiness stolen from her, and as a steadfast dispeller of political placation and media misdirection. This allows for some profoundly meaningful inner monologuing by Scarlet, who will more often than not address the reader in an attempt to explain why the system doesn’t need to remain broken. While Scarlet frequently breaks the fourth wall like the fan-favorite superhero Deadpool, it is less for the sake of comedy and more as a call to action. Scarlet is showing her story to you, to all of us really, in the hopes that people will stand up for their rights. The writing can be very deep, but it always sounds natural for a girl of Scarlet’s age and is surprisingly not preachy like some other vigilante stories.

There are also several supporting characters such as Federal Agent James Daemonakos and Police Detective Angela Going, the two investigators working to try to find Scarlet. These characters, however, don’t have a very pronounced role in the story just yet. I assume that they will both feature more heavily as the story continues, but Scarlet is much more heavily focused on in the early issues. A much more literal “supporting” character is Scarlet’s friend Brandon, who was also best friends with her slain boyfriend. Brandon watched after Scarlet and aids her in recording and distributing her message to the people. While he seems hesitant to participate in Scarlet’s brand of justice, and doesn’t personally get his hands dirty, he won’t let her go through this alone.

The art is similarly amazing, which is no surprise considering it is both drawn and colored by Alex Maleev, whose work on Halo: Uprising (also written by Bendis) is what made me check out Scarlet in the first place. The photorealistic style is uncannily lifelike and I really had my doubts at first that Maleev hadn’t just applied a filter to photographs of a hired model in order to create Scarlet and the other characters. If you’ve seen photos of Mark Vanderloo, the model on whom Mass Effect’s Commander Shepard is based, then you’ll understand where I’m coming from. The color is gritty and often washed out, much like you would expect to find in a story set in an unnamed grimy cityscape, with a splash of bright color here and there, especially in the case of the crimson hair of our aptly-named protagonist. 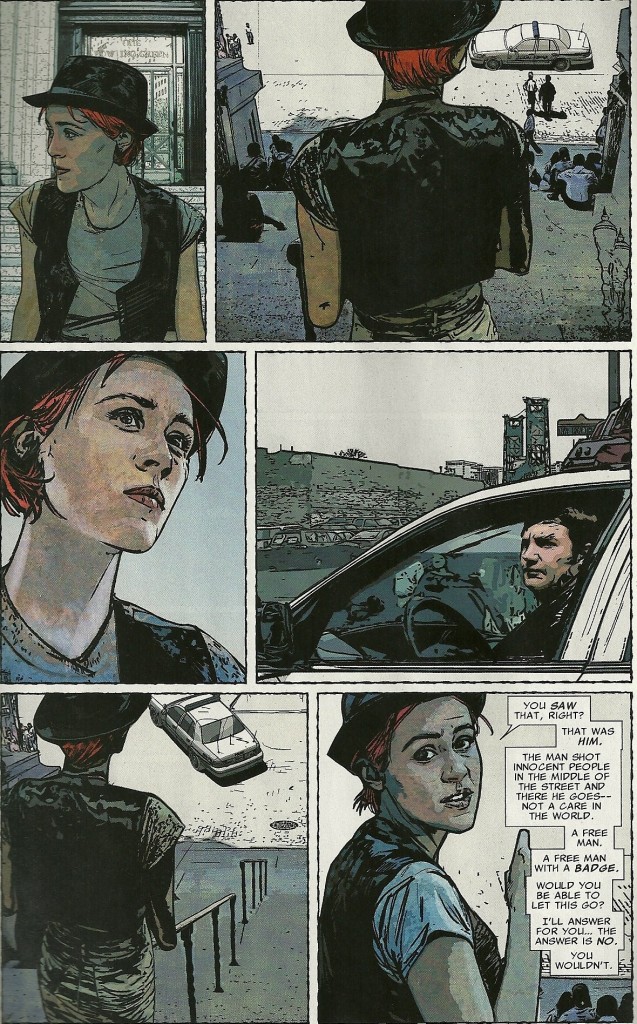 It is easy to forget that Scarlet Rue isn’t a real person thanks to Alex Maleev’s artwork.

One of the few criticisms I have about this series is that while Scarlet herself is impossible to miss thanks to her previously mentioned red hair, some of the other characters can be a bit difficult to distinguish between. I mostly encountered this problem with the police detectives and agents working to try to stop Scarlet and I would often need to flip back a few pages to remind myself who I was looking at. This isn’t helped by the fact that new issues of the comic only land on store shelves on a bi-monthly basis.  To avoid confusion, allow me to clarify that this means that you can only get your hands on more Scarlet once every two months, and not twice a month as bi-monthly can sometimes mean.

While this is understandable due to Bendis and Maleev’s work on other ongoing series, it does make it difficult to remember what happened in previous books by the time a new issue is released. I found myself rereading each previous issue before starting a new one, and I didn’t really mind this as I greatly enjoy the series, but some might find it tedious. For those people, I would probably recommend picking up the trade books which will collect several issues at once. The first of these volumes will be released this coming July and will contain issues 1 through 5, which makes up the first story arc of Scarlet.

I would most assuredly and very enthusiastically recommend Scarlet to anyone. Whether you are a comic shop veteran or an outsider to the medium of sequential art, this is a great series to get into. Because it only started in 2010, there are only 5 issues to catch up on currently so there is much less backstory to read than in some of the longer running franchises out there. The more realistic nature of the story also probably makes Scarlet more accessible to potential readers who may be turned off by the inherent silliness of superhero comics, so this may be a good way to get reluctant friends (or you if you’re similarly reluctant) into comic books in general.

Thanks to its stirring take on vigilante justice and the teamwork of Bendis and Maleev, Scarlet (#1-5) gets: