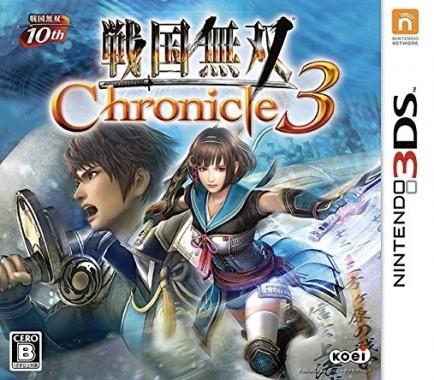 Overview
Good ol’ Koei Tecmo know how to please their fans. Even though we just received Samurai Warriors 4 not too long ago for the Vita and Playstation 4, Samurai Warrior Chronicles 3 has landed on the Nintendo 3DS and Vita, mainly existing to please some Nintendo fans wanting more from the beloved franchise. Honestly, I think it is a good move as while the Vita did get a “prettier” version of the same series earlier this year, it isn’t too often when the 3DS gets a title from the Warriors line – which seems to be changing in the other direction as we move forward. With some new features and customization, how does this title fare? Let’s find out. 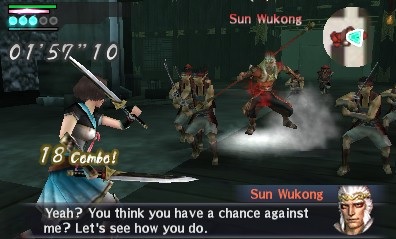 Story
The story in Samurai Warriors is honestly not a huge factor for the title whatsoever. Like all titles from the same line, this one places the player in the period where multiple empires are at war, with a ton of dialogue inserted to move the plot forward. When I say a ton, I truly mean a ton as this may very well be the most conversational cast to come to a portable Warriors game. Of course that is a good thing for players looking to soak up the lore, but for the most part you play a simple soldier who is just part of the action, rather than a focal point. Sure, characters respond a bit to your character differently if you pick a male or female – but don’t expect to feel like more than a foot soldier set among more famous allies.

Gameplay
The gameplay is what truly matters and thankfully- fans will be happy to know that this installment does well in terms of performance. For the most part, the controls are on par with the Warriors titles of the past, allowing for some quick hack and slash gameplay that Koei has seemed to master on consoles over the years. Of course this is a Chronicles title and is a spin-off of Samurai Warriors – intended for portable platforms, so expect a bit less overall in terms of upgrades and depth that a console version may have. Now I know, Samurai Warriors 4 was on the Vita – but I played this on the 3DS and that Vita version of 4 is simply a port of the Playstation 3 version. I am not trying to make excuses for the shortcomings of Chronicles 3, I just feel it is important to have a full understanding of the intended audience and purpose of this lightweight title before players decide to pick it up. 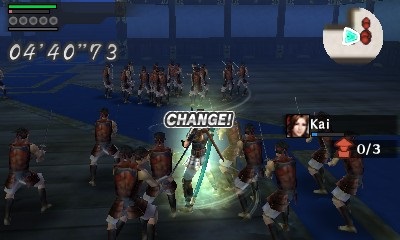 Getting back on track, one of the finest features of Samurai Warriors Chronicles 3 is the customization. Right at the start, players must create a character to their liking to take to the fields. The creation tool is actually rather complex and surprised me a bit, as you can even change the tone and general shape of your character. I know that sounds rather silly to compliment, but I find it kind of nice when developers let players use their full imagination – meaning you can be as serious or offbeat as you choose to be. A returning feature that has been improved upon is the ability to switch heroes during battle. Now players can simply tap their icon on the map and instantly get a new perspective without having to make a long trek. Its convenient and a great use of the touchscreen controls, streamlining the action for further simplicity. Speaking of touchscreen – War Arts are new abilities for warriors that improve the odds during battle. This isn’t a game changer by any means, but it was nice to see a little option come in handy during some of the earlier portions of the game. 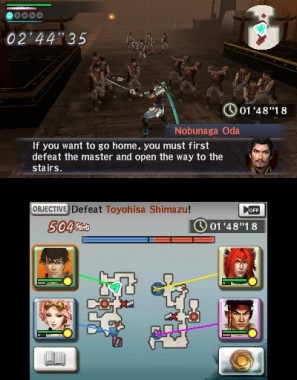 I may have made the upgrading mechanics seem a little weaker a moment ago compared to other Warriors titles, but that doesn’t mean that the system in place isn’t well crafted. Chronicles 3 features three different shops that can be upgraded by investing gold. The further the upgrade, the better equipment you can get as the player as a whole (or better parties via the tea house). The game does give a lot of currency after each mission as well, and that is where things become a bit of a mixed bag. It is easy to level up and upgrade and ultra convenient. However, you can easily become overpowered and take a lot of the challenge away unless you switch to the default characters of the current campaign mission. Sure, there are difficulty settings that can attempt to balance this, but even with that its only a matter of time before you literally hack through everything in sight without any qualms. 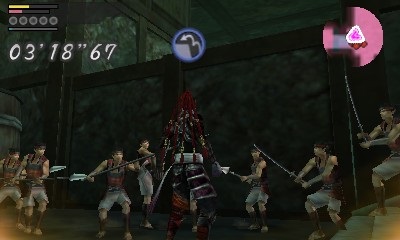 Challenge Mode is kind of like “Let’s Make a Deal” of the Warriors world here. Players do missions such as reaching checkpoints and taking down opponents throughout – but eventually will have to choose if they want to move on or take the rewards collected before moving onward after defeating a boss. Its a fun offering that provides a ton of extra gameplay on top of the main campaign, and can easily become a great time sink. If I had any gripes about Samurai Warrior Chronicles 3, it would have to be the camera – which is something I fought with regularly with the 3DS version. At times I would have a piece of the environment in front of my character and the batch of foes I was fighting, and if it was not a hack and slash – that very well could have caused a problem. Of course being able to see my character is something that I feel is needed – and hopefully in future portable versions Koei can fix this frustrating camera issue for the 3DS.

Visuals
When I first saw the character model in the creation mode and watched a few of the cutscenes, I was honestly impressed with how great the models looked. Shortly after, that kind of wore off as this title is not that pretty in general while you are actually playing the game. While the frame rate is stable and animations are fluid (which is a big deal when you have so many enemies on the screen), the visuals are kind of muddy and the models look severely dated, even by 3DS standards. The cutscenes look fine, but the dialogue sequences seem like two png images that have been plastered on a background so players get a crisp 3D image if they have the slider up. Sure, it does look ok then, but if you choose not to use 3D – it looks cheap and kind of hurts the overall presentation. 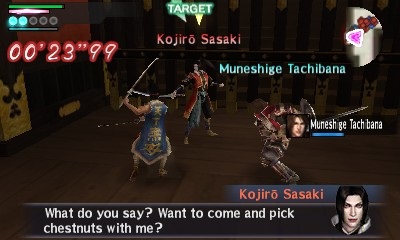 Audio
The sound is well done. Sure, the dialogue may be in Japanese, but subtitles are very present and most fans of the franchise will be just fine with the lack of English voice actors. The music is also well done – but not very memorable overall. That is more of a personal opinion about all of the Samurai Warriors titles though, as while I have heard praise over the soundtrack, I feel it is more of just themed tunes that are used to solve the lack of noise. Either way, it is a complete package and at least fitting – so no complaints here.

Overall
Samurai Warriors Chronicles 3 is a great addition to the series and more than welcome in the west. Sure, it is not as good as other portable entries – but it brings more of the same satisfying combat and mission structures that keeps this franchise’s heart beating. Sometimes all a portable spin-off has to do is merely tackle the concept correctly to be deemed “good”, and for what its worth, Chronicles 3 is more than enough to appease our appetite until something greater comes along.