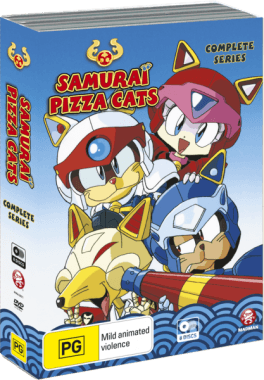 Speedy Cerviche, Guido Anchovy and Polly Esther are the Samurai Pizza Cats. These anthropomorphic animals have a day job as waiters and delivery cats at their pizza emporium, but they are also the town’s resident samurai superheroes. Unfortunately, they tend to end up getting into trouble when they try to save the day, so they almost always have to call for assistance. Their enemy is the Big Cheese, who generally explodes after one of his plans fails. 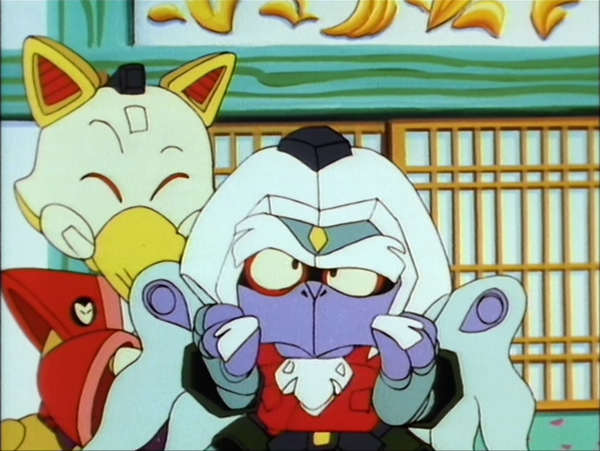 Two common features of scripts for this kind of anime adaptation are alliteration and rhyme. Those techniques are rarely funny in these adaptations, but it does show that the scriptwriters have at least put some thought into the scripts. Unfortunately, they try their best to ruin the scripts by filling them with contemporary pop culture references and incessant self-referential comments. Breaking the fourth wall does not just happen once in any given episode; it happens multiple times in each episode. It was not funny the first time, and it was not funny the 40th time. Some jokes are also offensive by today’s standards. Fortunately, there are few positive elements of the script. For example, the writers do effectively make a surprising amount of political, moral and ethical points. Some of it is still relevant, as opposed to the pop culture references, which will likely be obscure to anyone who did not grow up in the 1980s. The references are specific to contemporary North America as well, making understanding the script even harder for other audiences.

Each episode follows the same pattern. The Big Cheese and Jerry Atric work on a dastardly plan, a giant robot shows up along with Bad Bird and the ninja crows, the Pizza Cats are deployed, they run into trouble, get saved, finish their mission and then go home and ignore the real world implications of the massive destruction that has been caused either by them and/or the Big Cheese. Speedy and Guido are constantly fighting over their friend Lucille and often fail to complete their deliveries as a result of their attraction to her. They ignore their colleague Polly, who is nearly always in a state of anger, and exhibits characteristics reminiscent of the tsundere archetype. She is violent on the outside, but does care about love on the inside. They also do not appear to care much about Francine, the cat in charge of Pizza Cat dispatch. She has almost no character outside of her love of rhyme, and is only rarely the focus of a scene or episode. The Big Cheese likes making money and trying to defeat the pizza cats, but he also frequently engages in cross-dressing. All of the characters have just one character trait, maybe two on a good day. This two-dimensional nature makes it hard to identify with the characters and also makes it hard to like certain characters, such as Princess Violet. It does at least mean that you can watch just about any episode and know exactly what you are getting into. Samurai Pizza Cats is a one-trick pony that, if nothing else, is consistent. For that, it does make for decent afternoon entertainment. If you get through enough episodes, you may even come across one that presents a well-written plot and evokes real emotions. 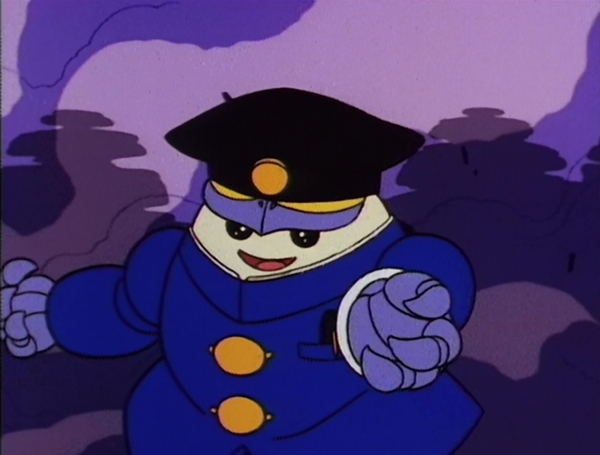 The quality of the video is reasonable for a DVD release of a children’s anime produced in 1990. There are a few issues, which may be due to the transfer process, but it is about as good as it is going to get. There are a large number of cuts made to probably every shot in every episode, and the episodes get shorter after the first three discs. One thing that stands out about Saban’s adaptation is that the Japanese characters are left on screen. Only 4Kids Entertainment consistently painted Japanese characters out of the shows they adapted, but Saban Entertainment does not appear to have made any attempt to paint over anything. The Japanese name of Lucille is left on-screen, as is the Japanese word for ‘tobacco’. It was acceptable to discuss tobacco on western television back when this adaptation aired, but it is surprising now to hear tobacco actually mentioned in an episode later on in the series. Long episode previews are featured before the credits of the first twenty episodes, but this segment is abandoned from episode 21 onwards.

One of the main features of this series is visual gags. There is an awful lot of slapstick ‘comedy’, which does not actually end up being funny in any way. Another recurring gag is Francine’s almost constant inability to send the Pizza Cats in the right direction, often instead sending them flying headfirst into a building or other solid structure. Yet another annoying recurring gag is Lucille’s bizarre ability to shoot off a bunch of missiles from her head whenever she experiences a strong emotion. The animation is consistent, at least, and if there is one thing about this series that makes it worth watching in this day and age, it is the traditional animation used for this series. It may not be the best animation, nor are the character designs memorable, but it is nice to be able to watch an anime series produced the traditional way if nothing else. Of course, with traditional animation comes a large amount of recycled footage, although this is less annoying and more understandable than the visual gags. 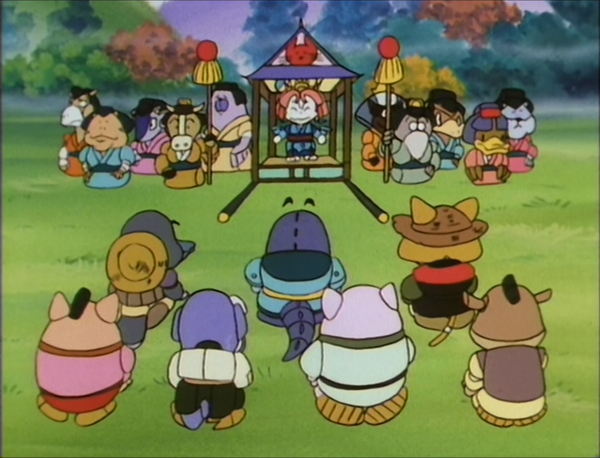 The North American music in Samurai Pizza Cats feels as if it was composed on an average 1980s synthesiser. Some of it is somewhat effective. However, for every piece of music that does feel suitable, there is also a piece of music that does not belong at all. There are a few moments here and there that are musically silent, but they unfortunately do not last long at all.

The voices are basically the same as the voices found in any North American animated series produced around this time. Speedy’s voice is reminiscent of Bugs Bunny, Polly sounds like she is from New Jersey, and the rest of the cast could just as easily be from the western Sonic the Hedgehog cartoons produced in the ’90s. If you can overlook the obvious fact that this is a Japanese series, the voices fit to a certain extent. The series is so random and stupid that it ultimately does not matter what the voices sound like or what background music is accompanying the action, however; Samurai Pizza Cats is a somewhat entertaining blast from the past that has little meaning or value outside of potential nostalgia for some viewers. 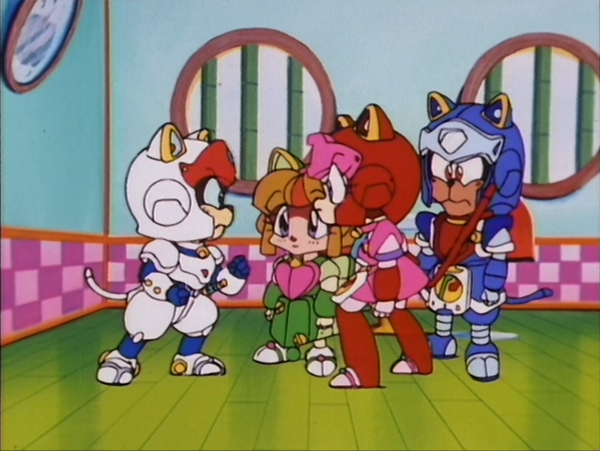 Samurai Pizza Cats is crazy and stupid. Not just a little bit, but extremely crazy and stupid. There are a few moments that are genuinely funny. Many of the jokes simply make you think rather than make you laugh out loud, or at best elicit a short ‘ha’. A lot of the ‘jokes’ are so terrible that they do not even deserve a pity laugh, but that is not a surprise given that this heavily-edited English adaptation was produced in 1991. In fact, everything about Samurai Pizza Cats says ‘1991’. It can be entertaining, but this release is best suited to only those who watched this series as a child and are in the mood for a nostalgia kick. If you are nostalgic for heavily edited adaptations of anime in general, or nostalgic for the humour of the early 1990s, you may find something to enjoy in this release. It has a lot against it on paper, but it is not the worst piece of mindless entertainment that is available on DVD. This strange series has a certain, albeit weak, charm that cannot be replicated in this day and age.