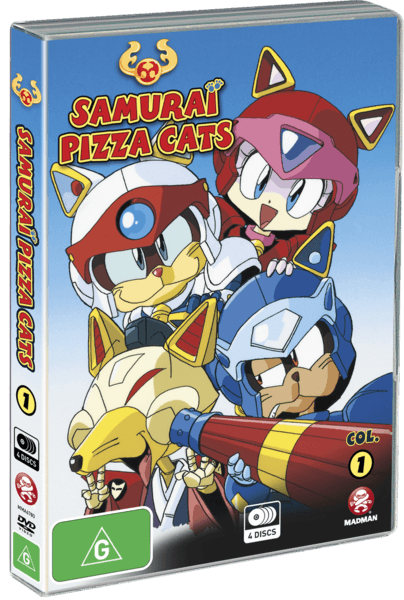 Overview
I take you back to a time of poor communication and mixed messages. A time when English dubs really didn’t have to be true to the Japanese original. Straight from this era I bring you the illustrious, the incomparable…the ridiculous Samurai Pizza Cats. In a world of  semi-robotic, chibi animals, these heroes of justice and authentic Italian cuisine will save the day with a serving of sarcastic witticisms to go. Plus they’ll be there in three minutes of less…or justice is free. 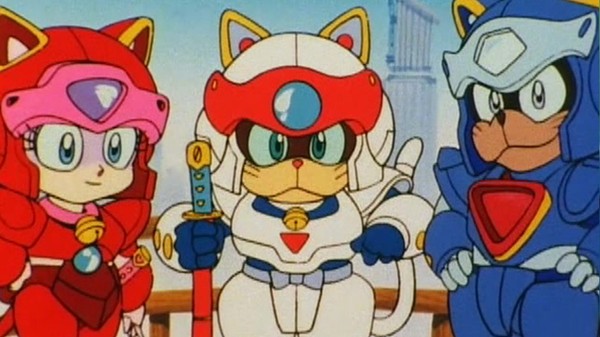 Pizza is their middle name

Story
Set in the city of little Tokyo, Samurai Pizza Cats features a quirky cast of cybernetic anthropomorphic animal citizens who dwell within this cultural blend of Feudal Japan and pop culture. Led by Princess Violet and a city council, the town is plagued by evil schemes perpetuated by none other than the Prime Minister Seymour “The Big” Cheese. Constantly plotting to take over Little Tokyo Cheese, along with his bumbling minions Jerry Atric and Bad Bird, he is stopped every time by the stars of the show: The Samurai Pizza Cats.

The series follows a typical monster of the week formula. Each episode, Cheese cooks up some ridiculous plot, that the Cats need to stop, and employs his slew of bumbling subordinates to aid him. Apart from regular Bad Bird, some type of robot is also thrown at the situation, though they usually end up sliced in half by episode’s end. With their scheme foiled, the baddies retreat until next episode when they try it all over again. 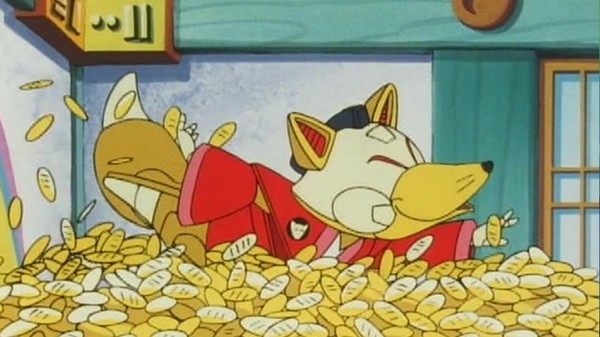 Alright, now that the “plot” is out of the way we can talk about the main factor of the series: humour. Not just any type either, Pizza Cats is a chaotic, rapid-fire onslaught of pop-culture references, self-deprecating medium awareness and puns. Almost every single line in the show is a reference to something, from Clint Eastwood to Mary Poppins, Mitsubishi to Roger Rabbit…quite an eclectic mix. Also, I hope you weren’t planning on leaning on the fourth wall because Pizza Cats just plain out doesn’t have one. Countless times in the series the characters call out the producers and writing staff on their poor judgement calls, as well as citing the script, or lack of one, any chance they can get. They will also constantly note their existance as a cartoon characters, whilst insulting their own series.

Throughout each episode the show’s narrator draws attention to any plot holes or clichés in the series, most often through the use of sarcastic comments. At one point in the series he even jokes about the fact that Speedy ends almost every fight with his cats eye slash. He notes that they have a contractual obligation to him, being the face of their (non-existent) merchandise. He even points out the term magical, noting It as the only explanation for the pink swirling graphics.

That being said, the series also features a small … episode arc that is a actually quite well thought out. Though metered by the chaotic humour, the core elements of the story would do well in any anime. Using elements subtly hinted at earlier in the series, the bad guys come up with their first useful plan ever. This story also provides the Pizza Cats with a power that they actually reatian through the rest of the series. Clearly an example of the Japanese story coming through…briefly. 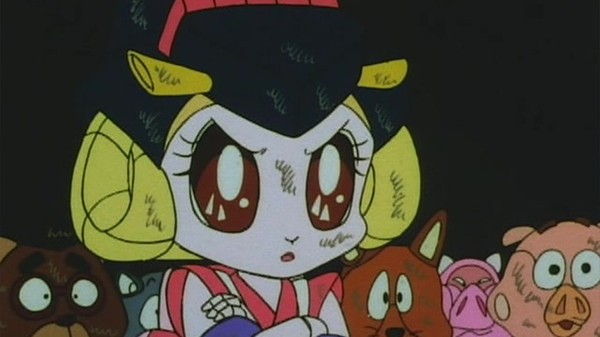 Do NOT mess with Lucille…

Visuals
Pizza Cats definitely possess a visual style of its own, which the characters clearly represent. Each cybernetic citizen in the series is presented in a super deformed chibi style, averaging at about one meter (three feet) tall. Quite a large number of species are present within Little Tokyo, providing quite a lot of variation in the cast, though the focus is on the Cats for a majority of the time. Naturally these characters overreact in typical anime fashion, so expect a lot of bulging eyes and shifting artistic backgrounds. Don’t worry, somebody in the show will call attention to it. As visual Japanese text is never translated between dubs, the series naturally takes this opportunity to make new jokes. In one particular episode the Pizza Cats become famous and apparently “ the fact that the magazines are in Japanese deters no-one”.

Animation is also categorised as “special effects”. One episode included a scene with “such awesome special effects you’ll think you’re witnessing a head on collision between Pink Floyd and Judas Priest.” Whilst not necessarily true, you gotta love those descriptive powers. Being an older anime series, a number of scenes are reused between episodes, such as Speedy drawing his Ginzu Sword. Whilst visually repetitious, the series is self aware enough to try and liven it up each time these scenes appear. 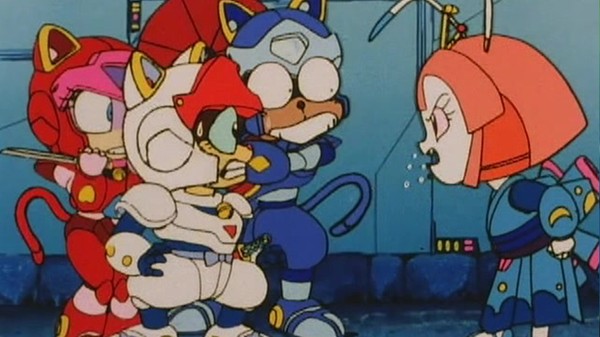 Audio
Samurai Pizza Cats definitely features unique voicing. As previously mentioned, the series draws heavily on its vocals to create its trademark sense of humour. With jokes aplenty, you’ll be hard pressed to find a serious line anywhere in the show. Amidst the jokes, the series also employs rhyming on a fairly regular basis to add to its insanity. When launching the Pizza Cats into action, Francine tends to babble on about something random, sometimes not even understanding herself. For a somewhat dated series, somewhat being twenty three years, the voice acting actually holds up pretty darn well. Whilst every character with an accent, or with an excess of emotion, it doesn’t seem ridiculous…you know, when compared to the show.

The writers of the show were also clearly fans of actor/comedian Paul Lynde, known for playing Uncle Arthur in Bewitched, or Templeton from Charlotte’s Web if that’s more your speed. The series theme songs are performed by writer Michael Airington impersonating Lynde, adding a definite campness to the show which blends well with the nonsensical style. Villain Seymour “The Big” Cheese also sounds notably like Lynde, though to a lesser extent than the theme song vocalist.

Extras
This release is pretty sparse on extras, only including trailers for a few other series. Nothing major. 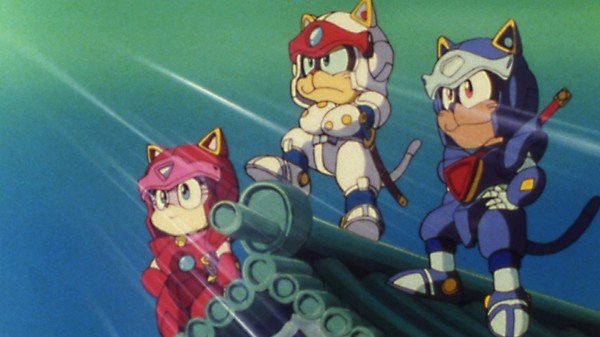 They’ll be back for another episode

Overall
Samurai Pizza Cats definitely should not be taken seriously. It’s a farcical, fast-paced, chaotic excuse for a series and it’s pretty damn awesome. From back in the day when kid’s shows included a lot more hidden mature content, pop-culture references fly as these Cats fight for truth, justice and pepperoni. It’s fun, it’s quirky and it’s certainly memorable. Action, excitement, comedy…and they all did their own stunts. Now that’s commitment.