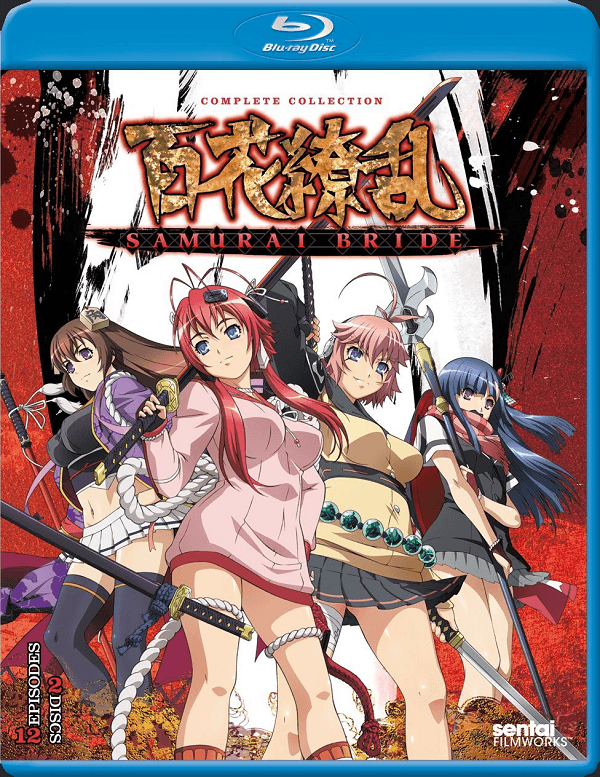 Overview
Some shows can boast about having an enthralling storyline, others can be praised for their amazing graphics, while other series can take pride in setting a new standard. Then there are shows that people watch simply to have a good time and maybe even a healthy dose of fan-service. Samurai Girls was a show that fell into that latter category as it had plenty of bare skin to show off but a decent amount of action and a likable cast of characters. As such with the sequel, Samurai Bride now available in North America, is this second season worth picking up?

Story
After the events that took place during Samurai Girls, Muneakira Yagyu, a man capable of transforming those he kisses into Master Samurai, went on a journey to train himself to become a better general. When he arrives back at his family’s dojo, what should have been a happy reunion turns into one of shock as he finds that the dojo has been transformed into a maid café. 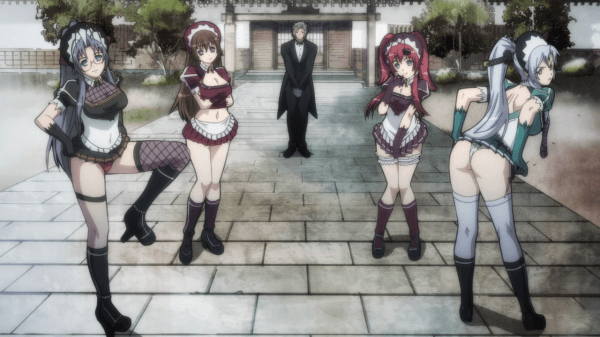 He is informed by Yukimura and Sen that due to Sen’s brother claiming victory over the previous threat to Japan and poor investments by Yukimura, the dojo is in threat of being shut down. Because of this, the girls came up with the idea of creating a maid café to help pay off their debts and as such, Muneakira agrees to help out in order to help make ends meet, especially since everyone, including Juubei and Kanetsugu, are eager to help out.

The time of partially revealing maid outfits doesn’t last for too long however as shortly after Muneakira arrives, four Dark Samurai that have been resurrected from death have come looking to battle against Juubei who is incapable of using her Master Samurai powers after her own death last season. After being spectacularly defeated by these Dark Samurai, a curse is placed on Muneakira and if the girls can’t manage to bring Juubei’s powers back and defeat these samurai, the curse will strip Muneakira of his abilities and bring ruin to the dojo and the girls’ lives. 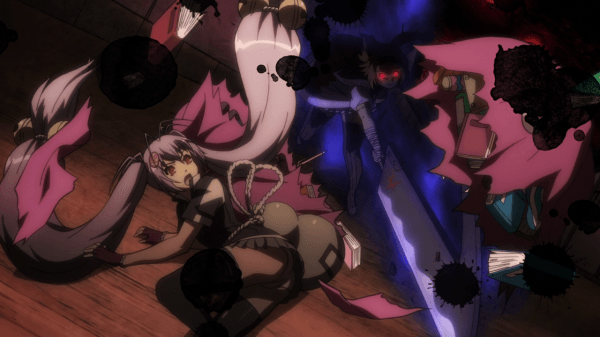 While the Dark Samurai obviously pose a threat, that doesn’t stop one of them from becoming a regular of the Maid Café who constantly antagonizes Juubei for being a fake. The first five episodes of the series focus on various elements of the Maid Café as the group tries to stay afloat, have a few skirmishes with the Dark Samurai, and even turn a new ‘character’ and an older character into Master Samurai.

After this point the series takes a bit of a different spin as the Maid Café is able to close and news reaches Yukimura’s ears that something stronger than a Master Samurai exists, something called the Samurai Bride. Once another new face arrives and begins training the girls to control their Ki in an effort to put up a fight against the Dark Samurai, the story shifts into one where a dark force is threatening the whole of Japan and the circumstances surrounding the Dark Samurai’s resurrection which may not be as simple as good vs evil as the series initially presents it as. 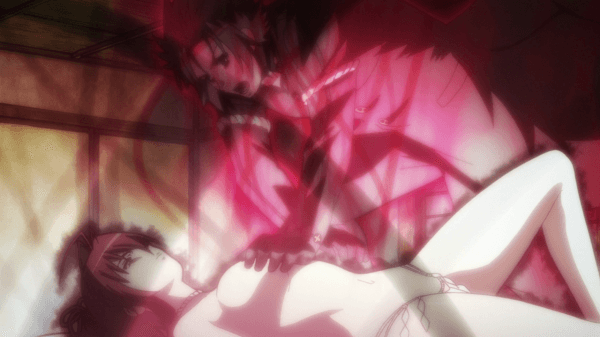 In many ways Samurai Bride feels the same as Samurai Girls, albeit with a different enemy and more time spent on maids and picking on Kanetsugu than introducing characters, but that isn’t much of bad thing as far as this show is concerned. The reason for that is because Samurai Bride is just a really fun series with plenty of comedic moments and just a general sense of silliness playing across the backdrop of an action series.

With the familiar characters being as likable as ever, a ton of fan-service, and plenty of situations changed up to keep things fresh, Samurai Bride may lose the plot at times with its silly nature, but it manages to deliver exactly what fans of the series are expecting. A nice comedic series with plenty of fan-service and a decent dose of action to keep the story flowing.

Visuals
As one would surmise, Samurai Bride has been released completely uncensored which means what was previously censored with ink splotches in the original showing, is now bared in its full chested glory. Every girl in the series at some point has her breasts exposed, whether it is in the bath, during a battle, or during one of the times the girls are messing around, there is plenty of nudity to be seen here, especially since one of the new characters literally fights naked outside of some strategically placed hair covering her nipples and convenient tail placement. Along those lines there are plenty of gratuitous panty shots as well, including a panty sniffing scene that is played seriously. 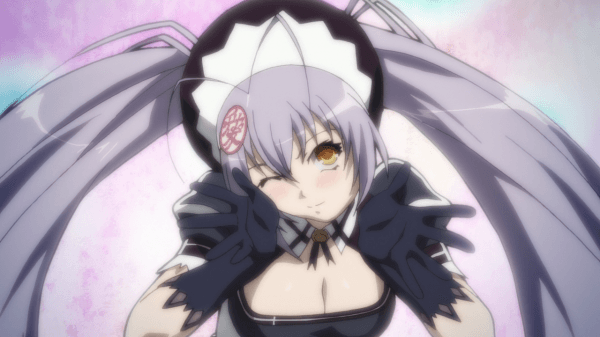 The overall look of the series remains similar to what was found in Samurai Girls with Japan being presented in a pseudo-modern form, with old style buildings everywhere despite there being computers and tablets that are used regularly and everything having a very stylized look to it. Character designs remain very much the same as well, with new characters fitting the theme well and even filling the kemonomimi quota. Of course these girls all have plenty of revealing outfits that change regularly to show off their assets, though it is funny that the whole maid aspect used in the beginning is usually more concealing than the clothing they usually wear.

Audio
The English voice actors from the first season return to reprise their roles in Samurai Bride which is great for fans who enjoyed the original English dub as I can say that the new characters introduced this season are presented splendidly, making Samurai Bride a series that viewers should enjoy just as much in English as they would in Japanese. There are a few awkward sounding moments however such as when the girls say “Moe Moe Heartbeat” which probably should have been said the same as the Japanese version. 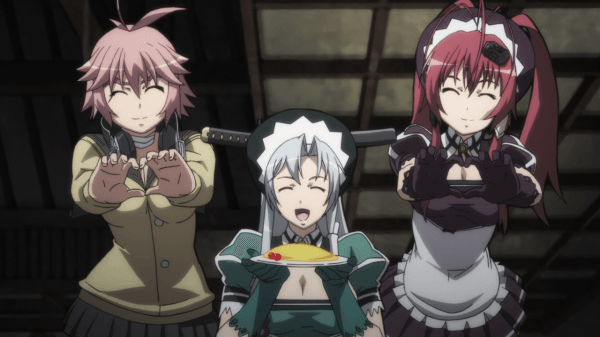 As far as the soundtrack is concerned, Samurai Bride features some fitting background music for the genre but it can be a bit too simple sounding during calmer moments. The opening theme for the series is fittingly called “AI DO.” by Miyuki Hashimoto which works as a great opener for the series that rivals that of the first season while the ending theme is done in a comedic nature focusing on the maid aspect called “Kekka, Guuzen de Gozasourou,” and is sung by the Japanese voice actresses for Juubei, Yukimura, and Sen.

Extras
The special features for Samurai Bride are saved thanks to the fact that there are some nice shorts accompanying the release, as the other special features simply are various Japanese promotional material for the series, trailers for other Sentai Filmworks anime, and a three different clean versions of the opening theme and seven different clean versions of the ending theme. 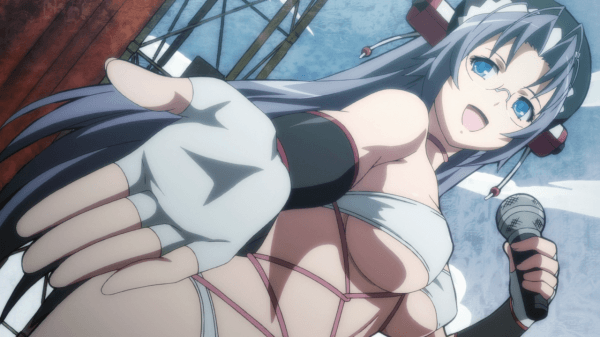 There are six of the aforementioned ‘Samurai Bride Shorts’ that are numbered as if they were to take place between episodes, though the numbering of the last short really doesn’t fit. Each of these shorts are only about three minutes in length but in these three minutes viewers are presented a few members of the female cast in all different kinds of light-hearted fan-service heavy situations. So if you didn’t manage to get enough off of the man series, these extras should do the job.

Overall
Samurai Bride does little to change up the formula we were shown in Samurai Girls but for a series like this one, it works well enough. This fun little show has everything that fans of the first series will be looking for; Boobs, butts, action, and a new story to watch everyone’s favorite characters deal with. This is helped along by the new characters introduced along the way and just enough time spent on the fluffier aspects of the series before shifting focus to the actual story and bringing this new story to a fairly successful close.