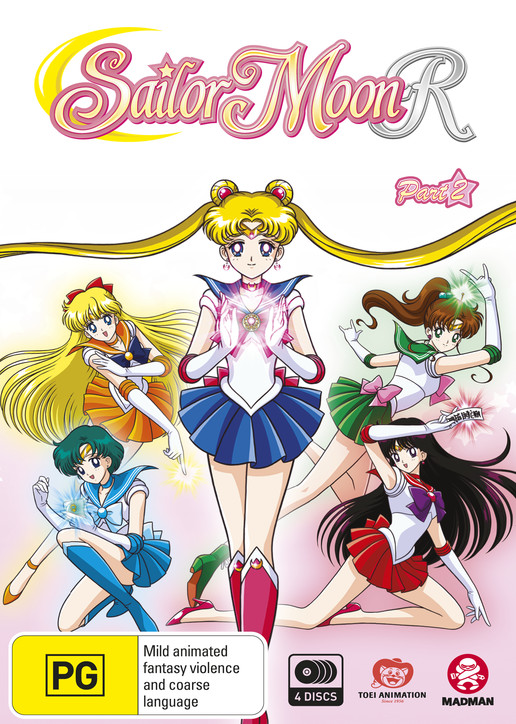 Whether Usagi likes it or not, Chibi-Usa is here to stay with the Tsukino family. Chibi-Usa continues to play the role of pseudo-antagonist; she is trying to obtain the Legendary Silver Crystal for unknown reasons and is trying to steal Mamoru away from Usagi. The Black Moon Clan has a significant interest in Chibi-Usa and is trying to alter the future by changing the twentieth century. Meanwhile, Mamoru is having strangely realistic dreams that lead him to break up with Usagi.

Although Usagi’s brother, mother and father have been hypnotised into believing that Chibi-Usa is a cousin of the Tsukino family, Usagi remains unconvinced of this supposed fact. The other Sailor Guardians all act friendly towards Chibi-Usa, and Mamoru is perhaps the most kind and friendly towards her. It is never explained why Chibi-Usa insists that Mamoru is her boyfriend and that he should not be with Usagi. This, and her continual manipulation of every single person who is nice to her, causes her to initially come across as annoying. In the end, whether each individual viewer dislikes Chibi-Usa or not is a matter of individual opinion. Her motivations are eventually revealed, which does help make her actions somewhat understandable. The side-story episode devoted to her, “The Beach, the Island and a Vacation: The Guardian’s Break”, presents her as a more relatable character. She grows by the end of that episode, although she is still rather unfair to the Sailor Guardians at the beginning of the episode. 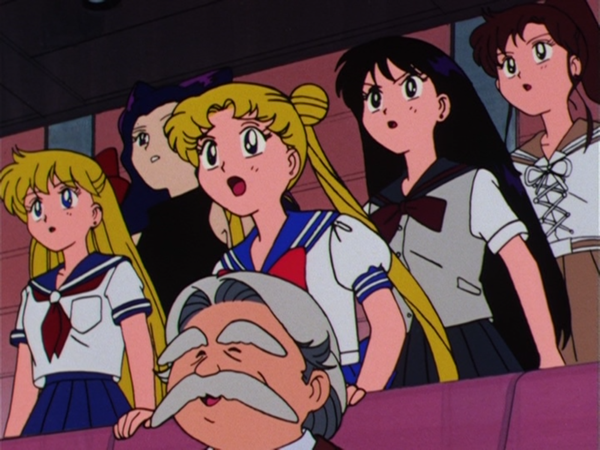 The history of the Black Moon Clan explores the intriguing idea of completely separating the dark side of humanity from the peaceful side. A group of people from Earth are banished in the future due to their behaviour, leading to the creation of The Black Moon Clan. Its members have faults similar to those of the Dark Kingdom’s members. The Four Spectre Sisters get into meaningless fights and ultimately manage to fail at every single task they are given. The Sailor Guardians are never truly going to lose to anyone, of course, although some of the Spectre Sisters come very close to succeeding towards the end of their careers as villains. The major difference between the outcome of the Four Spectre Sisters and the outcome of the Four Heavenly Kings of the Dark Kingdom is that the Spectre Sisters all get a second chance. Their pointless arguments about makeup, hair and who Master Rubeus is attracted to cease, leaving them to enjoy being human and, more importantly, to enjoy being free. Rubeus does not get a second chance, however. Much like how the Spectre Sisters are his pawns, he himself is a pawn to be discarded once he stops being useful to the ultimate cause. The ultimate goal of the Black Moon Clan is for its members to return to their rightful home of Earth and replace the future Neo-Tokyo with their own Tokyo, one filled with dark energy. This is the goal of Rubeus and the initial goal of the king, but the mysterious Wiseman has his own ambitions. Wiseman has been the one running the show; he is not an underling of the king, but rather the one controlling the strings of his puppets. The theme of betrayal is very much present towards the end of the arc as the members of the Black Moon Clan turn on each other instead of acknowledging who their true threat is. Their downfall is caused in part by their failure to stand together, which is exactly what the Sailor Guardians do in order to defeat their current enemy. 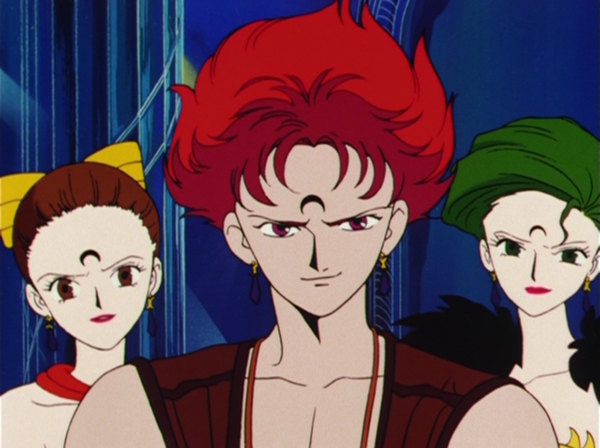 One of the greatest additions to this series is the introduction of Sailor Pluto, the guardian of time. She plays a very important role in the series yet is given little screen time. Her history is not explored in this season, nor is her loneliness explored as much as it could have been, but it will be interesting to see how she is portrayed in future episodes. The writing in this season is absolutely excellent, making every episode worth watching. Some episodes may not progress the plot at all, but they are always profound, and the plot-driven episodes are fantastic. Looking past the negative opinions that some people have about Chibi-Usa, the only real disappointment about this season is that the final episode is not spent having the guardians do something fun and light-hearted after the conclusion of their latest battle.

The animation is as fantastic as ever, and the remastering process that Madman is using continues to help their releases of Sailor Moon be about as high quality as DVD releases can be. There are a few visual artifacts here and there, but this is to be expected considering the age of the materials. Overall, the visual presentation is almost perfect. 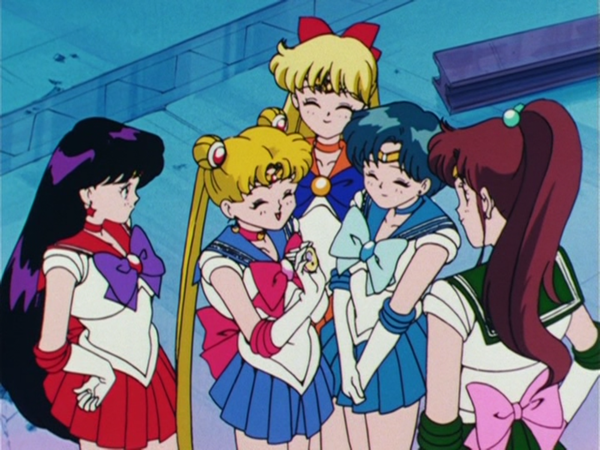 The only somewhat positive element of the English dub is Sandy Fox, the voice actor for Chibi-Usa. That being said, she is by no means enough to save the English dub. Stephanie Sheh’s voice is not appropriate for Usagi’s character and nor is the voice of Robbie Daymond suited to Mamoru Chiba. The English voices of Rubeus and the Spectre Sisters are not quite as unsuitable, but the casting choices could undoubtedly have been better in almost every case. This is not to say that the voice actors are bad at their jobs; their voices simply do not suit the characters of this series. The voice acting for the original Japanese version, however, cannot be faulted. The background music and opening and ending songs continue to be of the excellent quality expected of the music composed for this series. Emotions often run high in this series, so it helps that the music always adds to the atmosphere. 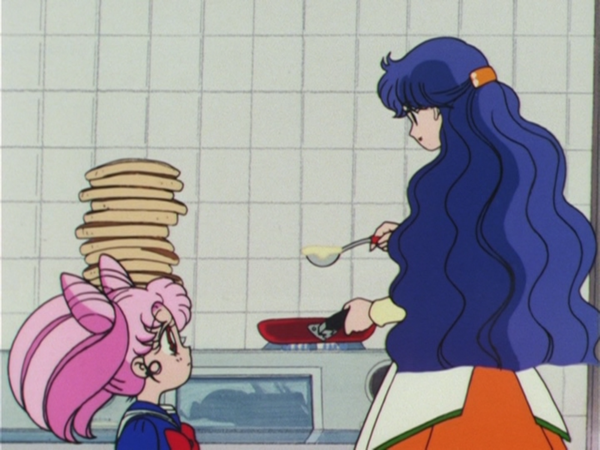 The on-disc extras consist of the textless opening and ending animation. The quality of these two extras is not as high as usual. The visual quality of the latest animation sequence for “Moonlight Densetsu” is slightly below DVD standards, and although the background text is perfectly readable in the textless animation sequence for “Otome no Policy”, there is a significant amount of colour bleeding on the left half of the screen.

The Black Moon Arc is continually engaging, even when Chibi-Usa is hogging the screen time to be annoying. It is eventually revealed why she is so cruel to Usagi, for the most part at least, and the explanation of why she is here does make sense and explain why she is so hellbent on getting the Legendary Silver Crystal. The flashbacks to her past do unfortunately portray her as a mischievous child, but it is eventually possible to forge an emotional attachment to her. Whether she will add anything positive to the next season remains to be seen, but the whole episode devoted to teasing Sailor Moon S gives the impression that it will be another excellent season. It is, however, very unfortunate that one or more people decided to waste a whole episode by repeatedly showing the same few clips instead of getting Takeuchi to write an original short story or adapting part of the Sailor V manga. Aside from that, this release is a worthy addition to any fan’s collection. 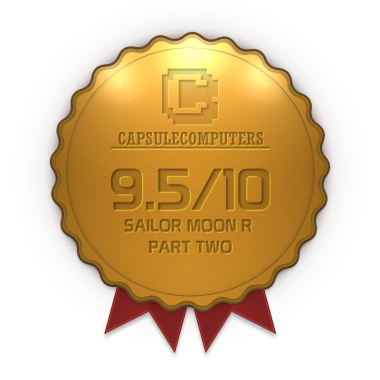