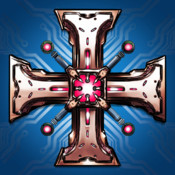 Sage Fusion is a point-and-click style RPG adventure for the iOS, featuring a story that’s told with the visual flair of a visual novel. It’s developer, Kidalang, is based in Indonesia and hope to release games with equal emphasis on gameplay and story-telling. Sage Fusion is their first title. Have Kidalang fused together all the right elements in realising their creed? Read on to find out.

The game starts off with two spies, named Vientiane and Florence, attempting to infiltrate the very heart of the Neo Vatican; the headquarters of the Zeian Church. The infiltration mission does not go unmet however; guards descend upon the two, who survive the confrontation. Before things can move any further, the story switches over to our main protagonists, bodyguard Alvonse Brin and his boss, a wealthy trader named Marlon Ziglar. 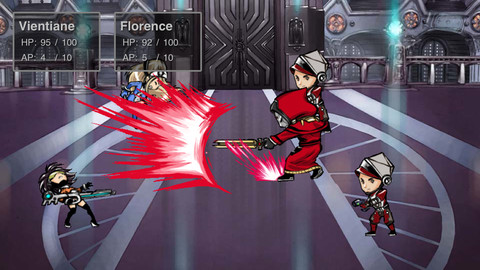 Marlon was set to meet a very important client in Capistad, the capital of the Galactic Union, and so Alvonse wondered why his services would be needed; was this not just a civil business meeting? As you play it all out, you learn much about Alvonse’s past, get to explore Capistad, help out it’s citizens and ponder some philosophical and deep questions about human civilisation. Their story together may begin in search of a part for Marlon’s broken down coffee machine, but the two come to a much better understanding of each other.

And after the meeting finally takes place, the events that occur from that point on will entice you to continue on with “Chapter 2” once it is released. It must be said, though, that there is quite a lot of text to read through, and it slows down the game’s pace quite drastically at times. In the Inventory/Pause menu (one in the same) at the top right, the text speed can be changed, which helps. Also, there are numerous and repeated spelling and grammatical errors such as the line “there are so many stuffs here…”.

The gameplay is very simple and revolves around simply tapping points of interest, objects or people to move there or interact with them.  Items that are picked up can be viewed in the Inventory menu, although they are simply listed in text-form with no imagery implemented, which is disappointing but not a major aspect of the gameplay, so it’s rarely used to begin with. 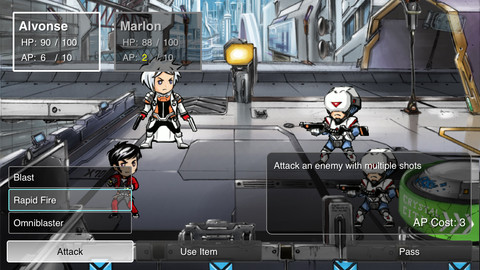 Combat also involves tapping the attack you want to use, which displays a quick description and its AP Cost, tapping it again to confirm and then tapping on the enemy you want to hit. Once the attack animation starts, a shield icon will fade in over that enemy’s head. Tapping it will break the enemy’s defence, allowing for a stronger attack. The longer you wait before successfully tapping it, the more powerful the blow.

The same technique is used while defending. Turns can be skipped in favor of saving up your attack power, which raises as you successfully defend against your enemies’ attacks. Items can also be used in the same way; by simply clicking the Use Item menu on screen, choosing which item to use and then confirming the pick and it’s target. These can range from Revitalizers, which heal your HP bar, to Grenades, which can be used against multiple opponents. Using an item does also require expending AP.

With over 70 hand-drawn backgrounds, Sage Fusion has a great visual appeal reminiscent of a motion comic. The Galactic Union is well developed visually, as are the characters. The visual design is unique, although inspiration from certain Japanese RPGs could be argued. 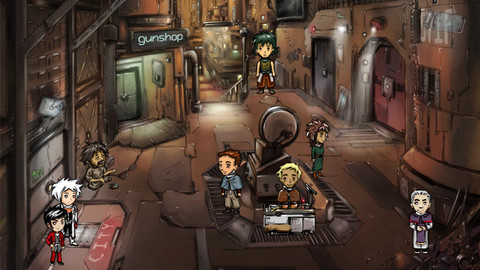 The world is colourful with each distinct area having a representative colour scheme, such as the poorer Inner Globe being bathed in browns. I do wish that the objects you collect had their own visual representation within your inventory, which is very basic and completely text-based. That being said, the visuals are probably the best aspect of Sage Fusion.

The music of Sage Fusion thematically fits very well. Most notably, whenever the Zeian Church is encountered, or the Neo Vatican is visited, this great organ-heavy track plays that evokes the air of reverence, but also a slight sense of power and intimidation with it’s low keys and tone before it picks up. The speed of the music picks up appropriately during battle sequences, of course. 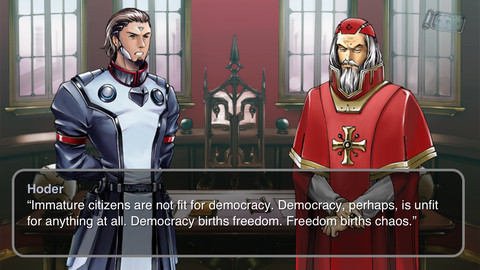 In terms of sound effects, I was a little underwhelmed. Barring a few key ones, the soundscape starts to sound a bit bare because of the lack of effects. Dialogue is all text, which is expected, but it would have been nice to hear a little signature greeting whenever you engage in conversation with each character. Just one or two words, nothing extensive. The game really would have benefitted from some further audio support in that aspect.

Sage Fusion has a meaningful story with some political and moral overtones that relate to the real world and our lives. Even religion is tackled. But its futuristic, fantastical sci-fi setting is a decidedly different world than our own. There may be some slow moments, too much superfluous text to troll through, consistent English/grammatical errors and a lack of augmentation through audio, but Sage Fusion has a great visual style, a nice battle system and is quite long considering it’s just “Chapter 1”. All in all, I recommend exploring the Galactic Union.