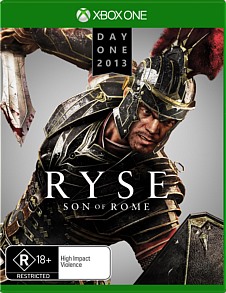 Ryse: Son of Rome has been 7 years in the making, much like the Xbox One console itself. However, it didn’t always exist in this form. Originally, developer Crytek was planning and working on a first-person, Kinect-only melee game. It was announced at Microsoft’s E3 2010 press conference under the temporary title of Codename: Kingdoms. Pre-rendered footage was shown at the following year’s event, but a further year later, VP of Microsoft Studios, Phil Spencer, hinted that its sole focus on Kinect had shifted to a more augmentative approach. Now, in 2013, Ryse has arrived at the Xbox One’s launch as a fully realised action-adventure title, “better with Kinect”. Initial negative reactions after its E3 2013 demonstration led to lowered expectations, but just how good (or bad) is this Roman epic?

Rome is falling. The barbarians of Briton have amassed an enormous army of fringe tribes and is advancing on the majestic city. Emperor Nero is more concerned with his own survival than the future of his people. Centurion Marius Titus is fighting valiantly, and reaches Nero to escort him to a safe location and protect him. They enter the emperor’s secret chambers behind his throne before Marius tells his story. A story of betrayal, revenge and divine intervention that is then explored. It all started almost a decade before, when Marius first became a soldier, serving the Roman Empire. It was a proud day for his father, Senator Leonitus, but an unexpectedly tragic one for Marius. [SPOILER ALERT]: Skip tothe next paragraph to avoid certain plot details. 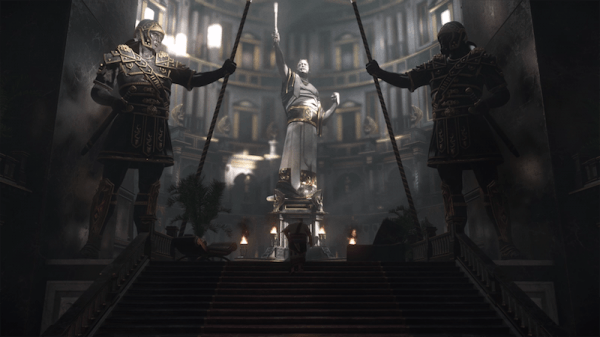 That day marked the beginning of the war. They were set upon by a Barbarian ambush that led to the murder of Marius’ sister and mother, and later, the killing of Leonitus, who entered the battle with blind rage in his heart. From that moment forward, Marius would seek vengeance alongside General Vitallion of the 14th. His journey from mere Legionary to Centurion is chronicled as he aids in defending Rome’s walls, ventures out into Britannia and beyond, confronts the Barbarian King Oswald and his warrior princess Boudica, encounters Nero’s arrogant sons Commodus and Basillius and enters the Colosseum before finally discovering the truth about his family’s deaths and exacting his revenge on the true culprit/s. A good revenge tale always appeals to me, and when steeped in deep mythology – whether Roman, Greek, Egyptian or Norse – it’s even better.

One common thread found throughout the stories of the aforementioned civilisations is the mystical or divine… some, perhaps less religious types, would say supernatural. Ryse: Son of Rome also features this with the Immortal spirit appearing at various points to guide Marius, and her opposite Aquilo seeking to influence chaos and havoc. There is also emphasis on the legend of Damocles – the Spirit of Vengeance whom the Goddess of Revenge resurrected as a ghostly black centurion so that he could pay back those who deceived him. He plays an important role in the game’s narrative (you can read his origins in the Ryse: Sword of Damocles digital comic). The motion capture and voice-work by the cast is phenomenal and Ryse‘s brutal campaign may not last longer than 6-7 hours, but that is a good thing as the story told is concise, containing little filler; a very well-executed, satisfying tale. All cutscenes can be viewed in the collectibles section of the Smartglass companion.

Its so commonplace now to adapt the hand-to-hand combat system that Batman: Arkham Asylum introduced that mentioning the very fact has become redundant. It is now the standard for all appropriate action-adventure games. In Ryse, ‘X’ is your Gladius attack, ‘Y’ is your shield bash, ‘A’ is your counter and ‘B’ is your roll evade. These are the basics, although you may also mix it up with a quick Pilum throw with both triggers that does considerable damage, will destroy shields and can stop an advancing enemy in his tracks, from a distance, also aiding in closing angles and allowing you to focus on opposing forces from a more singular direction. Different enemy types are introduced over the course of the campaign that require varying strategies of attack. 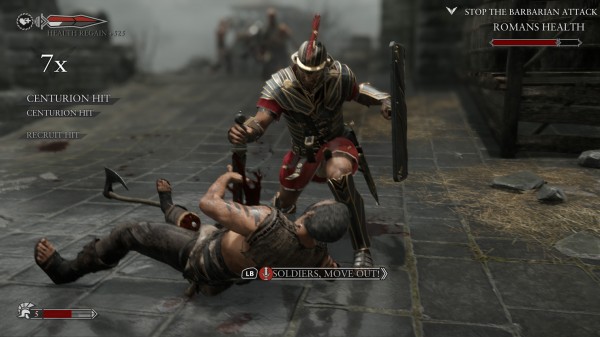 When playing on ‘Centurion’ difficulty, combat is challenging to a point, but still comfortable. But turn it up to ‘Legendary’ – which unlocks upon completion – and all the colour prompts (except for in Executions) disappear, requiring you read movements and animations more intuitively. Enemies with heavy attacks are particularly difficult here. They have a longer wind-up, sure, but in the midst of battle, it is deceiving and that split-second of calculating what kind of attack is forthcoming can lead to late reactions, especially without the helpful red glow telling you to dodge. Enemies also take more hits to enter the execution state and do more damage. The A.I. is also unforgiving in that they do not wait for you to be done before advancing. You could have 3 guys striking you in quick succession, so your reflexes will definitely be tested.

Crytek added a layer of depth to the combat with the the Health, Focus, XP and Damage boosts that can be chosen with the D-Pad and are received when successfully completing an execution. Yes, they are quick-time events, but they each have a different timing and combination that must be similarly memorised, like attacking patterns, in order to execute in a quick manner and gain the most out of them. It would have been nice to see more risk involved in the system, like perhaps taking an unblockable hit-back when pressing the wrong button in the chain. Building your focus meter allows you to activate ‘focus mode’ for a short period of time, slowing down time and allowing you to quickly and efficiently waste your opposition. 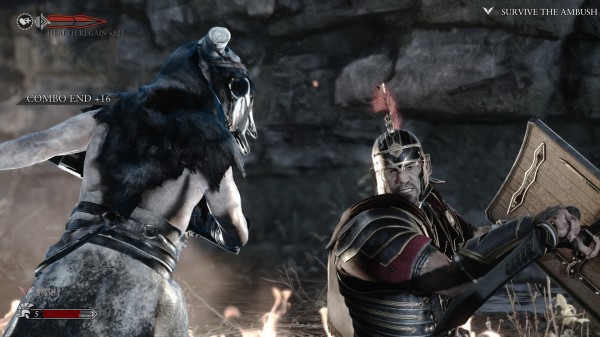 The previously mentioned Pilums are spears that can be picked up and thrown as a long-range weapon, with the further you aim to throw, the longer the aiming process. Enemies, however, are equipped with arrows, which can be deflected or evaded. Perfectly deflect them and they will return to sender… killing a barbarian by hitting his own flaming arrow back at him is especially gratifying. Set-pieces are spaced out all through the campaign where you must decide between offensive or defensive tactics for your supporting Legion, commanding them to posts where they may either cover you or defend a side while you take the other. On these occasions, optional voice commands such as “Archers, cover me!” are available and quite responsive.

Also, in most of these instances, a Scorpio is present, which is a stationary ballista, or crossbow. These sections, where you can blow up strategically placed explosives and tip over vats of liquid fire, combined with the tactical moments break up the gameplay a little bit and are welcome additions for it. The Testudo Formation (where the Legion advances in two rows, shielding each other) can also be entered in set locations. Here, you choose when to turtle up against the onslaught of arrows and break out, throwing your own artillery at the adversaries. The Xbox One controller’s Impulse Triggers come into play when holding ‘RT’ to build up your retaliation. Outside of this, there are boss-like battles with a few key characters that are largely enhanced versions of already confronted enemy archetypes. 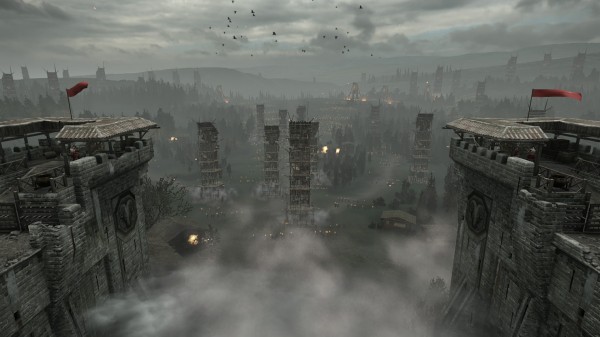 As you gain XP and rank up in single-player, your purse will get heavier. You can then upgrade Marius’ abilities and buy new executions with them. Progressing through the 8 chapters, three kinds of collectibles can be acquired: Scrolls, Chronicles and Vistas. They correspond respectively to accessible biographies, comic book pages and concept art on the Smartglass companion. The app also holds a live timeline that tells you when a collectible is near and offers videos on how to find them. Finally, we have the ‘Gladiator Mode’, or multiplayer suite… even though you can play 4 maps ‘Solo’. Besides that fact, ‘Round-to-Round’ and ‘Multiplayer Arena’ categories are online co-op only, with 12 dynamically self-altering maps at your disposal, the tiles of which transform between rounds, changing the landscape, traps and layout.

There are unique multiplayer and co-op executions to be experienced, as well as special abilities depending on which God you pick to represent at the outset. Mars, for example, grants an automatic damage boost after executions and the power to expel a fiery blast to surrounding rivals (takes the place of focus mode). Each match is made up of multiple rounds with varying objectives, running the gamut from defeating all archers, killing evasive messengers, destroying pesky catapults and holding and defending a location. Gold is earned after each, which can then be spent on buying booster packs possessing new armor pieces, weapons and elixirs, the latter of which can be assigned to the left and right buttons on the D-Pad and drank mid-match. Up your rank and improved packs become purchasable. Complete enough rounds with a designated God and you will unlock their “Gift of the Gods” – either a powerful shield or sword. When teaming up, ‘Gladiator Mode’ can be fun, but also rather easy. It reminds of God of War: Ascension‘s multiplayer, and not just due to the mirroring themes.

So this goes without saying, but Ryse: Son of Rome looks absolutely, mind-blowingly spectacular. Crytek have had the reputation for setting graphical benchmarks since Crysis released for the PC back in 2007, but they’ve really transitioned to this now current-generation of hardware better than anyone else in terms of being able to utilise it and show just what can be done with it. The textures of the different materials, from metal to bone and organic elements are extremely realistic, and in conjunction with the best lighting engine ever witnessed in a video game, you get the most life-like representation of physical objects and space in history. I found myself constantly in awe at this game. 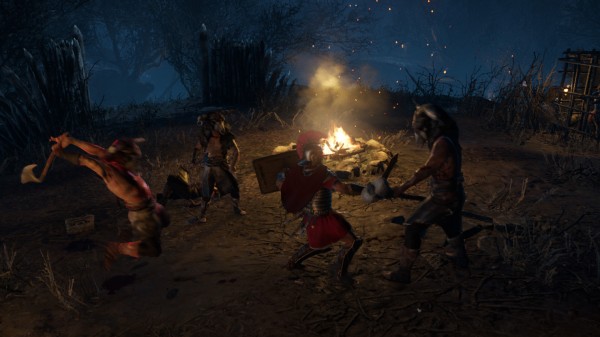 The scary part is, there’s still room for improvement in the graphical department, with fire oddly looking more like a video clip than a rendered effect and characters’ expressions and eyes being a little more “dead” outside of the marvellous cutscenes. The soundtrack does a fantastic job of transporting you to Ancient Rome, with the inclusion of authentic instruments from the time such as the lyre, tympanum and Roman tuba. Although inspired by traditional Roman music, the music has a memorable, signature sound and main motif that will always be associated with the title. If you own a tablet, you can stream the entire soundtrack via the collectibles tab at your leisure.

I feel like Ryse: Son of Rome has certainly received an undeservedly bad rap. And this could be due to a number of factors, the most obvious of them being a predetermined opinion based off of unfair and short-sighted negativity since its reveal. Crytek tells a revenge tale here that is breathtakingly rendered, expertly acted and performed, well told and tight, sure not to overstay its welcome. If it had – and compounded by complaints of it being too easy/simple – than I could see how criticisms of boredom-inducing repetition would be justified. But play it on ‘Centurion’ difficulty, or better yet, ‘Legendary’, and mastering Ryse‘s combat system become a respectable challenge. Add in the competitive co-op in ‘Gladiator Mode’, plus the collectibles viewable in the Smartglass companion – along with its other excellent supplementary content/features – and Ryse: Son of Rome evolves into an overall deeper, more satisfying experience.