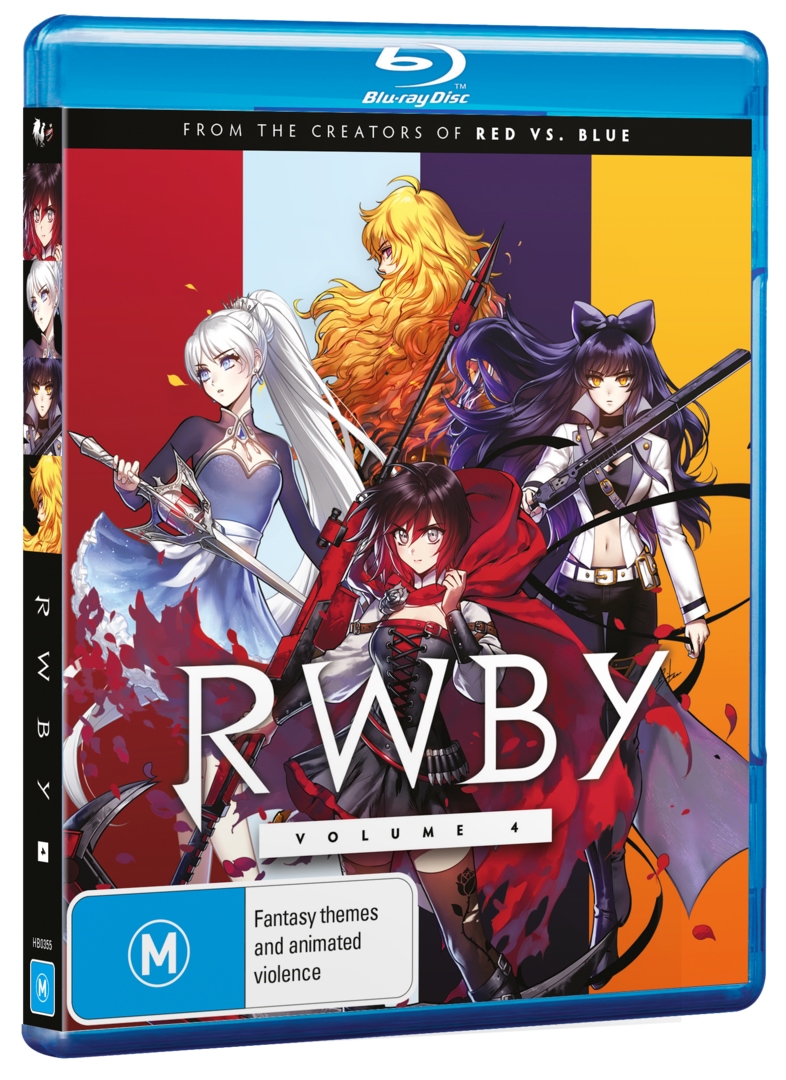 Beacon Academy, once a safe place for human and Faunus students from around the world, has fallen. Ozpin was killed during the attack by the White Fang, or rather, its emerging extremist faction. After briefly returning home, Ruby left her older sister and father in order to trek to Mistral. She is joined by Ren, Nora and Jaune, whom are unable decide whether ‘JNRR’ or ‘RNJR’ is a better team name for them, and the group runs into Qrow along the way. Elsewhere, Weiss becomes increasingly frustrated at the way in which her father is running the Schnee Dust Company, Blake returns to her home on the island of Menagerie and Yang is given a new, mechanical arm to replace the arm lost during the fall of Beacon. 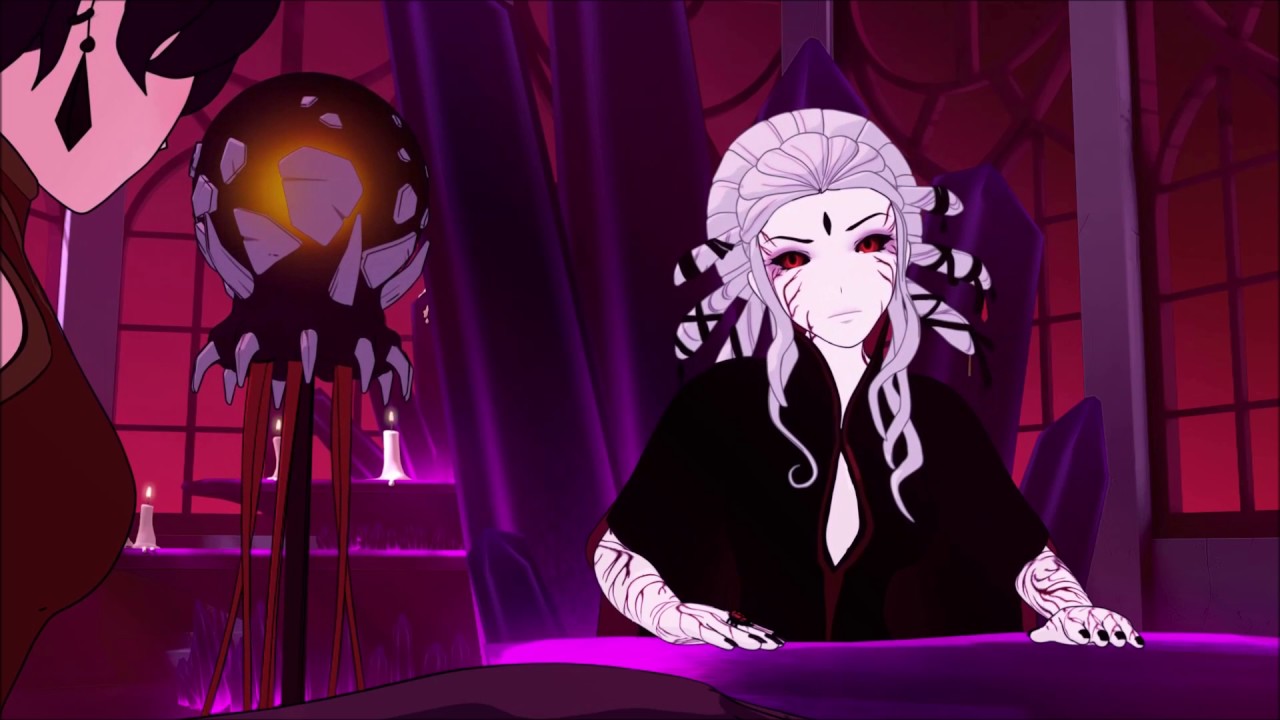 A fearsome villain named Salem orders her underlings to do her bidding. Under her command is Cinder, who is almost mute after having received the full amount of the Fall Maiden’s power. Although only one of her underlings shows their face in the outside world this time, they all remain a major threat, as does the White Fang’s extremist faction. Both of these groups of villains are largely operating in the shadows now, allowing Ruby and her friends from Beacon Academy to have somewhat of a reprieve from fighting people. On their journey, they encounter many villages that have been abandoned or destroyed, but a Grimm is never far away. After helping one surviving village out and receiving some support in return, they are on their own. The situation appears more and more bleak as they get closer to Mistral, but their teamwork and the sudden appearance of Qrow gets them through the difficult stages of their journey. Unfortunately, the Grimm and one of Salem’s henchmen, who has been sent to capture Ruby as revenge for taking Cinder’s left eye, are not their only problems.

Jaune has many questions to ask Qrow when he has the chance, and he is unable to truly let go of Pyrrha as he trains to become stronger and more useful to his friends. Ren and Nora have their own problems as well, which are revealed when they come face to face with their collective past. The two have always been an interesting couple, but the exact nature of their relationship has been something of a mystery until now. They are childhood friends, although they did not meet under the happiest of circumstances. Nora evidently did not have a happy childhood, directly contrasting with Ren’s experiences with his loving parents. Their devotion towards each other is explained through a depiction of a horrible event that occurred in their village a long time ago, making it possible to see them and their relationship in a whole new light. There are numerous people and monsters to be fearful of in Remnant, but people like Ren and Nora are still able to overcome their fears and protect what is important to them, and seeing them remain strong is a wonderful thing to see. 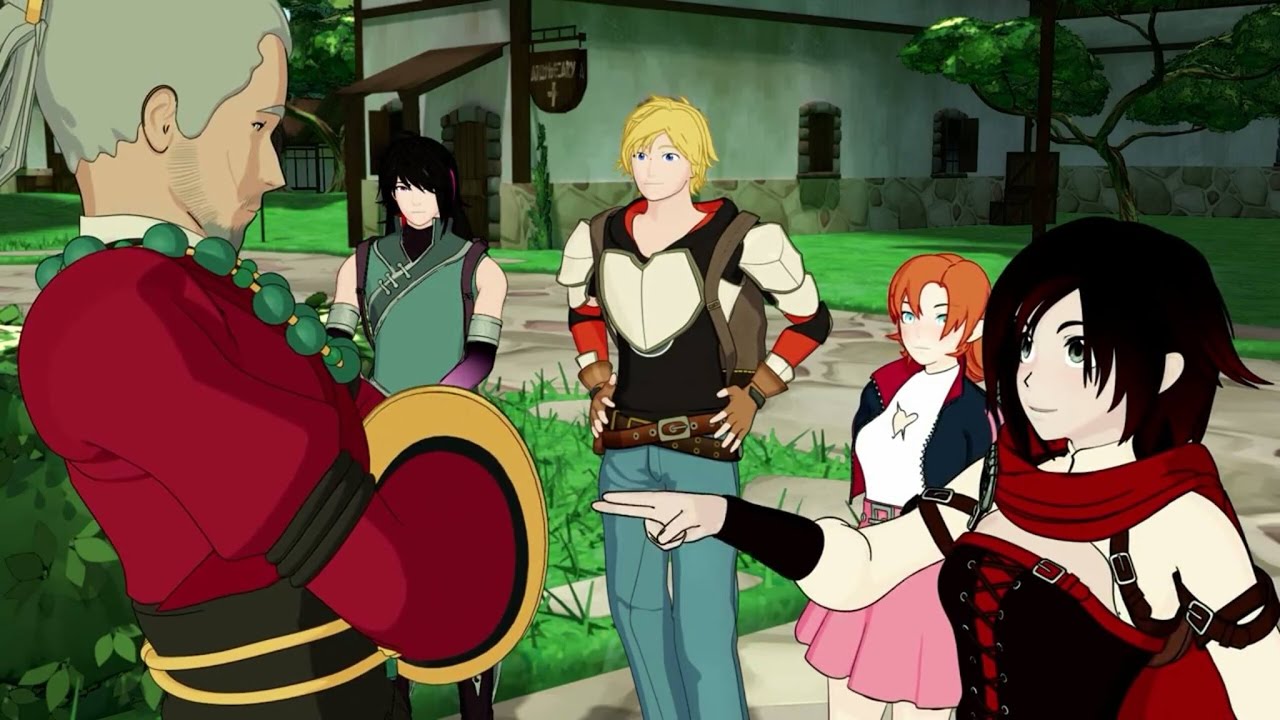 Team RWBY has been split up across Remnant, but all four of its members are doing their best to keep going. Weiss has returned to the Schnee family’s mansion, but does not approve of her father’s conduct. She may have initially come across as a stuck-up rich kid, but she has developed into a thoughtful person who is able to see what is wrong with the world around her. It will be interesting to see where that knowledge takes her in the future. She is unable to accomplish much at this point, however she does have the courage to do whatever it takes to escape her father’s controlling and dictatorial will. Blake’s parents, ex-members of the White Fang, are loving and caring unlike Weiss’ father, and even put up with Sun to a certain extent after he follows Blake and imposes himself on her and then her parents. She cannot stand the thought of people being hurt because of her, and chooses to internalise that emotional pain. Her home village is otherwise a mostly happy place; Menagerie is a small island inhabited by the Faunus. Some see it as a reminder of the segregation of humans and Faunus, while others simply see it as a peaceful island. It is unclear exactly where in the world her journey will take her next, but her contemplative character development provides a strong contrast with Weiss’ external struggles and Ruby’s seemingly perpetual fights against the Grimm and her fights against bad people. Like Blake, Yang has a supportive family. Her father does whatever he can to help Yang train so she can be stronger when it is her time to fight, and her ability to bounce back is remarkable. It is evidently going to be a while before Team RWBY is reunited, but their individual journeys are some of the most compelling parts of this volume and the series as a whole. 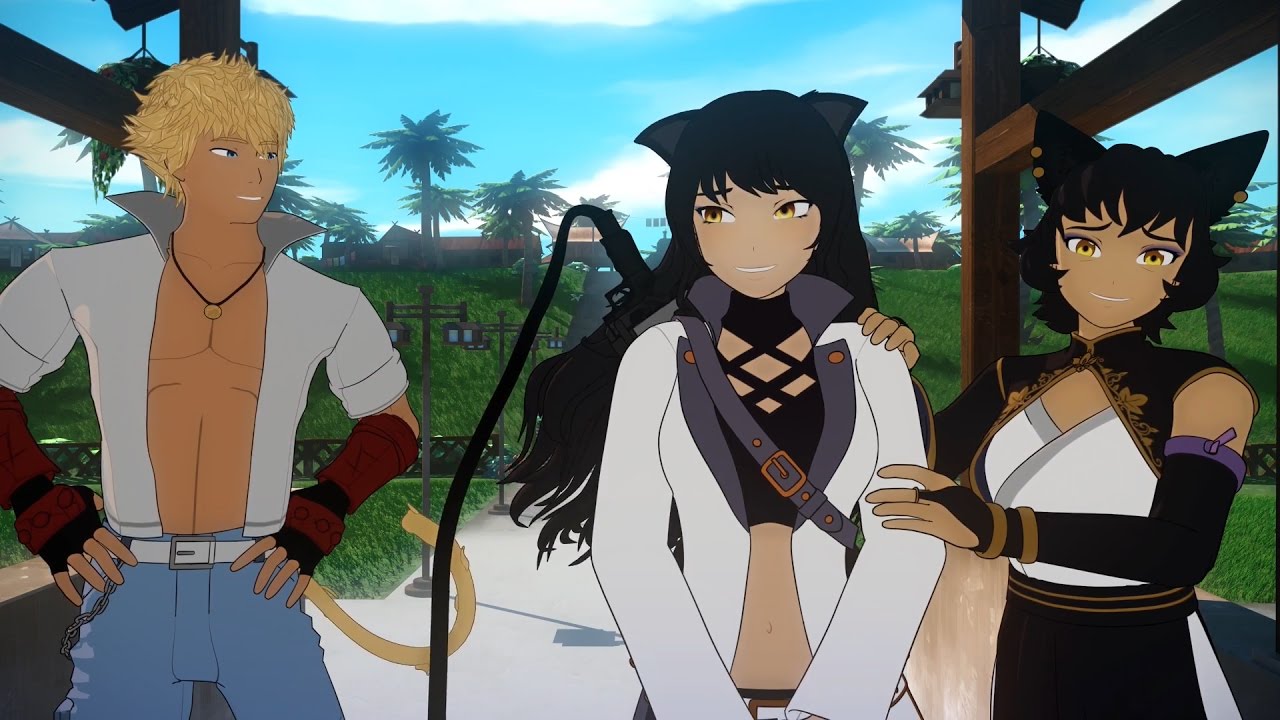 While Japanese animation studios largely and consistently fail to produce smooth 3D animation, with the notable exception of Square Enix, Rooster Teeth continues to prove itself as a leader in 3D animation. An extraordinary amount of detail can be seen in every shot, from the diverse settings to the unique characters. RWBY looks even better throughout this volume too; this is western anime at its finest. The fight sequences are consistently well-choreographed, and there are plenty of them to enjoy. Furthermore, the characters are expressive with their body language and their facial expressions. The world of Remnant is well-crafted; from desolate mountains to ruined villages to an island utopia, a significant amount of detail can be seen in every shot. 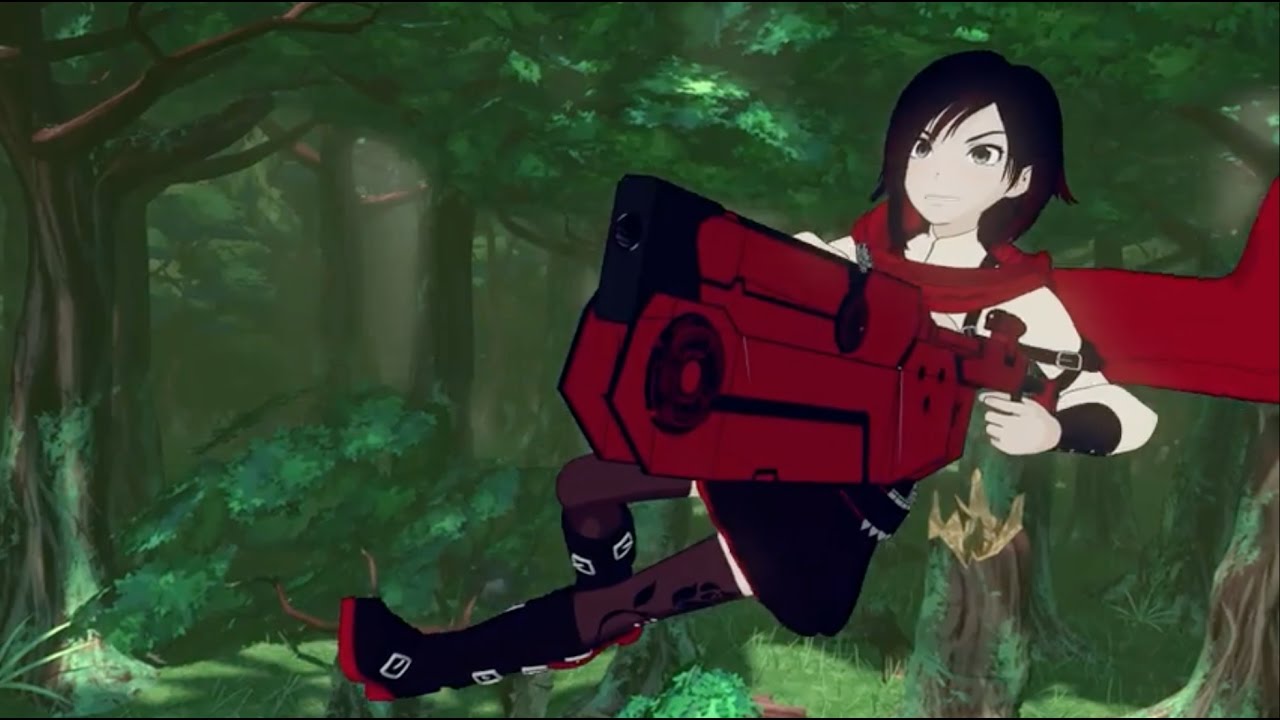 Western animated series are not typically known for featuring orchestral pieces, but RWBY is once again an exception. Emotions run high in volume four, and the music underscores those emotions perfectly without missing a single beat. It is as brilliant as it is real; Jeff Williams’ score feels like a natural extension of the story rather than literal background music that is immediately forgettable. The voice acting continues to bring the characters to life, so this is a series that is at least as good to hear as it is to watch.

Rooster Teeth knows how to entice fans to pick up a copy of one their DVDs and Blu-rays; hours of extras are included. If you want to learn more of the history of Remnant and its peoples, the “World of Remnant” shorts will satisfy that interest. If behind-the-scenes features are what you are looking for, this release also has you covered. To top it all off, a lenticular card is included inside the case. It features a clean version of the cover art for volume four on one side and a picture of Ruby’s scythe on the other.

If the first three volumes are to be considered as Act I of RWBY, this is just the introduction to Act II. An introduction that runs for roughly three hours and eight minutes sounds like it would be slow and dull on paper, but in this case, it is effective at building anticipation for the next chapter of the story. Despite originally airing as significantly shorter episodes, volume four is worth watching as a movie. It presents multiple concurrent plot-lines that feature brilliant writing, setting up what is sure to be an exciting continuation of the story of Ruby Rose and her friends as they try to save Remnant one person at a time. The voice acting, music and animation are about as perfect as it gets with western productions. 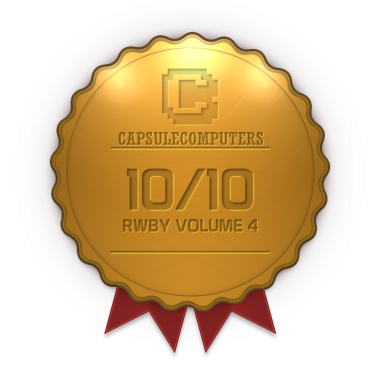 This is more of a beginning of the next chapter after the fall of Beacon than a conclusion, but the strong character development helps make it consistently engaging.
10