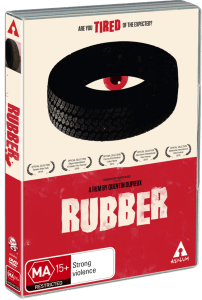 If you’re a person that is absolutely logical, needs an explanation for everything, and loves pointing out every little inaccuracy or absurd detail in a film, I’m warning you: put down the film, walk away, and watch some sort of documentary. The entire basis for this film is that there is “no reason” to anything, and that is – if anything – an understatement for everything that goes on in this killer tire movie.

Rubber is plenty of things: B-grade, funny, quirky, and a little bit subversive…but it isn’t to everybody’s liking. The film finds itself walking the tightrope between arthouse and B-grade horrors, and ends up somewhere in between funny and unsettling. If you are one of the few like me who can let go of cinematic reason and just observe, it’s an interesting experience; however the majority of audiences will probably watch for half an hour, shrug, and walk away.

The plot is predicated on the fact that there is no reason, and therefore everything in the film is possible. In the middle of the desert, there is an animated tire that has discovered it has telekinetc powers: it can concentrate its energy on an object and cause the object to explode. While the tire initially uses this power to destroy cans and bottles, it soon realises that it can destroy living things: birds, rabbits, and humans. It wanders to a nearby highway, where it sees a beautiful woman drive past…and surprise, surprise, the tire becomes obsessed with this woman and follows her to a hotel to watch on her. Meanwhile, there are a group of people with binoculars a little while away, watching the tire and its story as it unfolds, much like the audience watching the film in the cinema. 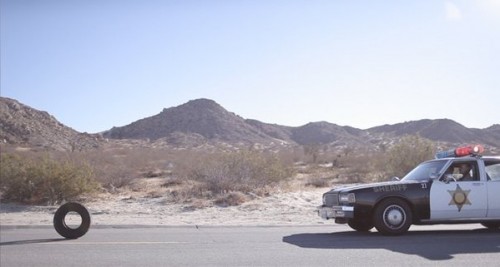 This shot pretty much sums up the entire film: killer tire vs. the world.

Yeah, the storyline needs a big question mark stamped straight over it. Of course, it doesn’t make sense at all, and Quentin Dupieux seems to count on the nonsensical ways of the film to score some easy laughs with the viewers. While the idea of no reason is charming and comedic in the beginning, it quickly spirals into a big dose of confusion and doesn’t reappear as comedic until the last ten or so minutes. With that being said, though, I have to give Dupieux a million and one brownie points for originality: there is absolutely no way that anyone could wander into this film and know exactly what is going to happen at the end.

Without giving away too much, I do have to add that I think this film says something deeper about all movies which try to follow the classic Hollywood narrative. It can be shrugged off as something that just tries to be silly and comical, but what I have learned about a lot of B-grade filmmakers is that these films will, on occasion, try and make a point. Dupieux is great at breaking down the boundaries between spectator and character, between the real and the constructed, and creating some laughs while he’s at it.

Since the main character is a tire, it can be hard to understand that the film is actually quite relatable. In fact, one of the spectators in the film summed up my sentiments perfectly: “It’s the first time I’ve ever identified with a tire”. The tire is funny, charming, and even though it’s on a major power trip, it’s not evil. In fact, Dupieux gives the tire enough human qualities to validate it as a legitimate character, and I have to say that it was most definitely my favourite in the film. Girls will like the tre because it falls over and makes funny noises, and guys will like the tire because it stalks the really hot girl. 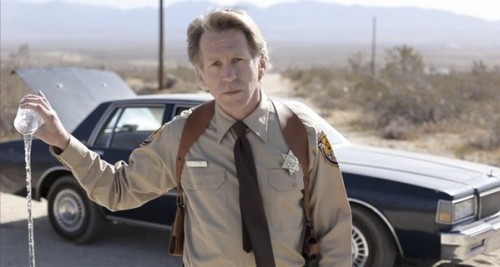 I’m pouring this water…for no reason.

The rest of the characters ranged from terrible to brilliant, but in a B-grade movie that’s to be expected. The policeman who introduces the film reminds me of Craig Ferguson: someone who knows how silly the movie is, and therefore just goes along with it. The acting of some spectators was a little exaggerated – almost to the point where it seemed they were trying too hard to be funny -, but I suppose Dupieux would argue that they are supposed to be that way (for no reason, of course). Really though, aside from the tire, a few spectators, and the policeman, I felt the other characters were negligible and I probably wouldn’t have missed them if they all spontaneously disappeared from the movie.

The best part about Rubber was its cinematography. Being able to make a film about no reason meant that Dupieux could also make it beautiful for no reason…and that’s exactly what it is: visually stunning (minus the animals and humans exploding). Because a lot of the film depicts the tire’s journey through the desert and its discovery of its telekinetic powers, it really did need to be presented well in order to keep the audience’s interest. From the high contrast to the slight sepia tones which sometimes seep through, this film really makes the most of its setting. The tire is also brilliantly animated, and Dupieux does, as I mentioned before, give the tire a sort of lifelike quality through the animated movements. 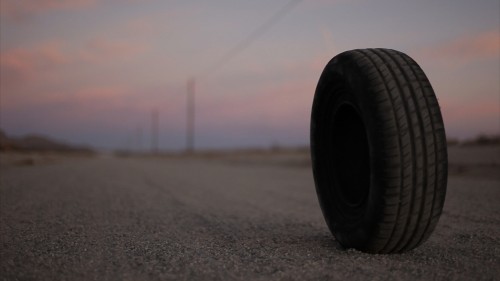 Soundtrack-wise, the film is interesting and while the soundtrack suits the film, I’m not sure how I feel about it. The music is akin to that used in arthouse films – straight out of the book from indie films, in my opinion – but sometimes is adjusted to conform more to the horror genre. What Dupieux has done here is create a unique tone to an already unique movie, and provide what can only be described as a new experience. The sound effects are pretty standard, although the sound the tire makes when telekinesis-ing is extremely entertaining and very likely to get stuck in your head.

The DVD came with a few teaser trailers, the original trailer, and a few Madman trailers. Suffice to say that this DVD really wasn’t jam-packed with a lot of goodies to watch after the feature had finished, but in all honesty I don’t think I would have wanted to watch any extras anyway. For 70 odd minutes, the film felt ridiculously long: my brain was absolutely exhausted from all the lack of reason and switching from no reason to a normal “making of” would have been too much to bear anyway.

Rubber surely was an interesting experience, but I’m not sure I could do it more than once. It’s a film that’s more comedy than horror and more nonsensical than logical, and Quentin Dupieux has really got me baffled on this one. What he was going for, I’ll never know…but I suppose the real beauty of this movie is that there is absolutely no reason at all, and maybe the point is that sometimes a lack of reason can be okay.