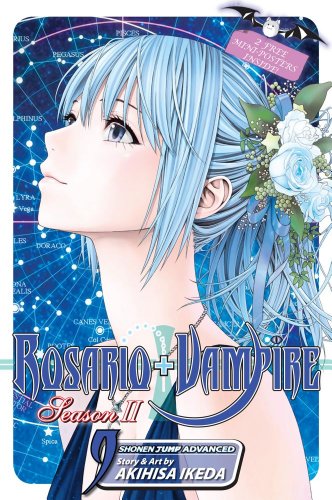 Overview:
It is standard practice for a manga to introduce a powerful new force which is capable of soundly defeating every main character, leaving them with barely any life left in their bodies. This usually then leads into the cast doing everything that they can to try and become stronger and defeat this new opponent. While Rosario + Vampire Season II may originally have been billed as a romantic-comedy with elements of action mixed in, the series has seen quite an increase in action, with Volume 8 being no exception.

Those curious about our review for Volume 8 can find it here. Now that Rosario + Vampire Season II Volume 9 has hit shelves, does the heavy atmosphere of combat continue or will it provide readers with some new romantic developments between characters?

Story:
Volume 9 picks up immediately after the end of Volume 8, throwing readers into the middle of the battle between the seemingly unstoppable Aqua and LingLing who may be Tsukune and the group’s only hope of protecting Moka from Fairy Tale, a group that appears hell bent on kidnapping Moka for their apocalyptic plans. With LingLing and Aqua battling against one another, Kurumu just barely manages to rescue Tsukune, Mizore and Tohofuhai from Moka’s seal. However all of their struggling is for naught with the wave of Aqua’s hand and a sinister trick that stays the angry group.

After witnessing just how weak he truly is, Tsukune swears that he will do anything that he can to save Moka from Fairy Tale, even if it means risking his life. However with Tohofuhai taking charge of the training, his life may very well be the cost of power. Can Tsukune possibly survive such torturous training and can the rest of his friends become strong enough to take on the powerful Fairy Tale and save Moka?

With the finishing of Moka’s backstory last volume we have a stage set for the beginning of a mild training arc accentuated heavily with fast paced action. From the battles with Aqua and the twist that Tsukune’s training takes, there is no shortage of fighting throughout the volume. On the other hand, the humor of Rosario + Vampire does return slightly as we have a few breaks in the action for small jokes made at the expense of Aqua or Tohofuhai.

Volume 9 also sees the solidification of a number of Tsukune’s harem members, with Mizore and Kurumu having to come to grips with Tsukune’s sudden heartfelt confession in Volume 8. This is a nice piece of character development for these two who have been given smaller segments of the story lately. Along these same lines, readers will also witness Aqua go through a number of bi-polar changes in personality, which raises a number of questions about what exactly made her who she is today.

Artwork:
With an action heavy volume such as this one the story’s artwork has remained pleasantly consistent and well detailed throughout. These fights are well drawn and the emotions that the characters are feeling are very evident in their faces as it seems that Akihisa has went through quite some effort to detail these faces, some of which can take up page-sized panels. The final few pages are especially worth mentioning in their quality though what they happen to feature is up to you to read for yourself.

This time around Volume 9 includes what is described as two mini-posters, however it is simply one poster which is double sided. This is a bit unfortunate for those who would want to use both images, as one side features Tsukune with a slightly opaque Outer Moka standing against his back while the other features both Mizore and Kurumu in their swimsuits.

Overall:
With Moka’s past revealed, Rosario + Vampire Season II Volume 9 successfully capitalizes on the cliffhanger from the past volume by bringing readers plenty of action, some interesting character developments while also weaving a bit of comedy within the dramatic turns that the story has been developing over the last few volumes. Volume 9 doesn’t leave off with much of a cliffhanger, instead ending in a resolution which will leave fans eager to see the outcome in of such a resolution in Volume 10.