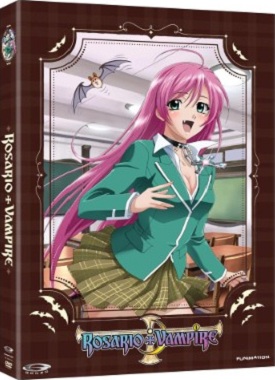 Overview:
While there are genres of anime such as shōnen and slice of life that are widely popular among anime viewers there is another anime genre that is just as adored by the anime viewing public. That genre is the harem one, which usually features a cast of female characters surrounding one male and either liking him or falling in love with him in one way or another.

A manga written by Akihisa Ikeda began in 2004 and began a second run in 2007 to continue to advance the storyline and that manga is Rosario + Vampire. With its unique set-up Rosario + Vampire became a big hit in Japan and received not only one anime season but two. Now FUNimation has brought over the first season of Rosario + Vampire which originally aired in Japan in 2008 and with its new English dub how does it fair?

Story:
Tsukune Aono is a down on his luck teenage boy who just can’t seem to get accepted into any high school in the area. Even though all of his friends were accepted into various schools, Tsukune has to wait a whole year to try and enter one of them again. Returning home to give his parents the bad news, they actually have great news for him, his father happened to find an accepted application to an unknown school known as Yokai Academy. 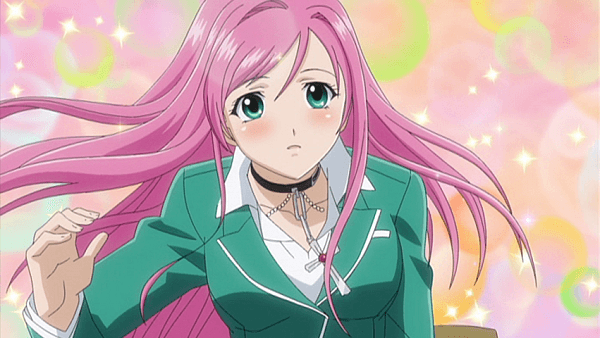 After enrolling and being dropped off by a strange bus driver, it is obvious that something is a bit off about the area around the school. Unfortunately he has no time to wonder about that as he is run over from behind by a girl with pink hair riding a bicycle. This girl is named Moka Akashiya and she explains to him that she is a vampire and has the most delicious smell she has ever smelled.

Not believing her little story, Tsukune simply goes along with what she is saying until she bites him on the neck and drinks some of his blood. As the two arrive at the school Tsukune quickly realizes that he isn’t at a normal school and in fact is the only human student attending a school specifically for monsters to learn how to co-exist with humans. Problem is… if any human were to show up at Yokai Academy they would be quickly killed by the monsters living there. Can Tsukune keep his secret while staying alive at a school for monsters?

At its very heart Rosario + Vampire is a harem comedy but it takes the genre and throws it for a loop with an interesting setting and the fact that all of the girls that begin to pine for Tsukune are various monsters. Now being a harem type anime, Rosario + Vampire also suffers from a very formulaic pace where the first few episodes are mostly dedicated to revealing one girl at a time, usually being an enemy at first and then falling head over heels for Tsukune by the end of the episode. 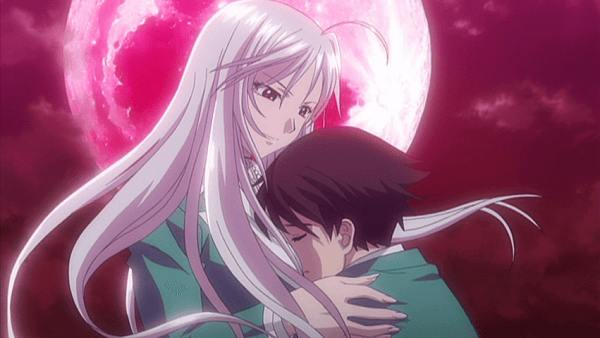 The episodes themselves are also usually formulaic as well, as nearly every episode follows the same pattern with a problem or girl being introduced in the beginning of the episode, with Tsukune or the girls in trouble and then will end with Inner Moka finishing off the threat with little trouble. Only the last five episodes of the series deviate from this structure and it is problematic that the change occurs so far into the series.

One thing saves the story of Rosario + Vampire however, and that is the cast of characters and the girls themselves. While most male characters that the girls fall for in harem anime are usually spineless or extremely dense, Tsukune often appears quite aware of the girls around him despite never acting on any of their feelings other than those for Moka. Besides Tsukune we also are treated to one of the biggest split personalities in an anime I’ve seen in Moka. Moka’s monster form is that of a vampire, but her powers only are unleashed after the rosary on her chest is removed. Inner Moka is much more serious and cold towards others but still shows a soft side for Tsukune while Outer Moka is easygoing and clumsy but values her friends and Tsukune immensely, though she certainly loves drinking Tsukune’s blood multiple times per episode.

Besides these two lead characters the other girls in the harem serve to provide plenty of comedy and of course fan service. Rosario + Vampire has quite a large amount of fan service through bouncing breasts and panty shots galore so much in fact that at one point I was able to notice a discrepancy in an action sequence thanks to one girl’s panties changing color between scenes. Now there is no actual nudity in Rosario + Vampire and the most risqué it ever gets is through swimsuits or panty shots so if you enjoy that you’ll find plenty of panties to love here, or if not there is still a lot to love in the characters themselves. 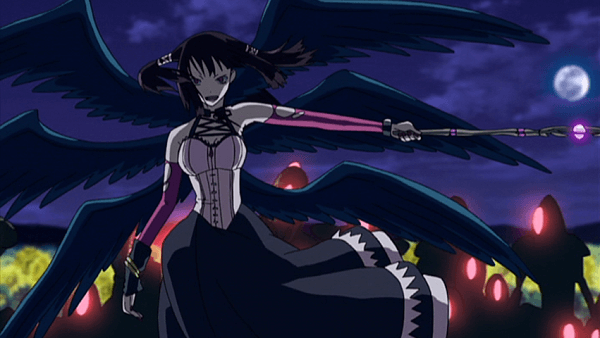 Along with Moka, a number of the other girls fall outside of most character archetypes for a harem anime and I found it easy to pick favorites between them with their diverse personalities and actions. For example, while one of the girls has large breasts and takes every chance she can get to make fun of the flat chested girl and press her breasts onto Tsukune she receives a decent amount of emotional development that pushes her character beyond just one with large breasts and into the spotlight. That doesn’t even touch upon the fact that one of the other girls loves Tsukune so much that she’ll go to the ends of the Earth to stalk him and usually spooks the other characters whenever she pops out of nowhere.

Visuals:
The studio responsible for creating Rosario + Vampire is Gonzo and they most certainly have done a wonderful job with the animation for the show. The characters themselves are beautifully animated and each have a unique style of their own. While other shows the characters may only look different from the shoulders up, each character in Rosario + Vampire’s unique appearance from one another is a breath of fresh air and this then only heightens the joy most fan service fans will receive whenever something happens to their favorite characters. 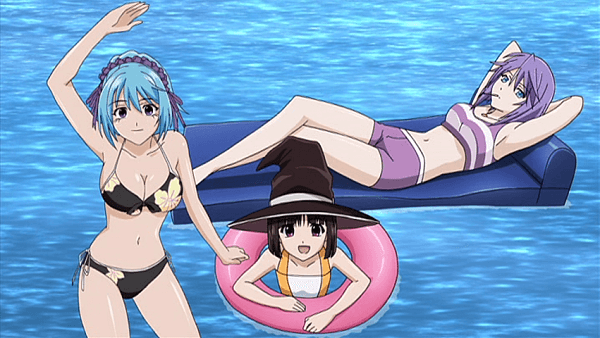 Besides the characters themselves, the action sequences have consistent quality and smooth transitions from scene to scene. To make things even better the backgrounds to each scene are very well drawn and while most are a bit dark in appearance, it only helps to highlight the bright color palette used for nearly all of the characters.

Audio:
FUNimation’s release of Rosario + Vampire has included both the English and the Japanese dub but unlike where I would recommend the listener to choose the dub they prefer to listen to, instead I am firmly behind the English dubwork provided by the voice actors at FUNimation. To be precise, most of the Japanese voices do sound alright, but their voice work pales in comparison to the performance by the English cast. Tsukune himself is a prime example of this, whereas his Japanese voice is barely distinguishable from a girls but his English voice is perfect for the role he plays. That being said, there are still a few characters performed well by the Japanese cast such as Mizore and Inner Moka. 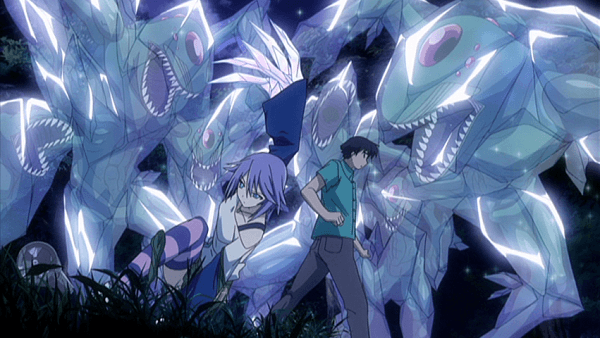 To make the English dub even better, all of the various inserted songs that are not only sung by the characters themselves but even the background music with vocals has received a full translation into English. The insert songs themselves are a nice listen though the song in the final episode was too faint to hear which is a bit of a disappointment.

As for the Opening and Ending songs, they are both still in Japanese and they are “Cosmic Love” for the opening and “Dancing in the Velvet Moon” for the ending. Both songs are performed by Moka’s Japanese voice actress Nana Mizuki and the songs fit up perfectly with their animations. Both songs are also quite enjoyable to listen to, though the ending song turned out to be my favorite between the two.

Extras:
Unfortunately as far as extra features go, Rosario + Vampire falls very short in this regard. The only extra included on the disc are your standard trailers for upcoming and past FUNimation releases and the clean ending song “Dancing in the Velvet Moon.” This is disappointing, as the visuals for the opening song would have benefited immensely from having at least a clean version included. Besides that each menu picture has a different girl on it, but that is all. 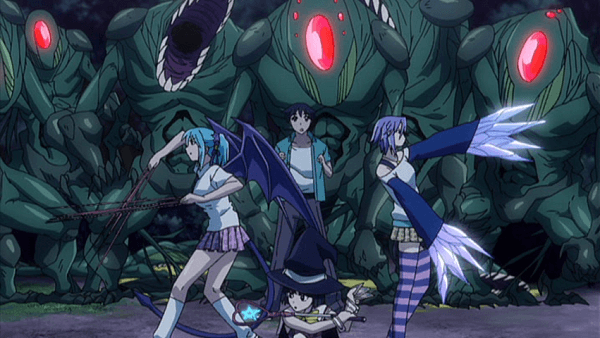 On the other hand there are a few more extras included with the Limited Edition version of the title including a collectible art box and an art booklet that contains a centerfold of one of the girls. Unfortunately I was unable to see this art booklet for myself so I cannot address to its quality, though it should be noted that the Limited Edition only costs $5 extra than the standard version.

Overall:
Rosario + Vampire takes a genre that is usually quite formulaic and helps break at least a few of the shackles that hold it back from being great. There is plenty of comedy to be hand as well as action mixed in as well with a spice of fan service thrown in every minute or so. The Tsukune and Moka make a perfect pair of lead characters while the other girls’ personalities and design create quite a conundrum for fans as they choose who to root for. Unfortunately Rosario + Vampire stumbles slightly by having a slow developing story and a formulaic episode pattern that becomes too predictable at times. Still, Rosario + Vampire creates a monster mash unlike we’ve ever seen before… especially for Tsukune.