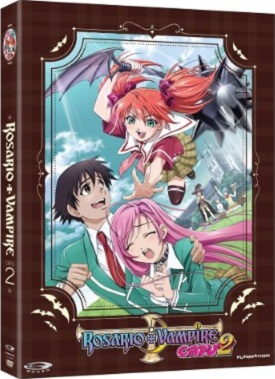 Overview:
Sometimes when an anime receives a second season it will continue to flourish and carry on the storyline from the previous season. A few of these anime may treat the second season as a simple continuation of the first with little to no difference in-between the two seasons. There are some however which may continue the story but also simply forget a few things about the past season altogether.

Story:
Tsukune Aono may seem like your average high school boy and you would be correct to assume that he is. It just so happens that the high school he is attending is anything from average. In fact, it is so not average that everything inside would be quite horrifying to a normal person just walking inside. The reason for this is that his school is Yokai Academy… a school designed just for monsters. 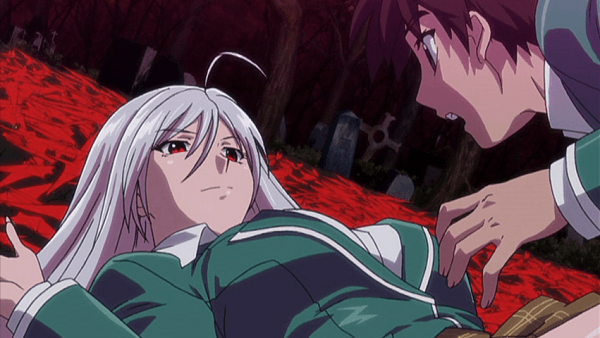 Now after the events from the first season Tsukune has managed to fit in quite nicely at the school and has found a number of friends who stay by his side. Not only has he joined the Newspaper Club but practically every friend that he has made wants to go out with him at the same time. These girls are Kurumu Kurono, a succubus, Yukari Sendo, a witch, Mizore Shirayuki, a snow woman and Ruby Tojo, another witch. All of these girls pale in comparison to Moka Akashiya, an S-Class monster… a vampire.

Now Moka may appear to be your standard airheaded girl who just so happens to love drinking Tsukune’s blood whenever she gets a chance, but once the rosary on her chest is removed her full vampire powers awaken and she changes into Inner Moka, a white haired and extremely powerful girl who can defeat even the most difficult looking enemies with a simple kick. But at the start of the school year, a new force approaches the school… one that even Moka may be unable to defeat.

Shortly after Tsukune and the rest of the girls have begun the new school year, a freshman begins leaving bat shaped letters threatening Moka’s life. Mizore, Kurumu and Yukari begin seeing a violent and rude twin tailed girl moving about the campus, and she seems to have a strange attraction to Tsukune’s blood as much as Moka. During a major commotion during the school’s entrance ceremony it is revealed that this new girl who has been threatening Moka is none other than Kokoa Shuzen… Moka’s step-sister. With sibling love only running so deep, Kokoa is looking to wipe Moka off the face off the Earth and anyone else who gets in her way. What can Tsukune and the girls do? 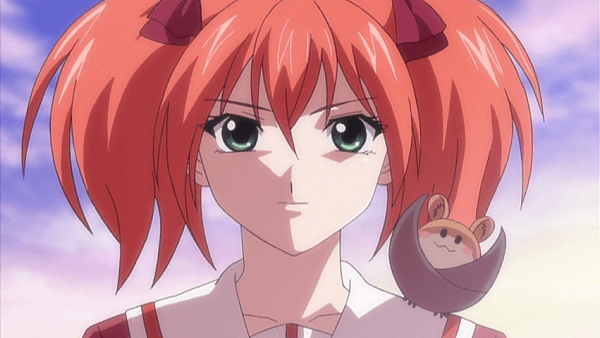 Rosario + Vampire Capu2 has the advantage over the first season in that every main character has been introduced to the viewer already so that means that the story can begin moving at a much faster pace than it usually would. Unfortunately Capu2 rarely takes advantage of this extra time for plot development and in the end the story devolves into simple episodic affairs that do little to advance the storyline.

There are hints of story progression in Capu2 but unfortunately that is few and far between. Plus, thanks to the occurrences at the end of the first season, one of the biggest threatening points of the entire series has been removed and is never revisited again throughout the entire series besides one episode focusing on Tsukune’s home as his mother meets all of the girls surrounding him. With no overarching storyline or problem the story feels like its being weakly strung along with barely structured encounters.

The girls themselves are still as unique as ever though and are truly the highlight of the entire series. What becomes a disappointment however is the fact that none of the girls are given much in the way of character development. While new family members are introduced for nearly all of the girls in Tsukune’s harem, only a couple of them receive any actual character defining moments where they either express themselves openly or take a stand for themselves. Instead most of the time the series follows a rather simplistic formula that is even mocked in one episode, with one character claiming they forgot something and forces Tsukune to summon Inner Moka just to keep everything the same. 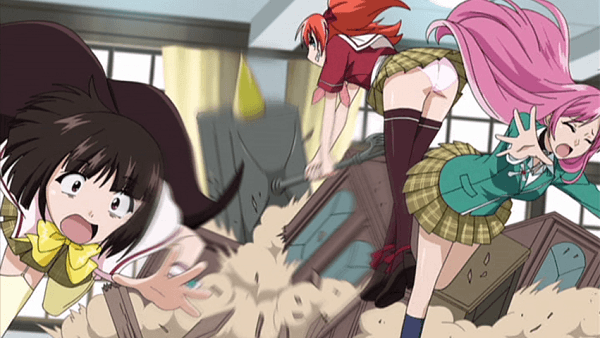 Now with the story element toned down, the fan service has received a level up. While the first season may have had plenty of fan service with a panty shot from one of the girls occasionally or large breasts being pushed against Tsukune quite often, Capu2 takes it to the next level. Those eager to see plenty of fan service need look no further than Capu2 as there will be plenty of panty shots in every episode, usually from every one of the main girls no problem. Plus, unlike in the past season, there is actual nudity in Capu2 as well in the form of topless girls with their nipples visible in various scenes so expect to see some mild nudity.

Visuals:
One of the first things you will notice when you begin watching Rosario + Vampire Capu2 is that Gonzo must have received a much higher animation budget compared to the original season. While the quality of the animation in Rosario + Vampire was already impressive, Capu2 takes it a step further by providing some of the most consistent and impressive animation you can find which is extremely hard to do, even for series that usually focus on drama rather than comedy and fan service. 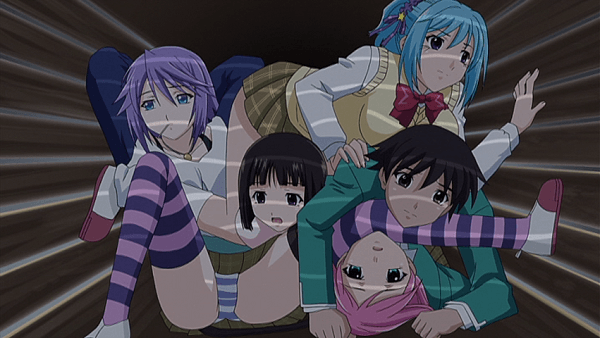 As I mentioned in the past review the characters and the combat scenes is where the animation truly shines. None of the girls are similar to one another in appearance or even in the outfits that they wear which is a must for a show such as this. Plus whenever the girls must enter combat their monstrous powers awaken and look wonderful when used in combat situations. In fact, even though Moka’s transformation sequence is well done, it is a shame whenever she enters a battle as it usually means we won’t be seeing Mizore, Yukari or Kurumu fighting for much longer.

Audio:
The whole cast of English voice actors have reprised their roles for Capu2 and this is the same for the Japanese voice cast as well. The most notable introduction to the series is Kira Vincent-Davis’ voice work for the newly introduced Kokoa. Kira does a great job for the character which can instantly switch from being extremely angry and wanting to kill everyone in sight to loving her older sister in an instant. The rest of the cast does as great of a job as the first season and kept a consistently high level of quality throughout the show. 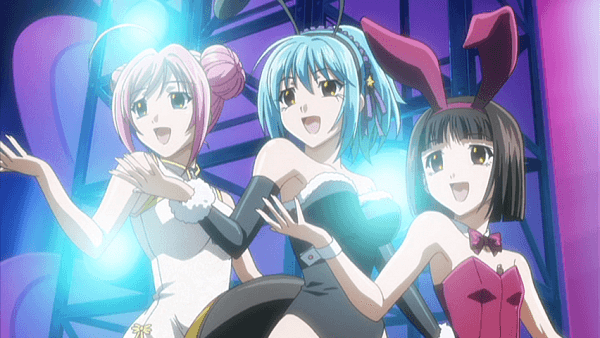 One thing that I grew to love in Rosario + Vampire Capu2 and its predecessor was the various inserted music clips that would play during certain scenes of the show. These background music pieces are inserted at various parts of the show whenever a certain mood is portrayed and seem to always elevate the scene. Another nice inclusion are that all of the inserted musical pieces with vocals have received full English dub as well which is always a plus.

Now while the inserted songs are good, the opening and ending songs of the show are of another tier entirely. Both the opening and ending songs have been performed by Nana Mizuki, the Japanese voice actor for Moka Akashiya and these sequences are both visually and audibly amazing. The ending song “Trinity Cross” has a heavy gothic feel to it while the opening “DISCOTHEQUE” is perhaps one of the most unique openings I have seen in many years. Now while the opening itself may not have anything to do with the plot of the series, the production value and song itself is amazing and unlike anything I’ve seen in recent years.

Extras:
As standard with a FUNimation release, Rosario + Vampire Capu2 comes with a number of trailers for past and upcoming FUNimation releases. Besides this there is also a clean version of the opening and ending song which, for this series specifically, is a great bonus. While the animation for “Trinity Cross” only takes minimal advantage from the creditless display, watching the opening “DISCOTHEQUE” without any credits is certainly a treat. On the other hand, it is disappointing when you realize that there are no other bonuses included in this package besides those sparse extras. 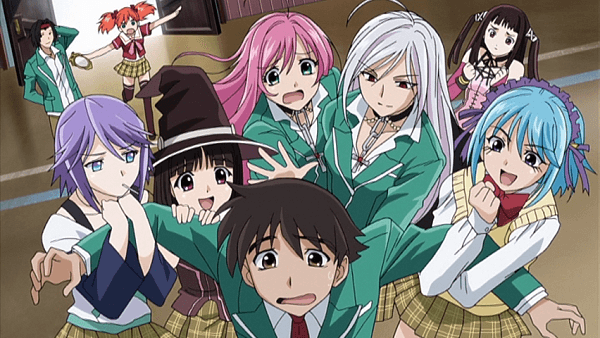 Overall:
Rosario + Vampire Capu2 has a significant advantage over its first season in the fact that nearly all of the characters and their powers have been introduced and the animation quality is even better than before. Unfortunately it fails to take advantage of its extra time and even tones down on the action while bringing even more fan service to the table. Tsukune and all of the girls still are the best part of the anime and the fact that most of them receive a few episodes focused almost solely on them is best for those who have a certain favorite, but unfortunately too little character development holds back much of the enjoyment that could have been found in Capu2. All in all, Capu2 still capitalizes on its interesting setting and enjoyable characters and creates a harem comedy unlike what we’ve seen before that still presents plenty of entertainment.