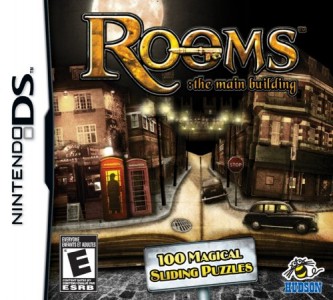 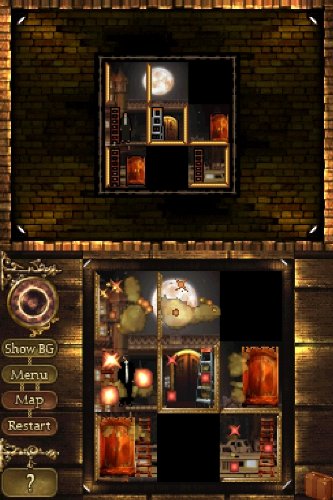 In Rooms: the main building you play as Mr. X, an unfortunate man who was sucked into a strange world after reading a mystical letter. Now you must escape by ploughing through the vast array of enigmatic rooms in order to unlock the puzzle of the rooms to return home… Hold on… Get that pistol out of your mouth! All hope is not lost, for you have the imaginatively named Mr. Book by your side. This talking book has near encyclopedic knowledge of the puzzle world, and it is his helpful introduction to new objects found in the rooms, as well as his steady stream of useful advice that will aid your escape.

Rooms: the main building is a game of many different attributes. Much like a jigsaw, it is made up of a number of different pieces; there’s the core gameplay, the puzzles in which you have to slide the tiles to complete the background image, at the same time reaching the exit, thus completing the room. But outside of these puzzles in story mode, there are mystery-solving point ‘n’ click aspects evident too. As the game is controlled 100% by touch screen controls, much like a point ‘n’ click titles, you find yourself manoeuvring around the screen by tapping where you want to go, examining and picking up strange objects which, along with some logic, are needed to progress onto the next stage. You do a good deal of puzzling in the central-hub world, as well as in the actual puzzle rooms themselves. But that’s not all. As if the variation wasn’t enough in the story mode, there is also an additional Challenge Mode, as well as a full-blown level editor entitled ’Build’ (more on these later). 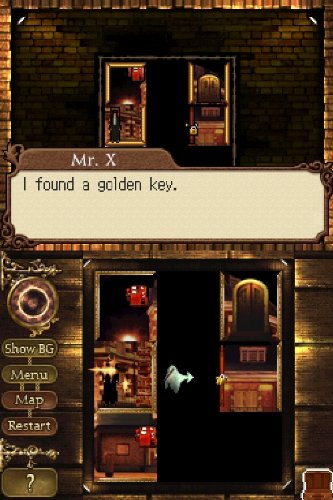 But first, the story mode, which promises to keep you busy for quite a while with four mansions to work your way through, plus extra mansions bundled on at the end. The actual story aspect of it seems very latched on, and watching the drawn out cut scenes is a time-consuming affair. Also, given that a lot of people want to jump into a puzzle quickly and easily, the inclusion of these underwhelming cut scenes is unnecessary. It’s good to have some background as to why you are traipsing through all these puzzle rooms, but the plot just feels a little overdone for a puzzler.

However, what the game lacks in story, it makes up for in gameplay. The game is slow to get going with the initial introductory puzzles feeling almost as drawn out as the cut scenes, but once it picks up there is some thought-provoking puzzling on offer. Each level has a difficulty rating out of 5 stars, and it is only when this starts to rise that the game really comes into it’s own. Also, with the gradual dispersal of new items in the rooms, you never feel like you are grinding through levels- it always feels fresh. 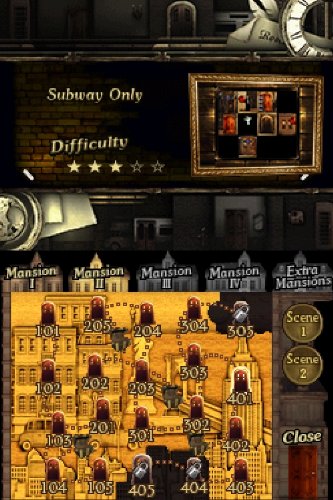 As you progress through the rooms (levels), along with a bit more clue-finding and puzzle-solving in the central hub area, you in turn unlock new mansions (stages). In this respect, there is a lot of content on offer, which is great value for money. You can then play through certain rooms again in order to get perfect on every one. Fully completed rooms are marked as gold, whereas levels which you have merely passed will be shown as silver. This means (for perfectionists especially) there are many added hours of entertainment to be found here.

Moreover, there’s the challenge mode which ups the difficulty through the introduction of time limits and restraints on the number of moves you can make, ideal for those who didn’t find the story mode taxing enough. Furthermore, ‘Build’ mode can provide an extra lease of life into the game, due to the option to exchange your own personal puzzles with a friend. Sadly, there is a limit on the number of levels that can be saved; to the tune of the rather undersized figure of 10, which is a shame. With a bit more space and a creative set of friends, the level editor alone could’ve provided near-infinite hours of enjoyment. 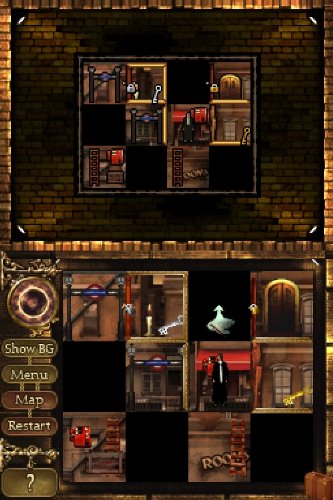 Overall, Rooms: the main building is a slow-starter but once it gets going top-notch puzzling ensues. Long-winded cut scenes and a pointless plot plight the story mode, although the puzzling aspects are fun, and the harder ones refreshingly require a use of your logic. The visuals are poor, so much so in fact, that the blurry screens can sometimes lead to your confusion. However, this is made up for by an atmospheric and well-stylised musical score which sets the mood for the game perfectly. There is a slight overuse of some generic sound effects, but I suppose we can let them off based on the quality of the other half of the sound. Besides, the large the amount of content promises to provide hours of play time, and as a result the game is good value for your hard-earned cash. It’s hardly an essential purchase, but if you’re looking for a solid puzzler, you could do a lot worse than pick up Rooms: the main building, which is why I’m giving it: