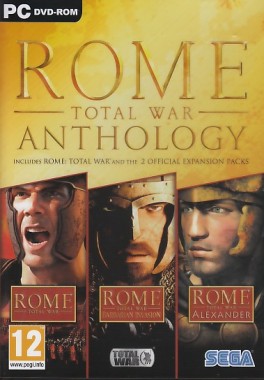 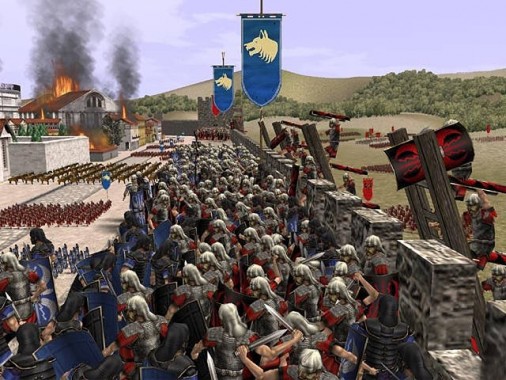 Overview:
Welcome to Rome. Welcome to war. And now, welcome to 2004. Back then, playing Rome: Total War meant going to the past in the sense of recreating the great Roman campaigns rather than in the sense of revisiting an older game. But hasn’t it aged well? Avanquest Software has helpfully compiled a comprehensive edition of the game for pseudo-Caesars, featuring Rome: Total War and the Barbarian Invasion and Alexander expansion packs, all at a budget price of £20.

Story:
Both through a number of given historical battles and a free-flowing, long-winded but thoroughly enjoyable roaming campaign mode, you live out dreams of being a Roman general. Your orders sculpt every aspect of your campaign, from where to strike enemy forces in battle to where on the map to direct the expansion of your empire first.

Rome: Total War Barbarian Invasion sees a shadow cast over Rome; the unified empire died with the last Emperor and it’s every man for himself. You stuck with Rome through the glory days and now the barbarians are here you must lead your people through the darker days. The second expansion pack, Rome: Total War Alexander, challenges you to better one of history’s legendary war generals as the map expands beyond the regions that acted as your playground in the first two iterations. Like Barbarian Invasion, the expansion pack introduces a number of new factions and troop-types, but now you take up a new East-bound heading to Macedonia and the Persian Empire. 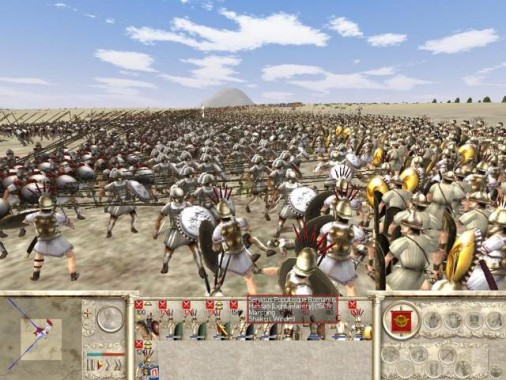 Gameplay:
One of the reasons Rome: Total War has lasted so well and still stands its ground amongst other more modern titles is it was so ahead of its time and one of the leading strategy games on the market back then. It did the basics well but at the same time was an innovator, offering scale and depth to your warfare that hadn’t been done before. Even now it’s still impressive how it seems to have a system for everything, from sieges and soldier formations to advancing your civilisation and generating a profit. Yes, the graphics haven’t held up quite so well, but its past prowess has put it in good stead for the current day as over half a decade on it’s still as playable as ever.

In combat the game comes to life; battles can be lost with one bad move just as they can be won with one show of quick-thinking. Also, visually it comes alive. Cavalry, foot soldiers with all manner of weapons, and special units like war dogs and armoured elephants do battle to stunning effect, the overview of hundreds, almost thousands of troops in varied, natural (an in the case of a siege, man-made) surroundings enough to bring out the war general in all of us.

There’s a start phase where you get to organise all your soldiers involved into formation before you commence the battle. The fight then wages on in real-time, unless you utilise controls to fast-forward if it’s a little slow going or pause time if it’s getting too hectic. The battle is won when the enemy retreats (ruthless leaders can give chase and chop them down up to their red line of safety or, in the case of a siege where there is nowhere to run, when the last man falls to the ground and the settlement is claimed.

Newbies are eased into proceedings with a prologue mission in which the ins and outs of the battle controls are explained. Thereafter, optional advice is given for battle and the goings-on in the campaign map when the game feels you could use some pointers. A magnifying glass button takes you to the point of reference. 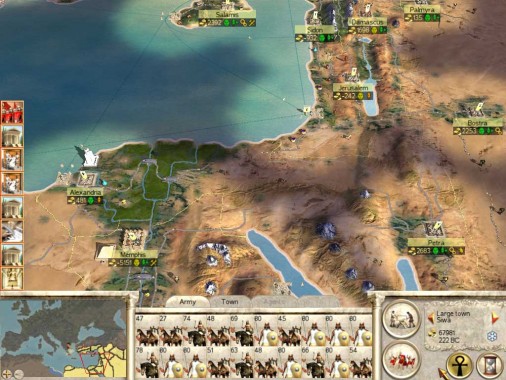 Open war is only one part of the game. A section of a world map plays host to a sort of living and breathing board game. You, your Roman allies and all other factions take it in turns to move you forces, although it doesn’t stop at just moving armies around the board. You are responsible for managing all the settlements you control; setting the tax rate, build schedule and soldiers to be trained or recruited.

Also, in this turn-based phase you’ll have agents like spies and diplomats under your control. Spies can be put to use to get a sneak preview of enemy units before you go charging off into battle with them, whereas diplomats can negotiate to find a peaceful solution, establish trade routes or widen your knowledge of the map in which unknown areas are dark and unlabelled. You also receive missions from the senate which, though aren’t a total necessity, carry a reward for successful completion.

As you can imagine, this campaign map part of the game is as tactical as the actual battles, if a little less action-packed, and has just as vast a scale as the set pieces in the way a war of attrition with one faction can wage on for ages until a victor finally emerges. It works so well that this aspect of gameplay doesn’t feel like a stop-gap between battles, the only inconsistency in quality coming in the form of naval warfare. While it shows just another string to its bow that you can take off in fleets of boats, transporting armies and engaging in naval warfare, the actual combat at sea hasn’t even been attempted. Instead, all boat-to-boat battles are simulated and done in a couple of seconds based on probability, the same as if you choose to sim a battle inland instead of fighting it. 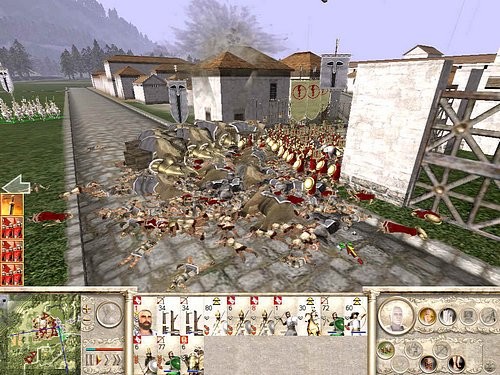 Visuals & Audio:
Visuals and audio are two aspects of a game that deteriorate with time. Fortunately, it hasn’t reached a point where they seem so dated as to make the game unbearable. Instead, it’s just something you notice but are relatively unaffected by. The game allows you to zoom right in to battles to see the action unfold at ground level, and it’s only here you even realise shortcomings. In fact, the sound effects have held up well, the only problem is the in-game animations don’t always match them. Loading screens all carry a proverb or quote from that era too, which is a nice touch.

Overall:
Fro the amount of playtime on offer in this three-way bundle, it works out as very cheap entertainment. Even though it is getting on, it hasn’t yet reached its yield point and the gameplay’s as good as it ever was. Sometimes it’s worth delving into the back catalogue to unearth some truly brilliant games, and this comes with a strong recommendation for lovers of the Roman era of warfare and tacticians who may have missed it the first time round. What better time to pick it up than on the eve of the release of Rome: Total War 2 in preparation for the sequel.