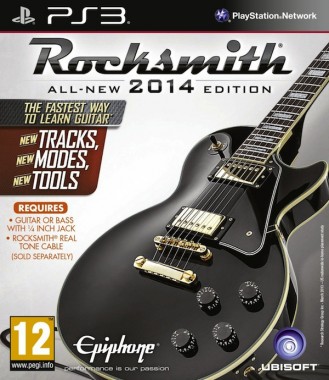 Rocksmith 2014 Edition is the second iteration of the virtual guitar teacher from Ubisoft. The original Rocksmith suffered from numerous flaws in presentation and interface in particular, but the 2014 edition aims to rectify all of that, along with providing a more robust, detailed and comprehensive learning environment and experience. With the new Session Mode, expanded line-up of fun side-games in Guitarcade and a broader, more complete Lessons section, can Rocksmith 2014 Edition further amplify your skill-set?

Plugged-in via your 1/4″ to USB audio jack cable? Then you’re good to go… but where to first? There is a lot of content in Rocksmith 2014 Edition, although the Lessons section – naturally – is as good a place as any to begin. Here, you will be taught everything from putting on the strap and correctly wearing your instrument (you’re not given a score at the end… imagine being rated for your ability to hold a guitar!) to the other extreme end of the spectrum, filled with expert techniques. 85 lessons in total will guide you in perfecting harmonics, palm-muting, chords and so much more. You are able to replay any video tutorial and retry the Practice Lesson at their conclusion – which acts sort of like a final exam of the technique you’ve just practised – until you nail it with 100% accuracy. 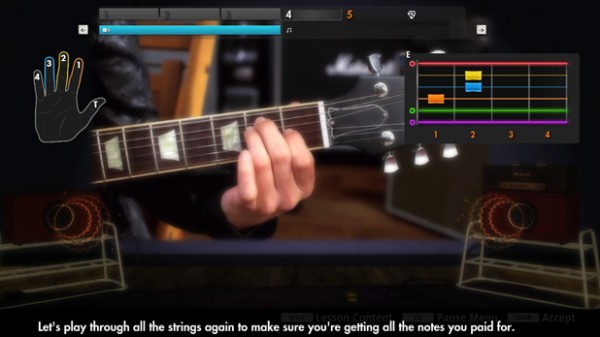 Completing a lesson one time over doesn’t grant you 100% completion, however, as the practice track just gets progressively more complex – without veering into too difficult territory… that’s for class 201 and so on. This is thanks to an integrated mastery system whereby your success in hitting a string of notes will up the difficulty level of the next bar or phrase. It dynamically matches your skill level, or at least, what it perceives your skill level to be. And feedback is now more specific and actually helpful. If you’ve made a mistake, you’ll be told about it. In Riff Repeater, missed notes will have an “x” appear over them so you know exactly where you flubbed it.

Riff Repeater is fully customisable, allowing you to specify the tempo, difficulty level, error tolerance, repetitions and even lets you auto-continue straight back into the rest of the song should you master said section. It’s the best tool to have at your disposal should you have trouble with a specific phrase or riff. My Path lets you, on-the-fly, toggle between playing the lead, rhythm or bass. Some songs will disappear if they do not feature a certain arrangement. If using an electric guitar, you can still play ‘simulated bass’, which is a great touch. You will be constantly reminded of your current Missions at the top right corner of the screen, which sometimes lead to unlocks and rewards, such as new skins for your virtual amps, fresh fretboard symbols and larger arenas. 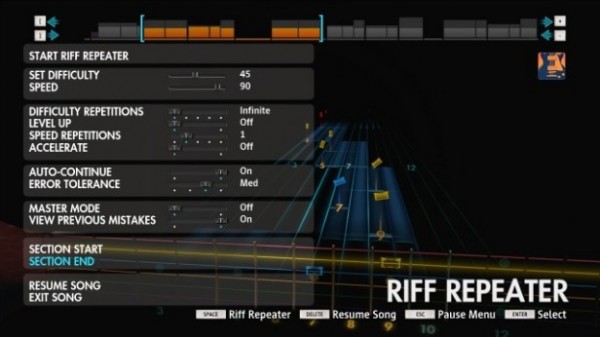 In Learn a Song, you do just that. Following the same dynamic system found in the aforementioned Lessons mode, the better you do, the more complicated and closer to the master track you will reach. Underneath a given selection, there will be three recommendations. Undertaking these tasks is deemed to be helpful in managing the properties of the respective songs. E.g., “Learn Chord A5 in the Chord Book” will pop-up if the song in questions features this chord. Once you’ve mastered a song, you can then attempt to play it without any visual cues. Master Mode as it is aptly titled, will, however, fade-in the notes if you fail to manage this immense challenge. Feeling extra confident? Enter Non-Stop Play and rock out to successive tracks, making your own show setlist: potentially a true test of endurance and ability to execute multiple techniques.

Guitarcade is back and better than before, with mini-games ready to slyly and somewhat subliminally ingrain scales, fretwork and the like into your noggin. Ducks ReDux is our personal favourite, probably because it’s arguably the easiest, dealing with shifting, although Scale Warriors is up there for its Double Dragon inspired aesthetic and style. You will nary have as much fun learning the ins and outs of guitar. The more traditional Score Attack is lumped in here as well, which lets you play a song on either easy, medium or hard. You have three strikes; if you, on average, miss 3 phrases throughout the course of the chosen song, you fail it and must restart. 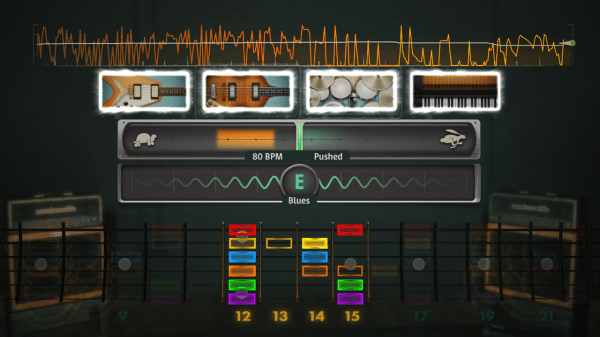 Sessions mode is an all-new inclusion which lets you jam with up to four A.I. band members. Choose their instruments, from basic drums to the wildly out-of-place kazoo (yes, you can rock out with just a kazoo to back you), the BPM, the scale (Pentatonic, Phrygian, etc.), the musical style and pace and then improvise to your heart’s content. Now, the chosen scale will be displayed (as seen above), and it is recommended that you play within that scale of notes in order to sound nice for the specifications you determined, but by no means are you restricted to them. The band will adapt to your playing – an awesome new method in discovering fresh sound combinations and a great arena to go wild and experiment within. Finally, and unfortunately, we could not test out multiplayer for this review; no rockstar friends with the right equipment (obviously didn’t buy Rocksmith then…those bastards!)

The big things that most who have played the first title will notice immediately – as alluded to in the Overview section – are the revamped menus and interface. Navigating the various menus is now simple and fast. The songs list can be sorted by title, year, length, difficulty and recommendation among other categories. Simplification is the focus here. Even in regards to the graphical representation of the tuner, ease-of-use and understanding overrides style – although Rocksmith 2014 Edition has plenty of the latter as well, with its quite sleek presentation. The Lessons videos are concise, with the demonstrated chords and such being distinctly marked, following the colour key introduced in the last game, but being supplemented by secondary elements (case in point: the numbered fingers shown below). 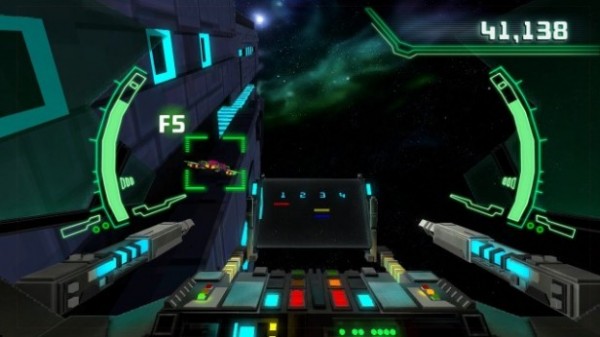 The note highway is slightly confusing at first solely due to its 3D, angled layout. Guitar Hero, for instance, had a more flat perspective for its note highway, which ensured no confusion as to when exactly the notes were gonna hit (that will be the only comparison to Guitar Hero in this review). But, you get used to it after a while. The varying playing techniques are better signified on the highway now, with unique, identifiable representations of slides, hammer-ons and bends, just to single out a few. The development team also did a great job in creating character and individuality for every Guitarcade side-game, through the visuals, without sacrificing a clear interpretation of the unique instructions for each.

The track-list features a good selection of 55 songs across all the different sub-genres of rock throughout the years, from classics such as Aerosmith’s ‘Walk This Way’, and Kiss’ ‘Rock And Roll All Nite‘ to the more recent ‘Now‘ by Paramore and ‘R U Mine?‘ by Arctic Monkeys. When starting each track, your guitar/bass tone will automatically be shifted to the signature tone used in the respective songs so as to closely replicate the original sound of the instrument used in its recording. Warnings of potential audio latency are clearly stated, with a provided guide to setting up your game and audio/visual arrangement. Generally, it’s recommended not to simply use your HDMI connection as both your video and audio source. 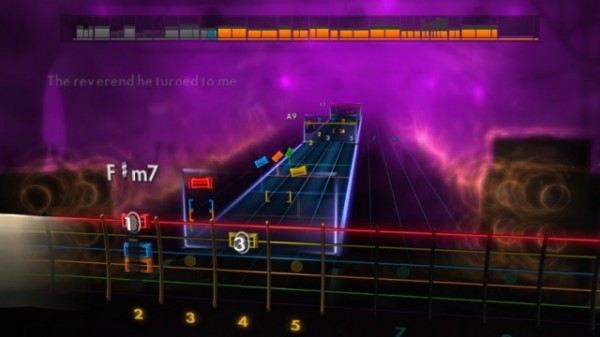 Once your instrument is plugged-in – and whilst in-game only – Rocksmith in conjunction with your rig essentially acts as an amplifier. So if you ever want to entertain a group of people, but don’t own an amp (for whatever reason, you amateur) Rocksmith can be your surrogate. Factor in the broad Tone Designer, allowing many custom tones that can easily be mapped to each 4-way directional flick of the right thumbstick, and you can create a plethora of different sounds. The sheer amount of pedals, loops, pre-effects, amplifiers and more that can be applied is impressive, with multiple effects available to be assigned in most steps. Considering this, Rocksmith enables a more diverse range of tones than any one amp could.

Rocksmith 2014 Edition‘s claim of being “the fastest way to learn guitar” is definitely a fair one in my opinion. It is easily the most fun, detailed, accommodating method to sharpen your axe-wielding talents. Whether you are starting with zero experience, at an immediate level or otherwise, Rocksmith 2014 Edition will teach you something valuable. In terms of accessibility, if you’re not willing to shell out for a guitar/bass that you don’t already own, then you were never truly interested, because regardless… you need a guitar… to learn guitar. Uncommon video lag (not audio latency) and sometimes hyper sensitivity to sound levels/fret-holds aside, Rocksmith 2014 Edition is a near perfect learning tool for any aspiring guitarist. 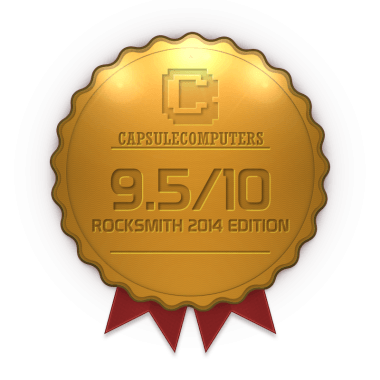