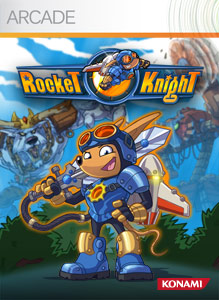 Story
“Sparkster makes his triumphant arrival on next-gen consoles with Rocket Knight, the newest entry in the beloved 2-D side-scrolling rocket action series. Our favorite opossum hero returns home after 15 years to find the kingdom of Zephyrus in shambles. Use your wits and Sparkster’s trusty rocket pack to dodge and defeat a menacing wolf army threatening the lives of the people.” [via Xbox.com]

The game starts out with Sparkster tending his farm, but when the wolf army attacks the kingdom of Zephyrus he grabs his trusty Rocket Knight armor and rushes off to save the kingdom. You take control of Sparkster as you go through the levels destroying the wolf army, fending off the Alex, and uncovering a secret enemy disguised as the new Zephyrus defenders.

Gameplay
Take the jetpack and the sword as your traverse 14 different levels. There are 3 types of levels that you will run into while playing. Platforming levels where you jump through the level killing bad guys. These levels play out just like a normal platforming games.  The second type of level are flying levels where the screen scrolls by itself and you have to avoid obstacles such as flying enemies, mines, and missiles. Flying levels only require one button press in order to shoot and holding in the button to charge up a powered shot. The final level type is boss stages which have the most spectacular scenes in the game, but the bosses work on a random pattern system. I say random because it isn’t a pattern exactly, but more of a set amount of attacks that each has a specific way to be avoided. The only problem lies in the fact that there isn’t a clear order in which each move will occur and the location the attack takes place at is based on your attacks against the boss.

Extra gameplay twists are added throughout the game, such as ice levels midway through the game. The cold level causes your jetpack to freeze and halt the usually recharging power bar. In order to refill it you must sit in front of torches to thaw it out. The icy levels also add frost around your screen which is a nice little graphical bonus.

The gameplay is straight forward with the only task being to survive till you get to the end of the level. Although it is straight forward, it doesn’t mean it is easy. On normal the game starts out really easy but the last four levels are brutal. On hard every level is pretty brutal and beating it without dying will test many players, but once you have the levels memorizes they too will be beatable.

Audio & Graphics
Rocket Knight is a 3d sidescroller. The only audio and graphics in the game that is memorable are during the boss battles. Throughout the rest of the game you have basic 3d esque elements in this sidescrolling platformer. There are a few annoyances within the game, such as enemies or platforms in the background that look like they can be attacked or stepped on. The graphics are nice but on occasion distracting. 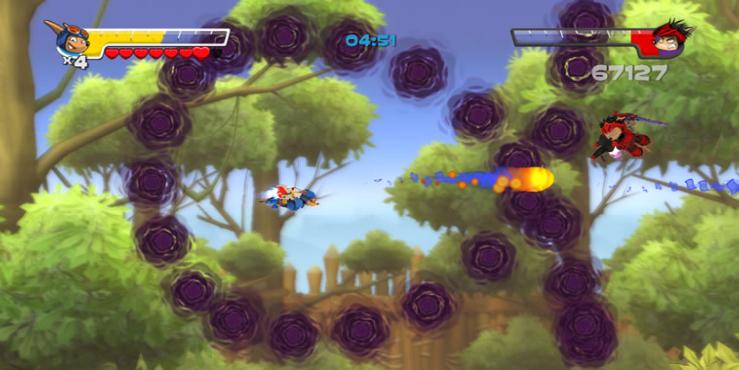 Achievements
The Achievements found in Rocket Knight consist of beating the game, quite a few times. You’ll need to beat the arcade mode on normal, on hard in a single playthrough, on hard in less than 60 minutes, complete arcade mode scoring 1,000,000 points or more and on gold Sparkster mode. That’s a minimum of 3 playthroughs only if you can beat hard in one playthrough and in less than 60 minutes at the same time, which is pretty hard to do. 1,000,000 points needs to be achieved during one of those playthroughs as well, but if you can manage to beat hard on one playthrough or even beat gold Sparkster mode you will most likely be achieving 1,000,000 points. There are also the miscellaneous achievements for doing certain tasks on certain levels, but you can just go back to those levels through the free play option, you can even complete all levels using free play so you don’t have to start over if you die to many times. Overall the achievements found in Rocket Knight are pretty hard.

Overview
This Rocket Knight reboot is a welcomed addition to the Sparkster series that fans crave. The game is short but with 3 different difficulty modes has some replay value. Overall the game is a welcoming experience to any fan. The game is small and can be beat in under an hour, there is fun within the game, even if it starts out pretty easy, the last 4 levels are brutal even on the normal difficulty.
I give Rocket Knight