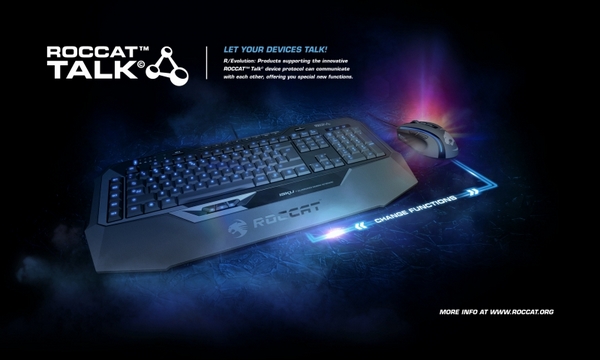 As a writer, a good keyboard is worth its weight in gold. We spend hours on these things, typing away as we practice our craft. As a PC gamer, a good keyboard is just as important. We also spend hours on these things, using fewer keys at much higher repetition. Thankfully, the latest technological space race in the PC Gaming peripheral market is the humble keyboard. There are plenty of options to choose from, a far cry from the old days of the beloved grey IBM keyboards.

Roccat’s new top of the line gaming keyboard is the Roccat Isku.  It is an illluminated rubber domed type keyboard with medium height keys, eight physical macro keys, a large wrist rest, and eight media keys. It features a powerful set of drivers and it is the first Roccat keyboard to support the Roccat Talk feature. Paired with a Roccat Kone[+], Kone Pure, or a Kone XTD, the two devices are able to work together to create macros that can perform functions on both devices at the same time. 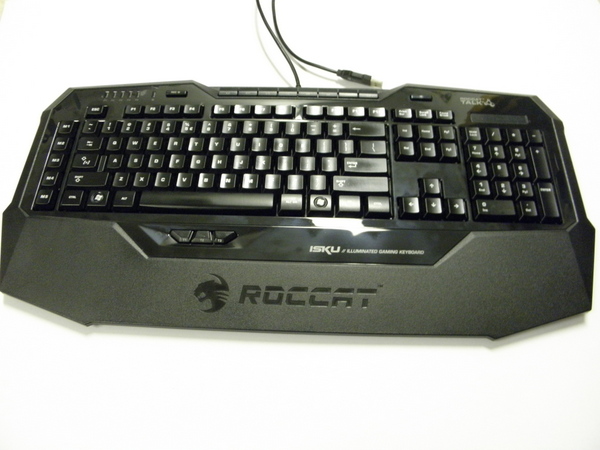 Physically, the Roccat Isku is a large keyboard. Although not nearly as large as the venerable monster sized original Logitech G15, the Isku takes up a lot of physical space with its large non-removable wrist rest. Those with small desk areas will need to measure their free space ensure there is enough room for both the keyboard and mouse. The angular looking keyboard itself is a mixture of glossy fingerprint absorbing black plastic with a textured wrist rest. The wrist rest is at a perfect angle for comfortable typing marathons. The bottom of the keyboard has channels in the plastic to assist in cable management and extremely grippy materials. Even with the keyboard feet popped out, I found the keyboard did not move a millimeter in regular usage.

Typing on the keyboard was an extremely enjoyable experience. Although I consider myself a fan of mechanical keyboards, I found transitioning from the extremely low actuation forces of Cherry MX Blue switches to the Isku to be rather pleasant. The force needed to depress the keys are slightly higher than the Cherry MX Blue mechanical switch, but are still within a comfortable range to allow for fast and comfortable typing for extended periods of time. The keys feel extremely sturdy and do not have the loose feeling of cheaper keyboards. I personally did not find a major difference typing with the medium key height and a regular key height. However the shorter height provides a smoother aesthetic look and may be more familiar for those who mainly work on laptop keyboards. 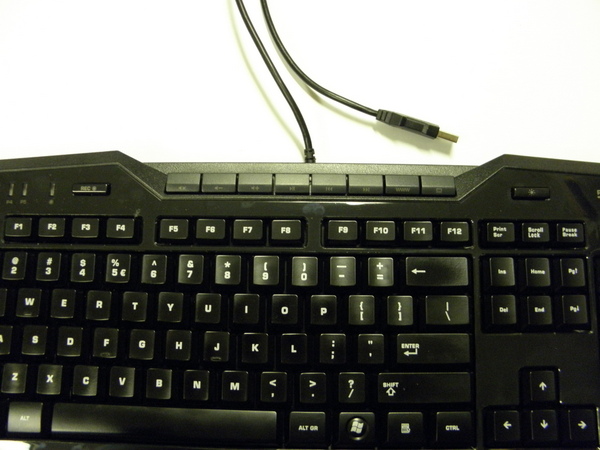 A small touch that I really appreciated was the home key ridges. Traditionally ridges are placed at the F and J keys to help touch typists find their home keys. On the Isku, an additional ridge is located on the W key. I have extremely small hands so reorienting my keyboard hand after physically moving my hand to reach the 6 key is always a difficult problem when playing RPG games like Torchlight or World of Warcraft. This extra ridge on the W key made it extremely easy to find my way back to gaming home keys without having to quickly glance down on the keyboard.

The keyboard lighting is lighter blue, probably closer to a dark powder blue than the more traditional royal blue lighting. There is a physical button that allows users to cycle through five different brightness settings, but the driver software provides a slider to set the keyboard from 0-100% brightness. Additionally, the level of lighting after a set period of idle time can be set to save power or lower the amount of light in a room if you sleep in the same room as the keyboard. I found the brightness levels to be bright enough to be obvious without ever getting bright enough to be distracting. I really appreciated the ability to turn off the keyboard when the computer is left idle. 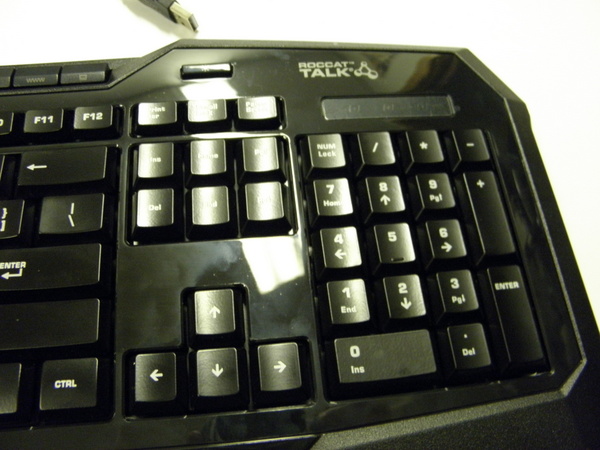 There are five keyboard style macro keys on the far left of the keyboard and three mouse style keys right underneath the space bar. Additionally, the Caps Lock key has been completely removed in favour of an Easy Shift key. Yes, let me repeat this brilliant miracle that should have been done years ago. The caps lock is removed from the keyboard. Let that sink in for a moment. No more accidently doing the internet equivalent of standing up in the middle of a coffee shop and SCREAMING TO THE WHOLE WORLD WHAT YOU HAVE TO SAY followed by a sheepish apology for accidently depressing the caps lock key. I absolutely love this. I cannot figure out why on earth manufacturers have not removed the Caps Lock keys from keyboards sooner. For those who still feel the strange need to have a caps lock key, one can be easily macroed to one of the many macro keys on the keyboard. 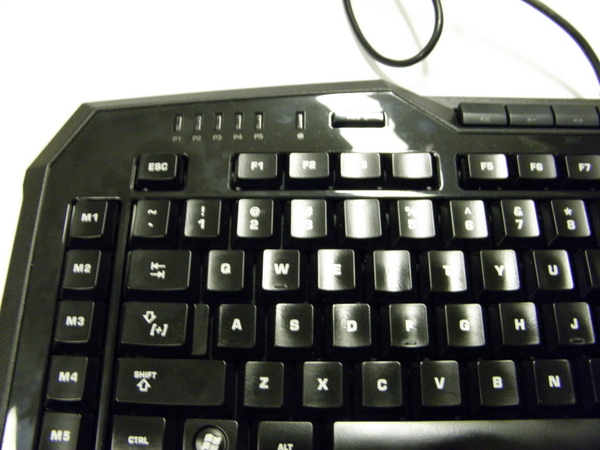 The Easy Shift key effectively doubles the possible amount of macros available then turns every letter and number key on the left hand side of the keyboard into a macro button. This provides a grand total of 36 macros all easily in reach of the left hand. Additionally, the 8 media keys and all twelve function keys can be bound to more macros. The amount of options on macro key placements the Easy Shift key brings is a God send for button intensive games such as World of Warcraft PvP. I found with most traditional macro keyboards, the more macro buttons added, the further distance my small hands has to travel to hit said macro key and the longer it took me to reorient myself. By being being able to macro all the keys around my WASD key, I found myself suddenly able to react quicker and recover faster from drifting from my default hand position. Unfortunately, those who favour the directional arrow keys are out of luck as the rest of the keyboard keys are not programmable.

The keyboard supports five different profiles loaded up at the same time and can record macros on the fly with an easy macro record button. The keyboard is also paired with the excellent Roccat drivers. For those who are using a Roccat Talk supported Kone mouse, an extra Roccat Talk driver will need to be downloaded to allow the mouse and keyboard to interact. Having both devices allows the Kone’s Easy Shift button modify macros on the Isku and vice versa. As an added bonus, the Isku can macro keys to temporarily lower then sensitivity of the mouse to make finer adjustments while sniping long distances. Although it was a little strange to me that only the keyboard could bind such a key, the ability to do so was a pleasant bonus. 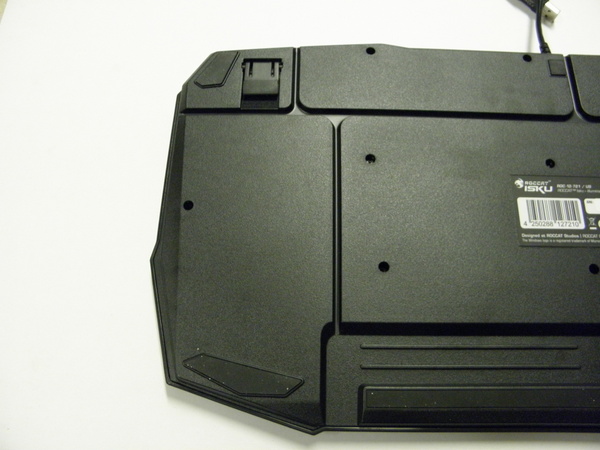 The driver software is a little intimidating at first glance. The amount of things that can be adjusted, tweaked, and fiddled with is absolutely impressive. Once I got over the initial intimidation, I found a powerful macro editor that allowed for automatic profile switching based on .exe’s being launched. Macros can be finely tuned in a regular recording mode that can be triggered with a keyboard press or through the drivers. The advanced macro editing provides a macro editing UI that will be immediately familiar to anyone who has used an audio editing or creation program or a video editor. Within the drivers, it is possible to disable the right and left Windows key, the application key, the tab key, and the left shift keys. This is set to a per profile basis. Finally, sound feedback can be enabled on the drivers. The Roccat voice heard in all their advertising can declare which profile number is selected on profile changes, announce the beginning of an on the fly macro recording, and call out countdown timers. Although this can be a little gimmicky at times, I appreciated having the audio cue as an assurance that my game specific macros were loaded correctly. I have been floored by the quality of Roccat’s drivers for the Isku. It is hands down possibly the best driver software I have experienced to date. 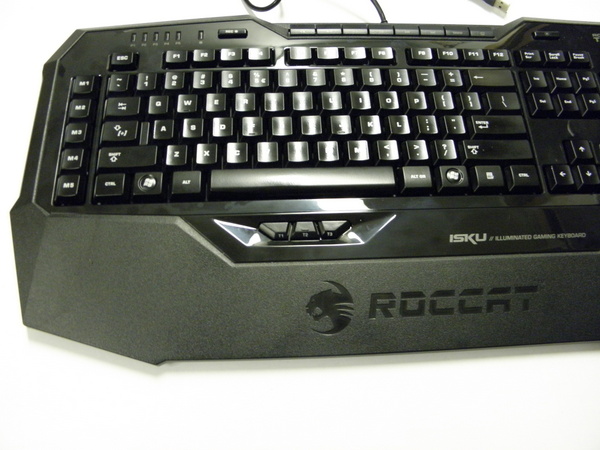 My only disappointment with the Roccat Isku is that it is not a mechanical keyboard. Although the Isku is priced competitively to similar keyboards both mechanical and domed, I believe there is a large growing market for mechanical keyboards. The Isku’s features would lend itself well as a mechanical keyboard, even at the cost of a higher retail price for a mechanical Isku. Roccat has created a sturdy keyboard that is visually appealing, solidly built, pleasant to type on, has enough macros to appease the biggest addict, and a killer driver set that has set the bar where other driver software should be compared against.