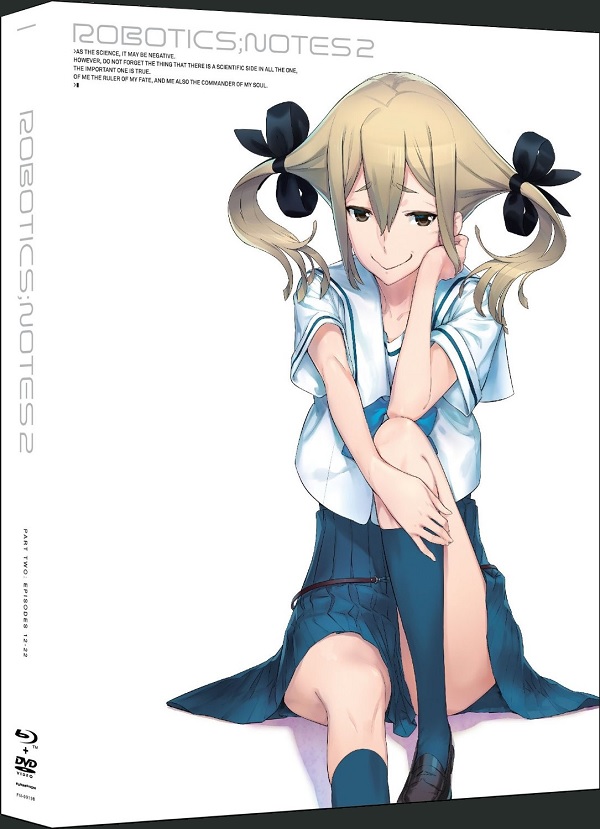 Overview
Most series manage to balance two themes at the same time and many are capable of many running themes, but then there are also series that fall flat by trying to do too much with too little time. At the end of Robotics;Notes Part One viewers had just witnessed a chilling revelation that tied a few points together but left many questions up in the air. The question is, does Robotics;Notes Part Two manage to bring everything to a satisfying conclusion?

Story
Now before we go any further, it is worth noting that readers who have not seen the first half of the series will be subject to some spoilers below. Anyways, Robotics;Notes Part Two picks up shortly after the unfinished last episode of Gunvarrel was leaked online and Kaito was warned not to investigate Ko Kimijiima any further.

Despite these warnings, Kaito continues to investigate the Kimijima Reports, spurred on by the fact that the apocalyptic details described in these reports matches the storyboard for the leaked Gunvarrel episode. While he does this the rest of the Robot Research Club continues to work on building Gunbuild-2 with the help of JAXA and a couple of new willing participants. 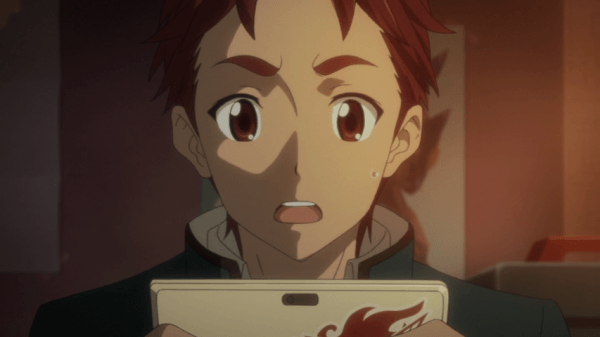 While the club comes across various issues while working together and building the robot, Kaito and Frau continue to learn more about the Kimijima Reports and the leaked episode of Gunvarrel. As these two continue to dig deeper, more information is revealed including the fact that Frau’s mother became aware of the Committee of 300’s usage of the Gunvarrel anime to brainwash the public and because of this, she had to take drastic measures.

Although these two seem to be getting closer to the truth, solar flares have begun causing massive panics throughout Japan and the rest of the world. Robots have begun attacking humans in Tokyo and more instances of people being brainwashed come to light. With solar flares becoming more prevalent and every piece of information pointing towards the end of the world as they know it, Kaito and the rest of the club must try to find out the real truth before the committee’s dark machinations reach their final stages. 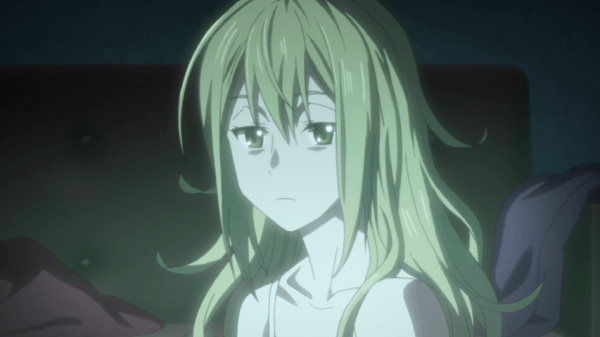 Now at the beginning of this I mentioned that there are some series that can balance two different themes at once and there are those that cannot. Well, while Robotics;Notes manages to do an okay job with this, it often makes the series feel like it is hitting roadblocks in its latter half by spending too much time on club antics when something clearly serious is happening, leaving viewers wondering exactly what a character is thinking when they just have learned a major secret only to go back to putzing around.

The character developments made throughout the first half do pay off in the second half, with the neglected Junna given first priority. Most of these pay offs work well since the majority of them are interwoven with the main storyline, such as Frau’s and Akiho’s storylines and even a believable love story worked in to compliment everything. There is also one scene, I won’t say which one, that viewers will feel haunted by for quite some time after it happens. 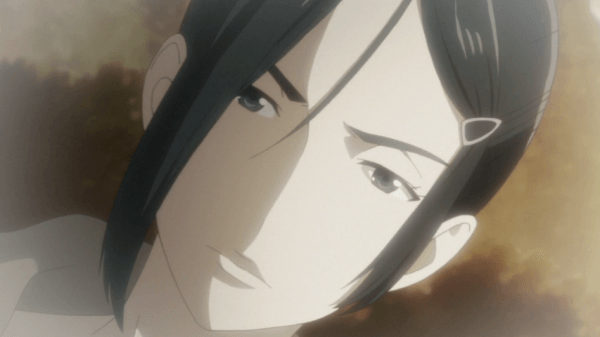 In the end Robotics;Notes Part Two manages to tie everything up with a rather satisfactory ending. Along the way viewers will probably take issue with way that the story is treated at times, but near the end of this release numerous pieces of the puzzle begin to fall into place and one major plot twist later the series races towards its finale, that, while a bit cheesy at times, is definitely worth watching.

Visuals
Similar to the first half of the series the basic animation style in Robotics;Notes continues to be impressive throughout the second half. The characters are all nicely designed with a fair amount of detail provided to each, though there are a handful of drops in quality during group scenes which is a shame as this did not occur in the first release. 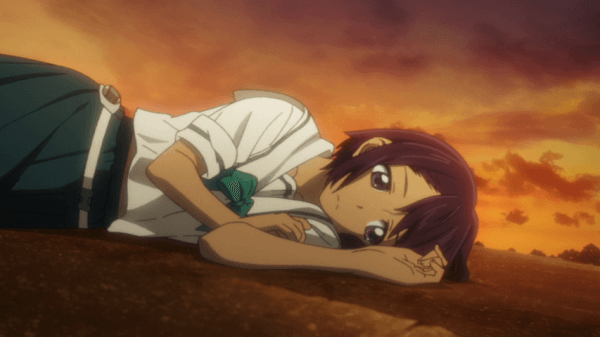 Now considering things take a turn for the worst in the second half of the series, there are a number of moments where robots run rampant or advanced pieces of technology are used and the designs of these pieces of equipment and the monoples are handled nicely.

Audio
As with Part One, Robotics;Notes Part Two has been released with an English and Japanese voice track. Now while I found that only Frau’s voice actress was the only standout performance in the first half of the series, I must say that a few of the more dramatic and emotional scenes in Part Two brought out the best in these voice actors, as the dub seemed to improve quite a bit in this second half, though a few of the main side-characters still felt sub-par. 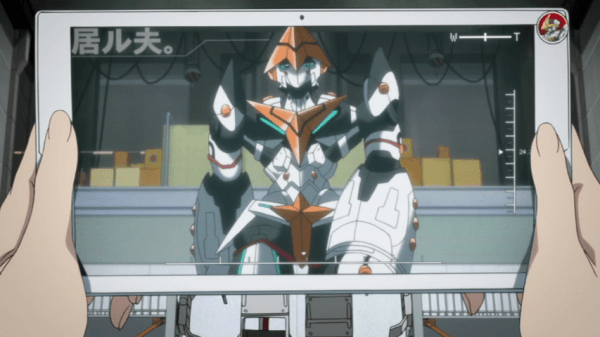 The series’ background music continues to remain basic and forgettable throughout this second half, though the whole Kagome, Kagome theme is definitely chilling to hear. As for the opening theme, we have “Houkou no Meshia” by HARUKI and the ending theme “Topology” by Kanako Ito.

Extras
The extra features for Robotics;Notes Part Two are very similar to those found in Part One, with there being a clean version of the opening song and closing song, the US trailer for the anime, trailers for other FUNimation anime, two commentary tracks and a video interview. 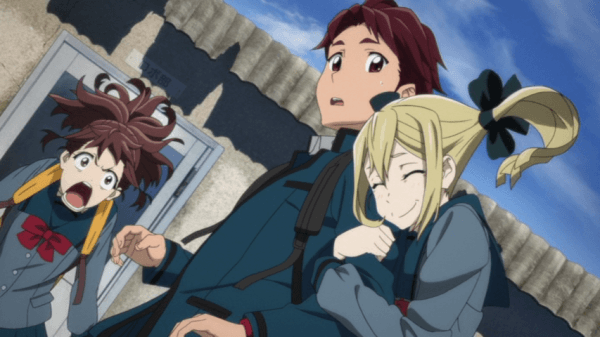 The video interview is “Science Adventure Series Interview Part 2” and continues on the interview found in the first release while the commentary tracks are for episode 15 featuring Apphia Yu, the voice of Airi/Gezi and Clifford Chapin who voices Kaito and episode 22’s commentary features Joel McDonald, the director and Eric Vale who voices Ko Kimijima.

Overall
Robotics;Notes Part Two manages to successfully continue the story that viewers were left with in Part One and although it does lose its focus a bit too often, viewers will be in for quite a ride once the plot begins to advance at a rapid pace that manages to tie everything together in a satisfying end that results in an enjoyable payoff for those who decide to stick it out till end.