Any game whose title has numbers replacing letters and even syllables tends to ring warning bells in the ears of most gamers. The fact that Speedbump Studios is in fact just one guy, by the name of G. Norman Lippet, can also lead to disaster. In this particular case, though, there’s plenty of awesome to go around.

You’re “Number 8”, some sort of captive who has been trapped in a space station with a load of angry robots, left to fight for the viewing pleasure of the fighting fans around the galaxy. A mysterious figure watches from a window – your “owner” so-to-speak – and when you start to rebel against his control, he doesn’t take kindly to it. Okay, so the the story isn’t all that compelling, but it gives a nice, simple platform to carry you along the game itself. 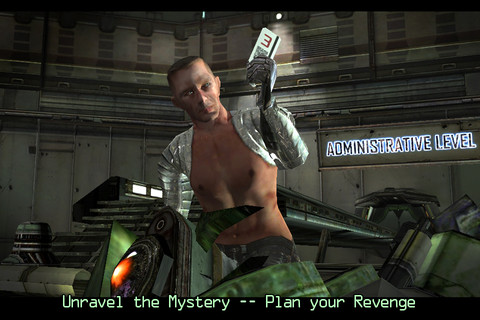 The story develops as brief cutscenes when you reach certain key areas, and fully voice-acted on the part of the mysterious bad-guy, but with no subtitle options available as far as I can see. The writing of some of these snippets of dialogue is a little hit-and-miss, but the voice-acting itself is really well done.

The gameplay is along the same lines as Infinity Blade; a slash-em-up against a variety of opponents, in this case, big-ass robots. But Speedbump has introduced a little more complexity to the genre.

Instead of the usual mad chaotic pawing a the screen, peppering in dodge and special moves from time to time, this game has you counter the robot’s moves until he craps out for a minute, allowing you to wail on him to deal a big chunk of damage. For the first couple of fights, on-screen instructions are displayed, letting you get the hang of what counters what, after-which you are given the option of turning off these hints if you’d like a bit more of a challenge. 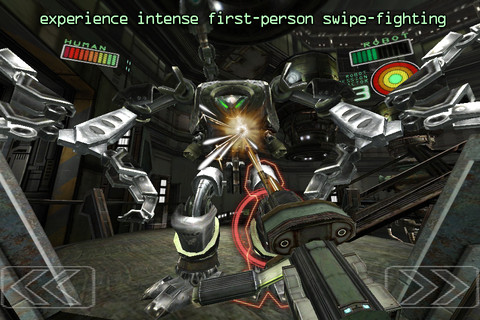 After each fight, you’re shown some stats about how you did, as well as the “Viewer Rating”, which climbs as you progress, and falls when you die.

In between fights, you can free-roam around the environment, with the classic stick on the left for movement, and swiping to move the camera. The camera movement, however, is very slow, leaving you to swipe 5 or 6 times to turn a 180. There is an element of inertia to moving the camera which can make it a little easier to move, but all-in-all, it’s pretty painful to look around. There are also issues with invisible walls, leaving you to get stuck on a tiny ledge you can’t see, or, on the rare occasion, getting stuck in a wall. The virtual stick does move to wherever your finger starts, making it that little bit easier to use, but if it gets too near the edge of the screen, you’ll end up not being able to move in that direction. 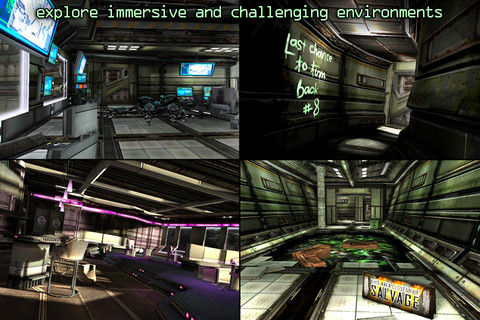 All this adds up to making the free-roaming slow and frustrating. And while it is needed to pick up health and weapons along the way, as well as giving a sense that you are rebelling against your would-be controller, you’ll soon find yourself frustrated by the lack of control you have over your movements.

A little way through the game, you’ll be “given” the power to push certain boxes out of the way, by tapping on them. This feature is even utilized in some puzzles down the line, but again, the lack of control, plus a few bugs, make completing these puzzles a very perplexing experience.

The visuals of this game are very impressive, especially for a one-man studio. Now I know that a lot of this is down to the Unreal engine, but the actual art, models, and animation of the game, for the most part, are really well done. And some innovative HUD design and camera movement really makes the fights come alive. 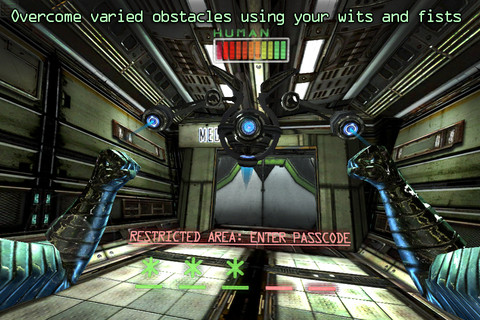 The sound effects are spot on, and the music, too, is industrial and dark, giving a certain presence to the whole experience. And as I mentioned above, the voice-acting is just as well done, which in my opinion is the most impressive and most often messed-up parts of an indie-developed game.

Setting aside the minor bugs and design issues, this is a very well put together game; especially considering it’s from a small, indie game studio. It’s just unfortunate that some of those bugs leave the player bashing their head against a brick wall, as, if it wasn’t for those problems, this would be a great little title to pass an hour or so.

That said, I can’t wait for Speedbump Studios’ next release, when they’ve polished their skills and learned from their first foray into the games industry. I am truly looking forward what they make next!