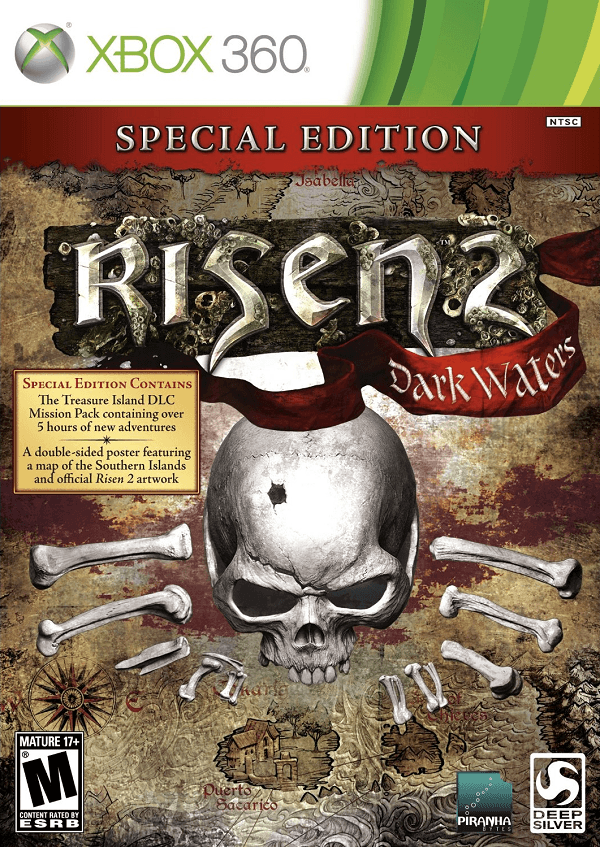 Overview:
Over the last few years, zombie games have become nearly a genre of their own and the popularity of such titles has skyrocketed, with nearly everyone trying to cash in on the zombie name. However there is one group of characters which, while shown off often on the silver screen or in literature, has seen barely any love from the video game community.

I’m speaking of course about pirates. Now we aren’t talking about your modern day pirates which do all of their illicit activities behind a keyboard, but the ones that used to sail the high seas stealing from cargo ships, drinking rum and looking for treasure. Well it seems Piranha Bytes and Deep Silver haven’t forgotten about these classic pirates, because they have created an RPG full of various pirates and oceanic lore in the form of Risen 2: Dark Waters. Does this RPG turn out to be one to remember or should it be sent to Davy Jones’ locker?

Story:
As many will note, Risen 2 is in fact a sequel to the original Risen title released back in 2009. Players will indeed be stepping back into the boots of the Nameless Hero from the first game, although exact knowledge about the first game’s storyline is not required to enjoy Risen 2. There are a few snippets of the game that will mention events from Risen 1 and those who have played both titles will obviously be able to get the most enjoyment out of these segments, although newcomers will not feel ostracized. 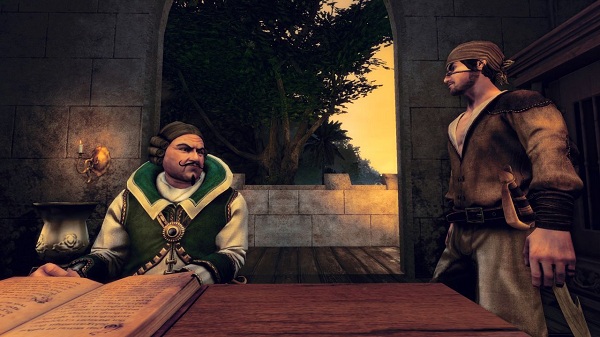 After the events of the first game, the Nameless Hero has settled into a roll in the Inquisition as an officer. Unfortunately in the time that has passed since the previous game he has become quite the drunk, spending most of his time staring at the bottom of a bottle than trying to prevent the Titans from rampaging around the Old World.

With these Titans running rampant and destroying everything in their path, the Inquisition has fallen on hard times and one of their last bastions of hope is facing destruction if they are unable to make their way over the ocean to the New World. There is one small problem however, the Titan Lord Mara who lives in the ocean has sent a sea monster in the form of a Kraken to destroy any and all ships it comes across.

One fateful night the Kraken destroys a pirate ship attempting to find safe harbor at the Inquisition’s base. In an attempt to rescue survivors, the Nameless Hero stumbles upon an old friend named Patty. Patty is the daughter of a famous pirate who just happens to hold the key to putting an end to Mara and the rest of the Titans. Learning of this possibility, the Inquisition commander sets the Nameless Hero on a mission to infiltrate the pirates and try to find these artifact weapons so that they can put an end to this threat once and for all. 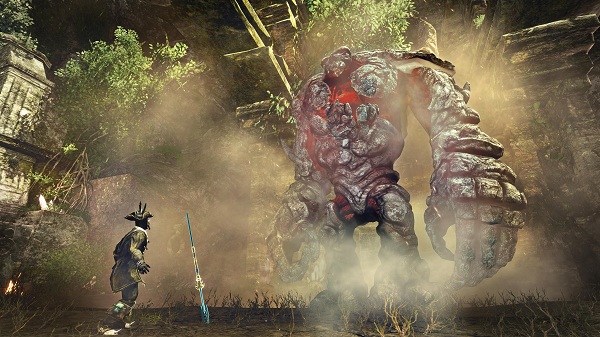 To do this, players will be spending much of their time traveling between the various islands that make up the Old World. On these islands players will encounter a large number of pirates and other characters which they will have to work alongside in an effort to track down the artifacts required to defeat these Titans. Players can choose to focus on the main storyline itself, though they can also follow some small side-quests, though it is worth noting that most of these side-quests only last for a single mission with barely any branching storylines that cover multiple missions.

Some of the people the player comes across in their ventures will be able to join the player’s crew, allowing the player to take one of them with as a follower to assist in combat. Unfortunately most of these characters are rather one-note and see barely any development. This is also rather true with the main character as well, though his sarcastic tone and likable personality make him an enjoyable character to play as. 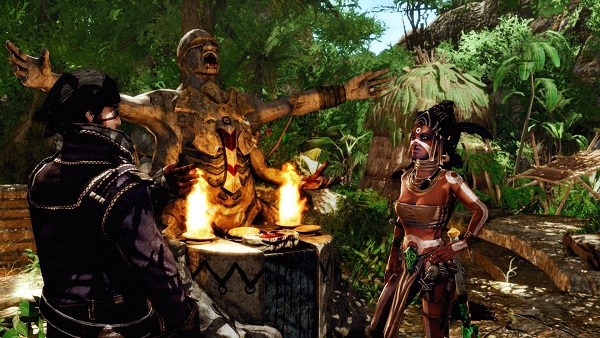 That being said, the story as a whole is rather interesting and full of little twists that will keep the player entertained. This becomes especially true a few hours in, where the title opens up for further exploration. It also helps that with the pirate mythology barely explored by video games, there are plenty of moments which will catch players off guard simply due to the unfamiliarity of the material. This unfamiliar source material will help keep the game not only fresh but also help keep the player eager to continue the main storyline.

Visuals:
Nearly all of the islands that the player explores are full of lush jungles with themed additions, such as deserted ruins of the natives, small established villages, pirate hide-outs, caves and more. These islands are rather detailed, especially where vegetation is concerned. Unfortunately most of these islands are rather small and constricted, with players able to venture through them rather quickly.

These environments do feature a dynamic day and night cycle with various weather patterns to keep things fresh. The main character himself is designed well and so are most of the players’ companions and storyline characters. As for the equipment and the outfits that the characters wear in the game, they are designed well and seem to match the time-period and pirate theme perfectly. 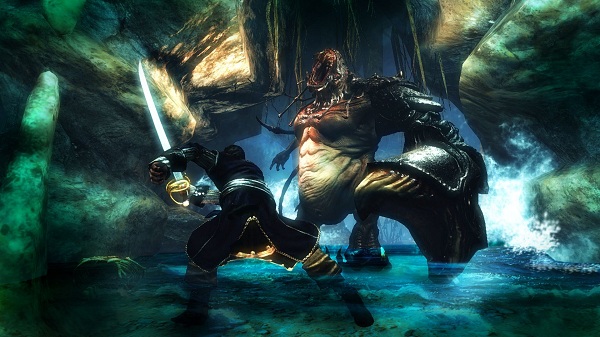 Unfortunately that is where the impressive visuals end. In fact the rest of the title begins to feel like something released earlier in the Xbox 360’s lifecycle. There is an alarming amount of texture pop in Risen 2, with environments often not loading until the player grows closer to them and even a few occasions where textures simply never loaded. This issue is compounded with the fact that most of the gameplay animations, such as most combat animations, are clunky at best, leaving an impression of a game released many years ago and not one released in 2012.

Audio:
It is difficult to determine whether or not the voice actors who were hired to perform the voice work for Risen 2 were either told to simply do a poor job voicing characters due to the fact they were pirates, or if they simply hired poor voice actors in the first place. While some of the main characters are voiced adequately enough, most NPCs sound absolutely terrible with rushed and uninteresting voicework.

Thankfully the atmosphere of the game is superb, with plenty of jungle sounds occurring around the player as they venture through an area or the crack of thunder during a storm. The soundtrack itself is also admirably put together with background music suitable for the setting and the mood.

Gameplay:
Risen 2 is an adventure RPG at heart with the player following the main questline with only sidequests and exploration as a diversion. Now anything that the player does in the game will actually reward the player with Glory Points (Experience Points). These points can be accrued by beating other humans in duals, killing monsters and wildlife, finishing quests, pickpocketing and more. These glory points can then be used to level up a number of the Nameless Hero’s skills. 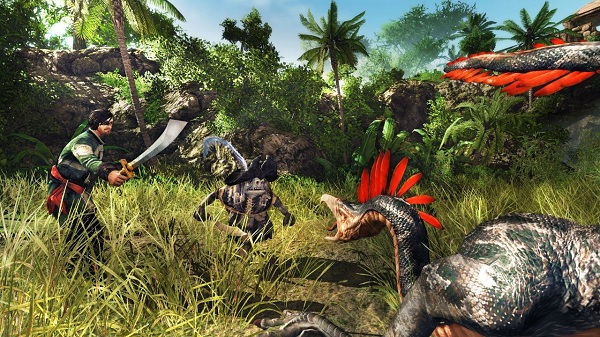 These skills range from better blade use, better usage of firearms, toughness, cunning and voodoo. Each level of these skills will require more glory points than the last, so while it is entirely possible to level up nearly every skill the player has, it is time consuming. Each of these skills have various side-skills that can be enhanced or learned from skill trainers in the game. Unfortunately most of these skill trainers do require a large amount of gold making it difficult to train at the beginning of the game.

Unfortunately these skills tend to be a bit imbalanced with their uses, as players will likely need to make use of Cunning and Blades more than anything else in the game, with Voodoo only useful for a few things despite how enjoyable it is. As it stands however, cunning allows players to pick locks, pickpocket items and also convince NPCs with their silver tongue. This makes the focus on this skill pretty much a priority.

This also is true where Risen 2’s combat is concerned. Nearly all combat relies upon the use of blades and guns. Unfortunately this system tends to feel quite a bit broken at times, with combat mechanics as clunky as some of Risen 2’s aforementioned animations. The first issue is the fact that the title suffers from command lag that often forces the player to try and think one step-ahead of the game’s lacking combat system. 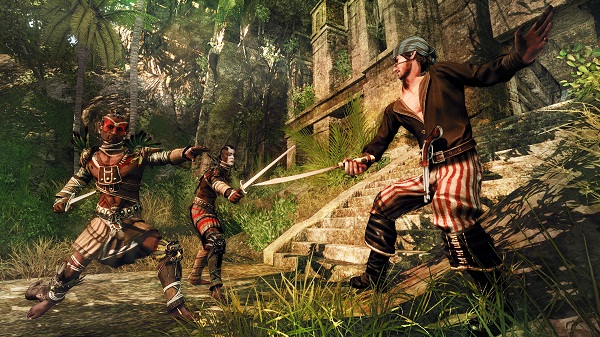 Fighting in Risen 2 ultimately devolves into simply pushing X to attack while holding the LT to block enemy attacks. It is worth noting that any advanced skills, such as parrying or counter attacking have to be learned from skill trainers that cost money. This is made worse by the fact that a number of enemies the player encounters seem to be capable of blocking nearly every attack thrown except for those done during their attack animations. This problem is made even worse by the fact that wild animal attacks and attacks from various undead creatures are completely unblockable, making fighting against these creatures difficult and cheap. It is worth noting though that Risen 2 is far from a difficult title, with abundant healing items and firearms to help pave your way.

The aforementioned firearms are quite useful, as bullets cannot be blocked by the enemy (though you can miss your shot) and do a hefty amount of damage. So players may often find themselves setting up the hotkey wheel in a way that allows for easy switching between a musket and a sword, for long-range attacks leading into melee fights. This does help alleviate some of the poor design decisions with the game’s combat, but not enough to make it enjoyable. 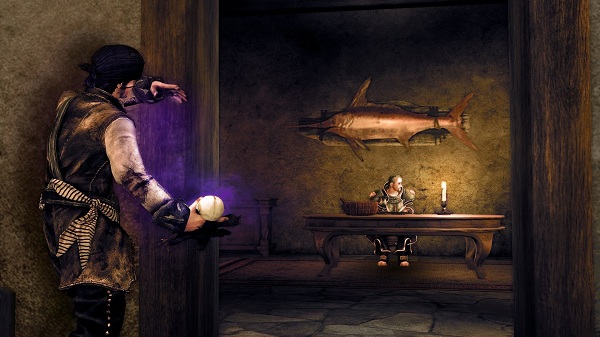 Despite the game’s focus on pirates and various islands, it is worth noting that players will actually never set sail on the open seas themselves, with boats simply being a method to fast travel between islands. It is worth noting that the game also features fast travel while on any given island, though players will need to first discover a specific location and own a map of said island. This allows the player to avoid needless backtracking and a chance to finish various side-missions at a faster pace.

Overall:
Risen 2: Dark Waters offers players a chance to step into the briny boots of a pirate (or in this case spy pirate?) once again and with it players will find a refreshing story and a lengthy amount of gameplay. Unfortunately, said gameplay isn’t without its faults as combat is hard to control and often frustratingly annoying, while the title’s visuals range from impressive to things that gamers would have expected six years ago. As it stands however, Risen 2’s few issues don’t weigh it down too much so that it sinks into obscurity, but they certainly will weigh on your enjoyment of this fresh pirate-themed adventure.