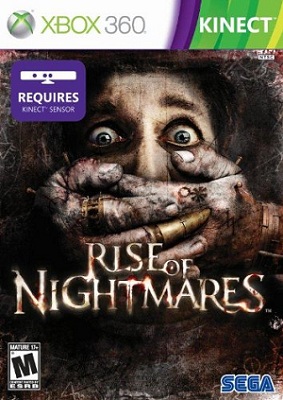 Overview:
Ever since the Kinect was released almost a year ago, gamers have been wondering when a more mature game would be released for the peripheral. Sure there was Dance Central but that simply involved dancing, and nearly everything else has simply been titles aimed at children or simple mini-game collections of little to no value.

That is of course until Sega announced that they were developing a mature horror title for the Kinect. Developed internally by Sega AM1 Team, Rise of Nightmares is a mature title in a world of, at the worst, E10+. With nearly full body motion control, including the ability to walk and turn on your own, is Rise of Nightmares every Kinect owner’s dream?

Story:
You wake up in a cold dark cell in the middle of a dungeon. A young woman is standing by you and you know that you have to escape from this jail cell. Apparently you are both the survivors of a train derailment, and considering that neither of you have seen another living soul, you must be the only survivors.

After escaping from the jail cell, the young couple is accosted by strange and horrible automated zombie like creatures. Defeating these, the couple begins to leave the dungeon, but that is when the walls literally begin to close in. As you try to do anything to save yourself, the walls slowly crush the couple to death.

While that may sound like a game over, that is actually the prologue of the game which also serves as a bit of a tutorial. The actual story involves the players playing as a man named Josh a bit of a drunk that is on vacation with his wife named Kate in Romania. The couple is riding on a train and, after a short fight about his drinking; Kate leaves their compartment to clear her head. 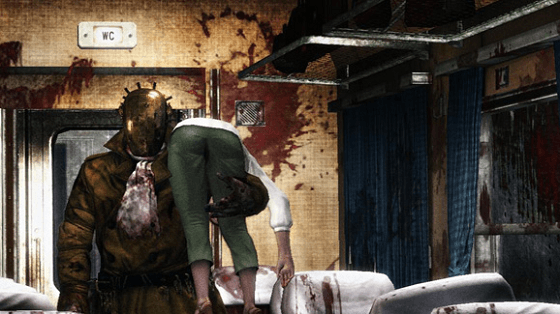 While things may seem simple at first, this quickly changes as a giant creature with a metal mask over its face tears apart a whole train car full of people and detaches the rest of the train cars from the engine, all in the process of kidnapping your wife. The detached cars derail, leaving Josh and the rest of the survivors in a creepy forest with only a large mansion in the distance. Josh has only one thing on his mind, rescuing Kate at all costs, even if it means facing off against the twisted creatures created by a mad scientist.

Rise of Nightmares’ storyline may be a bit generic at first, what with a creature kidnapping a loved one and running to a spooky mansion and all. But there are moments of levity as well. There are a few moments where you will be left speechless by the way things unfold, usually because they are either funny or entirely expected. Unfortunately, while there is some comedy here and a bit of a creepy atmosphere the story isn’t very scary and only expands past the initial plot point near the end of the game.

Graphics:
Rise of Nightmares is a decent looking title, environments are spooky and designed very well. There are plenty of things to interact with and when you have to sift through a pile of skulls to find a key, you’ll be enjoying the way that they move around your virtual arms. The characters are a bit basic looking in appearance, but don’t suffer any real graphical problems. 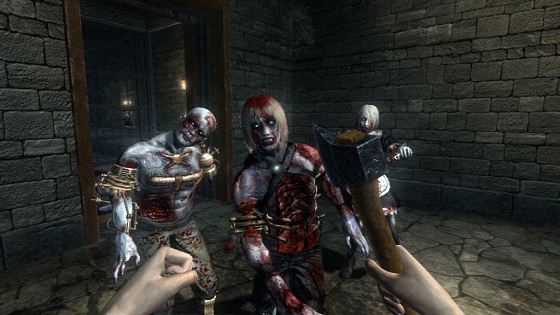 There is also a very large variety of enemies that you will come across. However there are times that, despite the amount of creatures, you will be facing off against the same looking ones time after time. The enemies also dismember well to the extensive and unique collection of weapons you can use against them, which will provide a nice visceral experience. While there are things to interact with, there isn’t a whole lot of detail to the world and most of the environments consist of gray corridors or brown outside.

Audio:
The background music is perfect for a horror story and suits the game nicely. Unfortunately the voice acting can be a bit tacky and sounds like something you would find in a B-Horror flick rather than a full-fledged game. Despite this most players will not find anything to their annoyance, but nothing excels in the sound department except perhaps the tinny growls and screams of the female creatures.

Gameplay:
At its core, Rise of Nightmares is a title that makes complete use of the Kinect. Players must navigate through various hallways and paths, avoiding traps and fighting the undead along the way. The way that players will do this is entirely through body motions and swinging their arms. Rise of Nightmares’ controls in a very unique and interesting way.

To move forward, players must put one of their foot forward. The further they move their foot forward the faster the character will walk, though the fastest pace seems to be a brisk walking pace. To move backwards, simply put one foot behind the other. To turn around and navigate you will have to turn your shoulders whichever direction you want to turn, which creates the first fully navigable Kinect game on the market. 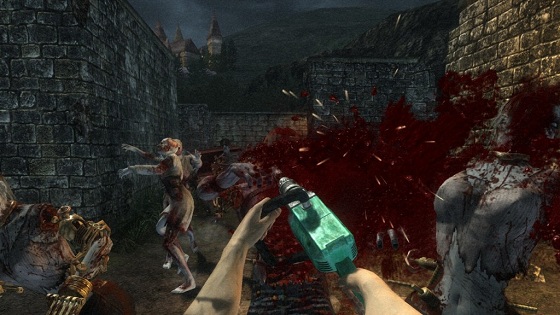 Of course, this is the Kinect and not everything is flawless. There are many times that I found myself simply walking into a wall because the game wouldn’t register my turning or would continue to walk despite moving my foot back to a normal standing position. This is remedied slightly by an “Auto” feature that players can activate by holding their right arm in an L shape to auto walk on the path they are supposed to take.

While this Auto Walk is a neat feature that removes a bit of the trouble of navigating as well as guiding you on the proper path in case you get lost, it also removes any side exploration that is possible. You can stop auto mode by any time by lowering your hand and it is extremely recommended as the Auto feature will have the player walking past all side routes, collectibles and even weapons. Plus there are certain parts of the game where Auto mode is disabled, usually places involving traps that can kill you. So mastery of the walking mechanics is necessary and not very difficult to master other than a few problems here and there.

There is more to walking around the environment however, there are also Kinect quick time events which will have the player performing a certain task to either advance or avoid death. This includes having to swim through a river, climb a ladder, and much more. There is even a certain enemy which will require you to cover your ears which provides an amazing sense of immersion. These quick time events are all picked up great by the Kinect and most of them are quite similar to their real life counterparts, making the quick time events a highlight of game interaction.

Walking around a creepy mansion and flipping strange switches on and off is going to attract some attention of those inside. Only problem is that the occupants of the mansion are all undead and out to make you become even deader than they are. To avoid this you must fight for your life using a relatively well designed combat system. 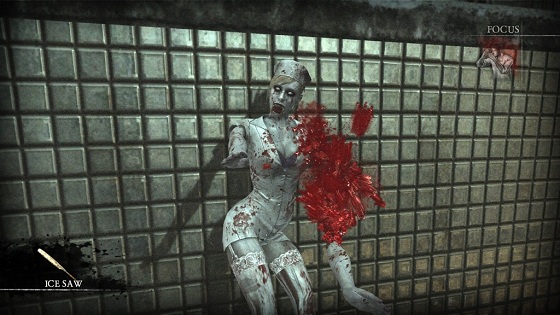 Players must raise their hands into a boxing stance, or at least up in front of their chests to focus on the nearest enemy. This is the game’s automatic lock on system which is very useful as it also transfers your focus directly to the next enemy as soon as one is defeated. To fight against the creatures you will have to punch, chop and bludgeon your way through them via any of the weapons you pick up on your path to find Kate. Though you can only take so much damage, which means you will have to block their attacks by crossing your arms into an X shape to help survive and recover lost health.

Players can only hold one weapon at a time and they do degrade over use, which means that your favorite golden knuckles will bust eventually. There are over forty different weapons that you can find in your venture through the mansion, including and not limited to, hatchets, brass knuckles, power drills, chainsaws, exploding glass vials, monster arms, hedge clippers, a vase and pretty much everything else you can imagine. Most chopping and bludgeoning weapons can be used by swinging your arm back and forth like you would if you were wielding a weapon such as that, while using knuckle type weapons will require the player to punch towards the screen. Each type of weapon has a different motion to use which will help mix things up.

Overall:
Rise of Nightmares is an innovative experience that makes use of the Kinect’s motion tracking ability in a way never seen before. The title may offer only a limited amount of exploration and is mostly linear, there is plenty of fun to be had while navigating the rather samy looking corridors. Combat is visceral, immersive and above all fun to play. While the storyline and acting may be something you’d find in a B-Horror, the experience you’ll leave with is one that shows exactly what the Kinect can be capable of.

I give Rise of Nightmares