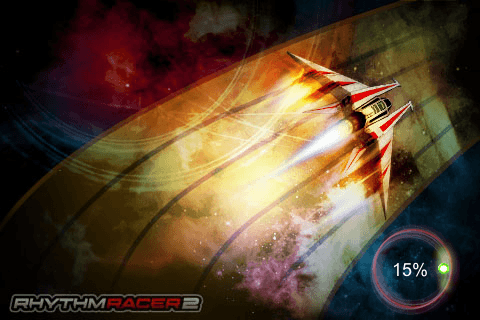 Overview:
Music games have become quite popular over the last few years since Rock Band and Guitar Hero came out. Now though we have iPhones and iPods out, with full app capability. Rhythm Racer 2 is now taking a stand to establish their motion controlled music game and it turns out to be quite a fun ride.

Graphics:
Each track has a unique path, though the road looks the same regardless of what song is playing. However as you advance difficulty the track grows more lengths to make things more difficult. The graphics stay above par even with the more resource draining courses. Your own vehicle, while there is only one, looks great as it races along the track. One complaint about the vehicle is that there is no customization option, or even the ability to select between another vehicle and the default one.

As you gather different orbs you will see bits of fireworks pop in the sky with the color you gathered, also as you race the track slowly changes colors which is a nice touch to the environment. Couple that with the occasional pyrotechnic during bits of the track and you will see many things happening around you that look spectacular.

Sound:
Of course sound is the key point to rhythm based music games, as well as the part where they must show when you begin to fail. In Rhythm Racer 2, the music plays fluidly as you race along the track no matter how much is currently happening on the screen. On top of that as you hit the certain glowing orbs the music stays at a consistent beat and as the line fills up the sound triggering a higher multiplayer plays. 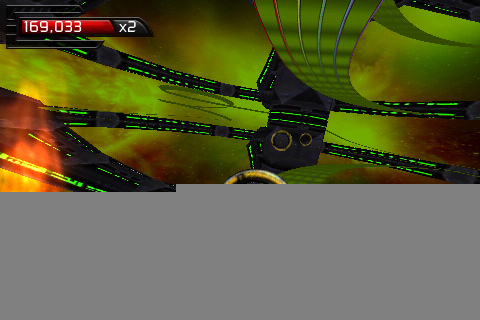 Flying your craft along the track is very simple but quite fun.  As you race down the track you must steer by tilting the iPhone/iTouch in the direction that you want to go.  The motion controls are very responsive and drifting along the track to pick up harder combination of orbs brings a nice sense of accomplishment when you manage to retrieve every single one.

When you begin to play Rhythm Racer 2, you will notice that you will only have four different songs to choose from initially. However this is not the limitation of the game, as you can purchase more song packs for only $0.99 each. The four initial songs however are very entertaining and cover a couple of the music genres, so even the temporary player will find themselves unable to put the game down as they try to gain a better score.

The whole part of the game is to race down the track and gather as many orbs as possible, and when certain amounts of orbs are obtained your mutliplayer increases thus giving you more points. This is a very simple premise and works exactly as it is meant to, establishing the player and the music in an enjoyable format. Plus when you hit the jump and fly through the rings, you can steer yourself through each ring and earn many points, and catch some serious hang time.

There are three different difficulties; Practice, Pro, and Master. It is impossible to fail during a song so you do not have to worry about becoming overwhelmed with a difficulty increase. Instead Rhythm Racer 2 only gets more enjoyable with the higher difficulty as the orbs are more plentiful and the track is larger. 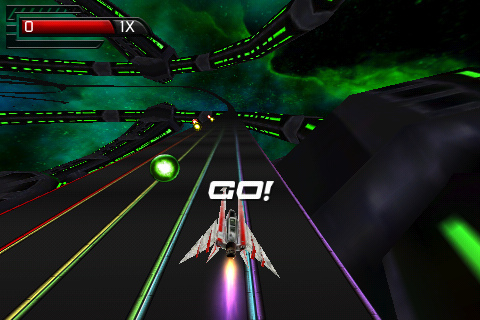 While the track does grow in size, it does cause the occasional hang up during a run down the track. The screen will occasionally lag momentarily to catch up with itself, causing a jump on the track and a loss of your current pick up streak. I only experienced this during Master mode, while the other modes played fluidly.

Overall:
Despite the occasional graphic hang up and the small amount of starting songs, Rhythm Racer 2 is a fully effective music simulating game. Rhythm Racer 2 is exactly what you would be expecting you download it.  With a sleek appearance, and a simple and fun gaming experience you will have an app that you can pick up at any time and play.  Plus with the addition of more songs to download in the future, you can continuously expand your music gaming library.

I give Rhythm Racer 2