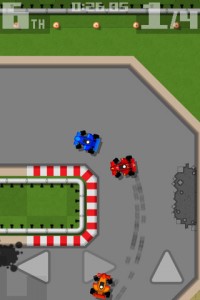 Retro Racing is a top-down old school; micro machines style game from the same developer as Amiga and Nitro from the 90’s. This game follows their tradition, but this time around on the touch screen, and the simple controls translate well to such a device. Left, right and accelerate, that’s all you get and that’s all you need. Everything old is new again, and this is the sort of the game that works perfectly on a platform like the iPhone, taking up small amounts of time for a single race and it’s easy to pick up and just go. I quickly went for a race just then and it was great, it also happens to look pretty cool and the menus are slick.

8bit graphics are all over the place these days, from T-shirts to street art and even tattoos. Most people born between the late 70’s and 80’s loves them, I’d say it’s coming to point of saturation now, but Retro Racing still has it’s charm. It runs beautifully in high resolution, and the primary colour palette works well against the arcade feel. To a degree all the tracks looks fairly similar, but the diversity does open up later on. The game happens to run at 60fps as well, which is pretty awesome.

The sound effects are fairly standard, they sound like Race cars should, but I’m not exactly a rev-head expert. And I’m all for trashy rock tracks at title menus (with solos), and that’s what Retro Racing gives you. It’s theme takes you back in time, to when games were simple, yet designed down to the last detail. It would be nice to have the option to play with landscape mode though, especially as the multiplayer mode (iPad) offers a wider view of the action than single-player does. 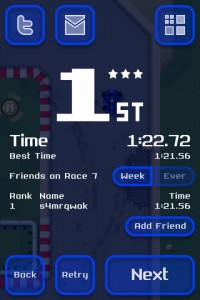 Retro Racing is fairly short, on the surface it doesn’t look like there’s much, but once you’re used to the controls it does offer more longevity, encouraging you to get the best placing. There’s no career mode, it’s basically like an arcade game against AI opponents around the 12 tracks. You basically start the races slowly, the opponents start a bit more quickly, and you spend the duration of the race playing catch up. But the A.I. is pretty decent and they’ll defend their line and even make mistakes, and the front two cars are the hardest to catch, as they should be. If you win, you get some Game Center achievements, a few stats and the opportunity to try again or progress to the next race. Simple, huh? The multi-player fun comes on iPad where you can split the screen and engage in some face-to-face tablet-sharing (its an intimate affair), which is pretty old school in nature. To be honest I didn’t like the controls on the first run, but they catch on pretty easy and once they do, it only gets better.

There is depth to the core of the game, you’ll notice this with the little power ups that are strewn across every track, hidden in various corners and nooks. There’s a standard nitrous power up, but other collectables upgrade your little racer for the rest of the current contest, tweaking speed, acceleration and grip. And as races become more difficult, it can be vital to use the shortcuts throughout the track and find the best way, so you can win. Once you’re used to the vehicle physics and control of the game, it’s quite satisfying to skid around bends and basically dominate the trac, the skid mechanic is quite nice. Retro Racing is one of the more unique racing games on the App store, there are others like it, but RR makes you think: why hasn’t someone done this before? And it’s possible that someones tried, but just never done it this well.

This is a brilliant little racer for what it is, simple fun. The Game Center implementation is well done, the graphics will remind you of the good ol’ days and the game walks between the lines of casual and hardcore. What’s not to love?

While Retro Racing doesn’t necessarily last long, it’s great while it does, and there’s always the quest for first place finishes on each track and iPad multiplayer to get the most out of the game. I should mention that these screenshots don’t do the game justice, pay the 99 cents and check it out for yourself. There are downloadable items around as well, and hopefully more tracks and online multiplayer will become possible in the future (there’s a news section in the main menu). Retro Racing is a pocket sized arcade game, lovely crafted, and it shows.