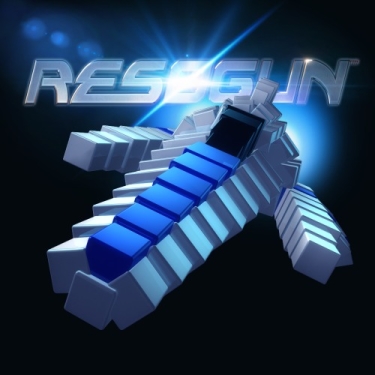 Overview
Every console launch needs a handful of games to keep the early adopters happy with their purchase decision. Housemarque, creators of the PlayStation 3’s Super Stardust HD, have been called in by Sony to create that sort of experience for PlayStation 4 owners. Heralded as one of the strongest must-have titles of the PlayStation 4, Housemarque and Resogun have some big shoes to fill. How does the game stand up? Does it live up to the hype or is it stardust in the wind? 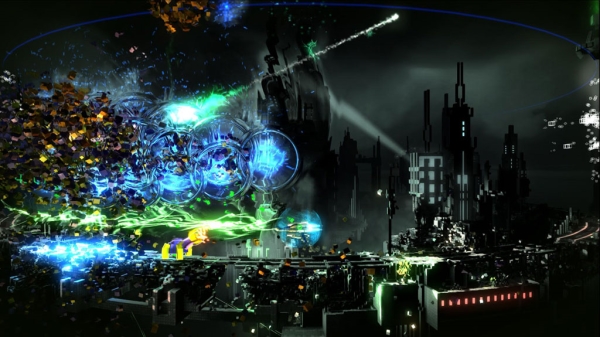 Gameplay
Through and through, Resogun is your quintessential shoot ’em up. It’s been completely engineered from the ground up to satisfy the masses as the video game industry enters a new era. At its core, it’s a two dimensional, twin stick shoot ’em up. You’ll fly up, down, left, and right, taking out foes and racking up your score.

One of the twists that makes Resogun so unique is in the fact that its two-dimensional gameplay is actually cylindrical. You will, indeed, fly left and right, but if you keep going you’ll eventually wind back around on yourself. You can see virtually the entire playfield at once. This gives you a great sense of presence, letting you see the enemies and obstacles just around the bend. It also lets you fire around the cylinder to take out foes. 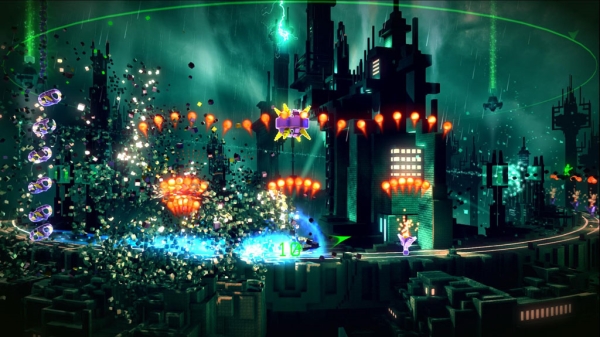 To call the game a twin-stick shooter feels like a bit of a misnomer. While it’s technically accurate, the right stick really only registers whether you’re shooting to your left or right. You’ve got to be quick and accurate on your maneuverability to get the right positioning for the attack. It takes some getting used to, but quickly feels fluid and accurate.

Housemarque made some unique design choices with Resogun that pay tremendous dividends. First, each level has 10 humans trapped in boxes that you can try to rescue for bonuses. As you’re fighting the normal enemies, “guardians” will appear. Taking out all of the guardians will let one of the humans out of their cage. You’ll have to rush to snag them, but picking them up and taking them to safety always gets you some sort of bonus – shields, weapon power-ups, points, extra lives, and so on. Saving all 10 humans on each level can prove quite difficult, but it’s an endeavor well worth your effort and quite gratifying. 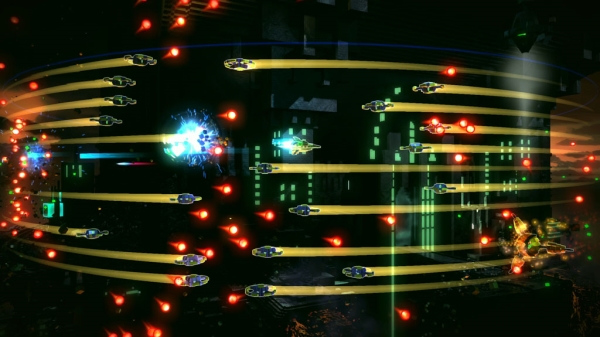 Each level is set up in three basic phases. In each phase, you’ll have a set of enemies to take out while saving humans and powering yourself up. Each phase gets progressively harder, with wider, more difficult enemy variety. Phase three will always finish off with a level boss that will have you dodging bullets and zipping around the entire tube for the best shot. The bosses provide fantastic challenge, but the cost of failure is high. It can take a few minutes to get to them, and a loss means completely playing the stage over again. Beating them, though, causes an “armageddon” where everything in the world sort of explodes into pixels. It’s beautiful to see and presents a great payoff for your hard work.

As you play through the levels, you’ll earn a score multiplier. Each enemy kill will give you a little more added on. You have to stay on the ball, though, as a temporary lapse in the killing will reset your multiplier. You also have to rush around and collect green particles, which actually amount to your score. It keeps the tensions high and keeps you in the action if you’re working for a high score. 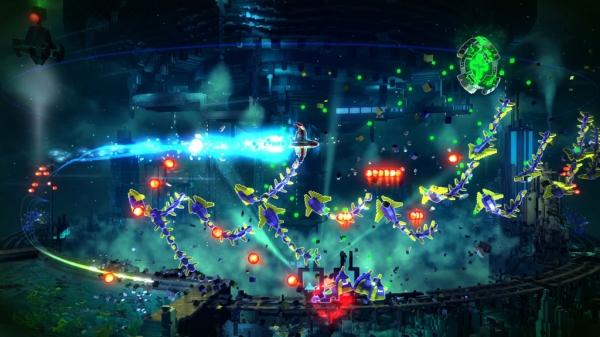 On top of your standard left/right cannon, you can earn a couple of other unique ways out of sticky situations. The one most familiar is a bomb. Using one of these bad boys will send a massive shockwave around the cylinder, destroying everything in its path. You can also earn an “overdrive”, which turns your cannon into, effectively, a giant flame of plasma destroying everything it crosses, including bullets. Finally, you can use a boost to both jet out of a sticky situation and take out anything you hit on the way. They all provide a visually impressive, unique twist to the gameplay.

At five levels, the campaign itself isn’t terribly long. You can usually play through a level in around 10 minutes. Increased difficulty or failure can increase that, obviously, but you’ll want to come back time and time again even after finishing all of the levels. The game is rich replayability, giving players loads of trophies and high scores to chase. The euphoric game loop of destroy and survive will keep you engaged as well. 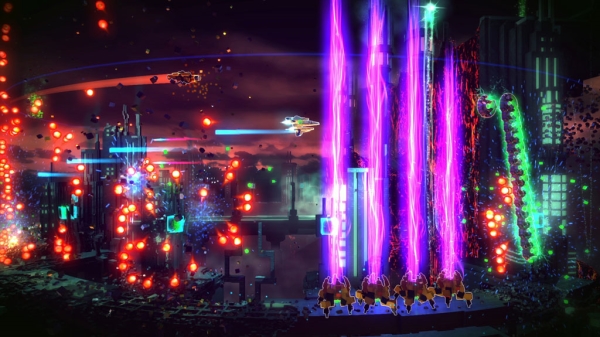 Visuals & Audio
Obviously, folks expect a “next-generation” launch title to look impressive. Resogun does not disappoint to that effect. The game is full of bright, vibrant enemies and effects. The look and feel are fantastic, with fun enemy design, unique bosses, and intense eye candy as the everything in the world explodes. In fact, so much can be going on at one time that you can lose yourself in the fray, quite literally, causing a death you could have otherwise easily avoided. The bottom line, though, is that the game looks jaw-dropping in motion.

Resogun‘s sound design delivers just as you’d hope it would. The soundtrack is packed with techno-driven themes that perfectly compliment the shots and explosions on screen. Utilizing the controller for the occasional audio cue was also a brilliant, well implemented touch.

Overall
Resogun is a fantastic game. It’s easy to pick up and play quickly, but provides enough challenge and depth to keep you coming back for quite a while. The game looks fantastic and the sound is catchy and engaging. If you own a PlayStation 4, there’s absolutely no reason to pass this game by. The game even launched free for PlayStation Plus subscribers. If you own a PlayStation 4 and you haven’t already done so, go get Resogun immediately.