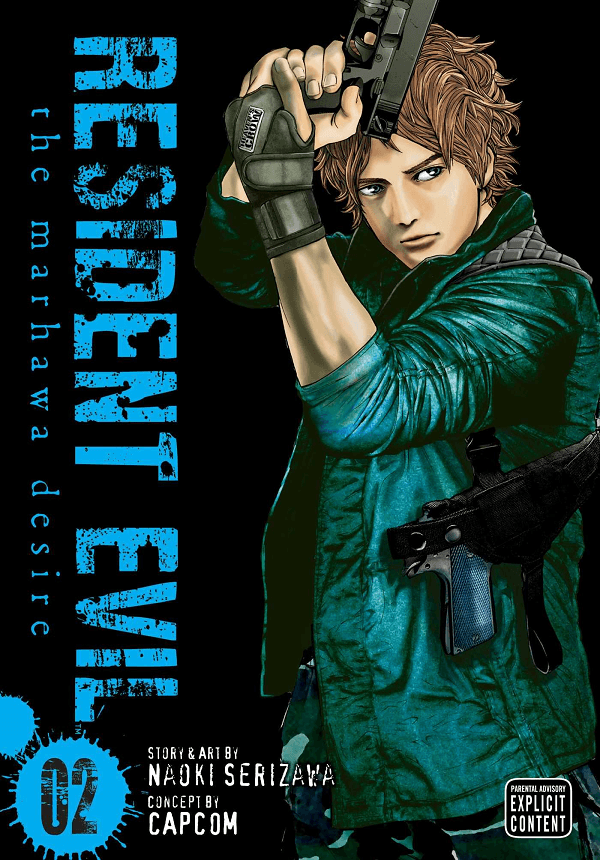 Overview
Although there have been novel adaptations written based on the Resident Evil games and even some original stories in the early 2000s, it was questionable whether or not a series that focuses on zombie action and survival would be able to make a successful transition into manga format. Thankfully that question was answered by the first volume of Resident Evil: The Marhawa Desire introducing us to a believable, albeit too convenient, setting with a fresh set of faces fighting against the beginnings of an outbreak. Will the series continue to find a nice balance between action and storytelling in volume 2?

Story
Before continuing it is worth noting that there will be spoilers concerning the first volume of Resident Evil: The Marhawa Desire discussed in this review and those looking to not be spoiled should go and check out the first volume before continuing. That being said, the story resumes immediately from the end of volume one, with Professor Doug Wright and his nephew Ricky Tozawa, along with two members of Mother Gracia’s trusted employees about to enter an area infested with five zombies that need to be disposed of.

Before entering the maintenance area to take care of the zombies, the group is stopped by Student Council President Bindi who wishes to go with them in order to do what she can to help prevent this biohazard from harming her fellow students. Once they do venture into the area it quickly becomes clear that there is something different about this outbreak than what Professor Wright has seen before in Raccoon City as not only are these zombies capable of moving incredibly fast, despite appearing as zombies classic zombies and not like the Plaga capable of speech.

To make things even stranger, despite being attacked and once again bitten, not only does Ricky continue to show no signs of infection but neither does another member of their party. Mysteries compound one after another when the group discovers that the source of the outbreak appears to be a young cloaked woman only for Bindi to see this woman and believe it is her friend Nanan. While Doug Wright and Ricky remain at Marhawa Academy trying to not only survive but find the source of the biohazard, Chris Redfield and the rest of his B.S.A.A. team continue to try and track them down by arriving at the university and trying to find out where they vanished off to.

Resident Evil: The Marhawa Desire Volume 2 spends quite a bit of time focusing on action as almost the entire first half of the volume is spent on zombie slaying while the second half is all about divulging some of the secrets that have been kept within the walls of the secluded academy, including why Mother Gracia is acting as she is, though the reason is quite thin. Tension continues to be high as the drama ramps up throughout the second half as even the few answers that are given do little to combat the questions swirling around the origin of the outbreak and who the mastermind could actually be.

Artwork
The character designs remain as impressive as ever, though this time the focus is spent almost entirely on the characters at Marhawa Academy so we see very little of Chris’ team. I must say that Naoki Serazawa has a way with detail. Between the amounts of gore present in the action sequences, which has been ramped up this time, as the group battles against zombies utilizing not only sledgehammers and swords, but also a crossbow and the various small details such as the changing designs on the back of Ricky’s clothing there is a lot to be seen in this volume. As such it is a big plus due to the way that Viz’s Signature label means that every volume is printed in a larger format that allows for this detail to be seen better.

Extra Content
Resident Evil: The Marhawa Desire Volume 2 begins with three color pages that focus on the group about to enter the maintenance area and face off against the zombie threat. Oddly enough, this is then followed by a four page summary describing the events that happened in the last volume presented via white text on black and blue pages featuring small black and white panels to show off the characters introduced to the story so far.

Overall
With the plot thickening in Resident Evil: The Marhawa Desire Volume 2 it will be interesting to see what will happen next. The focus on action throughout this volume does lead to a bit of a pacing issue, especially in the second half as the abrupt jump from a revealing piece of information to another battle against a monstrous creature feels like the writer had to rush things at a breakneck speed to end on a cliffhanger. Thankfully due to the numerous unanswered questions and the quality of the artwork, this is more than enough to keep readers invested in the fate of Ricky and the rest of the academy.