Resident Evil Mercenaries Vs is an unexpected move for the Resident Evil series by Capcom, and as a spin off title for the franchise, it surprisingly works well. However the final product that the fans receive feels more like a prototype, BETA, demo or even an experiment rather than an actual finished game for purchase. Unlike the majority of games by Capcom and the Resident Evil series, Resident Evil Mercenaries Vs looks and feels unfinished and unpolished, and seems like a showcase of what the game could be to show the games engine. There is plenty of room for improvement here, and there is quite a lot that holds it back from its true potential. Whats sad however is that this game could’ve, and should’ve been so much more, and had the potential to be quite an outstanding game, rather than a massive let down. 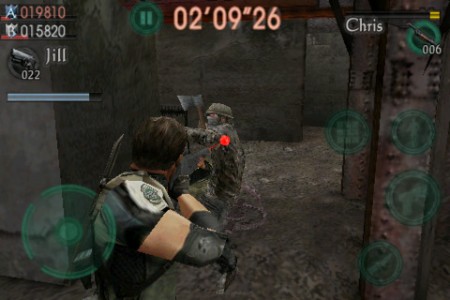 Resident Evil Mercenaries Vs is a online multiplayer third person shooter, placing 4 players in an arena and has them fight to the death. What shakes things up however is that the arena is infested with zombies*, so you will have to defend yourself from the zombies while hunting down other players. The game adapts the same engine and gameplay as the iphone adaptation of Resident Evil 4 so fans of that title will feel right at home here. While a bit clunky, the controls do work well in most cases, so the basic gameplay is rather good. Aiming and shooting is done well, and running around the arenas can be awkward at times, but this isn’t too much of an issue, as most of the time you’ll be standing still aiming and shooting. This becomes a problem though, as shoot outs begin to not involve strategy or accuracy, but rather who can shoot and reload first. The two of you will be standing still, facing each other shooting, hoping one will fall down before the other. Sure you can heal yourself, run away and switch weapons, but while doing that, chances are you’ll get shot and die. Switching weapons and healing must be done like most Resident Evil titles on a separate screen, but nothing stops or pauses so you’ll often be attacked while this happens making things awfully frustrating. Whats just as frustrating as well is while shooting a player, the zombies may attack you or come out of nowhere making it harder to kill your enemy. Sometimes its good because it can make things more of a challenge, but its usually more of a nuisance than anything else, and the bigger challenge really is trying to stay interested in the gameplay. At least when you fall to the floor you can kick away nearby enemies. There also is a single player mode called ‘coin shooter’ where you run around an empty arena finding and shooting hidden coins, and is fun for about five minuets, but in the end of the day its just target practise and it gets really old, really quickly. It’s also quite strange its only available for offline mode as well, since the game does focus mostly on online play.

*(Well, technically by Resident Evil 4 standards there ‘Los Ganados’ not zombies, but stuff that Im calling them zombies anyways!) 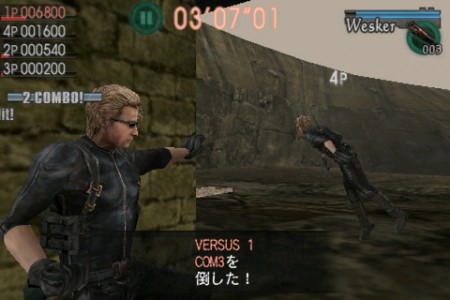 For a game based focused on online play, it doesn’t really encourage players to play it. Up to four people can play a match, but there are only three characters to choose from: Jill Valentine,  Chris Redfield, and Albert Wesker, so you’ll always see a double of at least one character. Furthermore, there are only three stages to play on, which are all quite similar to each other, with only slight, subtle differences. There are only two modes in online play: team vs and free-for-all, thats it. Offline there’s one extra mode, Coin Shooter, and its a mystery as to why you can’t play it online. There is a single player mode that can be played offline, but its exactly the same as the online play just with bots. And thats it, for the whole game. No leveling up, no upgrading, no online leader boards, no community services, no replays, no perks or killstreaks, no awards and nothing to encourage further playing online, and offline play is basically just training for the online play. The game is literally the bare basics, and is a is simply just a weak effort. Capcom promises to introduce more stages and characters later on in updates, but I’ll be surprised if anyone actually is still playing by then, as the current game is quite an uneventful and unrewarding experience, presented poorly. At least there’s text saying things like ‘2 Combo!’ and ‘Weak point hit!’ but that simply just doesn’t cut it. 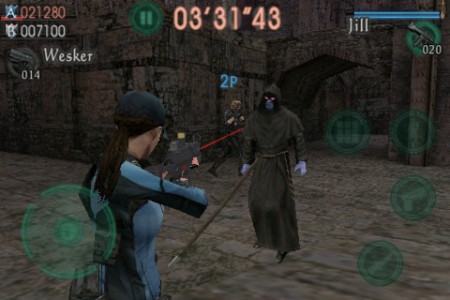 If a game  focuses on online multiplayer, one would expect the online multiplayer to be good. As mentioned before there is very little to encourage the player to keep playing with no leveling up, upgrading, online leader boards, community services, replays, perks or killstreaks, awards or anything similar, and no sense of community as you can’t chat to or meet anyone, so for all you know your just shooting a bot with a funny gamer tag. Whats worse is simply just TRYING to play the game. It will take forever just to find 3 other players, and once that happens, you gotta hope you don’t get disconnected or the host quits. The worst part is, since your on an iPhone, if you get a call or a text, your instantly disconnected as well. Whats the point in purchasing an online multiplayer game if it takes so long just to find someone to play with? At least the lag isn’t that bad, but it still does lag sometimes. 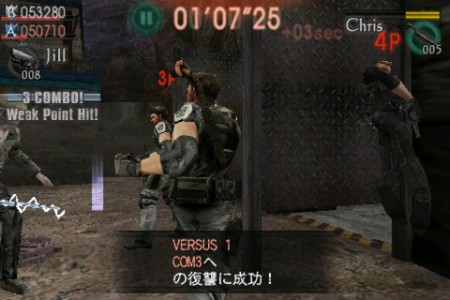 Sadly, Resident Evil Mercenaries Vs sounds just as bad as it plays, and looks slightly better, but not by much. The soundtrack is upbeat and filled with what sounds like  jazz or funk bass guitars, killing the mood of the game . Its hard to take the game seriously with a soundtrack that sounds so out of place. The graphics aren’t terrible, but they aren’t anything special to look at either. In fact, they look slightly worse than Resident Evil 4 on the iPhone, which came out quite some time before this title. It doesn’t appear to take advantage of the iPhone 4’s retina display either which is a massive shame. 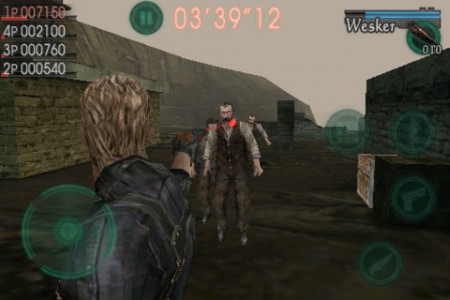 The idea behind Resident Evil Mercenaries Vs is awesome, its just a shame the game didn’t turn out so good. Im 100% positive that if Capcom spent more time adding extra things such as levels, characters, modes and features to make the game more than ‘stick 4 guys in a square shaped arena, give them guns and throw in some zombies’ this could’ve been an epic must-have. Instead, we have what feels like an unfinished, basic game stripped down to its bare basics, with next to no highlights or anything to make it a memorable game. Its an online multiplayer game where its a challenge to even find sometime to play it with. At least Capcom has a good concept, and took a risk with it, that I can admire.

-Graphics appear to not take advtange of retina screen capabilities
-Connectivity Issues
-Disconnected from a game if you get a text or phone call
-No upgrade, leveling systems or anything to encourage an online community
-Music sounds out of place and doesn’t suit the gameplay
-Only 3 characters and 3 stages
-Changing weapons and healing can be troublesome
-Shootouts are usually standing still while shooting each other at close range