Resident Evil 5 was released on the 13th of March 2009 last year on both Playstation 3 and for the first time Xbox 360. The response to the release was pretty much split down the middle.  On one side we had gamers that had never seen the game before and were used to action shooters like Halo, Gears Of War etc.  On the other side of the road there were the hardcore Resident Evil fans that were eagerly awaiting RE5 to make it’s appearance so they could pick up from where Resident Evil 4 left off and continue the story of this fantastic franchise.

The new comers to the franchise were quick to complain about its control system, saying it was  “Wrong” to stop and sho0t as it’s not how your meant to play these style of action games,  also not being able to jump or roll out of the way was a big problem as well.  This resulted in a few unhappy people who probably returned the game and went back to playing Halo and Gears Of War.

With that out the way the remaining gamers who embraced the game play mechanics, which thankfully stayed true to the franchise since day one, and something I am very glad was not changed, as it would of ruined the entire experience, were in for a ride of their lives as they set out on an epic journey across Africa. 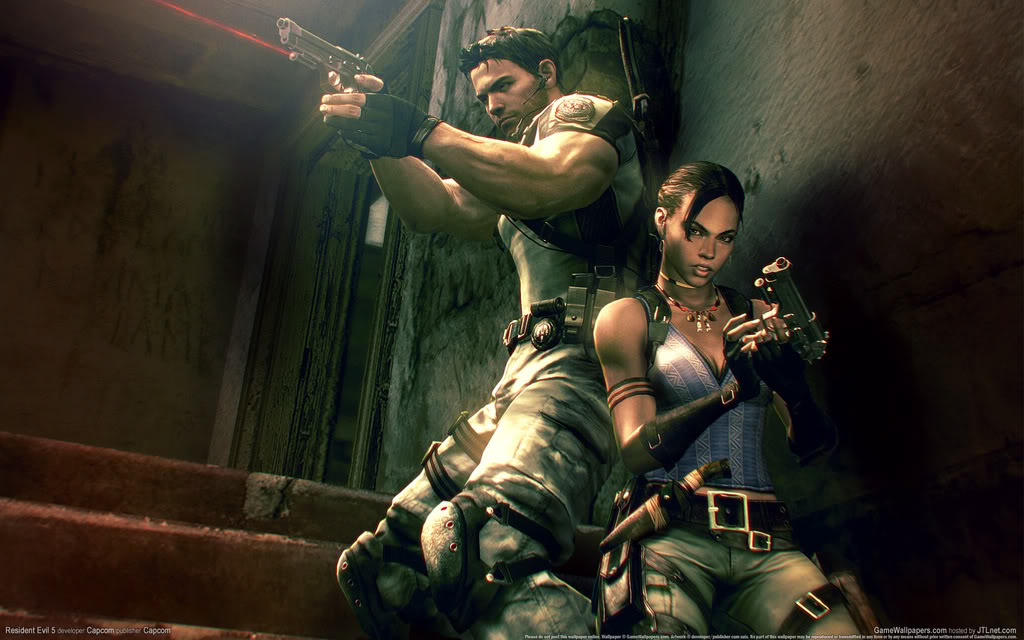 Fast Forward 1 year ahead and Capcom have released Resident Evil 5 GOLD Edition, an all in one package that includes all the content released since it’s launch at a great price.  If you haven’t yet set foot into the world of Resident Evil, now is your chance to pick it up, equip your pistol and shoot some Kijuju right between the eyes !!

If you’re not familiar with the story for Resident Evil 5, let me take you on a crash course in Resident Evil 5 101.  Our story picks up with original STARS member Chris Redfield, now a fully fledged member of the anti-terrorist group called the BSAA.  Who has been sent to Africa to investigate a man by the name of Irving, a black market salesman involved in selling illegal bio weapon products to terrorists.

For the first time ever in a Resident Evil series the player does not go at it alone, Capcom put huge emphasis on team work with co-operation being the name of the game. Therefore Chris is joined by a local operative called Sheva Alomar.  Playing alone via single player will have Sheva controlled by the game AI.  She’s not the sharpest tool in the shed when not controlled by a human player, but with tactical and strategic item placement Sheva does her job well, even on the hardest of difficulty levels.  On the other hand when you’re joined by a friend this is when the fun and action really starts to pick up as you’re both tactically scrambling to find the best vantage points to take down enemies as well as SURVIVE !!

Resident Evil has a total of six fantastic action packed chapters that will keep you heart racing every step of the way especially when you’re playing with a friend on the hardest difficulty.  The dialog, soundtrack, game atmosphere and visuals are amazing, fans of the Resident Evil series will not be disappointed as a lot of questions are answered, puzzle pieces put in place and a few characters from the past make an appearance.

One thing that true Resident Evil fans have mentioned is that the game has taken a more action feel than its original survival horror origins.  In all fairness this is somewhat true as there are less scare moments, but don’t worry Capcom have replaced them with heart pumping adrenaline moments where your frantically running for your life or trying to save your fallen comrade in battle all the while making sure your fully healed and armed to the teeth with ammo so that you can blast your way out of deadly situations.  It might not be Survival Horror but it sure is a BATTLE FOR SURVIVAL !!

Desperate Escape picks up around the final chapter of the game, here you take control of Jill Valentine and Josh Stone.  Your mission is to escape the Tri-Cell Compound in an action packed hour long mission.  Enemies are everywhere and the headshots are the special of the day, there is not much in terms of strategy, your sole objective is to make it to the escape helicopter alive.  Enemies are relentless and will keep you on your toes, you will need to gun your way through, it’s intense a little repetitive but certainly great fun with a friend. 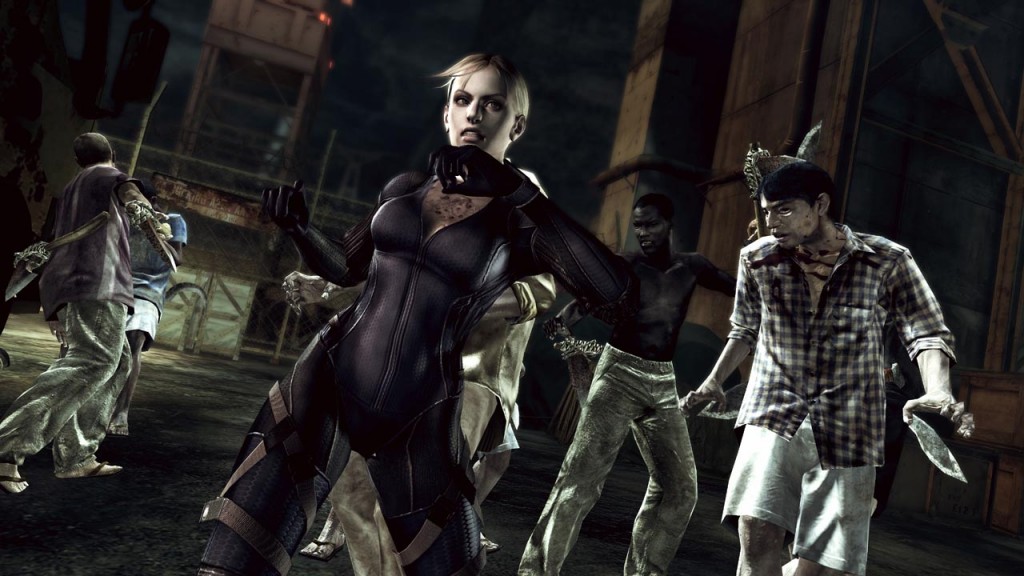 Lost in Nightmares will have you playing as Chris Redfield and Jill Valentine.  This story is not part of Resident Evil 5 but takes you back to a section of Flashbacks you see in the game where Chris & Jill are exploring a deserted mansion in hopes of finding the missing head of Umbrella Ozwell. E. Spenser.  It’s great to actually relive this part of the game as you get to experience a different style of gameplay.  The pace is a little different compared to Desperate Escape, here tactical and strategic planning is needed to get ahead.  I personally enjoyed this mission much more, and to top it all off the Spencer Mansion was absolutely amazing.  If you’re a true fan of the Resident Evil series Lost In Nightmares will be a more enjoyable experience. 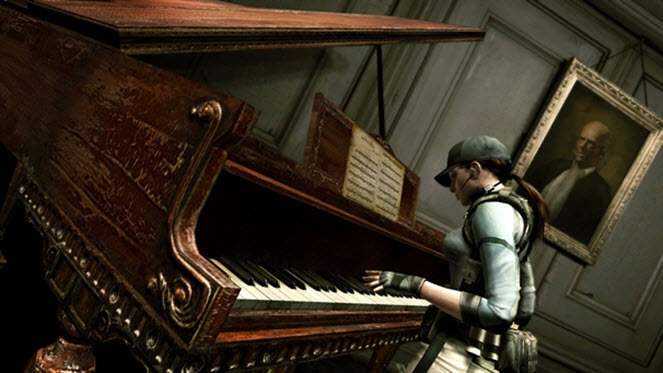 Other extras jam packed in Resident Evil 5 Gold is Versus and Mercenaries Reunion.  These are multiplayer levels where you’re playing in teams to take down hordes of Majini whist gaining top scores and working against the clock.  Multiplayer allow you to pick certain characters, some are locked until you have enough money to unlock them.  The new additions included with the Gold Edition are Excella Gionne and Josh from Resident Evil 5, and originals from Resident Evil and Resident Evil Zero, Barry Burton & Rebecca Chambers.  Topping it all off are the two outfit packs for Chris & Shiva which make you look a little on weird side, but hey you need to look a little weird and a bit whacky when your popping off heads with your Magnum. 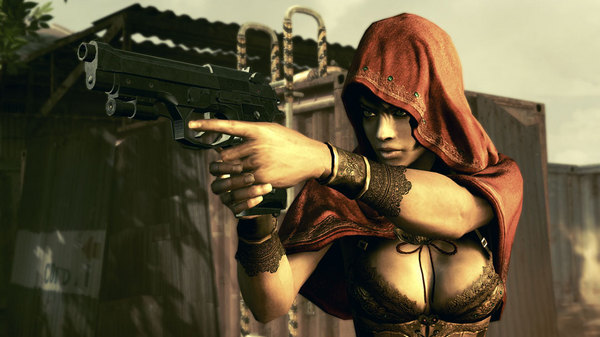 One really important note to take into consideration.  The Bonus stuff included with the Gold Edition isn’t readily available from the get go.  You’re going to have to play through Resident Evil 5 story to unlock them.  If you’ve completed the game, then you’re in luck.  As long as the Resident Evil 5 GOLD disk can access your save game then everything should magically unlock and you should be right to go as you’ve already done the hard yards.

With heart pounding moments around every corner, bonus content, 2 great episodes, extra multiplayer characters, and weird and whacky costume packs, I think Capcom have really hit the nail on the head or should I say shot a Majini in the head with this one.