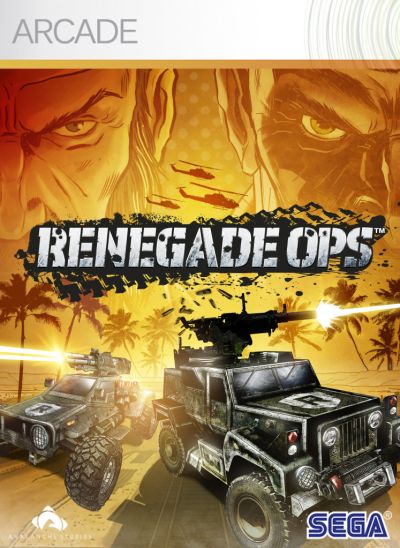 Renegade Ops is a top down twin stick shooter with combat that is entirely vehicle based. It was developed by Avalanche, the studio behind the Just Cause series, and boy can you tell. Renegade Ops even uses the same game engine as it’s big brother, and combines well paced chaotic action with amazing visuals to pump out a great little XBLA experience. 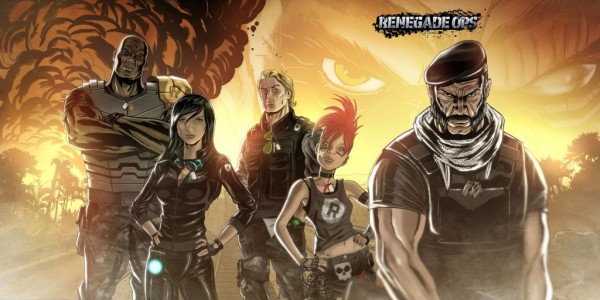 A missile launching psycho going by the name of Inferno is causing serious problems in the world. As politicians sit around debating how best to talk him down, one man takes a stand, throwing down his military responsibilities and going straight for the jugular. General Bryant forms the Renegades, and sets off to bring down Inferno in his own explosive style.

Players jump in as one of the four members of the team and battle through Inferno infested jungles, towns and temples in pursuit of the man himself. The Renegades are soon joined by Natasha, an ex Inferno ally set on bringing down her old boss…

Sure, the story is all cartoon stuff but that’s all Renegade Ops needs, and it pulls it off well. Cutscenes are handled via the usual comic book style panels, and come complete with some over the top voice acting and pantomime dialogue. The banter between Inferno and Bryant does fall a bit flat sometimes and could have been abused for some more laughs, but the story is strong enough to give all the action a purpose. 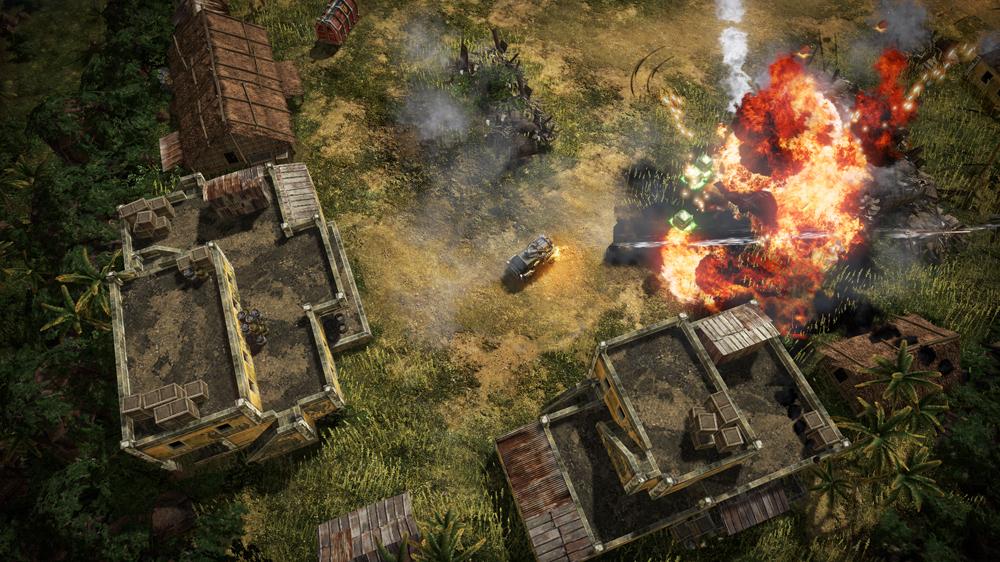 Players have a choice of four different characters, each with their own special ability and vehicle style. The abilities are nicely balanced between the defensive (armor plating, EMP) and the offensive ( heavy gun, airstrike), and can be upgraded as the game goes on. Every level gives you the chance to switch character so there is plenty of opportunity to find your niche without having to replay the early stages.

In game controls are a simple combination of left stick to drive and right stick to aim and shoot. The driving is easy to handle without being boring, and when the combat kicks in you have to be able to combine it well with your shooting – there’s no way to survive standing still! Special abilities and secondary weapons are unleashed with the shoulder buttons and there’s a turbo button too – although a bit more speed would have been welcome here.

Players are directed through the levels by primary and secondary mission pointers, which along with the timed nature of the primary objectives maintain a good pace to the gameplay. Primary objectives are mission essentials like destroying missile silos and taking out tanks, whilst secondary objectives tend to be fetch and carry tasks that gain achievements upon full completion.

The firefights happily make up most of the gameplay, and are big, noisy affairs that see you doughnutting around like a madman with all guns blazing. Demolishing enemy vehicles gives you health, weapon upgrades and secondary gun ammo, so when the going gets tough it’s essential to keep blasting away to survive. Secondary weapon ammo can be a bit hard to come by, a shame given that the rail gun, flamethrower and rocket launcher all add a fun kick to the combat. 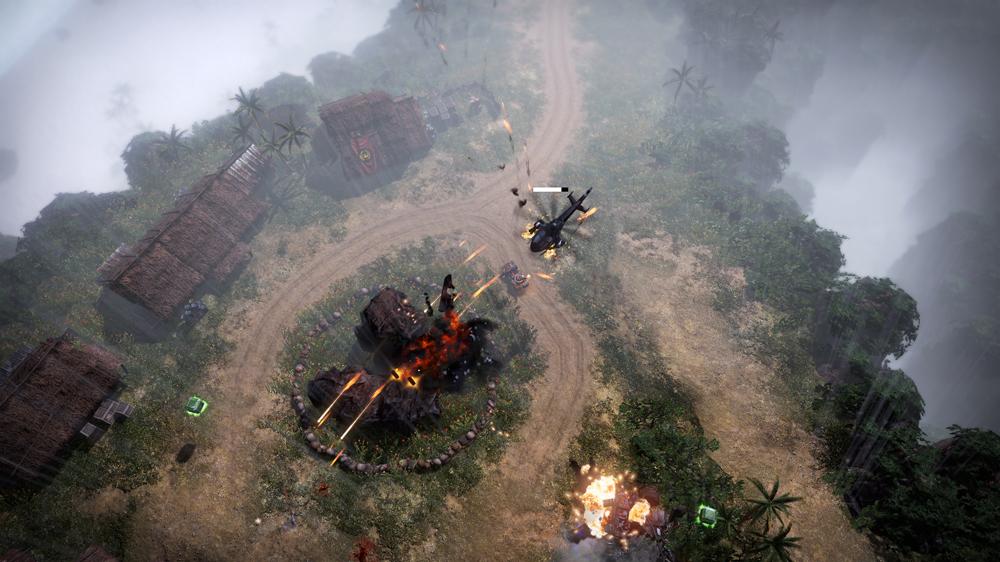 The environments are all destructible too, a great addition that sees you ploughing through buildings mid fight, bringing them crashing down in clouds of dust and rubble. Level settings are nicely varied and see you cruising through lush jungle and grimy mines and speeding around ancient pyramids in the dark. There are always several paths to take and the size of the areas is impressive, but I did find myself occasionally getting stuck in trees or corners – very frustrating when the enemy’s about.

Enemies range from foot soldiers to warships, and a few battles give you the chance to pilot a helicopter instead of your usual vehicle. These sections strip you of your special ability (in my case the armor plating) and put a lot more emphasis on your piloting skills. As well as being a lot of fun (and a bit more of a challenge) they add a taste of much needed variety to the missions, the run and gun structure of which never really changes. Boss fights do crop up, but for the most part are a repeat of the same enemy over and over again (Inferno’s dead! Oh no he isn’t! Oh yes he is!).

Playing solo is enjoyable, but multiplayer is where this game takes off. Co-op is available for two players locally and up to four online, with each player able to act independently -so there’s no need to keep to a magic distance for fear of suddenly being teleported away. Two or more players equals to a hell of a lot of chaos, and the leader boards provide a bit of incentive to keep playing Renegade Ops after finishing the campaign. 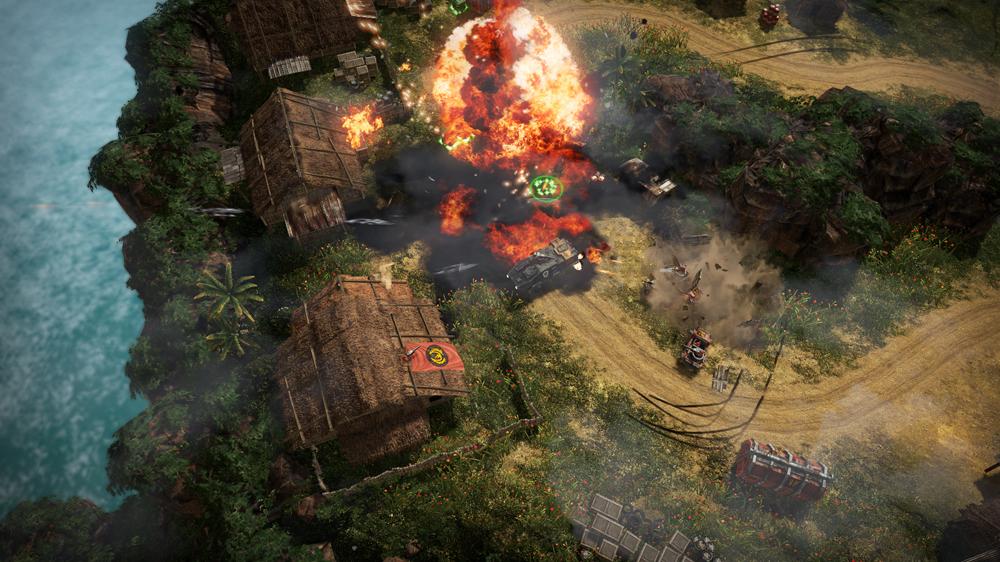 Renegade Ops is probably the best looking XBLA game I’ve played. There’s no cartoon  cop out here, everything is realistically styled – water shimmers in the sunlight, your vehicle kicks up a dust trail as you barrel along jungle paths . The environments are incredibly detailed and everything from bunkers to electricity pylons can be destroyed. It’s all very reminiscent of Just Cause, and of course that’s nothing but a good thing.

Considering the massive amount of chaos that can be on show the frame rate copes extremely well. The screen can be totally engulfed by explosions, gunfire, a dozen different vehicles, flamethrowers and collapsing buildings and yet the action doesn’t miss a beat -it’s very impressive!

The sound effects add a proper sense of impact to all the destruction – and the explosions in particular are fantastic. The music never really registers in game but it doesn’t have to, there is already plenty going on to keep your ears occupied! Sadly I do have to mention the horrible jarring noise that can strike when things get busy on screen, but that’s the only thing that mars an otherwise fantastic set up.

Renegade Ops is an excellent game, but is brought down by a lack of mission variation and lacklustre boss fights. It’s also pretty short considering the asking price, but the chaotic fun of the combat and the nigh on perfect presentation definitely make it a worthwhile play. For twin stick shooter fans it’s a must, and is at its best with as many players as you can manage and broken up into small but satisfying chunks.