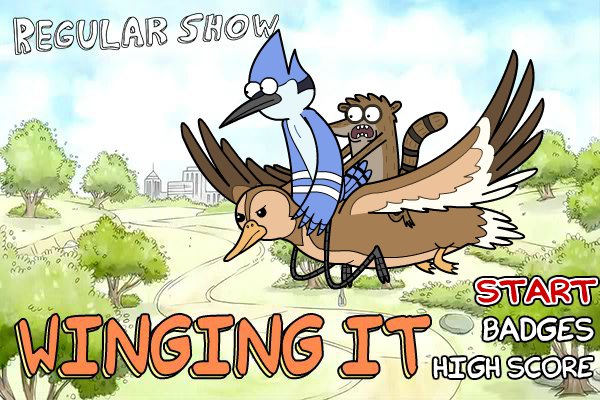 Overview:
Regular Show is one of Cartoon Network’s top absurdist shows currently running and by being absurdist, it makes it pretty easy to make flash games out of it.  You could probably throw darts at a wall of all the different episodes and not worry about something to make into a game.  One such game that has been made is Regular Show: Winging It, which is based around the season 2 episode “A Bunch of Baby Ducks”.  Needless to say Mordecai and Rigby have found themselves in a pretty crazy situation.  The question is, is it worth the time to find out how they get out of it? 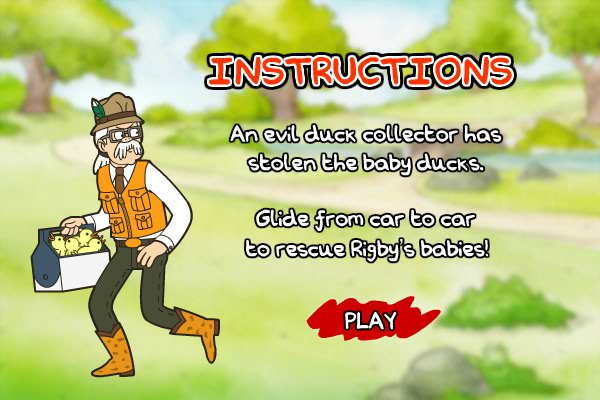 Honestly, not an altogether bad premise for a game as it does come almost entirely from the show itself.  While not very descriptive, it does at least give a very specific goal and clear obstacles to overcome.  Unlike some other series’ based flash games, there are actually some stakes involved in this one, namely the baby ducks getting back to the mother and away from whatever it is that the duck collector wants them for.  So, actually pleasantly surprising to see a decent story flash game based on a TV series, especially in the case of Regular Show.

Gameplay:
Gameplay for Regular Show: Winging It comes in two modes, Story Mode and Free Mode.  Story Mode focuses on Mordecai, Rigby, and the ducks’ mother trying to rescue the baby ducks.  Controls are easy enough in that clicking the mouse is the only action players have to do.  Clicking when not flying causes the ducks’ mother to start flying, gaining height and wafting slowly down, while clicking when flying causes the duck’s mother to stop flying, dropping down quickly hopefully onto a vehicle below.  Players can also stop and start flying in the air to build height back up or to avoid the crow and bee swarm obstacles. 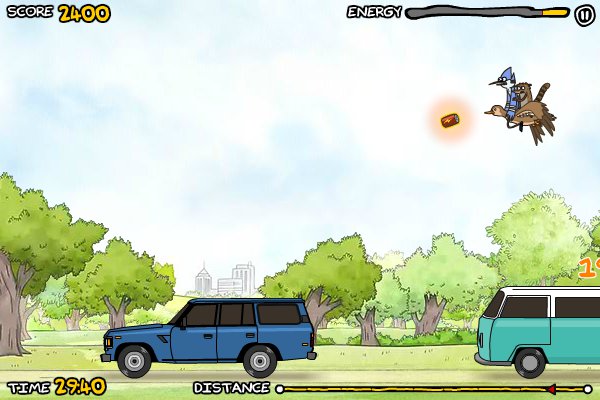 As players should realize, staying in the air going the speed of a motor vehicle is kind of trying, so maintaining flight drains an energy bar, which can be refilled with power-ups.  Should the ducks’ mother run out of energy, hit an obstacle, or miss a vehicle to land on, 3 minutes of time will be taken to prep for another take-off losing it from the 30 minute-total timer to save the baby ducks by.  Time runs out, baby ducks go bye-bye never to be seen again, reach the duck collector in time, Mordecai and Rigby beat the snot out of him and get those baby ducks to their mother. 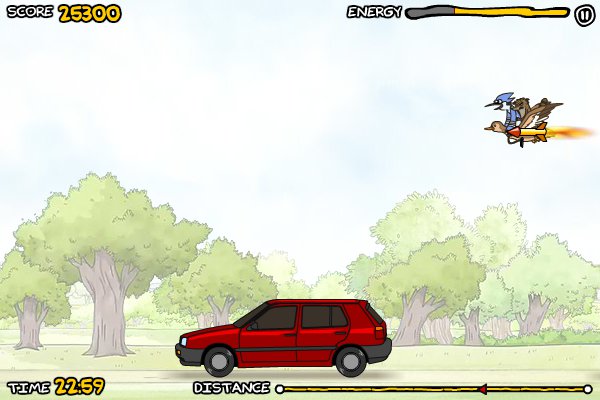 Free Mode on the other hand is exactly the same, but has no time limit or baby ducks to save, just endless road to fly down.  This mode is solely for shooting for a highscore or maybe to practice the controls before venturing to save those poor baby ducks.  In all though, the gameplay is pretty straight forward and pretty easy, with only clicking it makes it a great game for the younger crowd without having to worry about using the keyboard.  Real masters are those that can reach the end of the Story Mode in one flight.

Audio and Visuals:
Regular Show games are pretty good about matching the aesthetic of the show to its games.  Unfortunately, there is only two pieces of music throughout the game, with one being kinda of annoying with the blaring of horns every few piano measures, but luckily this is only on the menus.  The other is is for actual gameplay and it features a good range of musical instruments and even more than that the feel of traffic to go along with the gameplay.  Other audio is the short clips of dialogue from Mordecai and Rigby, of which there is a decent number.  It’s always good to at least let the characters sound like themselves, be it succeeding or failing. 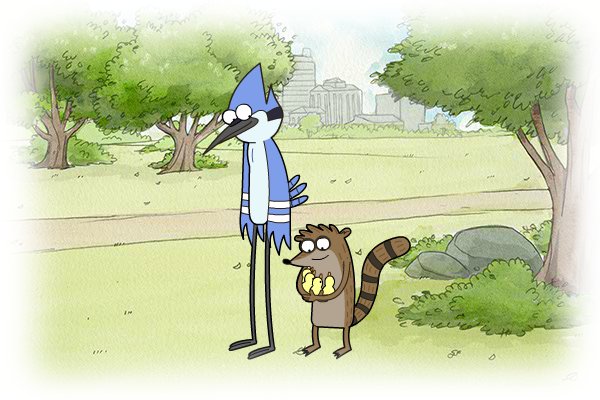 The visuals are pretty much from the show itself, with everything looking almost exactly like it would be on the show from Mordecai and Rigby to the duck collector himself.  The art of the show itself is pretty kind for making a game out of with the thicker outline and watercolor backgrounds.  It makes it pretty easy for anyone to feel like they are in fact playing a Regular Show game.

Overall:
Regular Show: Winging It is a nice little time waster, it’s pretty short and sweet, but anyone that gets really into it can find plenty of fun in trying to complete more difficult challenges they set for themselves or in the Free Mode.  The story mode while not terribly in-depth does provide a welcome surprise in accomplishment for actually getting through it and saving those baby ducks.  Fans of the show would definitely get a kick out of this if they are looking for some time to kill and even non-fans could enjoy the novelty of it.