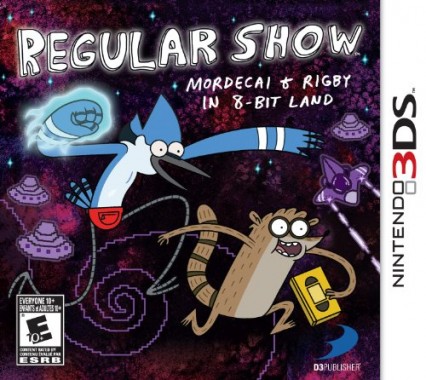 Overview
If you’re a teenager in this day and age and you’re not away of Regular Show…I’m not angry, I’m just disappointed in you. This is one of the few good shows left on Cartoon Network that, somewhat, speaks to the lazy losers that reside comfortable in all of us. Regular Show is often paired up with Adventure Time due to it’s similar “weirdness” and animation style and I can guarantee that fans of one show will be fans of the other. As far as cartoons go these days, Regular Show would have to be one of the best. Every episode seems to walk the very thin line that is reality with most days, for Mordecai and Rigby, starting off as pretty mundane and boring but eventually leading into what might just be the end of existence as we know it and the game? Well, it may just end up the same way. 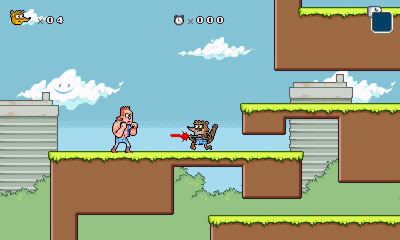 Story
I want to start off by saying that this game actually has no story whatsoever, which actually doesn’t make a huge difference to the game because, let’s be entirely honest, if you picked this game up while walking past it in a video game store you weren’t picking it up as someone not knowing what the show is, you’re picking it up out of excitement that your favourite show has a game and I think the developers knew this because the way the game is set out shows this. When I say that there is no story I may be lying, to some.

The first, let’s say, thirty seconds of gametime have Mordecai and Rigby almost doing yard work but get distracted by the delivery of a brand-new gaming system which, when turned on, sucks them into a scewed and 8-bit version of what seems like their own world. This is where all context for the game stops and what follows from here is a great deal of references to the series and, despite that not being part of the story, is still worth noting down as a quirky ongoing feature of the game that does directly relate to the stories within the series. The only real obviously noticeable environment is within the first world where you journey through the park in which the two friends work, after that it all spirals into craziness which, in standard Regular Show fashion, fits perfect. 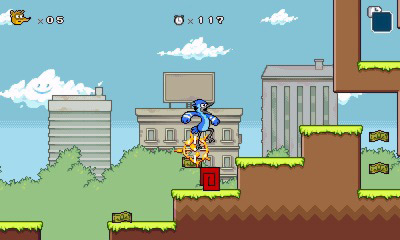 Gameplay
Regular Show: Mordecai And Rigby In 8-Bit Land takes you on a trip back many years as you’re thrown into a world of old-school platforming which, I guess, is why the title is as such. You’re back to basics within this game; you run, you jump, you head-stomp, you get powers-ups and you get very frustrated doing so BUT I am a pretty crappy gamer so maybe it was just hard for me to get through. It takes a lot from other games and not in a lazy way but in a very “Regular Show” way, considering they talk so much about old games and what not within the series it’s only natural that you warp into a level like Megaman and skid across the ground like Sonic.

You start off as both Mordecai and Rigby and you’re able to switch between them with “x” at, literally, any time. Mordecai has greater reach as a jumper while also being able to double jump and Rigby can crawl through tight spaces and is a faster runner, those things come into play a great deal as you make your way through the game. The first few stages you stick to running and jumping, then you’re given a power-up that comes in the form of a mullet and denim-shorts, you’ll just have to watch the show if you want a full explanation of what that is. Mordecai’s version of the power-up allows him to shoot flaming fists whereas Rigby’s power-up gives him the ability to shoot lasers, Mordecai’s seems like the stronger of the two but I COULD be wrong, it may just seem that way. 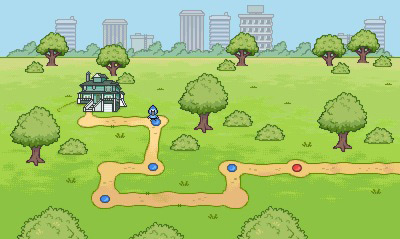 As you go through the game both Mordecai and Rigby get their own “special abilities”; when the background of a stage shows an image of space, Mordecai is able to transform into a spaceship and the game then plays out like a typical side-scrolling shooter. If, however, the background is grey and looks a little “askew” you may use Rigby’s special ability to turn the game into a top-down shooter. When first introduced, the entire levels are played out with their respective abilities but as you venture into the harder worlds you’ll find yourself switching between the two quite frequently.

I d love the idea of special abilities literally effecting how the game is played, what I’m not a fan of was the fact that, essentially, this was it. I tried my best to outright love this game but I found myself wishing for one of two things; either I could stop playing in the weird ability modes and just go back to platforming or I could earn myself some new abilities to use. By the time I had finished the game I’d realised that they shouldn’t have been labelled as abilities because, at the end of the day, that isn’t what they were and it hit me harder than I though it would. Don’t get me wrong, the gameplay is extremely fun, I just wanted a little bit more or to go back to the basics, it was left in an odd place. 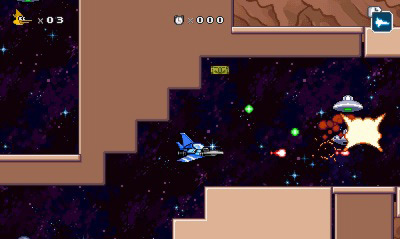 Another thing that really dampened my experience with this game is the collectables; in every stage there are three golden VHS tapes to find, finding them gave you a nice shiny coin icon over that level that made you feel good but, in end, unlocked nothing but production art and music which is, more or less, nothing. There were also Bum Bags/Fanny Packs to collect around levels and they did the same thing. I actually got every single VHS tape in the game and I thought it would do something for me but it never eventuated into anything which made my efforts a complete waste. It was great as a download game, only to be released on the eShop but this is a full retail game, on shop shelves that is going for over fifty dollars, I just expected that little bit extra. Maybe I’ve become to greedy as a gamer, I just felt like this game could’ve been perfect. 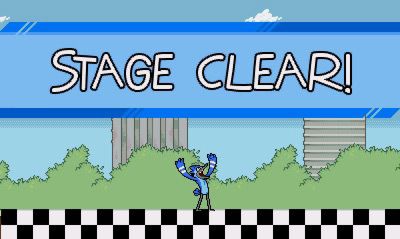 Audio And Visuals
Now when I think of something “perfect” in this game, this is exactly what I think of: The Audio and Visuals. They are exactly how I pictured this game; absolutely fantastic and, not only that, they did extreme justice to the series and the characters within. The sprites and the animations as well as the designs of the characters in those style were done flawlessly, absolutely flawlessly. The chip-tune soundtrack was just as good, it even got to the point where the duo’s “OOOOOOOOOH!” was chip-tuned and it still worked! I’m getting very excited about this aspect of the game because it is what made up for what the lack of unlockables…well…LACKED!

It’s almost as if I can’t put into words how impressed I am with the way this game looks and sounds, the use of 3D was incredible, this game utilises the 3D capabilities of the 3DS better than a great deal of titles out there but I never doubted that it would look bad, we’re talking about a WayForward game here, none of their titles look bad on the 3DS. I would say that this game is beaten only by games like Phoenix Wright: Dual Destinies and Pokemon X and Y when it comes to how well it looks on the 3DS. WayForward have proves to us that sprites are not extinct, they’re timeless and, if done correctly, make for a better looking game in some cases. The music complemented the style of the game the whole way through and I honestly couldn’t have imagined it any other way. Perfect. Just perfect. 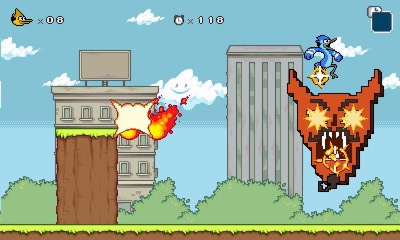 Overall
I’m going to be frank with you all; the game is fantastic as it is, it honestly is a great game that I’ll be playing even after this review. It’s fun, it’s challenging, it looks great and it’s main characters are Mordecai and Rigby! Yes, it can get frustrating and yes it can get a little mundane but I don’t think that is enough to totally disregard the title entirely. It did bum me out to have no worthwhile unlockables or collectables and I’ve said that straight out but it does make up for it’s lack of extra content with its beautiful visuals and it’s fantastic soundtrack.

Truly this is a game for fans of the series and I really wouldn’t recommend this to just anyone because they will find even more faults with it. If you’re a fan of Regular Show, pick this game up! You’ll love seeing Mordecai and Rigby in-game and, really, this game is for the fans rather than anyone else which is why I believe I stuck with it all the way until the end. Great fun, quirky aesthetics, catchy soundtrack, it just needed that little bit extra to be a perfect title.