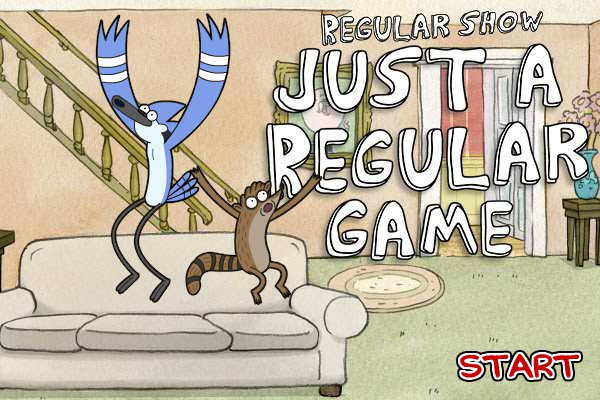 Overview:
Regular Show is one of those absurdist humor shows that has been popular in recent years.  A rag tag cast of characters that can have any type of adventure, that despite its name might indicate, is anything but regular.  So, what exactly can be made out of a show like this?  Pretty much anything, actually.  The question really comes down to if the game is worth spending the time, as that is about the only thing it will cost.

Story:
Regular Show: Just a Regular Game is actually based in part off of parts of two different episodes of the show.  But, that really only provides the idea for what to do in the game as the story is completely straight forward and presented to the player in the instructions/introduction of each section of the game. 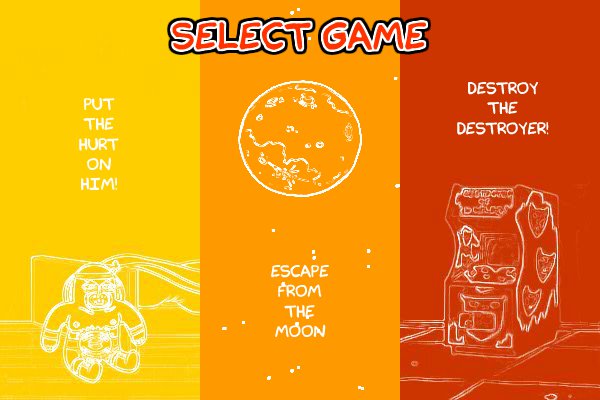 The first part of the game, “Put the Hurt on Him!”, is based off the idea of bouncing Rigby off a trampoline as seen in “The Power”. Of all the parts this is the smallest of all the stories in the entire game, as the goal is to attack Beef Burrito to get revenge for saying bad things about Rigby’s mom and simply ends when the timer expires.

The second part, “Escape From the Moon”, is also based off of “The Power” and features multiple characters all riding in a golf cart to escape the Moon Monster.  This part actually has a resolution if players can make it past all eight stages, which can be a little confusing if players haven’t seen the episode to know that a keyboard was the MacGuffin, but given the nature of the show isn’t really anything a fan might not accept.

The final part, “Destroy the Destroyer!”, comes from the episode “Just Set Up the Chairs” and features Rigby and Mordecai fighting the aforementioned Destroyer, until help can arrive.  Of all the plots this one is probably the best as it has the most satisfying conclusion of them all, but that isn’t really saying much. 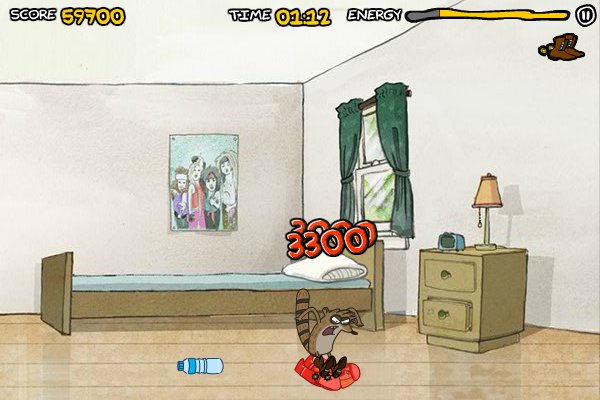 Gameplay:
Each part of the game features a very different style of gameplay, of which the only connecting attribute is being completely controlled via the mouse.  “Put the Hurt on Him!”, has the mouse dragging the trampoline into the right position to hit Beef Burrito, clicking on Mordecai to throw Rigby, and seeing if Rigby does impact.  There is a time limit to keep the game from going too long, as well as an energy bar, but that takes almost to long to run out against the clock.  Getting combos allows Rigby to pick up extra items to attack with and get more points, but missing will forfeit these items.  This takes a little bit getting used to establish the best placement throughout the room, but the game is a bit forgiving, so generally isn’t overly difficult.

“Escape From the Moon” features the mouse controlling the golf cart’s position on the screen and clicking to jump over obstacles.  With eight stages it is the lengthiest of all the parts of the game, and even includes a suitable difficulty curve as the part progresses.  The golf cart must jump over holes, crashed ships, and boulders, but jump into items and UFOs to crash them for points, while also avoiding the slamming fist of the Moon Monster.  The game is forgiving enough at least to provide 99 lives to aid in making it all the way through stage eight though , so players it’s more of a matter of time getting a good run through each stage though could understandably be too tough for some. 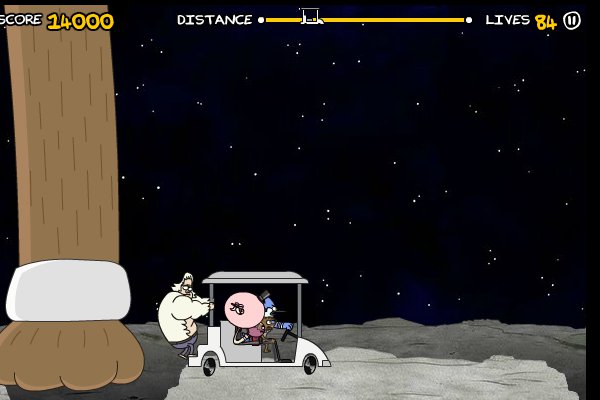 “Destroy the Destroyer!” has the player using the mouse to aim at where to throw objects at the Destroyer and clicking to actually throw them.  It also has a second stage once help has arrived for Mordecai and Rigby, where players control a giant conglomeration of arcade video games by using the mouse to aim auto-fired attacks at the Destroyer.  The first stage has two special attacks that randomly drop, bananas and grenades, where bananas are thrown in bunches of three that split and can even hit more than one spot at a time and grenades are simply more powerful.  After getting distances and timing down this isn’t too hard and for the most part is only really time consuming.

Audio & Visuals:
The music and visuals fit the show about as perfectly as a flash game can.  Each part of the game does feature its own music and fits within the tone of the part itself, from the frantic escaping of the moon to the epic fighting of the Destroyer.  Voice acting is pretty minimal, only really being clips from the show itself and nothing for anything other than quick bursts that players would simply be expecting sounds for.  The visuals of the game follow the art style of the show completely, which isn’t hard as cartoons are fairly easy to convert into flash.  The only real downside to the visuals is that there does seem to be a lock of assets, but there are enough to be satisfying, just more might have been able to be done. 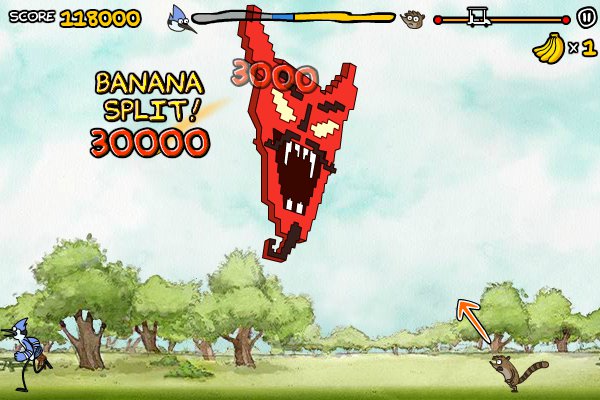 Overall:
Regular Show: Just a Regular Game is interesting and certainly has a good chance of having something players might be interested in.  It goes more of a shotgun route to game content by providing several different experiences, though none are necessarily overly fun however.  It’s a solid time waster, all the different parts at least give the impression of accomplishing something, though it doesn’t really offer anything lasting.  Fans of the show would probably get the most out of it as a way of reliving those small aspects of the two episodes or a means to spend more time around the shows characters.