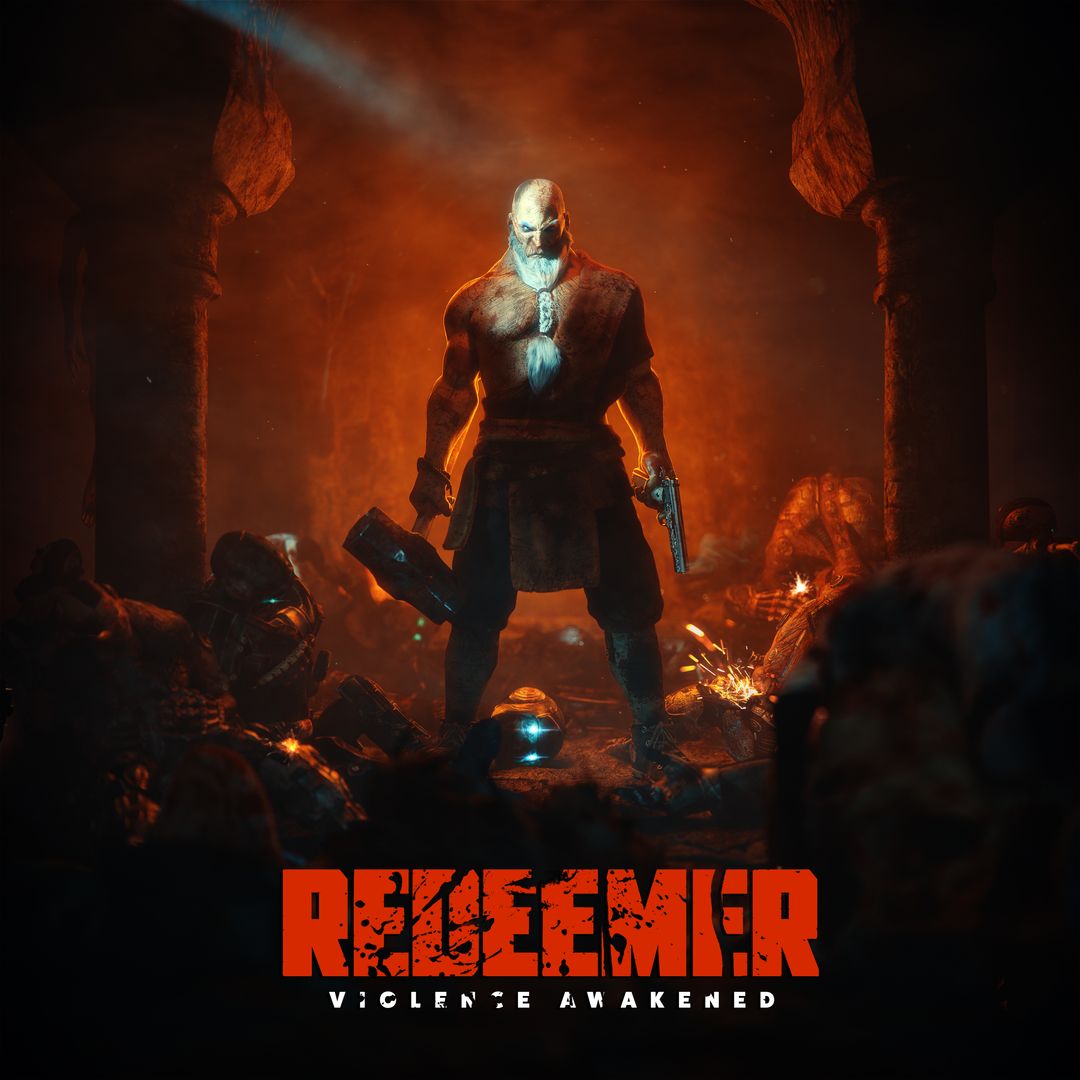 Redeemer is a top down brawler starring Vasily, a former elite mercenary who has turned away from his blood-soaked career in favour of meditation at a monastery at the top of a mountain. Vasily’s peaceful quest for balance in his life is shattered when the monastery is attacked by the cybernetics weapons manufacturer he once worked for who is now bent on bringing Vasily back in the fold. Players will help Vasily battle his way back to redemption by punching, kicking, and shooting his way through hordes of enemies both human and previously human.

Redeemer’s story sounds very much like it came from a cheesy film. The premise is shallow, but is just enough of an excuse for our hero to kick some serious ass. The plot lurches along, jumping from place to place in fits and starts. The story is difficult to follow as major plot points are introduced from nowhere and things are generally poorly explained. The writer seems to be trying to make an effort to create a serious story for Vasily, but they end up falling into well worn tropes and terrible one liners. The dialogue is ranges from decent to downright awful. The script for enemy units seems to have missed the attention of an editor who speaks English fluently as some lines are simply nonsensical. Additionally, enemy units could have used several extra lines of dialogue as it seems like each unit has two lines that gets repeated ad nauseum. 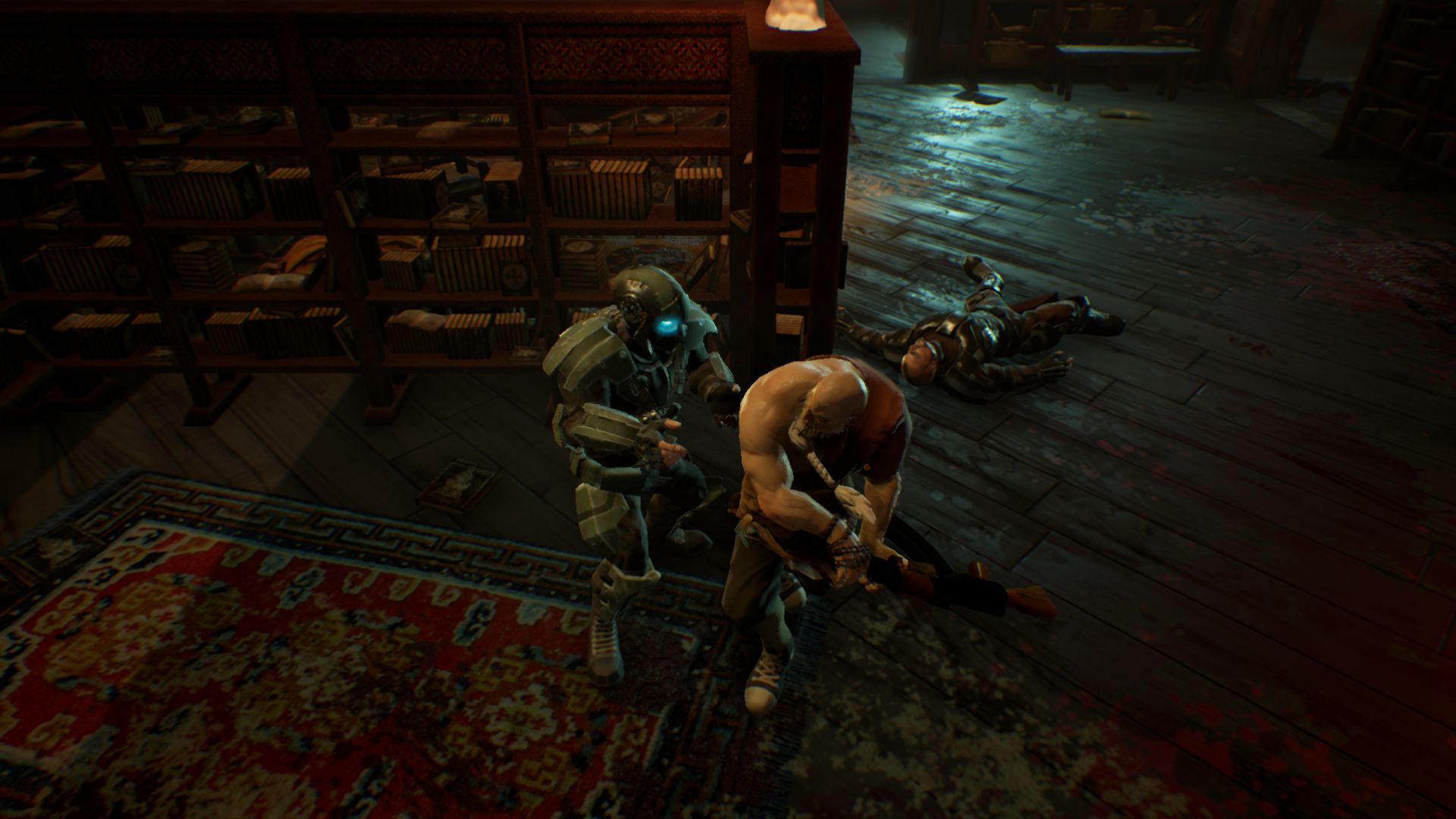 Redeemer is a top down brawler with some elements of a top down shooter. Vasily can punch, kick, and disarm his opponents. He can also counter parry enemy attacks, do stealth kills, use both ranged and melee weapons, and perform executions on weakened enemies and those near environmental traps. Enemies consists of a mixture of humans and mutants. Each tier of unit has its own special attack or ability. Human units also can come armed with a variety of weapons that can be either disarmed or picked up from the ground for later use. Mutants on the other hand can have their limbs ripped from their sockets and used as a melee weapon.

Redeemer’s melee combat reminds me a bit of the Batman Arkham franchise due to its heavy use of the counter mechanic. Vasily’s health only regenerates to the first 25% and enemies hit hard, thus players will need to counter, dodge, and block most of the incoming damage if they plan on surviving. Much like Arkham, an attacking enemy will flash red to signal players that its time to counter. Upon counter, Vasily will immediately stop whatever he is doing and counter the incoming attack. Between the combination attacks of punches and kicks, players can create a reasonably smooth flow of melee combat. 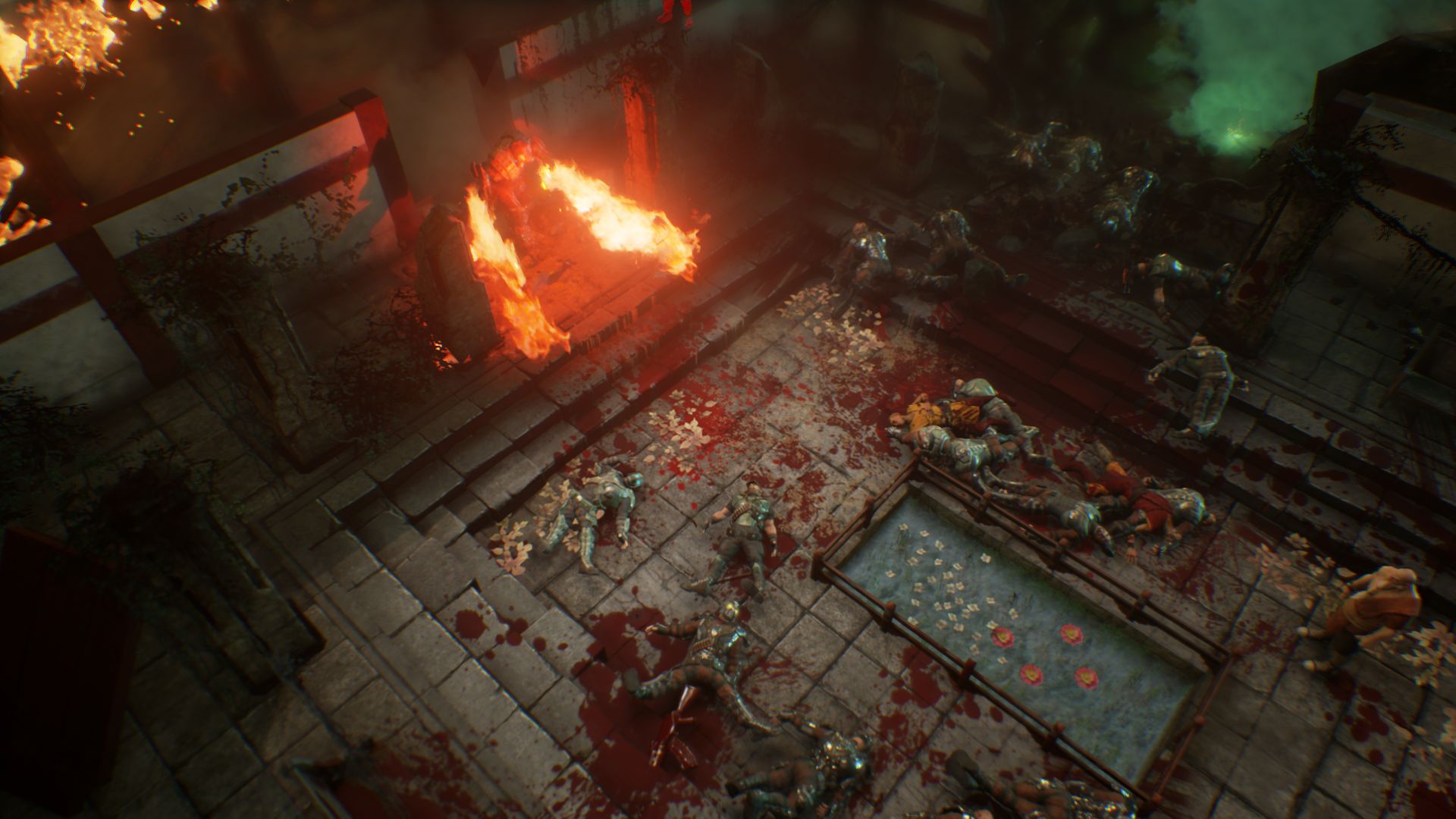 Things fall a bit flat when ranged weapons come into play. For the exception of the pistol, the ranged weapons are quite overpowered. Firearms heavy levels end up becoming a tedious game of leapfrog where player shoots down enemies with the biggest gun, grabs their weapon, and jumps to the next pack. Trying to engage these packs in melee combat by disarming and then brawling simply takes too much time and health.

The controls are okay. I found the game responded very well, which made countering incoming attacks feel natural. On the other hand, I am not a huge fan of the game’s control scheme as it feels very bloated. The disarm/pick up/use button probably could have been coupled with the throw item/execute button to cut down on the number of buttons players need to reach for. To disarm an enemy with a weapon, players have to be in firearms mode to trigger the disarm, which breaks up the flow of melee combat. Heavy attacks feel utterly pointless for the most part due to how long they need to be charged up. To make it all worse, the controller only has one layout. Mouse and keyboard users are a little luckier and can bind keys freely.

The checkpoint system was a minor irritation for me. The game has checkpoints in each level, but each checkpoint is temporary. If the player accidentally exits to menu upon death and tries to return to the level, they are sent back to the beginning of the level. There is no warning or prompt about losing progress. Considering there are only two options in the death menu, I did accidentally find my way back to the main menu a couple of times while button mashing a little too furiously. 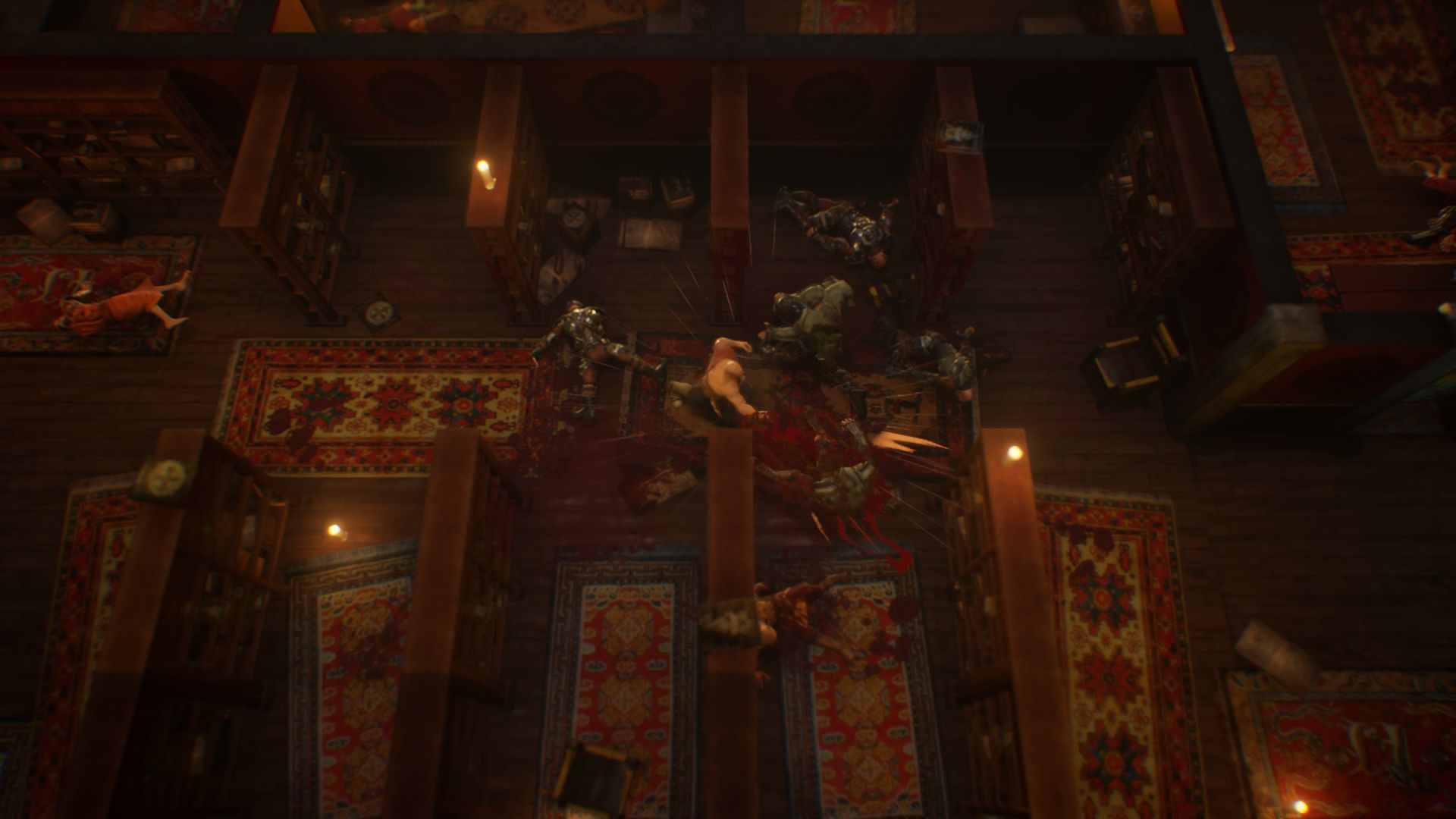 Redeemer’s gameplay is overall pretty dull. The boss fights are uninspired. The stealth mechanics are extremely simple. The level design is linear with a few poorly designed areas. For example, a bridge has destructible railings on one end where it is possible to roll off the edge to Vasily’s death. Another early area has water on the ground which significantly bogs down combat and then compounds the problem by making it a firearms heavy area. The enemy layout is very similar, which makes the game feel very repetitive for the most part. The blocking enemies break the flow of combat as there is no good way to deal with them on the player’s terms besides charging up a heavy attack. A throw or guard break that could be triggered instantly would have gone a long way to solve the problem.

Redeemer’s art style is very nice. The in-game style is a slightly exaggerated style that goes over the top with all the blood and gore. The cutscenes boast a great comic book art style. The textures look good, and the animations are solid. The game’s technical performance is where Redeemer seems to falter a little. Some areas seem to stutter, though the frame rate appears to maintain a steady pace. Also, the game appears to be capped at 60 FPS. It isn’t the dreaded 30 FPS cap, but no cap at all is always preferable. 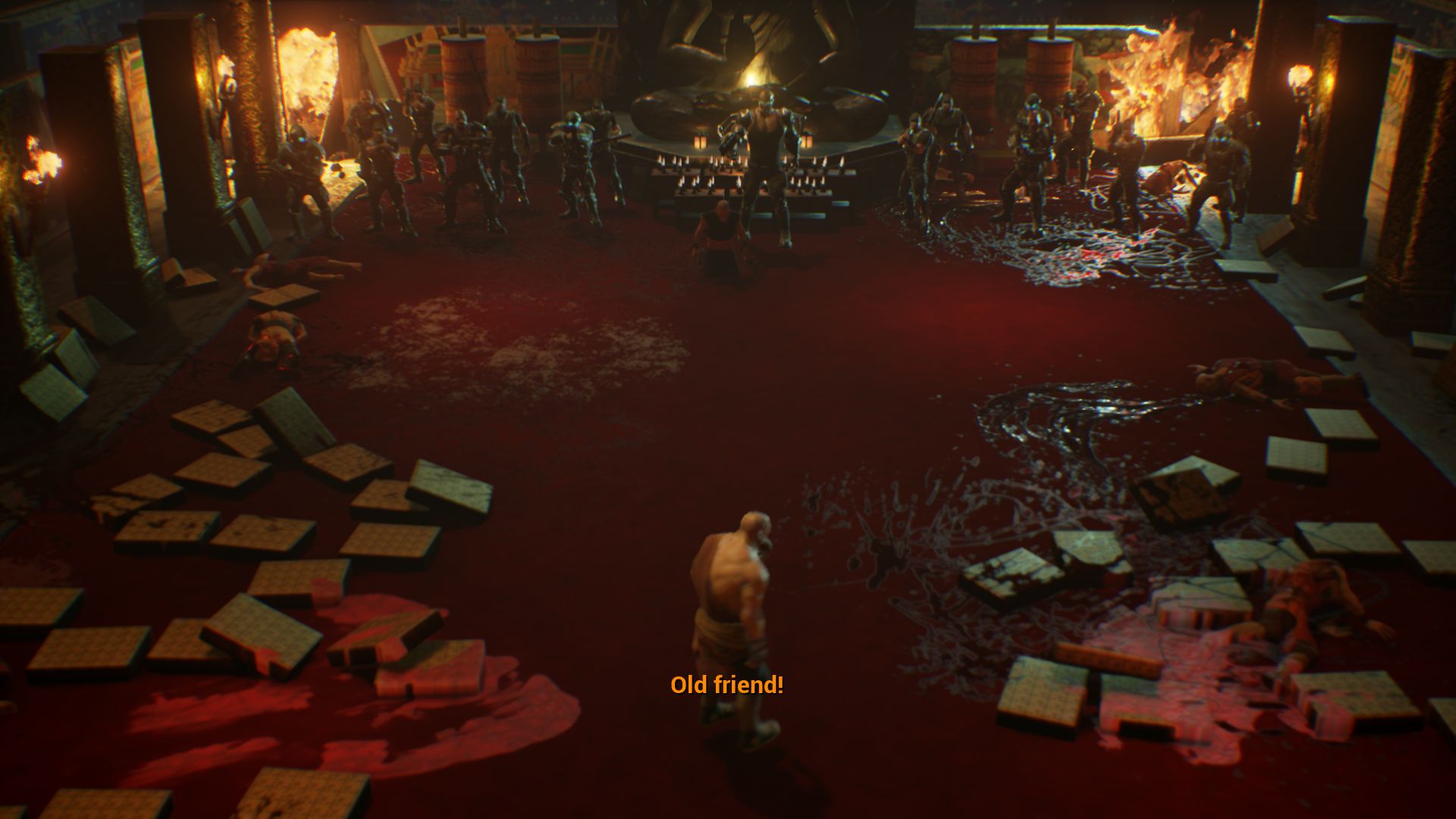 Redeemer features an average audio experience. The sound effects are good. The soundtrack is decent, if a bit generic. The voice acting is a bit of a mixed bag. Vasily’s voice actor does a good enough job, but the actors who play the enemies are just downright awful.

Redeemer is a pretty dull brawler at the end of the day. The story is poorly written, and the dialogue is downright awful. The audio/visual presentation is decent by and large, but the controls could have been tightened up a bit. Fans of top down brawlers might enjoy its Arkham-esque gameplay, but it’s repetitive gameplay and overpowered firearms makes it hard to recommend to most gamers.

A dull and repetitive brawler that channels a little bit of the Batman Arkham games
5.5