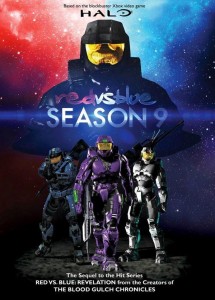 Red vs. Blue is the poster child of Internet success stories, owing to its creative use of the emerging machinima medium and its snappy writing. Over the years though, it’s drifted away from half of that equation – the writing is as funny and clever as ever, but as more traditional animation methods are employed to present these stories, some of the charm that permeated the original Blood Gulch Chronicles is missing from the latest instalment.

The transition has been gradual over the last few seasons, but season nine is where the change is most pronounced. The divide is right down the middle: half is done in machinima, using the Halo: Reach engine to tell the story of Church and Tex in the capture unit’s virtual world, after the events of season eight. The other half is entirely CGI animation, and acts as a prequel to the whole series, detailing Project Freelancer and the creation of the AI units.

But for all the flashiness and epic scale of the animated prequel, in the end the simpler character story, the classic machinima charm and the parallels to the Blood Gulch saga, make the sequel story the stronger aspect of the season.

As Rooster Teeth’s popularity exploded, their visuals followed suit, and the capacity for telling stories grew proportionately. They could do things they never could with straight-up machinima, but it’s always grounded in the same style.

As I’ve already mentioned, season nine’s story is divided into two parts. The Church story has him arrive in a familiar Red base/Blue base setup, but things are a little off with the Red team. Donut’s in charge, Sarge is a good listener, and Grif is productive and efficient.

The Red vs. Blue turf war is more pointless than ever, as the land is rocked by a series of strange earthquakes, and Church tries to find Tex to figure out what they need to do in this virtual world.

Meanwhile (well, many years earlier), the agents of Project Freelancer undertake various missions of espionage, beat up countless faceless soldiers, and all sorts of spy clichés. It feels more like an excuse to show off the awesome new animation, with hand-to-hand fights, car chases and ‘splosions aplenty. Don’t get me wrong, it all looks really good, but it feels somewhat shallow. Personally, I kinda got sick of the whole AI story seasons ago, but I can see the need for a larger narrative context for the hapless soldiers to battle and bicker in.

Cut together, the two stories complement each other fairly well, with their different tones and styles of animation. The Freelancer bits are almost non-stop action, done seriously with a light sprinkling of humour. The machinima bits are the exact opposite.

All up, it’s an exciting and satisfying package (bow chika wow wow) that paves the way for an intriguing tenth season.

I might have been a bit hard on the prequel story, but I need to stress how incredible it looks. Even when they aren’t doing fly kicks and cartwheels, the characters have more fluid movement and feel more natural, thanks to the motion-capture tech.

But obviously, the highlights are the massive and exciting action sequences, far beyond what’s seen in previous seasons. They couldn’t really do fifty-person brawls before, or car chases, or dynamic gunfights. Now that they can, it may be slightly overdone, but it’s executed well enough to distract you from caring.

It’s “shot” and edited in a more cinematic fashion, and surprisingly well done. Particularly noteworthy is the epic highway scene, as the camera spins around to keep up with the action across several vehicles without cutting. It would be an impressive scene in any medium, and serves to highlight how far the series, and the team, have progressed over the years.

That’s not to discount the look of the concurrent machinima scenes though. By its nature it’s more rigid, but much of the appeal is in the creativity employed to overcome the style’s limitations. That, and the fantastic characters we’ve grown to love. They help.

While the sound in the first few seasons was quite rough, it has improved to studio quality, and the addition of professional actors to provide the voices of other characters was a wise decision. The voices of the Director and the Counsellor are particularly distinct.

Music-wise, Trocadero’s mark is still present, particularly in the machinima sections. Project Freelancer seems to have its own musical style, with varying success.

Continuing Rooster Teeth’s tradition of generosity with bonus features, season nine includes a metric ton of special videos, deleted scenes, outtakes and behind the scenes stuff. There’s even a second disc containing a six-part Grifball saga, but I suspect that different members of the team worked on that: it lacks the humour and polish of everything else.

That one little stumble aside, the rest of the extras complement the main feature quite well. The special videos, including some PSAs, are fantastic, bite-sized samples of the main series’ wit. If ever you’re trying to show someone RvB for the first time, these PSAs are a perfect place to start. In particular, the Halo: Reach campaign montage, dubbed with Caboose’s voice, is utter hilarity.

If you’re interested in how it all comes together – and you really should be, it’s fascinating stuff – there’s a lot of behind the scenes features to clue you in. It details how character and environment assets from the Halo: Reach engine are used in CGI animation, as well as the more traditional live-action filmmaking techniques used in machinima.

The series has grown healthily through the years, and season nine is by far the biggest, but I’m reluctant to call it the best. It’s the imperfections of machinima, and how these can be overcome, that make it such an interesting medium. Moving further into plain old animation may make it look better, but some of the magic is sacrificed in the process.