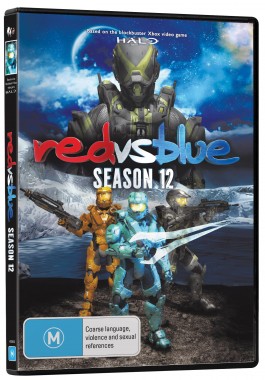 Red Vs Blue and RoosterTeeth are two phrases that are essentially synonymous with the Machinama media genre. What started out with a bunch of lay-about soldiers just standing around and talking in the middle of a boxed canyon has evolved into a massive internet phenomenon, now spanning 12 seasons. Kind of shocking when you consider that, to this day, they’re still lay-about soldiers who do almost nothing but stand around and talk, and drive each other nuts with often hilarious results. It’s usually around this 12th season point in a series’ lifecycle when fans start to ponder as to whether the show starts running TOO long. Like the previous seasons, Red Vs Blue Season 12 has also made its way to DVD. The big question to ask is, does RvB still hold up after all this time? 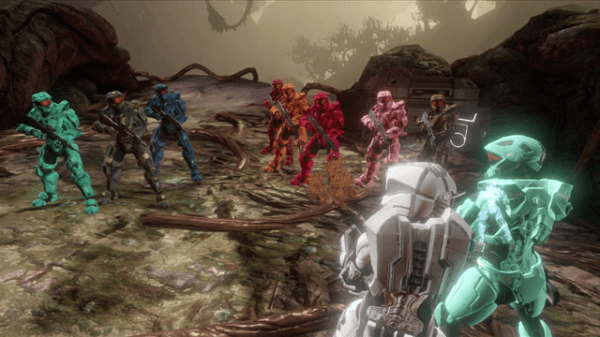 The plot of season 12 pretty much picks up straight from where season 11 left off, give or take a few months of in-context time. After the (literally) explosive finale of season 11, the Reds and Blues have been separated, and are now heavily caught up in a civil war for the planet Chorus. (The planet they crash landed on in the last season). After meeting with a mercenary named Felix in the last season, Tucker, Caboose, Grif and Simmons have been drafted into the rebellion, with the promise of the chance to help rescue their comrades from the Federal Army. It seems that all the wrong (or right) reputations of the wayward heroes have preceded them, as they are considered by many of their fellow rebel soldiers to be living legends, as the soldiers who brought down Project Freelancer in earlier seasons. Symbols of strength and hope. Beacons of light in the darkness and all that…

As any long time viewer would know, this notion is obviously a completely inaccurate representation of this little band’s abilities. However, as a result of this rather inexplicable fame, each of the four are promoted to the rank of Captain, and given their own squads to train and manage. As Grif put it “Prepare to be sorely disappointed”. 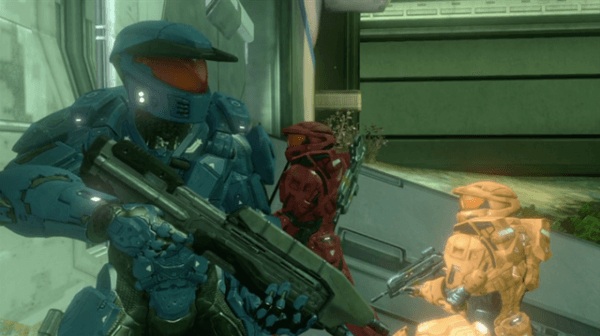 One of the hit-and-miss aspects of the “Idiots-in-command” is the relationship each of the main characters share with their protégés. Tucker’s apprentice is an inept suck-up; Grif’s number 2 is equally as lazy and uninspired as he is; Simmons’ understudy is, well… female, which is a problem to a guy who has serious difficulties in talking to ladies; and Caboose’s  underling seems to think his captain some sort of ingenious and respectable military mastermind. The relationships Tucker, Grif and Simmons share with their squads are not particularly funny or interesting, mostly because these second fiddle characters are exactly that, second fiddles. The only instance where it works humorously is in Caboose’s case. Even so, viewers will find it a little difficult to care about these characters in earnest.

In season 12, focus is thrust upon Tucker as the main character. (He is the lead character on the box art cover after all.) Without any sign of Washington, Church or even Sarge around to provide guidance and leadership, Tucker ultimately takes it upon himself to lead the others in their mission to recover their friends by doing what they do worst: working hard. Tucker’s character development and growth as a legitimate soldier in this season is quite appealing to see, especially since the focus of previous seasons have almost exclusively been upon Church. (And they let the viewers know this through numerous in-jokes about that older focus). 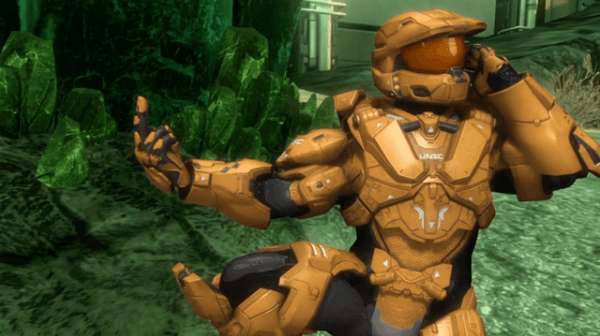 A small collection of old faces also return at around the halfway point in the season, just when the whole civil war starts to go really pear shaped. We’re also introduced to a few new characters who I sincerely hope will become regulars in the series, such as Doctor Grey, a borderline psychopathic doctor who is significantly more entertaining than the old Reds and Blues medic. Her cheery demeanor in the face of extraordinary hostility kept things light hearted and solicited some genuine laughing out loud moments in some of the story’s darkest moments.

The shifting story focus from soldiers doing nothing, to soldiers actually doing something heroic in this season is certainly a departure from what RvB has done in the past. The plot continues the saga set up by season 11 quite nicely and is still a greatly entertaining story to watch. It’s still rampant with in-jokes and popular culture references that long time fans know and love, yet it does just enough new to keep the audience invested in watching even after all this time. In particular, the conclusion of this season gives the audience and pretty good idea of where season 13 will take us. And I for one, can’t wait to see it. 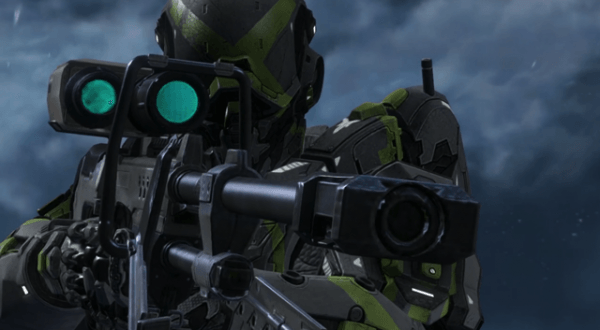 As with Season 11, Season 12 is filmed in the HD graphics engine of Halo 4. The RoosterTeeth crew still know how to stick to the visual roots of the series, while making the best use of out the in-game customization tools to fashion environments, background elements and camera angles to their liking. The animation is still about what you’d expect from RedVsBlue. There is a lot more environment variance this time around as the Reds and Blues find themselves traversing a large variety of locations across Chorus in an effort to.

One significant change worth noting compared to the last season is the return of CGI action sequences, where certain segments of the show are filmed with custom made CGI instead of the standard in-game machinama style alone. These custom animated scenes were always a glorious highlight in previous seasons, particularly in season’s 8-10, and were noticeably absent in season 11. However, don’t expect the action sequences to be as wild and over the top as they were in previous seasons. Many CGI animated scenes aren’t even action-based at all. Instead the focus is on conveyance of emotion through action, since everybody in this series has their face perpetually hidden by a helmet.

While the general dialogue scenes benefit greatly from the CGI treatment, the combat scenes with it aren’t up to the same standard as they were with previous seasons. CGI is used in action scenes quite sparingly, and even then most of it appears stiff and less epic. Don’t expect “Agent-Carolina-Jumping-Off-a-Building” levels of style this time around. Don’t get me wrong, it’s still fun to see, but just doesn’t deliver the same level of “OMPH” as before. 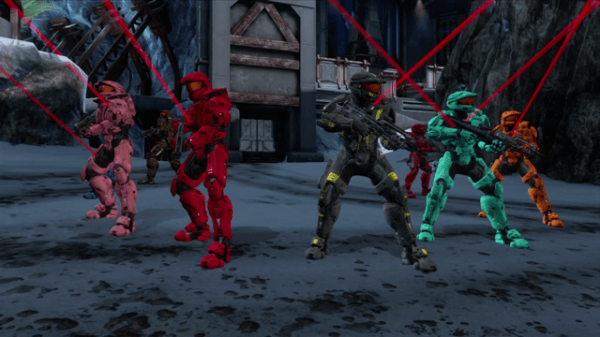 The audio style of season 12 is very much keeping in step with the standard of sound and music quality in season 11. Nico Audy-Rowland contributes some very nice musical scores to accompany the situations and environments. The RoosterTeeth crew have also done a bang-up job of using the limited sound toolset available in Halo 4 wherever they can, using in-game sound effects wherever they can, just to instill that sense of “Hey! Remember we’re still in a Halo game!”

The character voice acting is still up to the usual stellar RvB standard with familiar Roosterteeth members making up members of the main cast, with lots of minor voice roles handed out for many supporting characters. The delivery of jokes are still quick and witty, though there are moment when a joke’s completely obvious punchline is coming, BOW CHIKA BOW WOW. It says a lot about the quality of voice acting at hand when you have to convey thoughts and feelings through something without a face, but everyone pulls it off quite nicely. 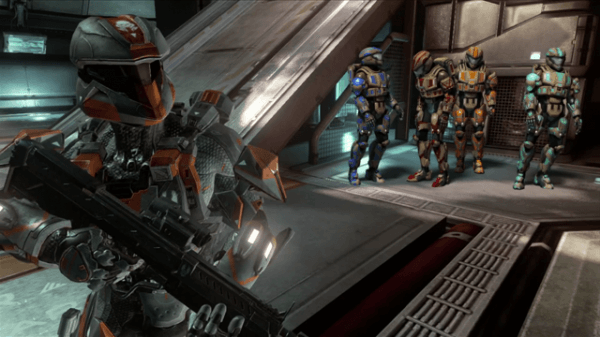 As will all previous RvB DVD releases, Season 12 comes stacked with a slew of bonus feature content, including 4 more of RvB’s ever entertaining PSA videos. Also included are the Audio commentary reel  from the cast and crew, a blooper reel of some of the bigger gaffed moments of RvB, a few deleted scenes and Teaser Trailers for other RoosterTeeth productions, such as RWBY volume 2 (soon to be reviewed), Best of RT Shorts, and X-Ray and Vav. It’s also very cool to see a few little self-referential Easter eggs hidden throughout the collection, like soldiers watching an episode of RWBY on the big-screen TV. 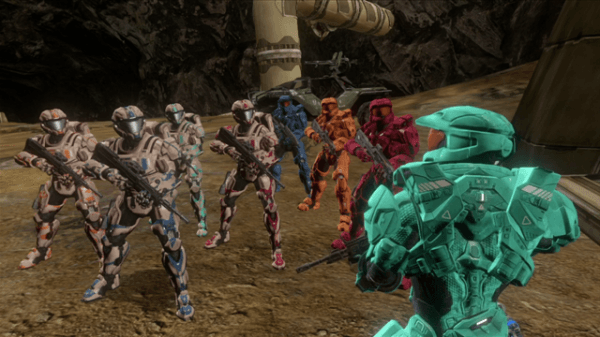 It’s worth noting that this is NOT the place to start watching if you’ve never watched Red Vs Blue before. For many of the jokes, a lot of pre-existing background context is needed to understand. And yet I don’t find a thing wrong with this. It shows RvB isn’t being tailored differently to bring in new audiences; rather it’s sticking too much of the already existing formula fans know and love, and delivers more and more of it. Yet at the same time, much is different this time around. Odds are, if you’re an RvB fan, you’ve already seen most of this online already, but this DVD collection is still a definite fan “must-have” to enjoy those moments of hilarity again and again.