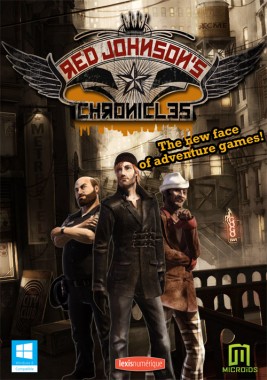 Red Johnson’s Chronicles is an investigative point and click adventure game by Microids, developers of the critically acclaimed Syberia series, as well as Still Life and Jules Verne’s Return to Mysterious Island 2. Having made its way to the PSN in 2011, Chronicles has finally been released on the PC. Is this a simple open-shut case for Red? Or will some further investigation be required? Read on to find out.

Red Johnson is a private investigator in the city of Metropolis; a place where the police are incompetent and crime is rampant. Red finds out about a fresh murder on Drownedman’s Bridge (see, I wouldn’t use that bridge with that name) and arrives on the scene to find one Officer Robert flailing as he languidly observes the crime scene and unconvincingly claims to be in the midst of cracking the case. It’s quickly evident that Red will have to solve this murder case himself. The victim was shot, his lifeless body proceeding to fall into the canal. Red soon discovers the identity of the victim – Eddy Lexter.

Lexter was a common crook, but now it was time for Red to figure out who would want him dead and why. Along the way to solving the mystery, Red meets some colourful characters, such as Eddy’s non-grieving, abrasive widow Theresa Mitchelli, a homeless man living under the bridge named Ringo, hair-lipped gang boss Carlos Montoya and street-wise escort Sonia Diamonds. The story has those initial moments of intrigue, but plays out very much how you’d expect it to. But it does retain the air of a classic murder-mystery, which is nice. 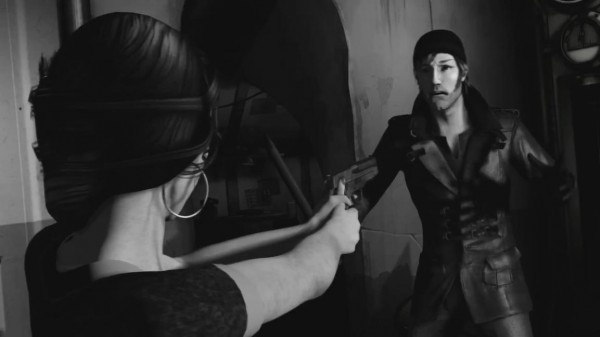 The characters themselves are a mixed bag of realistic and caricatures. Ringo has some of the funnier lines and interactions throughout, being the stereotypical drunk, homeless man who’s maybe got a few screws loose. Theresa is the most grounded character, with Carlos and Sonia’s dialogue being slightly cheesy and typically derivative of their individual character types and Officer Robert being an exaggeration of the reputation of small-time police as lazy and incompetent. But, these personalities are all based on real-life observations and perceptions, so there is an established level of familiarity there.

Red Johnson’s Chronicles has the rare distinction of being a point-and-click title that was first released on consoles, not PCs. So the controls have been adapted from an originally controller-based layout. However, you’d think that it would be a simple transition given the genre and its history of great, well-established gameplay mechanics and design for the PC. But, for some reason, the developer have taken the long route to doing everything in-game, making practically no use of the mouse’s right button or scroll wheel, and instead forcing you to unnaturally swap to using the keyboard in their stead.

Instead of simply being able to scroll down a list, you have to use the arrow keys. In some instances, instead of simply pressing the left mouse button to select, you have to press the enter key. You want to move across tabs in Red’s investigation folder, use the blacklight when looking for fingerprints or zoom-in when looking at an object? Forget the unassigned right mouse button! You must use the V, B and N keys! The only necessary use of the keyboard should be to bring up your journal/notebook, but otherwise, it’s frankly a very counter-intuitive layout that makes no sense to me. In fact, the gameplay is where Red Johnson’s Chronicles fails most. 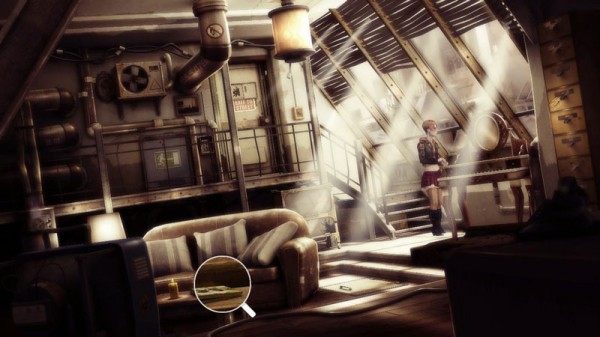 It could have been alleviated with alternate layout options (like most games these days), but there are no such settings, which are very bare and relate only to the audio department. It felt like they were just trying to feign depth of gameplay, but in a point-and-click title, we know what to expect and accept that it’s primarily mouse-controlled…and there’s good reason for that. At other times, they give you more options than necessary too. For instance, if Red has 4 screws to remove from a panel, you are given the option to choose which order you want to remove them in, but order has no effect. Either way, the screws are coming out. It’s an illusion of choice that just isn’t required.

Speaking of puzzles, they are truly the highlight of the experience. They are clever “thinkers”, not “tinkers”. That is, you have to really use your brain in order to successfully complete them, and not just apply every possible part, piece or solution until something fits. Because of their difficulty, however, a hint system is present. This comes in form of advice from your friend Saul, a fly, hip “playa” character (gamer pun!) who you meet early on in the game. He, of course, doesn’t work for free. Every clue is going to cost you $100. You earn cash by passing a conversation or puzzle, with variations depending on your speed and amount of tries it takes you. 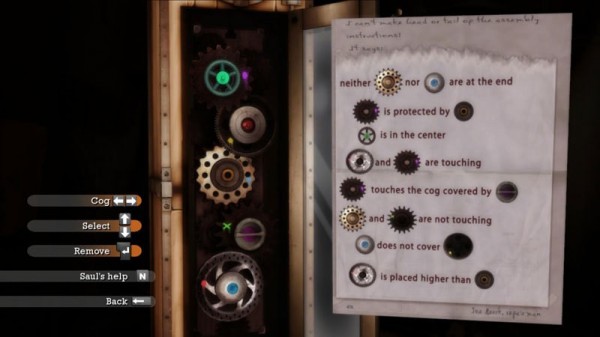 There are a few issues with this system. Firstly, you earn way too much dough over the course of the game, which has no other use, so you will always be able to afford to ask for help. You are basically encouraged to seek aid. I would have liked having to weigh up the advantages/probable disadvantages if I were stuck, had very little cash left, and thought to reserve my supply for future, presumably harder puzzles. A simple thing that could have been tweaked would be making each consecutive clue in a single puzzle more costly, because each one is at a flat price of $100.

Also, the clues themselves are often useless. Sometimes Saul would be absolutely redundant in his stating of the obvious. I know ‘I have to look at the design on this box, but what exactly am I looking for!!!’ …Sorry, rage flashback. Another annoyance is the conversation mechanic. Say you are given three dialogue options; one is correct, two are not (with one being utterly ludicrous). If I want to hear the conversation take a funny turn and choose the ridiculous answer, the conversation gets cut short and you “fail” the scenario, instead of continuing on with maybe a hit to your purse. You have to replay that conversation again. It’s not fluid and is very constrictive.

The visuals, much like the story, are loosely inspired by film noir, but features more modern characters types. There are lots of brown hues, with the game transitioning to that classic film noir black and white for certain cutscenes and all quicktime/action events. It’s a nice touch, although character animations are quite stiff in those scenes. Seeing as the majority of the game is purely point and click gameplay from a 1st-person perspective, it’s understandable that less time would be allocated in development to the animations. 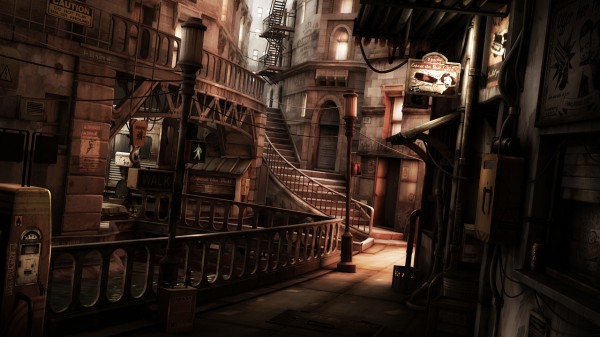 I think it’s a bit too transparent that Metropolis is actually planned-out like a nuclear warning sign. However, the 6 settings/environments that you interact within are well designed. Again, there are lots of earthy and somewhat muted tones, and when some brighter colours are used, it’s a welcome artistic flair that gives character to the world. The character designs are also an extension of the city’s personality, although Saul does stand out amongst the crowd, which I think is necessary to prevent absolutely everything from blending together and losing any individual flavour.

The music in Red Johnson’s Chronicles basically consists of one main theme, a dedicated theme for Saul and an audio cue that loops during the aforementioned quicktime/action events. The main theme is fine, and the Saul theme is funky and jovial, much like the character. The quicktime/action event cue, however, isn’t as effective and fitting, not because of its sound, but because it stops with every visual input cue, and then loops over until the next. The input cues come fast and steady, so the loop constantly breaks at an aurally jarring and displeasing point. 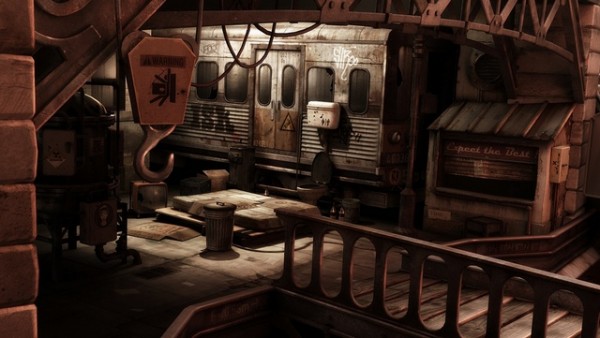 The sounds of Metropolis are mostly subtle, and the fact that there’s not a presence of loud ambience gives a better sense that the city is crime-filled and dangerous…almost like the expression “it’s too quiet”, referring to a deceivingly calm locale. No one would be leisurely walking these corrupt streets. The voice acting is much less subtle. Overall, it’s pretty mediocre, with the rare glaring mispronunciation that would likely be explained as a product of characters’ accents. But, I don’t think an accent can excuse “re-nigg-ing” (reneging) and “who’d-lums” (hoodlums).

Red Johnson’s Chronicles has some great qualities, especially in the puzzles department. However, it’s plagued by completely nonsensical controls and secondary game design elements. The controls wouldn’t be an issue if there were customisable options in the settings menu. They, along with some other details, irritate and pull you out of the immersion. It’s disappointing because the fundamentals are there, but the execution has not been nailed. The puzzles may just override these issues for some, but for me, it may just be case closed…We will be reviewing the sequel, ‘One Against All’, and if it is a marked improvement, Red Johnson’s Chronicles may just be worth buying in the bundle pack.