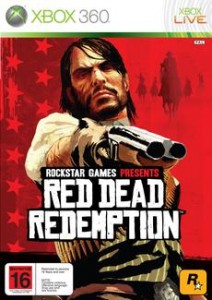 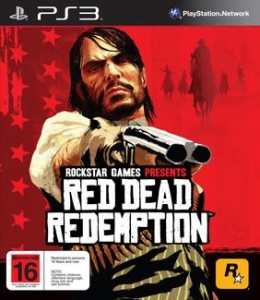 Where do you start when you attempt to review a monumental game like Red Dead Redemption? Full disclosure up front: I am not a massive student of the Western genre. The most extensive exposure I’ve had to the common archetypes and tropes of the genre would be three seasons of HBO’s “Deadwood”. So with memories of the characters and settings of that show fresh in my mind I dived into the game expecting GTA4-meets-the-Wild-West, and on a simplistic level you could say that Red Dead Redemption delivers exactly that. Yes, Red Dead Redemption is a sandbox-style game. Yes, you play as a mysterious character with a good heart who lives by a moral code, running from a violent past that jeopardises his plans for the future. Yes, there’s prostitutes. When you take away the superficial similarities however, what you are left with is something deeper and more resonant than anything Rockstar have ever released before.

In Red Dead Redemption the player takes control of the protagonist John Marston, a man with a violent past (and the scars to prove it) who is strong-armed by the government into travelling to New Austin to bring the remaining members of his old crime gang to justice, all against the backdrop of a changing America around the turn of the century. I truly believe that a lot of the magic of the game comes from experiencing the twists and turns of the storyline yourself, so I will keep the rest of the plot spoiler-free and only say that RDR is packed full of fully-realised three dimensional characters. You’ll meet strong women, twisted psychopaths, Irish gun-runners, snake-oil peddlers, and resolute lawmen (with their equally incompetent deputies). It’s easy to become attached to some of the characters – am I the only person who has an attachment to Charlie the dog? 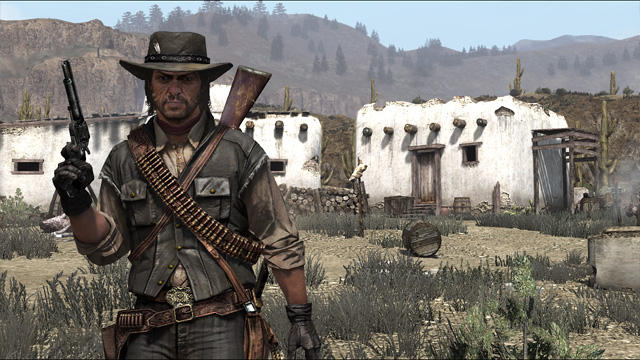 The script is fantastic, and while I don’t think people will be walking around quoting lines from the game, there’s no shortage of clever (and humorous dialogue). Note to parents of impressionable youngsters: Red Dead Redemption features the strong language you have come to expect from this style of game, but even I was surprised (but delighted) to hear several “C-Bombs” being dropped, including two in one cutscene!

Graphically, the vast landscape of New Austin is breathtaking, with locations spanning from mining settlements, ranches, camps, and towns (think “Deadwood”). The areas in between are equally as alive, filled with wildlife such as armadillos and rabbits to the more dangerous cougars and bears. The R.A.G.E engine performs amazingly well in this setting, with no discernible time waiting for landscape elements to appear from fog. I am not sure what Rockstar have done to tweak the engine since GTA4, but whatever they’ve done has paid off. Almost everything in the environment is destructible (or at least damageable), and to be honest I found myself forgoing the option to skip straight to destinations a number of times simply because it’s so damn enjoyable riding your horse from one place to the next and taking in the scenery along the way.

Unlike Liberty City in GTA4, New Austin is not a passive character in the story. With few exceptions, the general citizens of Liberty City are passive robots, there to bring the city alive and for you to carjack and slaughter in any way you see fit. In Red Dead Redemption you will often be stopped by people looking for your help or to rob you. Linger too long on the prairie and you are tempting fate – even the wildlife pose a real threat. Once, as I was slowly creeping up on a criminal with a bounty on his head, a cougar pounced from behind, bringing my horse down with ease. Before I could get a single shot off, three more cougars mauled me and tore me to pieces. I never made that mistake again! 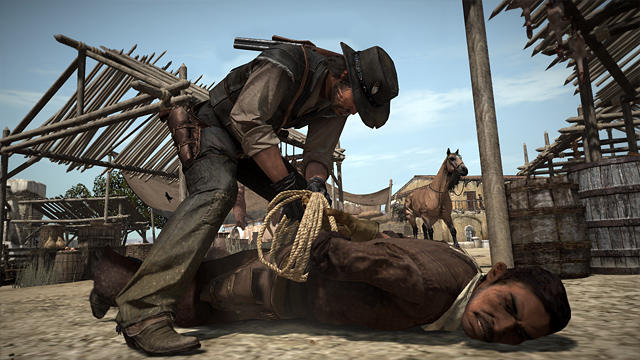 The haunting original soundtrack composed by Bill Elm and Woody Jackson compliments the game perfectly, emphasising the loneliness and solitude of the plains, and kicking into gear when the action on the screen dictates. I love it when the bass kicks in for “Triggernometry” as you near a violent shootout – best “music to kill people by” EVER. The soundtrack is available for purchase on iTunes, and quite frankly I’m tempted to buy it – it’s that good.

Red Dead Redemption offers a massive variety of mini-games and spur of the moment tasks over and above the prescribed storyline missions. A lot of the time you may plan to set off and do one thing and find yourself being interrupted by a passer-by and set off on a whole new course. Players can join poker games to earn some more money, search for buried treasure, participate in races and much, much more. 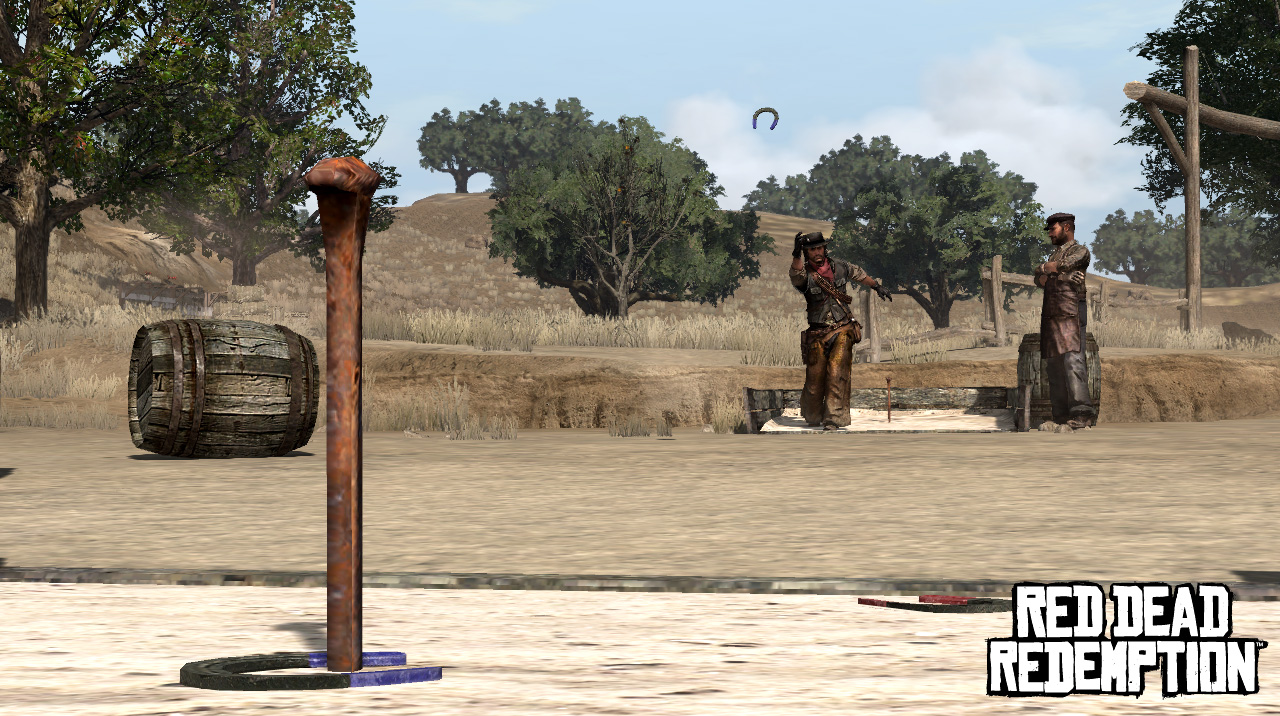 Veterans of the Grand Theft Auto series will feel instantly at home with the controls for Red Dead Redemption. Everything is where you remember it, and I found myself acting instinctively during the early stages of play. The triangle button (or Y button for Xbox360) allows you to ride a horse, and yes, “carjack” a horse or stagecoach as well. On the surface the shooting system works the same way as previous Rockstar games, but Red Dead Redemption adds some welcome tweaks that improves things out of sight.

The main change is the addition of “Dead Eye Mode”, a metered bullet-time mode which works much the same way as implementation in other games (think “Max Payne”), allowing you to slow down the action when things get hectic and selectively (and accurately) target your enemies. There’s also some tweaking to the target locking system – now it feels like you lock on to a target for only a few seconds, and if you don’t take your shot within that short window it reverts to a more manual mode. 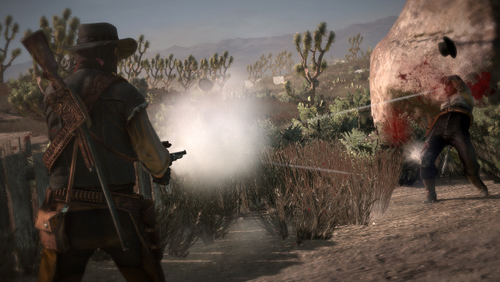 The enemy AI is good, but not great. In some situations you see evidence of the enemy working to outflank you and move up on your position, but with the addition of a much-improved “cover” system it still feels a little easy to hide, wait for your target to raise his head, and then blow it off. Generally speaking, if you are gunned down in this game it is more due to the element of surprise or being caught out in the open than a result of excellent AI. Personally, I found the enemy more dangerous in GTA4 than in Red Dead Redemption, with one exception: cougars. The human AI might be slow, but let me assure you, the cougars are not! Once I found myself attacked by cougars at night (did I say I never made a mistake again where they were concerned?) and I ran as fast as I could, desperate to get away. I saw the flickering light of a campfire in the distance and headed for it, thinking logically that wild animals are scared of fire. IT WORKED. I spent the rest of that night crouched by the fire, keeping the cougars at bay with random shots, with only the sound of their growls to aim at. If that isn’t good animal AI I don’t know what is! 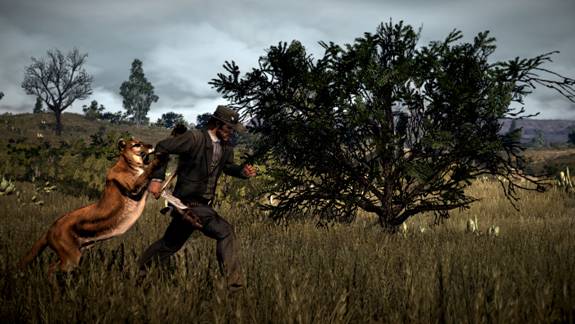 Multiplayer in Red Dead is divided into two modes: the first is “Free roam” which allows you to run around like a crazy man and form a posse with up to eight of your mates or random vagabonds.  If you’re the posse leader you can organize goals for the team and together you can set out to accomplish them.  There are many things you can do such as bounties, hunting wild animals (sort of like going on a hunting trip with your mates but in the comfort of your own home)  and even clearing out bandit-held forts (my personal favourite)  YEEEE HAAAA!!!!  Along with those goals there are plenty of random tasks to do as well as PVP options to sink your teeth into.  As always, setting out to accomplish something with your mates is always more satisfying than doing it on your own, because once it’s all done everyone can shoot their pistola’s in the air in fits of happiness!

The second mode is PVP map-based matches where 16 players can take part in a variety of match types such as “All Shootout” (deathmatch), “Gang Shootout” (team deathmatch), “Hold Your Own” (capture the flag team match), “Grab The Bag” (players all fight for a single bag of gold), and “Goldrush” (deathmatch and grab the bag combined). To win at Goldrush, players need to grab the bags of gold and deposit them into chests to score points, normally the first to 10 wins.

At the beginning of each of these matches there’s a Mexican standoff where everyone starts off in a large circle all pointing their guns at each other, and when the cow bell rings it’s total mayhem with everyone killing one another till there is only one man standing.  That last person standing will get a little extra XP and a great sense of achievement for being the badass of the bunch.  Once that is done the actual multiplayer game will begin and its down to business (watch the video review for more information).

Something Rockstar have added to multiplayer that everyone seems to be doing nowadays is player  EXPERIENCE. XP points are awarded to you when you kill enemies or accomplish tasks in any mode.  This in turn unlocks a truck load of cool things like weapons, clothing, character models and mounts. It’s always great fun taking someone out and watching your experience bar down the bottom grow and reach the next level. There’s always cool stuff unlocked at nearly every level, so it’s a great incentive to keep on shooting.

It is hard to write about Red Dead Redemption without sounding like a gushing fanboy, but honestly the game is that damn good. Never before have I played a game with such an amazing depth in all facets of the production. The graphics (while not perfect) are breathtaking, the scope of the story is massive, and it’s all grounded in a sense of total authenticity supported by the superb voice acting, fantastic script, and immersive soundtrack.

All of that aside, the game is simply FUN, and gives gamers an amazing amount of freedom to play the game in the way they want. Do you want to be a heartless outlaw, killing with impunity? Do it! Do you want to help people out and play the game with honour? Do it! Add to that the variety found in the various mini-games and it all adds up to an incredible achievement by Rockstar, and for me, the odds-on favourite for Game Of The Year.