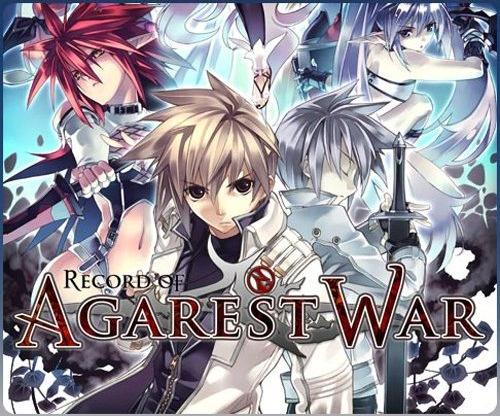 Overview:
Idea Factory has developed quite a unique game when it comes to Record of Agarest War. Now with Aksys being the only company to bring it to American soil. Now the PS3 version is only available for a direct download from the PSN. But don’t let the lack of a retail release fool you. Will it be the suggestive themes that are brought up quite often which will entice you? Or is it the true core of the game as a hardcore SRPG that will attract you to Record of Agarest War.

Story:
As far as plot goes you may have seen a vague similarity between this one and many others. For example the big evil force which has started to arise in the world begins it’s search for the Bracelet of the Covenant. This bracelet contains the evil forces power and will help it in it’s resurrection. However the Bracelet has been hidden for thousands of years, keeping the dark one in check. Until now.

As the story begins, you play as Leonhardt, a famous general in the human army which has begun to move and take over the rest of the continent. That is until an innocent elven girl named Ellis is nearly cut down by his own compatriots. Rather than stand by and watch, Leonhardt fights his own army off and protects her. Though in doing so a mysterious Dark Knight kills him with ease. 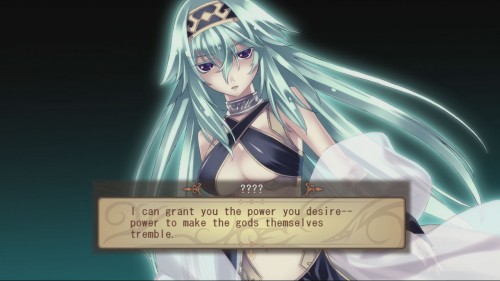 This would be the end to the story. Though Leonhardt sells his soul to bring himself back to life and the power to right the wrongs in the world. This price tag has a catch though. All of his descendants souls are also forfeit to protect the world from the rising evil.

Record of Agarest War’s storyline spans five generations, starting as Leonhardt to his great, great, grandson. You may wonder how this could be? Well that is where the marvelous Soul Breeding system comes into play which will be discussed later. Overall the storyline lasts for a very long time, with well over a hundred total hours of play available and a multitude of various choices and differences to make, you will have the opportunity to play the game differently an extremely large amount of times upon restarting.

Graphics:
As far as the graphics go, there are two sides to the coin here. As you enter a battle you will see your character’s sprite like appearance which is unfortunately very pixelated and a bit fuzzy. They are very detailed however and the weaponry they equip changes with them. On top of that monsters are just as detailed when you fight through them. Another high note is the fact that special attacks are very delightful to see happen, as well as quite devastating.

But for each high there is also a low point. None of the battle terrain will have much variety in the way that it is laid out. Every battle arena will have flat ground and that is all. Nothing but you and your enemy. It would have been a bit more interesting to add certain terrain bonuses to the mix as well. On top of that they lack variety. A forest in one area will look exactly like the forest in another area, a field at the start of the game is a field at the end of the game, etc. The only difference upon most of these battlegrounds is simply the enemies you face. 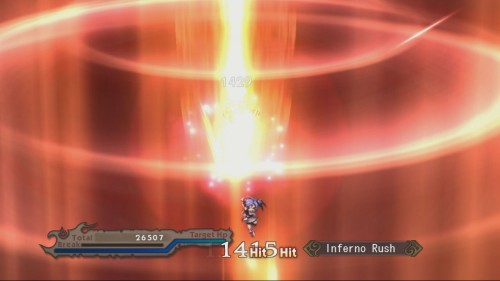 There are zero cut-scenes that play throughout the storyline. Instead the story is told through portraits of the characters which have emotion changes to go with what they say. Fyuria is exceptionally gifted at this, being angry one moment and blushing in embarrassment the next. These portraits are then placed in the background of wherever you are currently residing, be it a town or a battlefield, they are not distracting but blend perfectly well with the art style of the characters. Each character’s portrait is beautifully drawn and extremely well detailed. This is translated well to the CG pictures which will occasionally appear during parts of the game that enhance the moment. These CG pictures are visually impressive and detailed to match their portrait and sprite counterpart perfectly.

Sound:
Nearly every bit of dialogue written on the screen has a provided voice over. Although this voice over is strictly in Japanese only. There is no option provided to change the voice overs, but as long as you enjoy listening to Japanese then it will be non-consequential for you. There is also spoken word during the battles which remains in Japanese with zero subtitles provided.

On top of that many enemies will have the same death call, meaning that when facing a large force of the same type of enemy, as you defeat them you will be assaulted with many similar cries of anguish. Your own playable characters speak as well, though they have a variety of different dialogue clips that they will say at will during the battle and at the beginning of their move.

The music provided inside of the game is entirely instrumental. There are no vocals to these songs which is all well and good. The reason for this is the instrumentals that you will hear within the game always match perfectly for the area you will be occupying. Heroic moments are coupled with uplifting background music. Awkward romance moments are provided with goofy sounding music to go with it. 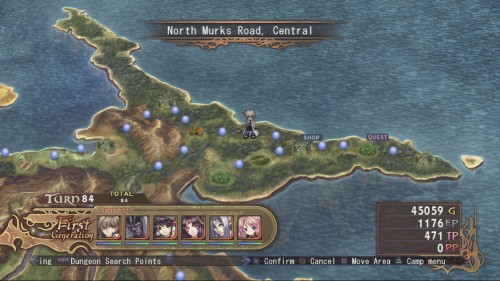 Gameplay:
As you venture across the various continents in Agarest War, you will be navigating through dots on the map that are your path line. These dots are all battles in either single format, or a string of battles. There are quite a lot of these battles bear in mind, as you will be fighting much more often than anything else in the game. Beyond the battles there are a medley of towns and fields for story events to take place.

In these towns you can access the various shops any RPG would have, such as the Item Shop, Blacksmith, Monster Guild, Adventure Guild, First Aid, and Horoscope.  The horoscope is a bit of a unique feature, as it tells you how your offspring will fare with their stats.  The monster guild is unique in the way that you can trade captured monsters for items, which provides a type of bounty game.

In the blacksmith shop you can use the EP (equipment points) you have gained over your battles to upgrade anything your characters can wear. From the weapons to accessories every bit is upgradeable and is very in depth. Certain weapons receive major boosts through this process, sometimes making them much stronger than any weapon available for a long period of time which gives the rewarding feeling of truly creating something powerful. 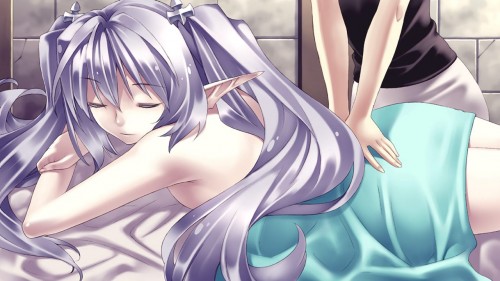 These powerful weapons are essential in the many battles you will face. As I said before, you will be fighting hundreds of battles against all kinds of creatures both humanoid and bizarre. These battles are controlled via turn based combat and a move order. First your characters move to selected positions upon the screen, then battle will commence as you would expect for an SRPG. However there are a few things which set Agarest War apart when it comes to the battles.

The “Link System” improves battle greatly by offering some tactical choices and the ability to unleash a devastating hailstorm of attacks on your foes. Each of your party members will have a grid of glowing squares around them, and when another party member is in this square they are linked. Each character can be linked multiple times and the whole party can become one giant attacking force. Bear in mind though that your opponents also have this ability and can quickly eliminate a hero. 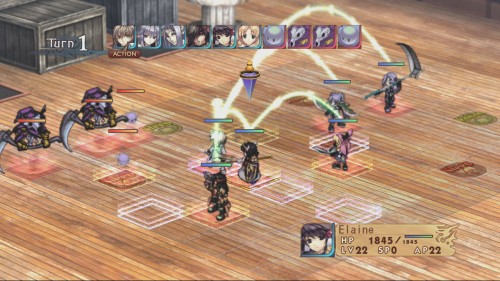 These links are essential in battles against tougher enemies, and the factor of being able to combine your attacks helps fluidly transfer between healing and attacking. Also specific attacks, when put in the proper chain unleash a graphically impressive special attack. These special attacks are available at any time you have the required skills to use them. With the uniqueness of the link system and these special attacks, battle is quite exciting even with the slow turn based combat.

What about making love instead of war?  Record of Agarest war contains a dating simulation mixed right in to the storyline.  The Soul Breeding system as it is called is how the story eventually advances throughout the generations. This dating system is handled through the various conversations you will have with your party members.  Each generation contains three different women with different personalities that you will be able to romance. Some you meet as enemies, like Sherufanir,  but eventually come to be a romantic interest.

You can determine each woman’s feelings towards you with her portrait on the right side of the text box, and also whether certain actions have made her happy or unhappy.  Yes there are many risque themes that occasionally are brought up but they do not overtake the actual romance.  At the end of the generation you marry whichever woman who like’s you the most which is a nice feature.  Then the next generation of hero will vaguely resemble the mother.  The Soul Breeding system is a nice touch as you romance your favorite heroine, and also provides at least three different playthroughs for each generation of women. 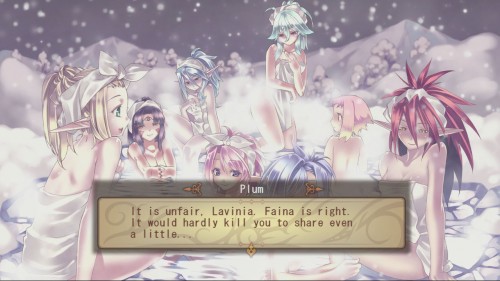 Also, as a minor hint.  The game has a turn counter, as you advance through the game your turns will start counting up as you go to battles and events.  Some events are turn related so if you spend to much time doing side quests, you have the chance to miss a few of the events which is unfortunate, because there is no warning for such an action.

Overall:
With a unique art style, and definitely an unique outlook on the SRPG genre, Record of Agarest War is a hard game to pass up for anyone who loves RPGs. Even if you are not an RPG fan but love a great long storyline, then Agarest War is also right up your alley. There are some issues of course, such as the graphics during battles, the odd feeling of déjà vu during a fight, and the inability to adjust the voice over language. If you can look over these problems however, and are looking for even a heavy dose of romance in your RPGs then look no farther than Record of Agarest War.

I give Record of Agarest War for the PSN: