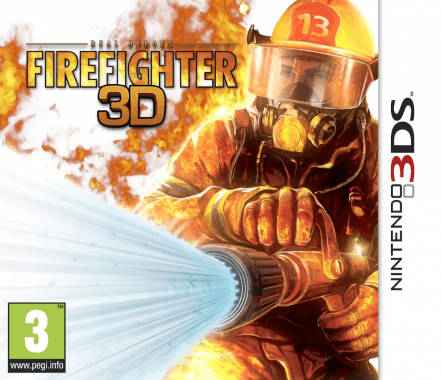 In all my years of gaming, until playing Real Heroes: Firefighter 3D I had never come across a fire fighting game, including that of the same name which appeared on the Wii (minus the 3D that has added to emphasise the fact that it is on the 3DS). However, with a little researching and after looking over assets from the Wii game, I’ve come to the conclusion that this is a 3DS port of that game, so any fans of the fire fighting genre will have probably already seen the guts of it and have another long wait in store for the next fire fighting game. 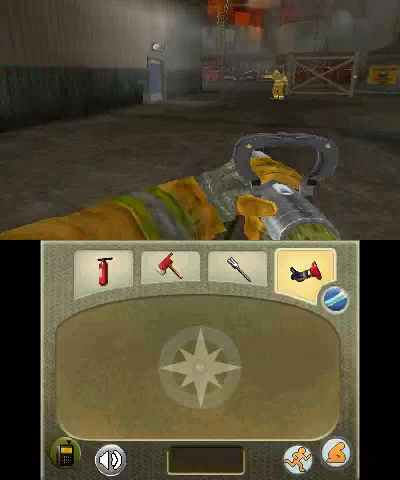 As the latest cadet in the fire fighting academy, you embark on your training to become a fire fighter under the watchful eyes of the your superiors (complete with friendly banter between these work buddies). Some will like the banter, some won’t – but c’mon, it’s a means for these virtual characters to relax and ease the tension in a stressful job like fire fighting. Plus it’s at the very centre of the story, because without the voice acting there would be no characters as their expressionless faces leave much to the imagination.

Your training conveniently acts as a tutorial, teaching you how to use all the fire fighter’s tools at your disposal. It trains you to find stations dotted around to grab a fire hose as you only have so much line before you can go no further with a hose; then you’d use your fire extinguisher. Also on your touch screen toolbox on the bottom screen is a halligan (special rescue crowbar) to open things, an axe…to open things a different way, as well as in certain situations a rotary saw to cut your way into or through something, and hydraulic spreaders to, say, squeeze the door off a car in an emergency.

All the tools work well and are explained nicely, including the different nozzles you have for fighting fire and the two different control scheme options (you can use the touch screen or the buttons), except for the rotary saw, which on top of being explained poorly, doesn’t work all that well once you do know how to do it. This is mainly because it relies on too much precision, when the player should always just be given the benefit of the doubt when they’re close enough rather than have to fiddle about trying to find the exact place the game’s creators intended you to start sawing. 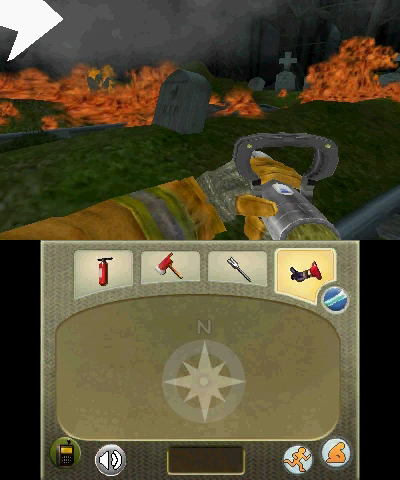 It’s one of the hottest, driest summers in LA on record, though, so you’re fast tracked through the training and are out on duty fighting the many fires that are breaking out in no time. The game could have just as easily have been called ‘Firemen: The FPS’. It’s essentially a first person shooter except your guns come in the shape of a hose nozzle or a fire extinguisher and fire water and foam instead of bullets, and the melee combat sections of the game are limited to doors.

All joking aside though, as you are probably writing this off as dull, it’s a refreshing change to be shooting fire instead of bad guys. There’s a reason behind your actions that everyone can understand; shoot the fire, save the people. Most shooters encourage you to take for granted that you’re murdering some guys that come into view. When you think about it, you’re not exactly the good guy. At least here there can be no doubt and everyone has a common enemy: fire. 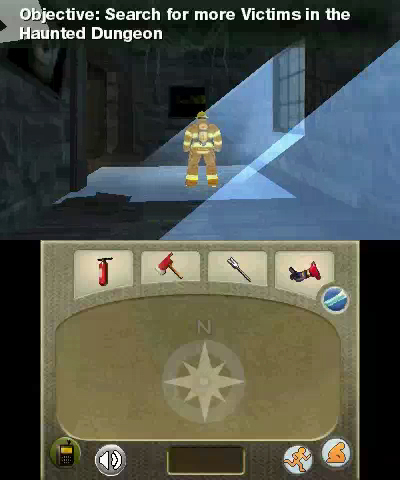 There are a staggering amount of games with fire in them – considering explosions usually lead to fire. Yet in spite of fire getting a starring role in so many games, no one seems to get it right. If you actually go up investigate in many games (read: walk up to and into the fire) it turns out to be guarded by and invisible wall, causes your character to do some weird jerky movements and doesn’t behave like real fire at all.

Real Heroes: Firefighter 3D has gone back to basics with its fire mechanics. The flames spread as squares, spreading if you don’t put out every last one. But on your missions it isn’t about putting out every last one; it’s about containing the fire, protecting those who need to escape or locating people to carry to safety.

Puzzle elements are simple; merely locating a fuse box or gas valve and switching it off to eliminate the danger. When weaknesses in the game come through they do so to comic effect. For a start, your co-workers animations look odd when they’re dashing through a burning building – the phrase ‘high knees, lads!’ springs to mind.

The AI is poor, such as when it unintentionally shows an ineptness at fire fighting. It looks like something from a comedy sketch when you’re on the massive fire truck mounted water cannon and you see and fellow fire fighter running back and forth with pretty much a bucket of water trying to douse the flames. There was also an instance where the fire fighter abandoned the factory workers surround by flame to get himself to safety. 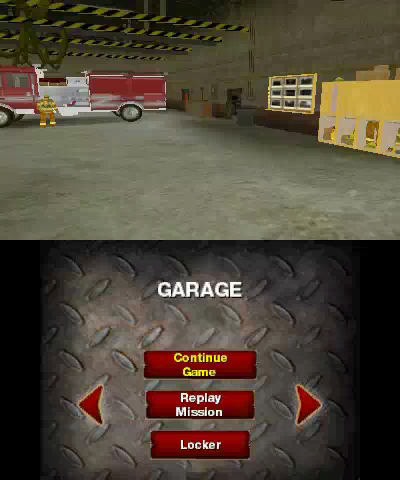 It’s not a bad example of a 3DS first person shooter, either. The controls are passable. The turning is too slow for anything close to quick reactions thanks to the lack of a second analogue stick, instead having to make do with the stylus on the screen, but the touch screen tool change works well. The visuals aren’t too hot, but it’s not a bad attempt at a three-dimensional game world on a small screen, and it’s certainly a functional environment though not a very pretty one. Plus the fact that the developers have actually bothered to include voice acting to make the story more engaging deserves some brownie points.

As my first fire fighting game I wasn’t sure what to expect, but I can’t say it has left me with a bad impression of the rather niche genre. Its unique approach to the shooter makes for a refreshingly non-violent FPS. Fire has a devastating power and it’s hinted at in parts of the game where suddenly it engulfs the room around you in a matter of seconds, but then the illusion is spoilt when it doesn’t progress any further to allow you to escape in your own time. Executed correctly it could have been stunning, emotional – and still can be if the developer/publisher did decide to take it any further – but as it stands it’s a new experience, not a special one.