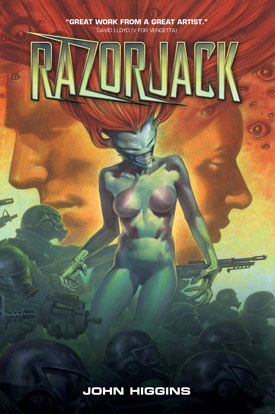 Razorjack is the brainchild of John Higgins, the man who coloured such comic book heavyweights as Batman: The Killing Joke and Watchmen. With an impressive resume behind him you would be expecting great things from Razorjack, and you wont be disappointed. Although the book suffers from some pacing issues and plot confusion, the characters and narrative are gripping, and definitely live up to the legacy that Higgins has built for himself. 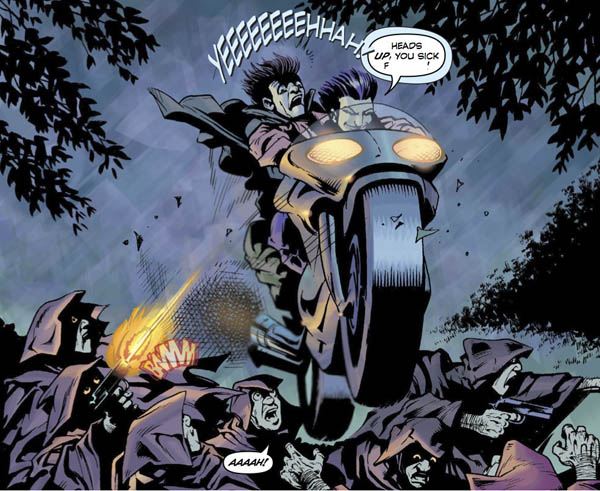 Razorjack is a cop story first and foremost. It is about two rogue cops who are caught smack bang in the middle of an invasion plot from a violent, evil demon queen called Razorjack. The two cops; Ross and Frame are sent to track down a series of killers, which turns out to be part of a much larger, supernatural case. Razorjack wants entry to our world so that she can corrupt and rule. The book basically works as two stories intertwined; we get to see the events from the point of view of Ross and Frame, as well as a few other characters, while every so often we are also witness to Razorjack and her machinations.

It is the fact that the story is intertwined that is perhaps its Achilles’s Heel. The book feels haphazardous and suffers from inconsistent pace and timing. Shifting from Ross to Frame or to Razorjack (or even some of the other characters) can sometimes be jarring, and often happens right in the middle of a climactic scene. It is also difficult to tell how much time is elapsing between pages, which can cause some confusion to the reader.

At the completion of the story, which sets itself up perfectly for future installments, I was left wanting more. Not more narrative per say, but I felt like the book needed more exposition and explanation. We are introduced to the concept of Razorjack and her Bitches so suddenly, that aside from a few sentences (at most) of dialogue, we don’t really know anything about them. There is a lot of lore and back-story alluded to in the pages of Razorjack, and I just wish some of it was explored a little more.

The book also contains two supplemental stories, one set at the conclusion of the book and one set many many years in the past. I can’t speak in too much detail about either one without seriously spoiling the book, but I will say that they do start to provide a little more context to the story. However, and this is especially true with the story set in the past, the way that they connect to the present narrative just raises more questions than they answer. The story set in the past actually feels like it should have been a supplemental addition to a second or third volume.

Apart from its problems, Razorjack is a really good read, able to capture the reader’s imagination, as well as make you care about these characters, whom at first glance appear to be very one dimensional (this is later proven to not be the case). At one point, I sincerely thought that the book was going to go all ‘Game of Thrones’ and kill off the main characters. The story and characters alone are enough to keep you more than interested, even if you are confused about how the plot is unfolding, and the very real potential for protagonists to bite the big one adds a whole layer of suspense. 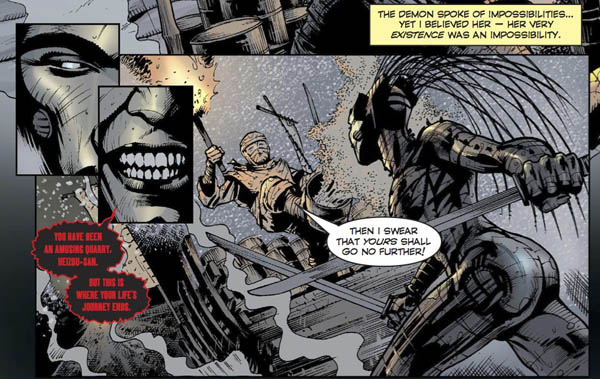 I feel like if i ever had any criticism’s about Higgin’s art style, I would be committing comic book blasphemy and be forever banned from nerddom.  Higgins is a legend of the industry, having worked on Watchmen and Batman: The Killing Joke, and Razorjack is him at his finest. While the story has a few hiccups, his artwork here is absolutely phenomenal and absolutely knocks it out of the park.All of the drawings in Razjorjack are expertly done, and they radiate with Higgin’s signature style. The colours are all really rich and the linework is fantastic. However, what is the most impressive is the use of shadow.

Even when he coloured The Killing Joke, Higgins used a lot of shadow in his work, and Razorjack is an example of an artist having further refined his craft. A lot of detail that other artists would normally draw into their work is obscured by shadow, which allows the player to build up the full picture in their mind. The shadowing is also used to great effect to define some features that would otherwise have gone unnoticed, such as the ruffles in a pant leg, or the muscle definition under a monster’s arm.

If there is one complaint about the artwork, it is that some of the characters don’t look like they belong together. In a few frames, characters looked like they were from different worlds, plucked and put together on the same page. These characters that don’t always fit in tend to have more detail on their faces etc, while the rest are quite plain. 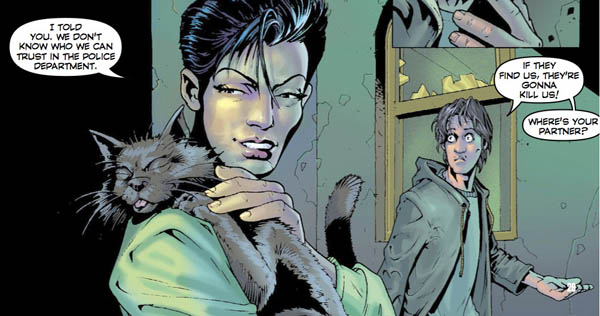 Razorjack is the brainchild of one of the most well known people in the comic book industry, and his prestige shines through in spades through this book. Although it suffers from some pacing issues, and a lot of plot holes and inconsistencies, the story is well thought out, and has an incredibly rich back story as well as likeable characters. There is a lot of lore behind the scenes of Razorjack that sadly the reader doesn’t get to see, but hopefully this will be rectified in future volumes. Razorjack is a definite page-turner, and one that no comic fan, or fan of inter-dimensional monsters should miss.