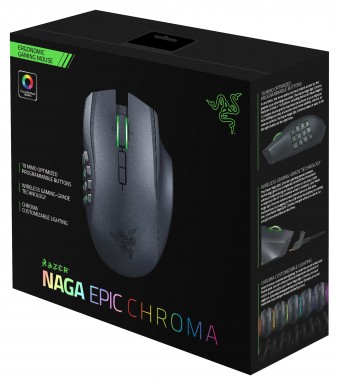 The wired Razer Naga was not the only Naga to get a facelift in 2014. The top of the line Razer Naga Epic also received a similar treatment. The mouse was also rebranded as the Razer Naga Epic Chroma, joining Razer’s Chroma line-up of multi-coloured LED PC accessories. The MMO-oriented mouse features a grid of twelve mechanical buttons on the right hand side of the mouse, a four way mouse wheel, two top buttons for adjusting sensitivity, and an 8,200 DPI laser sensor.

The Razer Naga Epic Chroma’s box is rather humbly sized for one of Razer’s top of the line mice, unlike the huge museum style container that the Razer Ourosboros was packed in. Slide off the slip and inside is a lovely clam-shell style box that feels more in line with the Razer Naga Epic Chroma’s $129.99 USD pricing. Inside is the hefty dock, a specially designed micro-USB cable, the mouse itself, and Razer’s usual pack-ins. 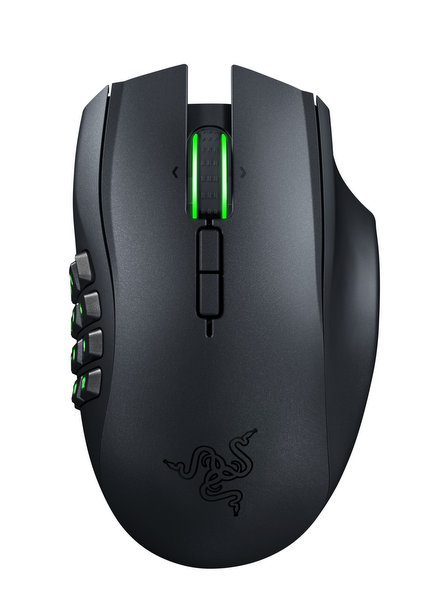 Installation is pain free. The Razer Naga Epic Chroma can accept the included micro-USB cable in the dock or the mouse itself. The dock is automatically paired with the mouse and the mouse can be turned off and on with a switch located underneath the mouse. Although the mouse works without any drivers installed, Razer Synapse 2.0 will need to be installed to get the most out of the myriad of buttons on the Naga.

The dock is a sturdy piece of plastic. Between its weight and the sticky plastic on the bottom of the dock, there is no way the dock is moving anywhere. There is a generous curve in the dock design that lets the Naga Epic Chroma drop onto the dock and start charging without much hassle or adjustment. A small nub on the dock corresponds with a small dip on the bottom of the mouse keeps and a small magnet is built into the dock keeps the mouse in place while charging.

The switch between wired/wireless modes is similar to Razer’s previous mice. The user simply needs to unplug the micro-USB cable from the dock and plug it into the mouse. The cable is designed with a very obvious top and bottom, which avoids the usual frustration of having to plug in USB cable a few times until the correct plug orientation is discovered. The plug is also designed to look like part of the mouse design, so when the Razer Naga Epic Chroma is plugged in, the only sign that the mouse is not a wired only mouse is a faint line near the mouse wheel.

The battery is rated to last 20 hours. Though it isn’t confirmed by Razer, it is probably safe to say that the battery is a lithium-ion type pack. Unfortunately, the battery is not user replaceable. Compared to the NIMH battery design the Razer Ourosboros uses, the Razer Naga Epic Chroma sacrifices user serviceability for a longer battery life and a lighter weight.

The Razer Naga Epic Chroma is actually on the smaller end of gaming mice. It is not quite as small as laptop mice, but at 119mm in length and 75mm in width, the mouse is actually usable with a claw-grip with my small hands. The mouse has a pretty aggressive hump where the palm rests and has ditched the three side panels that came bundled with the original Naga Epic. The new side panel design has a nice big groove for the ring finger to rest on and a rubbery panel with a hex pattern engraved for grip. Razer claims the new design is more comfortable for a larger range of hand types. Personally, I found the design to be really comfortable for long periods. 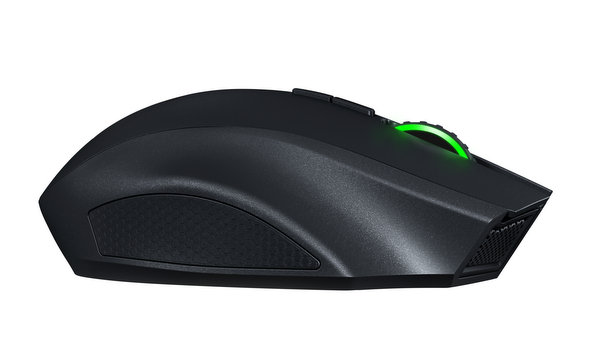 One of the new design features of the Razer Naga Epic Chroma is the new thumb panel. The buttons have been replaced with mechanical switches that have a very nice click to them. The feeling definitely isn’t as crisp as the main mouse buttons, but feel better than most side panel buttons found on gaming mice. The side panel’s design also changed. Previously the Razer Naga Epic Chroma featured a design that curved outwards. Now the panel is curved inwards and the two centre buttons 5 and 8 are positioned higher than the remaining twelve. I was a little intimidated by the thought of using twelve buttons on a thumb panel by touch, but the new design really works! With a little bit of practice I was able to start hitting buttons without much thought. The biggest challenge is actually memorizing all 12 key bindings. 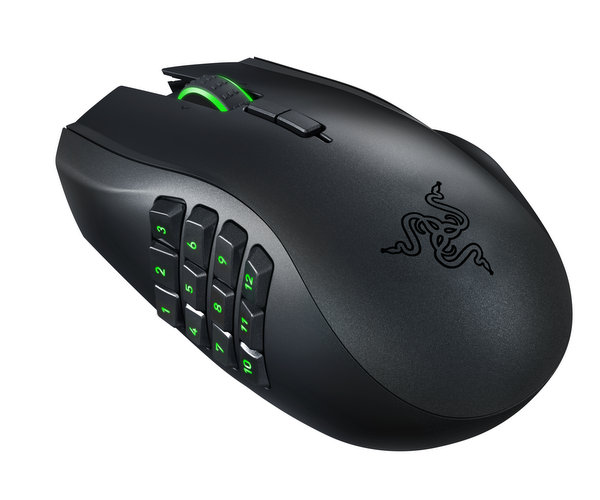 The 8200 DPI laser sensor works like a charm. It is overkill for MMORPGs, but the sensor is accurate and performed without problems. The sensor can be adjusted for polling rates, acceleration, and up to five different stages of sensitivity can be set through Razer Synapse 2.0. X and Y axis sensitivity can be set independently, if that’s what floats your boat.

As part of the Chroma series, the Razer Naga Epic Chroma is armed with multicolour LEDs. The user can select from 16.8 million different colours for the thumb buttons and the middle mouse buttons. Razer Synapse 2.0 is only capable of cycling colours, but the LEDs do a great job of it. Many multicolour LEDs have a very obvious blink when switching between colours, but Razer’s manages to stay at a consistent brightness level and scroll through smoothly. To save batteries, different brightness settings can be set for wired and wireless modes along with the ability to disable lighting when the monitor goes to sleep. 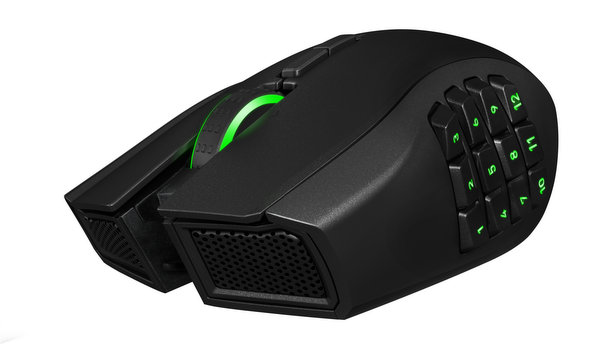 Razer Synapse 2.0 has some extra features designed to leverage the multitude of macros and keybinds that will be used with the Razer Naga Epic Chroma. Each profile stores 8 key maps each. An in-game configurator can be accessed in game to make quick changes to the profile, key maps, sensitivity, and macros. The in-game configurator officially supports most of the biggest MOBA and RTS titles, but I found it worked for many other games not listed on Razer’s support page. World of Warcraft players get an additional in-game addon that will help players configure their Nagas in game. I like the fact Razer Synapse 2.0 allows gamers to bind images to each of the twelve thumb pad buttons, allowing for quick reference in the in-game configurator tool. Profiles can be triggered with specific .exes, though I find it does not play well with some Origin-based games. My biggest complaint is how resource hungry Razer Synapse 2.0 is, as the core process normally eats up 50-80MB of memory and Synapse 2.0 itself eats up another 50-100 MB of memory. 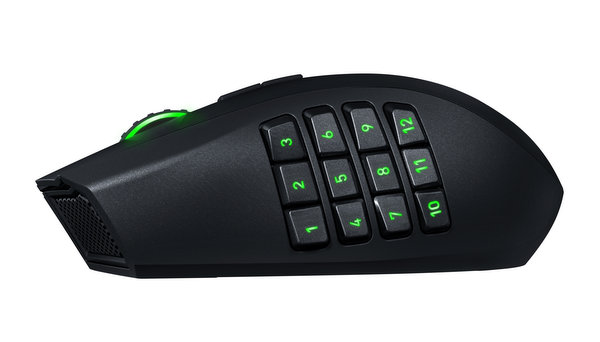 Although the Razer Naga Epic Chroma is designed for MMO gamers, I’ve had a great experience with the mouse in other genres of games. For a small handed gamer like me, this mouse has been a God send. It’s been a refreshing to be able to easily reach all buttons on my mouse and a huge boost to the number of keys I have access to. I’ve finally been able to call in score streaks in Call of Duty games without having to hunt around on my keyboard for the number keys and actually reach more than the ten or so extra keys around my WASD keys.

Razer has knocked it out of the park with the Razer Naga Epic Chroma. The mouse is well designed, the sensor is dead accurate, and the Synapse 2.0 software is feature packed. The weakest part of the package is Razer Synapse 2.0, but not by much, as it’s a tad RAM hungry. At a $129.99 USD, the mouse is an expensive buy, the mouse is absolutely worth the purchase. 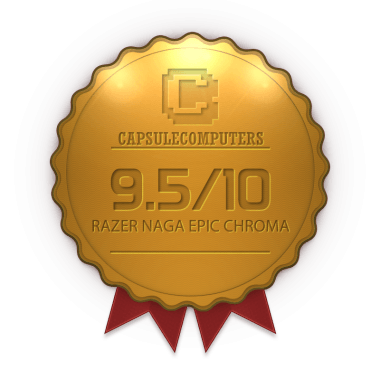