The Razer Ferox, in my opinion, is probably one of the best speaker systems for portability, and therefore, ideal for LAN parties. The speakers are small and easy to install, making them a hassle free solution to your audio needs.

The Razer Ferox speaker system have an amazing level of Audio for what they are. The package includes two speakers and a carry case, which has the cables required to hook up the device neatly within. I kind of disliked how the cables were hidden within the carry case, as it took me a brief moment to notice that they were in there (as there was no obvious indication as to the whereabouts of said cables). But they were easy enough to find with a little observation, and I may have been a little surprised (in a good way) when I found them. Plugging the speaker in from there was an easy task, with the speakers running on a standard 3.5mm audio input which fit straight into your standard heaphone port on your pc. The speakers are unpowered though, which means that they have to be recharged after use. This is remedied by the included USB cable and makes recharging as simple as plugging it into the USB slot.

Unfortuntely, this is where my next gripe comes in. If you want to recharge your speakers, you can’t listen to music at the same time as the EMI (Electro Magnetic Interference) messes with the audio, which makes it uncomfortable to listen to. This may also be damaging the device, but I can’t back that assertion up. So in order to recharge the device, the speakers must be turned off or unplugged from the audio jack. Turning off the speakers is as simple as pushing down the topmost section of the device until they click-lock. You can turn the devices back on by simply pressing the top in so it releases the lock. 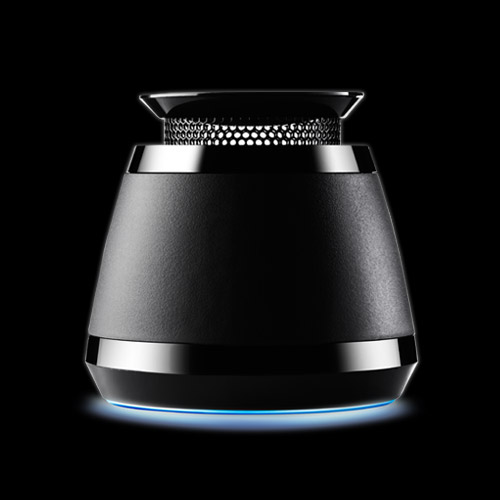 While the device is turned on, the base glows an attractive blue, which shines steadily while they’re in use and pulsate when they’re not. This gives my desk a sci-fi feel to it, especially when coupled with my Imperator mouse. The Ominous glow from my desk is amazing.

The quality of the audio is pretty reasonable for what these speakers are. They’re not 5.1 channel surround, or 7.1 channel surround, they’re just basic stereo speakers. They sound pretty good though, so it’s not much of a problem. As I stated in my opening, these are incredibly portable and are easily one of the best stereo setups for portability and ideal for LAN parties. I think that if you use them for occasional use, like watching a movie on a laptop, or as a backup sound device for your primary PC, these speakers are the ones you’ll be wanting.

The speakers do have this awesome feature in regards to the sound though, and that is that they produce sounds in a 360 degree radius around the speaker. Placing these strategically produces a superior melody that I was quite impressed with. The only downside to this is that you need to adjust your cables so you can place them in a strategic position so as to maximise the sound. 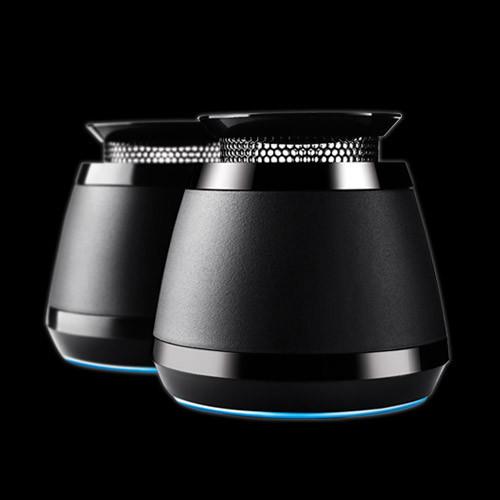 The battery life of the device is pretty long, as I’ve had these running for the majority of a day and they’ve still stood strong. However, I should point out that they don’t last an entire 24 hours, as I realised recently. After exhausting the power, the speaker set does not take all that long to fully recharge, with the recharge time only being a couple of hours.

The Ferox speakers impress me with their simple, yet elegant, design. The way it pops open, the cup-shaped body and the chain-like cover over the actual speakers all make the Ferox an amazingly beautiful device. The blue LED lights beneath, as I previously mentioned, are icing on an already sweet cake. Not only does the device look aesthetically pleasing, it also feels as though it could potentially survive a fall or a harsh beating. I haven’t actually tested this, due to wanting to keep them in a working order, but they seem like they’d survive a casual drop.

The speakers come packaged in a sleek box, that is both compact and trendy. The way the word Ferox shines in the light is truly indicative of the quality within. These are not a cheap speaker, nor are they weak; as indicated by the tag-line “Tiny But Mighty”. Indeed, Mr. Box, indeed. The box further details the  device and its functionality, which I found largely informative and pretty awesome. Inside the box, upon first opening, you will find the speakers enclosed in a protective plastic encasing. This plastic was easy to remove and caused little hinderance to the eventual operation of the Ferox. In a slot behind the speakers lies the previously mentioned carry case that houses the speaker cords, as well as the speakers themself, eventually, should you want to take them out of the house. 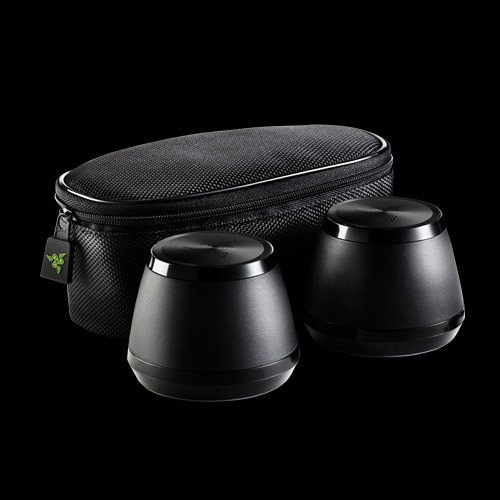 The speaker cords are made of a lace-like material that add to the overall aesthetic of the device, and are also very comfy on the hands. Unlike that undurable rubbish rubber. The cords cover a decent distance from an audio jack, but for my set-up, is not as long as I would like. This is a minor gripe, though, as the speakers are an amazing device.

Also included with the packaging are the standard, yet awesome, documentation and other miscellaneous bits of paper, such as a doctrine to the Cult of Razer. The included stickers can be stuck to your peripherals, PC, or anything else that you can think of.

Overall, the Razer Ferox is an amazing device, spread across two forms of output. As I’ve mentioned a few times throughout the review, these are definitely made with portability and LAN gaming in mind and can add to the overall gaming experience in these events.  If you’re the type of gamer who regularly attends a friendly LAN or game on a portable device (these can also be used for portable music players too!), then you will definitely want to be picking up the Razer Ferox as soon as you can.

Update: Razer have informed us that the review pair of speakers we recieved were faulty and are not supposed to buzz while connected to the USB port on your computer. Stay tuned for more updates when we get our new pair in for testing.