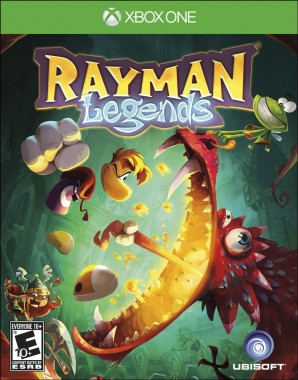 Overview
Originally set to be an exclusive release for the Wii U, Rayman Legends is a follow-up to 2011’s critically acclaimed 2-D platformer, Rayman Origins. The game received numerous delays on the Wii U, ultimately dropping for last gen consoles and, recently, receiving a release for the Xbox One and PlayStation 4. Can Legends reach the high marks set by its predecessor? Is the next-gen version of the game worth picking up? 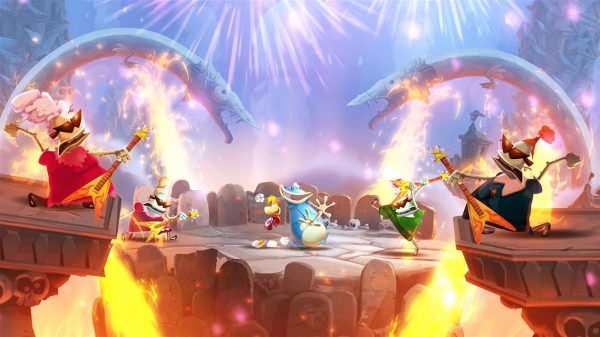 Story
After a deep, century-long sleep, Rayman, Globox, and the Teensies are subjected to terrible nightmares that have been growing ever stronger with the Bubble Dreamer. Awoken by their friend Murfy, they find out that five Dark Teensies have been wreaking havoc. They set out to rescue the 10 princesses captured in the nightmares along with hundreds of Teensies who have also gone into hiding, as well as defeat the Dark Teensies and restore peace to the land. 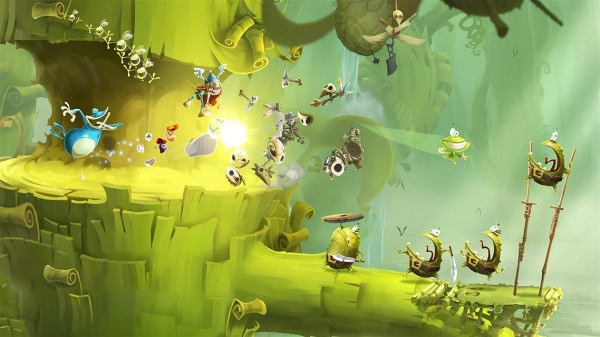 Gameplay
Rayman Legends is a deep, rich game that will keep players busy for dozens of hours. The game is packed with 120 levels, 40 of which are back from Rayman Origins. With 700 Teensies to rescue and dozens of other collectibles and challenges, Legends promises to be the sort of platformer game you can sink your teeth into – and savor every single moment.

The game is set up into several worlds placed across a series of paintings. Within each world, you’ll have several levels to play through, many of which are your standard start-to-finish platforming levels. You’ll occasionally have those broken up by speed runs, time trials, boss stages, rhythmic platforming levels, and more. 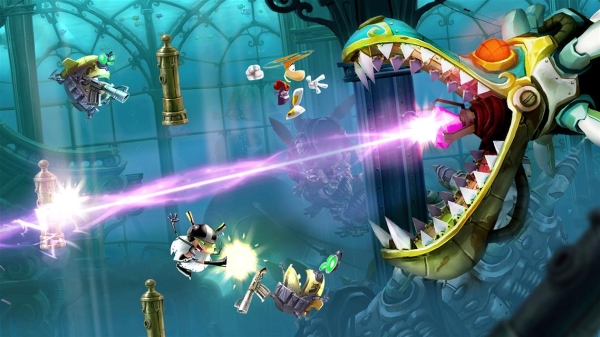 Ubisoft does done an incredible job with its level design in Legends. There are 120 levels and you will rarely, if ever, feel like you’re replaying something you’ve already worked through. The mission variety is well implemented and expertly paced, giving you a few standard platforming levels before kicking in a dash of something else to keep things spiced up.

Beyond the simple variety of the level types, you’ll get to experience a multitude of objectives. You’ll find yourself trying to outrun a wall of fire to save a princess, collect as many lums as possible in a given time limit, take the optimal route backward through a level to save Teensies tied to timed fireworks, and more. Boss battles are interesting without ever feeling boring, lending a wonderful sense of discovery as you near the end of each world. One of the finest treats, however, are the rhythmically designed music platforming stages, which have you running left-to-right through the stage, attacking enemies and jumping to the beat of remixed tunes like “Black Betty” and a hispanic version of “Eye of the Tiger.” There’s nearly no end to the fantastic variety and endless flow of smiles and laughs you’ll get playing through this game. 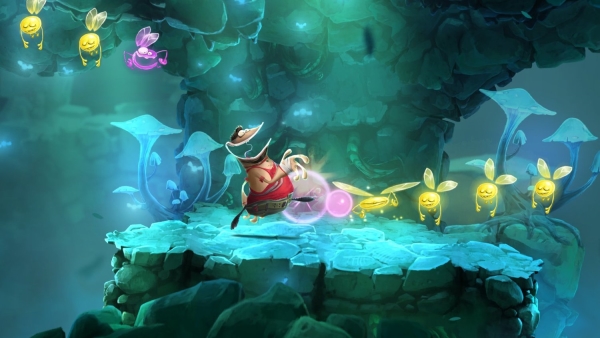 Each level is expertly crafted. Standard missions give you plenty of elbow room to branch out and explore, which is often needed to dig out and rescue all of the Teensies. You’ll have stages you have to run, jump, and wall-bounce through, and others where floating on the wind is your primary mode of transportation. Along the way, you’ll work to collect as many small, golden creatures known as Lums as possible for your score. You’ll also have to employ the use of your small, frog-like friend Murfy to manipulate platforms and the like in the stage, keeping the path clear and navigable for you. They’re all a blast to play through, keeping playthroughs fun and making level replays for enjoyable instead of burdensome.

One of my favorite aspects of Rayman Legends is in the way it eschews what games like the popular Super Mario franchise has always clung so tightly to – time limits and lives. Rayman is happy to be done with those painful hindrances, opting instead to utilize a helpful, intelligent checkpoint system that won’t completely break the flow of the game when it has to be called in. You can still die, sure, but you’ll never have to worry about the game ending on you because you didn’t have enough continues. It allows the game’s exploration to flower and grow, making for a more enjoyable product at the end of the day. 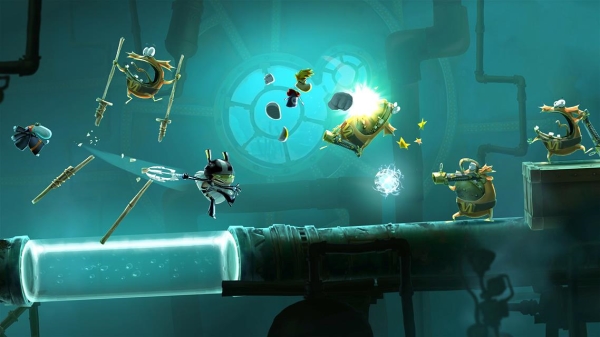 As you play through Legends, you’ll be rewarded with an onslaught of collectible items. Lums you collect are kept throughout the game, and the more you collect the costumes you can unlock – from a Splinter Cell inspired Rayman to a Far Cry 3 Globox and much more. On top of an excellent array of playable characters and costumes, there are both hidden and Origins stages to unlock, as well as a full collection of goofy “creatures” to gawk at and collect Lums from.

Among the embarrassment of riches, Legends also features daily challenges. These will let you jump on for a handful of quick daily challenges that let you see how you stack up compared to the rest of the world. You’re also rewarded accordingly with Lums, based on your performance. When you add in four-player cooperative play and a fun football (soccer) mode that’s great at parties, you’ve got a package you just can’t pass up. 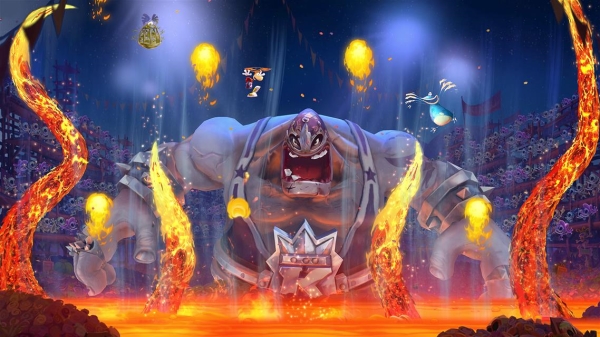 Visuals & Audio
Ubisoft has done an incredible job with the visual design in Rayman Legends, which is only enhanced by it’s release on Xbox One and PlayStation 4. The worlds and characters are vibrant, intense, and stunning. Worlds are aesthetically unique and inviting, each with their own look, feel, and obstacles, while the larger-than-life bosses are humorous and memorable. The designers at Ubisoft did a great job utilizing visual hints and cues to direct players toward content without ever having to spell it out for the player. Most importantly, though, is that it’s all tied together by fantastic animation that’s quick to respond – an absolute must with any sharp platformer.

The audio design within Rayman Legends is also expertly designed and implemented. Sounds are used to great effect to liven an already vibrant world. The soundtrack, both the new and familiar, will have you tapping your toes and bobbing your head as you run through levels. The musical platforming levels previously mentioned are the perfect vehicle to a smile, providing twists on familiar tunes timed perfectly to the action on-screen. You’ll want to crank the dial to 11 while you enjoy Legends.

Overall
Overall, Rayman Legends is pure platforming bliss. The level variety and caliber of stage design shine through at every turn, while the beautiful visuals and rockin’ audio made the jump to next-gen even better than could be expected. The sheer breadth of content alone would be enough to easily recommend Rayman Legends, but the game’s rich quality makes it a must-have. Rayman Legends is a fun, beautiful, addictive platformer players will fondly remember for years. Rayman Legends is truly legendary. 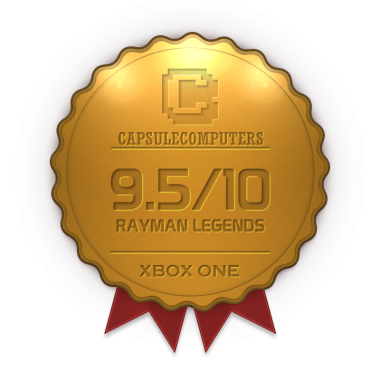