In 1993 Taito Corporation, a company famous for their classic top-down shooter Space Invaders, released yet another space themed shooter – Rayforce. Originally Taito fans could blast through enemy ships on the Taito F3 arcade hardware – before the title was ported to the Sega Saturn in 1995. If the game doesn’t sound familiar, perhaps you remember it by its American title, Galactic Attack or European title, Gunlock. Call it what you will, Rayforce has made its way to the iPhone and iPod touch, and at a rather hefty price. Is it worth the money you’ll be dishing out for this game? Read on and see. 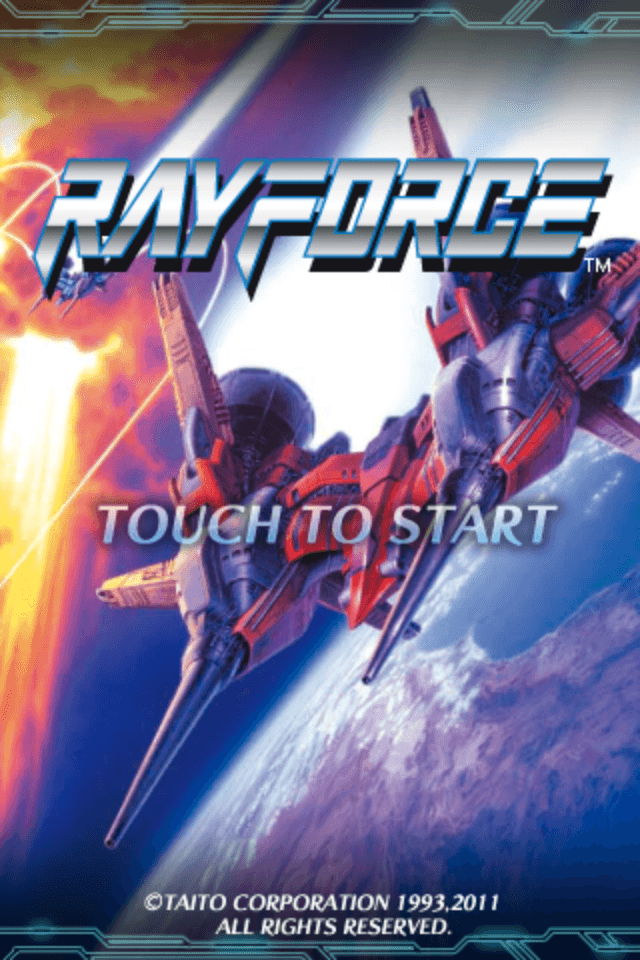 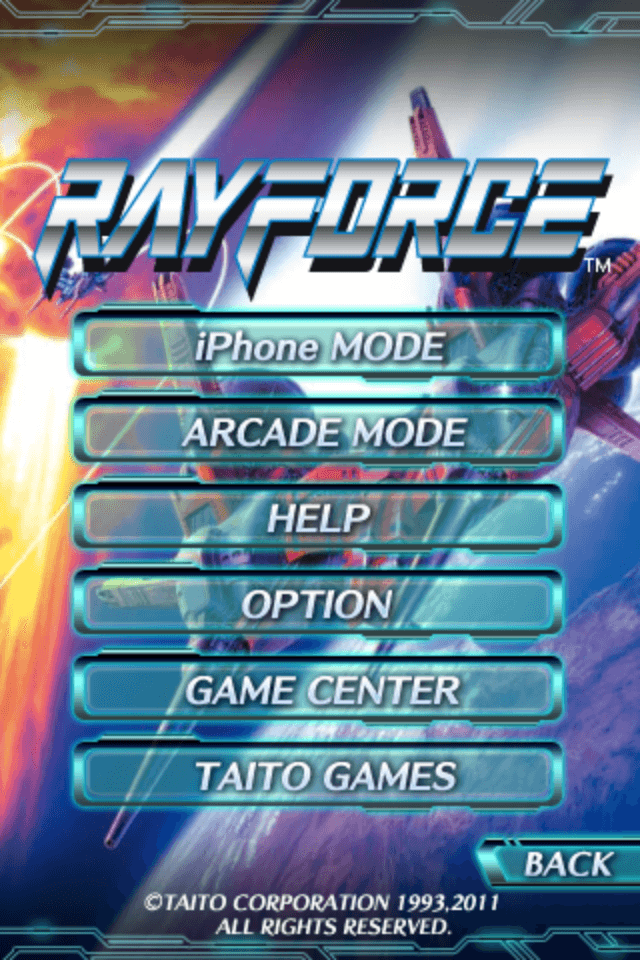 Having not ever played the original title, owning neither a Taito F3 nor Sega Saturn, it’s a little difficult for me to compare the titles latest reincarnation to its original form. However, I can only make an educated guess and assume that the original was played with a controller and not with the sliding of fingers. As difficult as the title is using a finger to control it, I cannot even fathom how hard it would be without the aid of precise finger movements. But before I delve too much into the controls, it may be wise to give an overview of the level structure and mechanical features of Rayforce.

Rayforce is a 7 level based arcade title – with multiple modes for the iPhone. There is little noticeable difference between ‘iPhone Mode’ and ‘Arcade Mode’ perhaps with exception to the ‘insert coin’ to continue after dying. Dying isn’t a big deal in Rayforce. Game overs don’t seem to exist. You die; you come back in the same place. You die again, and again, you insert a coin (or press continue) and start in the same place. The only downfall would be that you lose your weapons upgrades, which themselves are hard to keep track of – especially when attempting to pinpoint the reason for the upgrade. The absence of rewards and punishment is a little weird for me. I understand the score based arcade levels, but that doesn’t really cut it in terms of a sense of achievement. The levels aren’t even unlockable – they can be accessed from the moment you open the App with a mere click. 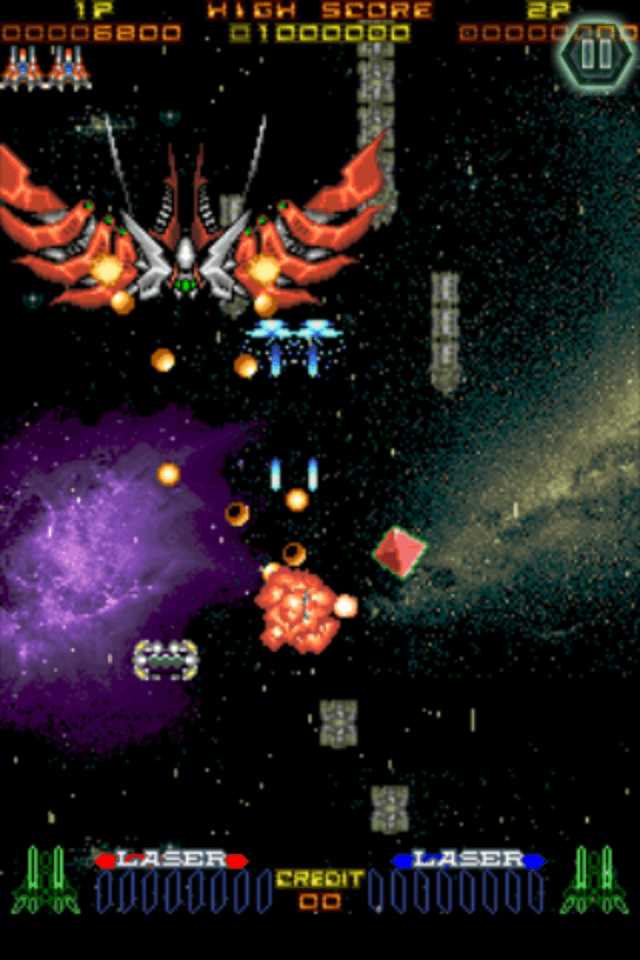 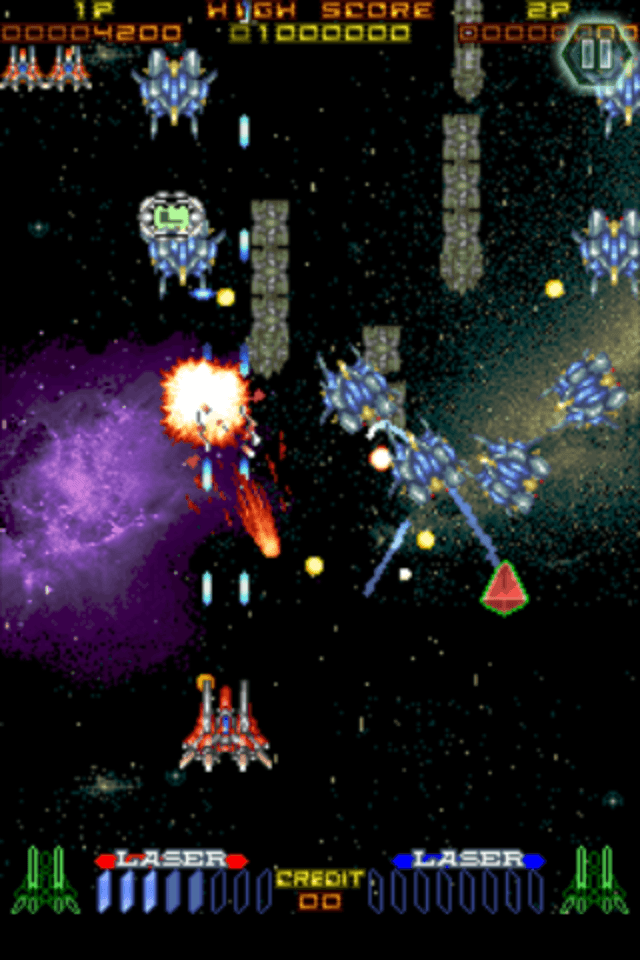 Despite the lack of punishment for dying, I am rather glad the game is structured this way. On my first play through of level one I must have died 20 times. The controls themselves are simple to pick up and even to master. Iphone users will be familiar with sliding their fingers along the screen and will eventually develop a precision to help navigate through fields of bullets. Yet, using a finger becomes highly problematic when attempting to follow the on screen action. The finger, which sometimes finds itself over your ship, will often obstruct the view of enemy attacks, or even enemy ships from behind. There are so many directions from which attacks may come from that it’s impossible to find an appropriate place to anchor your finger. The arcade view, with arcade-style boarders is a little simpler to use because moving fingers along the boarders still controls the ship. But I’ll discuss the problems with that a little later on. 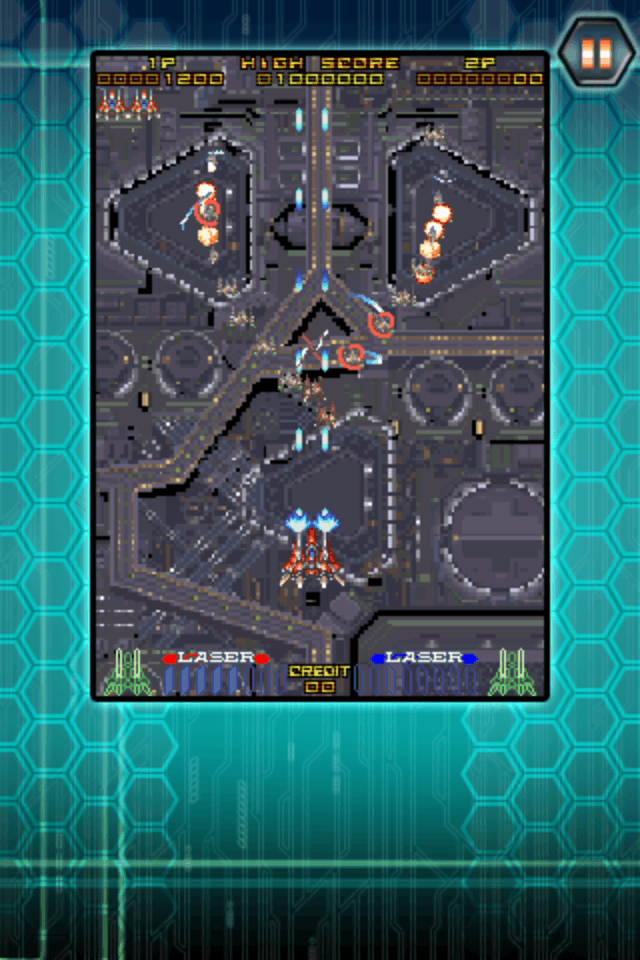 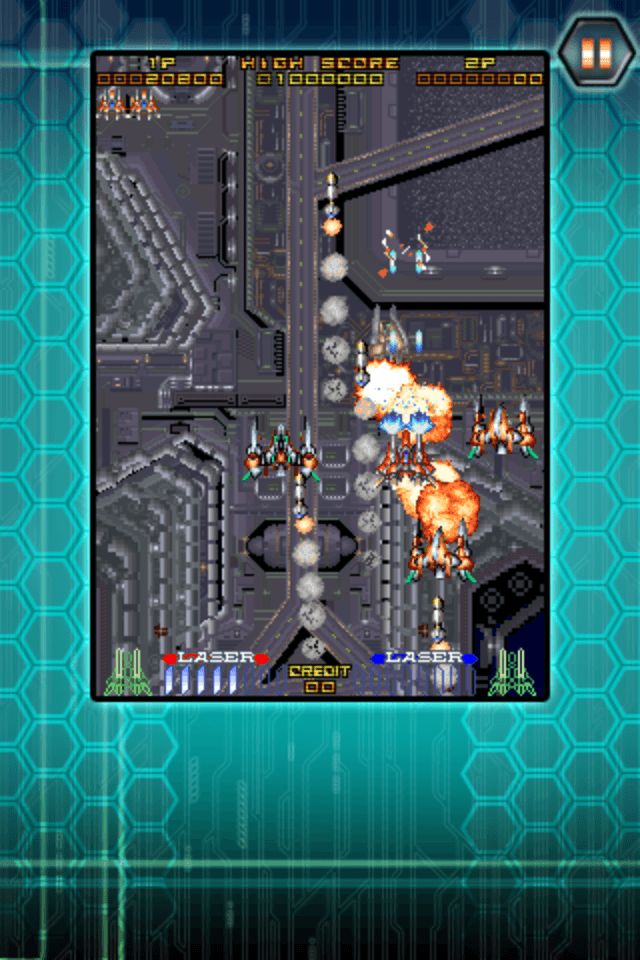 Originating from the 16-bit era, Rayforce retains its ‘retro’ look with pixelated ships and backgrounds. The pixilation makes little use of the retina optimisation of the screen, and often – perhaps due to the top-down nature of the game itself – adds to the confusion of enemy proximity. The only means of telling if bullets or lasers can reach any enemy is by passing over it with cross hairs. If you automatically lock on, it is below you and forward shooting bullets are ineffective. This leads to a wide range of on screen noise, as barrage of enemy bullets, ships, not to mention the onslaught of your own bullets, causes huge levels of confusion until finally a small explosion underneath your finger signifies that you have been killed. Being an arcade based title, it’s a little difficult to picture it being visually updated – but perhaps a little tweak would not have gone astray. Any nostalgic charm that you originally feel when opening the App is in danger of being washed away by frustration.

For those looking for an even more retro feel, there is also the option to add arcade boarders to the game – removing it from its ‘zoomed in’ form. If maneuvering the ship was difficult before, wait until it’s a fraction of the size and certain types of enemy ballistics are virtually invisible. Perhaps the title would fair better on the large screen of the iPad – increasing the screen size and image quality while at the same time retaining that all-important retro feel to the game. 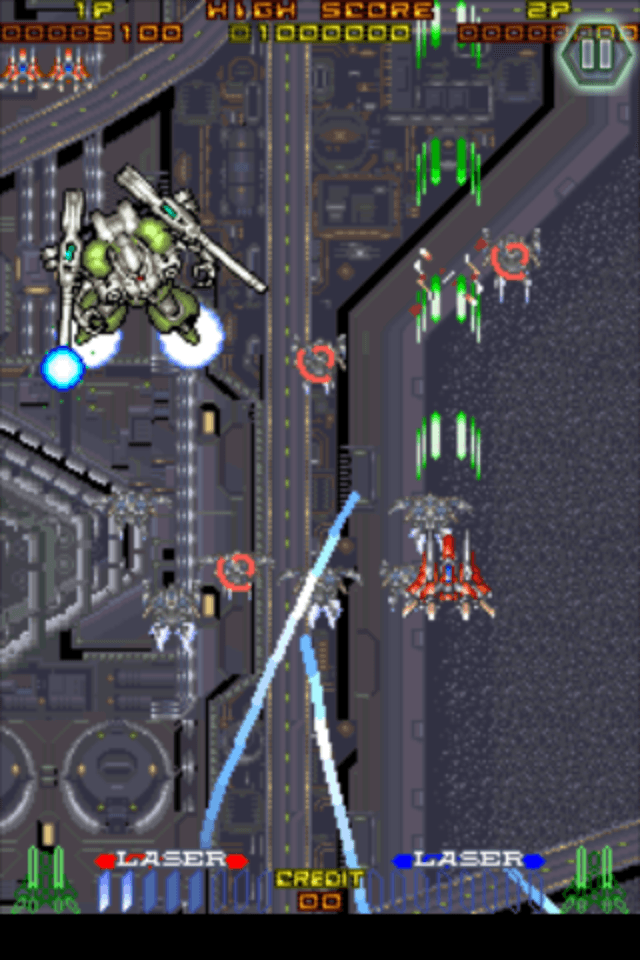 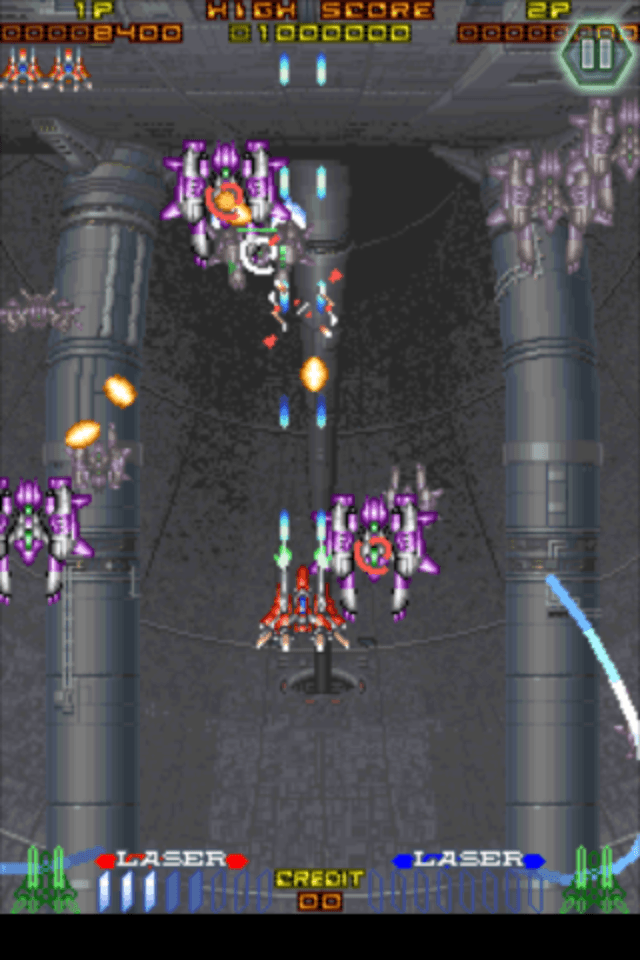 There is nothing wrong with the audio for Rayfroce per say. Each level has it’s own unique soundtrack, each of which retain a certain 16-bit era quality to them. Despite the sense of nostalgia, the music is a tad cliché and sounds like multiple re-hashes of other space-shooter soundtracks. The sound effects are fitting, but with the constant shooting (especially in auto-shooting mode) the sound of laser blasters may soon get to you. 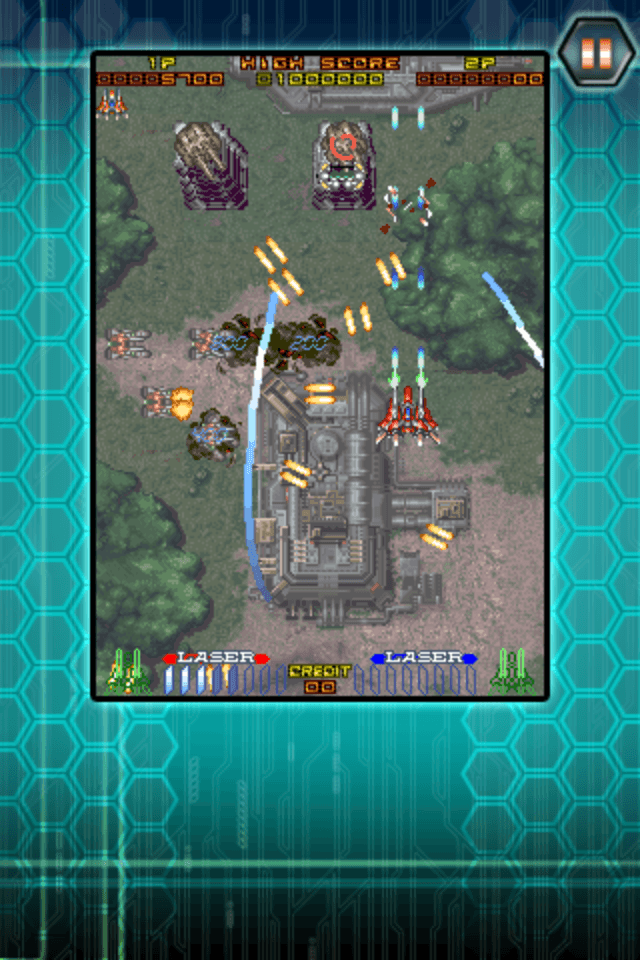 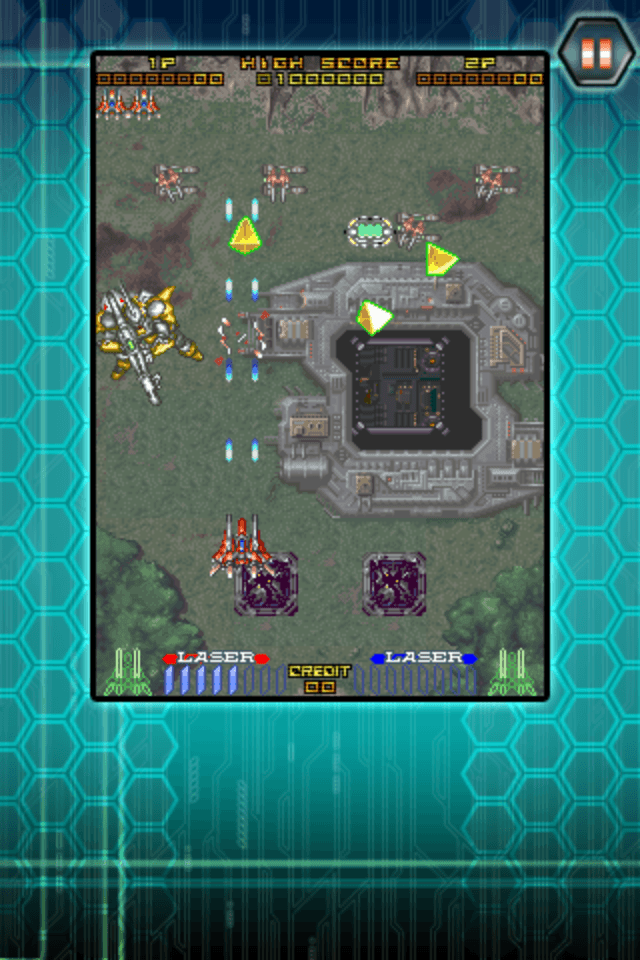 Rayforce may have that retro charm, but it doesn’t translate well to the world of iOS. The control system would be fantastic if it wasn’t for the small size of the screen – often a problem for anything beyond tap-based titles. A graphical boost and shift to the iPad is the best option for a title like Rayforce. Not only this, but $12 for an HD iPad game is a little more reasonable. There is still always the option of playing it on your iPad at times two size but the grainy textures don’t marry well with Taito’s choice to retain the visual style of the original title. If you are a fan of the original, perhaps stay clear of this one so as not to alter your position on the game.