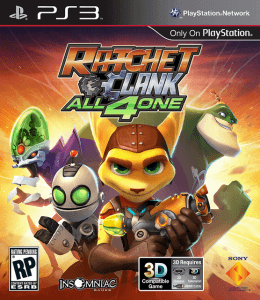 They’re back. Insomniac’s crazy duo has returned for a new adventure on the Playstation 3. Ratchet & Clank: All 4 One is set after the events of A Crack In Time, the previous entry of the series. Players will follow Ratchet, Clank, Captain/President Quark and Dr. Nefarious as they explore a mysterious island and battle a new threat that will destroy all living things in existence. As a game, it does retain the staples of the series, but there are a few set backs that allows the player to have an immense experience. These seem to stem from the co-op focus, with a fixed camera and fidgety lock-on system. The visuals of the game are not bad; a step down from earlier PS3 titles and the music is good to listen to, especially their main theme. 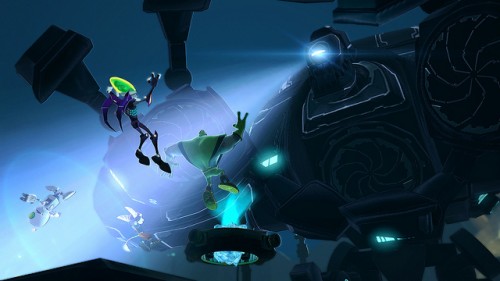 Story
The story starts off as Captain/President Quark (yes, he is the intergalactic president. I don’t know why either) heads off to Luminopolis to receive an “Intergalactic Tool of Justice Award” with Ratchet and Clank by his side, which turns out to be a fake award created by Dr. Nefarious. He, with his trusty butler, awakens a creature known as the Z’Grute, but quickly turns on Nefarious, forcing the four to join forces to stop it. While tracking this monstrosity, robots that don’t belong to Nefarious start following the Z’Grute. It turns out that the robots belong to a facility floating above Luminopolis. The Z’Grute and the four characters are captured, but with the help of an alien called Susie, the four escapes and end up on an alien world. There, they must find out what this new threat is and destroy it quickly.

The pacing is good and the story is sound. It is nothing special but it is quite humorous. The fact that Dr. Nefarious is part of team of heroes leads up to a few humorous moments, especially between Nefarious and Captain/President Quark. The chemistry between Ratchet and Clank is still there, as it has been throughout the series. Overall, with an okay pace and great use of humour, the player may enjoy the story of the game. 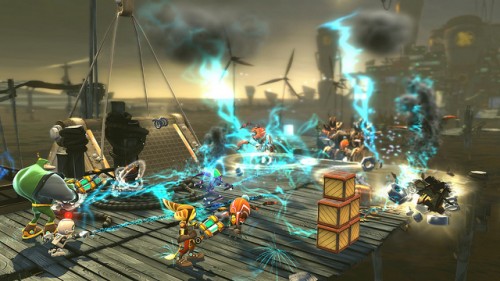 Gameplay
Ratchet & Clank: All 4 One isn’t the single player focus that precedes the previous games. Instead, it is focused on co-operation aspect of multiplayer gameplay. Actually, it is forced upon the players. The co-op can be either be played offline or online with up to four players. It is safe to say that the implementation of a so-op focused core mechanic does cause the game to lose its charm. This is a problem when a game decides to make a game in a series that is predominately a single player experience.

Ratchet and Clank relies on the shooting mechanics and it suffers to an extent due to the focus on co-operative mechanic. There are a variety of weapons, a staple of the series, some as silly sounding as others. The weapons can also be upgraded via weapon shops around the planets. When one targets a single enemy together, the guns power increases and ends with a slow motion explosion. This is quite awesome; satisfaction is achieved when one sees that slow motion explosion. This will not be achieved when the player shoots alone. In fact, the player will feel the weapons are useless. The lock-on targeting system compounds on the problems. The system will not target the enemy you want at times. This tends to create frustration and small doses of anger.

Aside from the shooting, the puzzles and platforming that appear in other games of the series do change the flow of gameplay. Players will jump over big gaps, grind on rails and solve rather easy puzzles. There are also jetpack sections, which happens to be a highlight of the game. In fact, these sections are better in general compared to the shooting sections. The obstacles keep the player on their toes. The camera in these sections is generally in a better position. In the game, the camera is fixed to allow the four-player action to stay of the screen. However, that provides a few problems. In these sections, though, the camera is close to the action allowing the player to feel the action. 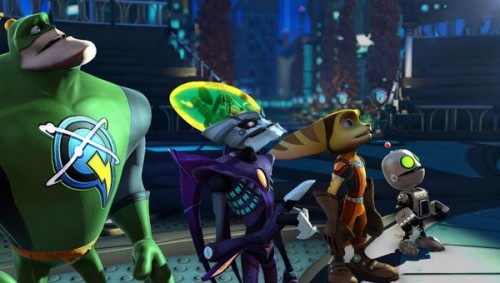 Since there will be players who want the single player experience, then the AI will be an important area for them. Fortunately, the AI is up to scratch. If one plays as Ratchet, then Clank is a worthy computerised friend… at times. Of course, there will be times where Ratchet and Clank will team up well. However, Clank will also go off on his own, leaving the player felling alone and cornered, resulting in death or near death. The co-op is done fairly well, with an added competitive point system, but there are no rewards for gaining the most points after a level.

The boss battles are somewhat average. The first boss battle is at the beginning of the game and felt underwhelming and anti-climatic. The ending of this boss battle sees the characters controls turrets and just shoot down generators (electricity seems to be a shield for the giant worm) and then just shoot him down with a barrage of bullets. They feel that they do not need any sort of strategy to take down these monsters. Just run through to the end and kill it. That is it. It is tedious and unsatisfying. Boss battles should make the player feel relieved and satisfied about destroying the danger. I was relieved that I finished such a tedious run.

Overall, the gameplay can be fun, but the camera can ruin the experience. Also, it feels like Insomniac wants to punish the player for embarking on a single player experience. The AI is not bad, but it can wander off, leaving the player vulnerable at times. The boss battles could have been executed better and the shooting mechanic feels poorly done. However, the puzzle and platforming sections are done right. 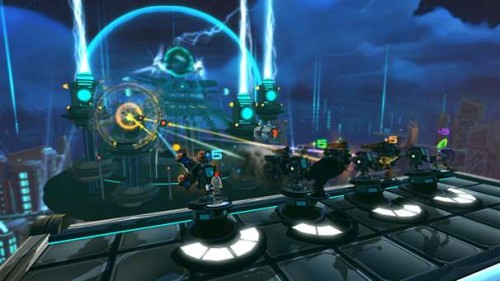 Visuals/Audio
The visuals give out a more cartoon look, something the series is quite well known for. The character models are colourful, but not sharp as they could have been. The environments are also in the same camp. They are varied in look and colour. However, like the character models, they are not as sharp as other games in this generation’s series. The design of enemies looks good and also varies from enemy to enemy. It isn’t bad looking, but the game could have looked a little better.

The music of the game isn’t bad. It is quite good, actually. The music usually fits the action on screen and happens to bring some of the charm of the series. One particular track in the game that deserves a mention is the main theme. This track is often used in the various tracks throughout the game and it is a track worth listening to. It is quite catchy and somehow fits with the overall theme of the game, which is quite good. Other than that, there is not much to say about the soundtrack. Sound effects and voice acting is quite good as well.

Overall
Ratchet and Clank: All 4 One is a great game to play with other people, but the focus on multiplayer gameplay does make the game suffer to an extent. There are issues with the camera and the lock-on system while the shooting elements feel redundant and tedious, along with the boss battles. The visuals and the music is also good but could have been a little better. Overall, this is a good game, but if it didn’t divert from its roots, it would have been better.