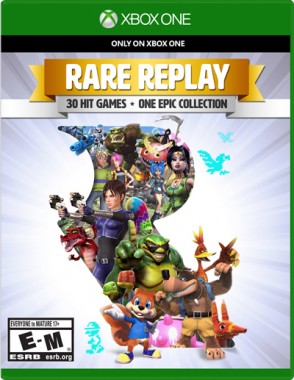 Rare ltd. is one of those gaming companies that is fondly remembered by gamers all around the world for one reason or another. Whether it is arcade classics like Jetpack or Attic Attack or the litany of classic Nintendo 64 games that they created, everyone has at least one Rare game that ranks among their top 10. Enter Rare Replay; a collection of games that spans the company’s impressive 30 year history. With an astounding 30 included games and a mountain of behind the scenes extras, there is definitely a lot to love In this nostalgic walk through history. 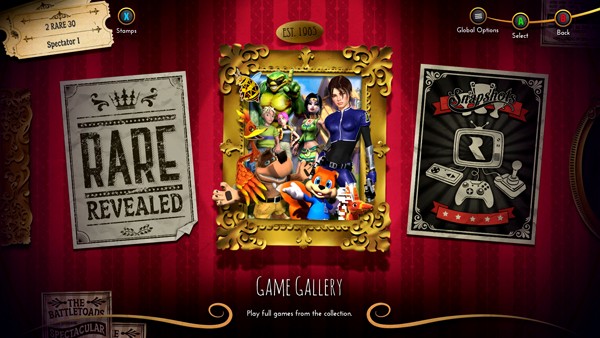 Rare Replay is a historical trip through thirty years worth of excellent game design and passion. Being able to boot up and play classics from as far back as 1983 is just amazing. Games like Jetpack, Sabrewulf and RC Pro Am really show us just how far we have come in the world of video games in such a short amount of time.

The collection opens up with Jetpack, a classic that anybody who has played Donkey Kong 64 will immediately recognise. You control a little astronaut as he tries to reassemble and refuel his ship while simultaneously fending off extraterrestrials who wish him harm. The game is simple to learn but difficult to master (as was the style of many games of the 1980s) but is still an absolute blast to play.

Let’s not forget that Rare Replay also features the infamous Battletoads and Battletoads Arcade. Battletoads was one of the most difficulty action games on the NES and its difficulty along with its badass, radical protagonists have solidified it in the hearts of games all over the world ever since (and a little Internet meme certainly helped that along the way. Well now you can legally play it again in its first actual home console release in decades. Not only that, but a new rewind option allows you to press the Left Trigger on your controller and immediately rewind up to ten seconds of gameplay, making it possible to overcome some of those challenging parts that stopped Gamers in their tracks for years. Battletoads Arcade is also included and this is the first ever time that the game has been released on a home console, so for many of us out there it will be the first time we have been able to try it out. 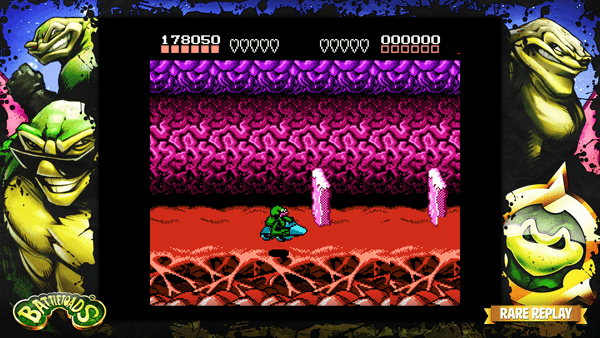 Once you get to the Nintendo 64 era of games you will find some classics like Blast Corps, Banjo-Kazooie, Perfect Dark and Jet Force Gemini. These games will resonate strongly with many of us out there who played them during their childhood. I for one could not get enough of Banjo-Kazooie as a kid, and while I never got a chance to play Blast Corps back then, I just know that 11 year old Andrew would have loved the mindless destruction that came with it.

When it comes down to it though, you can’t talk about the Nintendo 64 games in this collection without mentioning Conker’s Bad Fur Day. This was a game that at the time subverted everything that people thought they knew about video game characters and presented us with a cute cast of characters who drank, swore and did a whole lot of other unspeakable stuff. Rerelease on the original Xbox as Conker: Live and Reloaded, many players hated the unnecessary censoring of the game and were not fans of the updated multiplayer. Luckily the game they chose for the collection was the original version which while looking exactly like it did in 2001, still plays great and manage to keep the splitscreen multiplayer dream alive in a time where online multiplayer is king. 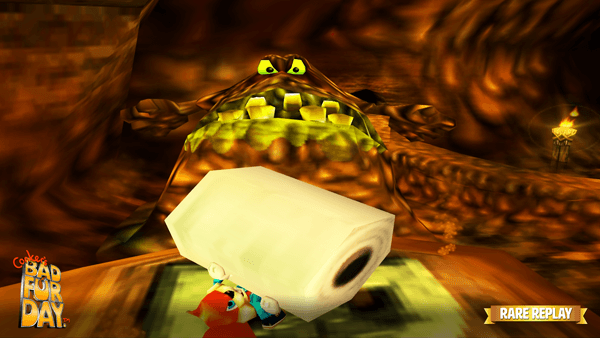 One thing that I wish this collection had was an easier way to understand what the games are, how they played and the objectives. Aside from simple trial and error there are built in game manuals for each of the thirty titles but these can only be accessed through the Xbox One’s game help “snapped” app. This takes time to load that could otherwise be spent playing the actual game, and if they simply moved these manuals to inside the game itself it would be a lot more convenient for players to get a grasp on what the heck they are supposed to be doing in Lunar Jetman.

In addition to the 30 included games, Rare Replay offers a series of bite-sized challenges for some of the older titles in the list. These challenges are called “Snapshots” and give your certain parameters in which to achieve your goals. For example; a Jetpack Snapshot has you gathering fuel for your rocket all without having access to your blaster. If these Snapshots have one failing, it is their inconsistent difficulty and an incredible difficulty spike in the final shot for each game. These will keep you engrossed for hours on end simply because they are so hard. The final Snapshot for Lunar Jetman took me longer to complete than the previous 9 Snapshots combined. 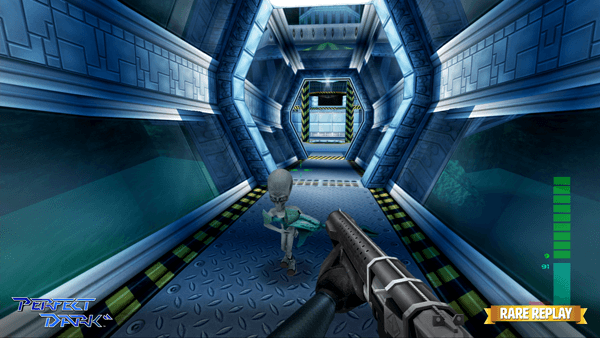 While it is awesome to see these older games getting some love, some of the newer games don’t fare as well, and this is a real cause for concern. Perfect Dark Zero and Banjo & Kazooie – Nuts and Bolts are two of the more recent games in the collection and they also happen to make use of Microsoft’s (currently still in beta) Xbox 360 backwards compatibility/emulation. Sadly, these two titles also suffer from really notable lag, screen tear and frame rate issues. Now Perfect Dark Zero had a lot of these problems in its original incarnation so it’s hard to point a pitchfork at it, but N&B is quite poorly emulated here, with some areas being so affected that the game becomes almost unplayable. Aside from these two, I didn’t face and performance problems with the other 360 games, but it is still a bit of a warning sign for the whole backwards compatibility program.

Hopefully come November when the program officially rolls out to a number of games, everything will be a lot smoother but at the moment the struggles to emulate a game from seven years ago have me feeling a little bit anxious for how well games like a Fallout 3 or Bioshock will run. 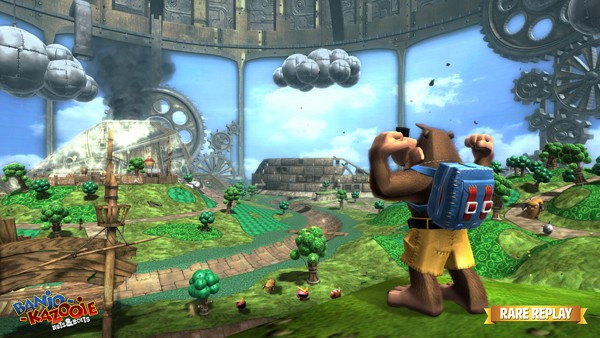 In many cases, we are dealing with some seriously old games in the Rare Replay collection, and you know what that means don’t you? That’s right, none of that fancy widescreen stuff that we take for granted. Back in the 80s, 90s and early 2000s games were made to be presented on almost perfectly square screens. Keeping with the authenticity (and because they would look like garbage if they didn’t) Rare has maintained the original aspect ratio for all of their games. Now this leaves a lot of empty space on the TV screen, which is filled up with images and official art from the game, almost replicating the old arcade cabinets that many of these games originated on. I personally think it’s a pretty cool visual treat but if it isn’t you cup of tea then you can switch it to a plain black background at your own discretion.

Do you remember being a child and your parents telling you to “sit back from the tv!” Or “stop playing those games, you’ll hurt your eyes!” I for one used to get those ALL the time and I never understood why. Well, thankfully Rare Replay has a sweet little feature that lets you, at the push of a button the screen will add an overlay that makes it look like it is being presented through an old 80s-era CRT TV. While I love being able to briefly look back in time to a bygone era before super crisp HDTVs, having that enabled for more than even a minute at a time caused some real strain on my eyes. 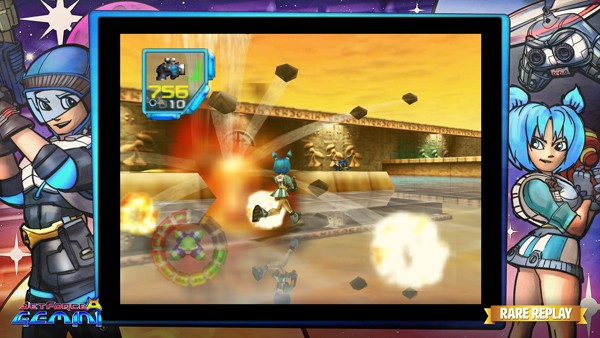 Getting 30 games for $50 (or $30 if you live in the USA) is almost unheard of in this day and age. Heck, many of the Xbox 360 games alone will cost you upwards of $10 or $20, so there is no arguing the amazing value that Rare and Microsoft have laid out on the table. If you’re anything like me, you will have had more than a few games on your “I really need to try that” list for quite some time and have been waiting for the perfect opportunity to do so. Well, Rare Replay is that perfect opportunity. Sure, a few of the more recent games have some performance issues but that shouldn’t hold you back from enjoying some of the classics like Attic Attack, Banjo-Tooie and the original slightly less-censored version of Conker’s Bad Fur Day.