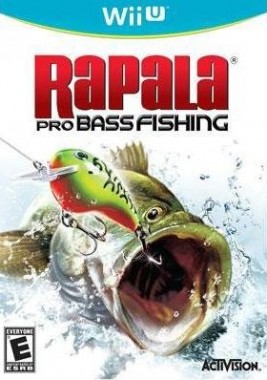 Overview
Fishing games have never really hit mainstream, making the brand one of the most niche markets in the industry. Sure, there have been successes like Sega Black Bass, but a good number of us just pass by the cover with the trout on it when we are walking by. Rapala fans know what they are getting with the franchise, and Activision want to make sure more is delivered on the Wii U this time around with Rapala Pro Bass Fishing. Now utilizing the Gamepad instead of the standard rod and reel bundles, this title looks to change the way we fish on consoles with a some interesting features. Does it land a big one, or should this fishing sim be sent back to the stream it came from?

Gameplay
The very first task Rapala Pro Bass Fishing asks of the player is to customize their fisherman. At first, options are few, but as the game is played – new clothes and accessories can be unlocked to better put the player in the driver’s seat of their boat. Once that is done, it’s time to take to the lake and do what the Rapala brand does best…fish! Yeah, this is your standard yearly fishing entry in the long-running franchise, but it certainly isn’t as boring as the real deal, and there are plenty of options and excitement on these waters to bring the great outdoors right inside your living room. 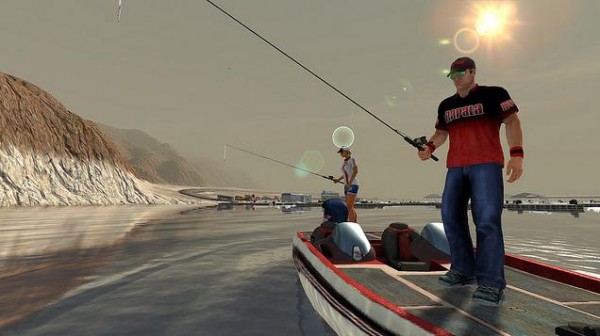 Once on the lake, players will take control of a boat. That is also the first time you will see a useful implementation of the Gamepad. For the most part, this controls decently enough, allowing the player slam on the gas pedal with the right trigger and move their vehicle by acting as if the controller is a steering wheel. This is the first game for the Wii U that has attempted the technique, and I must say – Rapala Pro Bass Fishing is one game that gets it right as far as Gamepad steering goes. The Gamepad also is your tackle box, radar, and customization zone as well, as nearly everything can be controlled by tapping on the menu on the fly. Want to see if a fishing spot is right for you? Just tap on the menu (or hit the appropriate button) to have your second screen become a radar (or Fish Finder, as the game calls it) and display the fish that lie beneath. The tackle box is also useful, but won’t come into play unless you are upgrading or changing out your gear. These menus all prove to be effective on the Gamepad however, and are sure to make any future champ’s lives a little easier. 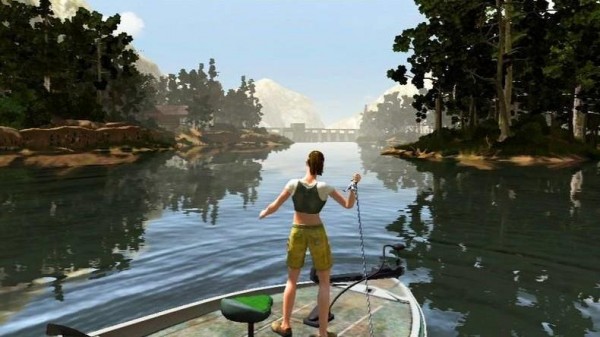 To cast your line, the player must use the analog stick to aim and move their Gamepad towards themselves and then move the controller downward, tossing their lure into the water. It really isn’t difficult to do, but the motion mechanics lack a bit of polish and can make the player have to re-cast several times before being successful. Jolting the Gamepad in a swift motion doesn’t cut it, as the line cannot cast if the movement is too fast. Going too slow is also not wise, as there will be a good chance you will undershot the target distance. Now, I understand this is not an arcadey fishing game like Sega Black Bass and everything is about simulating the experience, but those who are wanting to just hop in and fish will require some patience and a few practice casts to get that lure in the water. That said, once you nail it, these mechanics will become second nature and perfect casts will be made nearly every time. 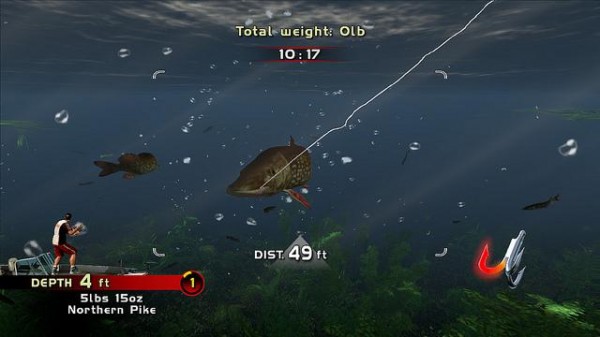 When that lure goes underwater, it’s game on and time to make a catch. All the player has to do is reel in the lure, attempting to catch the eye of some of the aquatic life that are passing by. Once the fish bites, a battle sequence begins and the player must keep their catch in the middle of the screen until it is reeled in. To do this, all that is needed is to tilt the Gamepad right and left (depending on the position of the fish), which tugs the line. Instructions will also be made to stop reeling in as well, but once the catch tires out, it becomes easy game and the chances of bagging what’s on the end of your hook becomes a lot more promising. At times, special bursts of momentum will become available to make the process easier, but snagging pounds of fish isn’t very difficult to start with as Rapala have made this control scheme highly accessible to all. 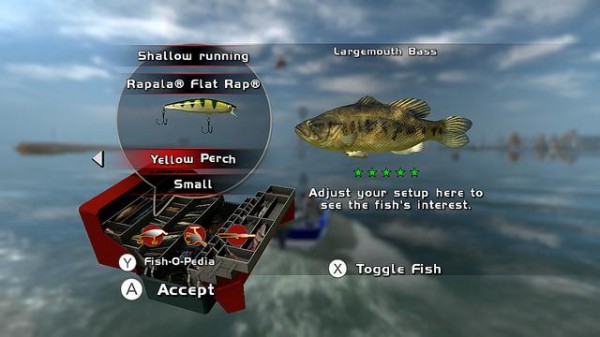 Yes, the controls all work and it is a blast to fish once you get the hang of it, but the modes within will give you the objectives needed to explore these watery locales with purpose. Tournament allows players to partake in…well, fishing tournaments, where one specific fish will be the target and the fisherman with the most pounds will move on further to the trophy. This mode is the heart of the game, and a handy Fish-O-Pedia has been added to teach us all about what attracts each species, the rarities of the water, and how to utilize your unlocked lures properly. Other than the competitive mode, players can relax and fish at their own pace in the Free Fishing, where all of those unlocks can be utilized at once to snag a monster. The variety is large, and as someone that doesn’t fish, I was a bit overwhelmed with all of the knowledge of the sport – but the optional hints do a great job at teaching newbies what to do during nearly any situation.

Visuals and Audio
It’s really hard to not spot a few flaws within this fishing romp’s graphical design, as the character models are a bit stale and the environment’s lack of detail do not capture these locations all too well as the trees and fauna seem a bit pixelated and bland. Where it matters however (the lake and the fish themselves), the visuals shine as the water looks highly realistic, and the fish are all well animated, featuring distinctly different designs in terms appearance, making it a lot more enjoyable to bag everything you may catch. 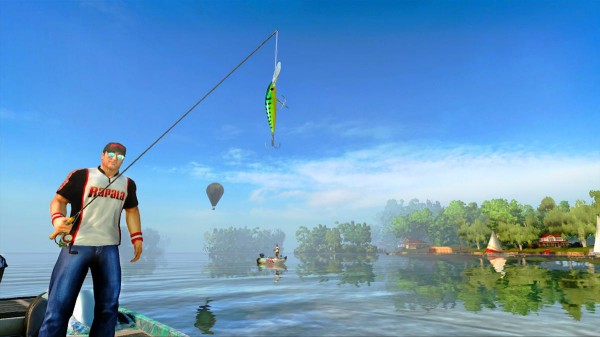 During the tournament, a commentator will call the action as it happens to bring out some excitement (and useful tips). The soundtrack as a whole is a bit forgettable and non-existent at times, but considering this is a simulation styled experience, one should easily pass that off and enjoy the simple sounds of nature.

Overall
Rapala Pro Bass Fishing is a well thought out fishing title with a lot going for it, but doesn’t really offer anything new to the genre aside from the Gamepad features. That is almost enough however, as no other launch title I have played thus far makes as much use of Nintendo’s new controller with the well implemented menus and motion control that have been added in to make the experience all the more realistic and convenient. Is it the best looking? Not quite. Master anglers and even junior fisherman should look no further however, as Rapala Pro Bass Fishing delivers everything promised and is well worth a look, even if you are a line-snagging land lover like myself.